Today saw the introduction of what was justifiably called “the most important product introduction of the 2009 North American International Auto Show”, the mostly-new, .25 coefficient of drag, Toyota Prius… Oh, the hell with that. You don’t wanna hear about the Pious Pod. You want pictures of beautiful women, exotic supercars, Nurburgring-veteran Vipers, bad-assed turbocharged Lincolns, and a half-million-dollar pair of Mercedes super-SLs… and we will deliver.

Let’s start with the Ecoboost Lincoln MKS. Want proof that Ford has the hottest hand in the business right now? Here it is: Lincoln just put a three-hundred-and-fifty-five horsepower, twin-turbocharged V6 in their biggest sedan — but they’re selling it to the Press As A Whole as a fuel-economy move! And they called it “Ecoboost!” And people are eating it up! Not everybody is a fan of the swoopy MKS, but here at Speed:Sport:Life, we’re solidly in the big Linc’s corner. Adding eighty more horsepower, a flat torque curve, and a little exterior jewelry just makes it better. We’re talking about a car which is bigger, faster, and lighter than the infamous “Ronin”-era Audi S8, available this spring at your local Lincoln dealer for the price of a loaded BMW 328xi. Sure, we knew it was coming, but the people in New Orleans knew that Katrina was coming, too. Trust us, the MKS is going to hit the ES350/Infiniti G35x market with hurricane force.

Lincoln also debuted the MKT. What’s an MKT? Well, it’s basically a Flex relative with outrageous styling, three rows of seats, a spacious, airy interior, and Ecoboost availability. Not only does it have a fair amount of cargo space when in five-passenger mode, the MKT is capable of towing, as well — we’re predicting a 4500-lb rating — so those of us who are pulling our race cars on an open trailer might find the MKT a very luxurious way to get to the track. It certainly offers a more reasonable package than a ‘Slade or ‘Gator, both in terms of space utilization and fuel economy.

On the way over to the General Motors press conference, which will be covered by “Lord” Byron Hurd later this evening, we stopped to see a very special Viper. Late last year, a small team of Chrysler engineers decided to take a shot at the Nurburgring “record” with a production-spec Viper ACR. Their time of 7:22 beat the vaunted racey-tire GT-R “prototype” and smacked up the Corvette ZR1. We don’t believe in ‘Ring records, but there’s no denying that the ACR went awfully damn fast. This Viper’s important to us. Not only do we love the Viper, there’s something fantastic about the skunkworks, low-budget nature of the SRT guys’ effort. So today, we requested some up-close and personal time behind the crowd barriers with the ‘Ring ACR. What’s it like inside? Entirely stock, with the exception of a Racetech seat which looked to be a 4009 W model or similar. To sit in the car and know that it is probably the fastest trackday production car in history… it was powerful. If you go to the show yourself, stop by and pay your respects.

If you’re smart, you’ll also stop by to see the future of low-end cars, courtesty of the Chinese carmakers BYD and Brilliance. BYD showed a small hybrid sedan which looked pretty much like an old Corolla with a battery pack… mainly because it was an old Corolla with a battery pack. The interior was a straight rehash of said Corolla, with the only difference being some plastics which probably wouldn’t quite meet US-market standards for “outgassing”. The dashboard was almost shiny enough to be used as a vanity mirror by the rather concerned-looking Japanese and Korean engineers who were crawling all over the car. Just as Toyota and Honda begin to feel the hot breath of Hyundai down their necks, surely Hyundai and Kia are starting to seriously worry about whether they can climb upmarket quickly enough to escape BYD and Brilliance. After all, the Chinese have proven to be the Michael Schumachers of races to the bottom; the US auto market is unlikely to stay an exception to this rule forever. 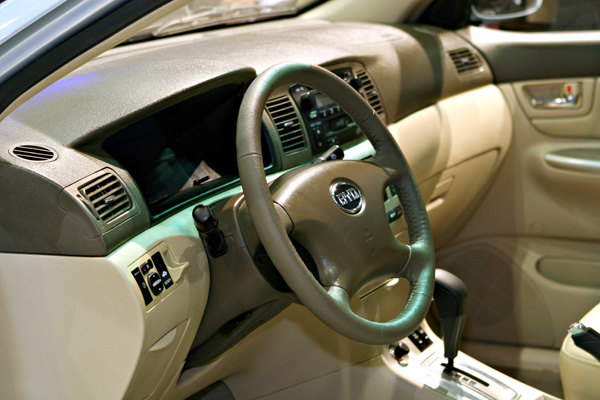 Speaking of cut-price products… Our friends from Maserati held a conference of their own this year. Last year they issued a stinging critique of the “mass wealthy” while promising that Maserati, as a brand, would be moving sharply upmarket, led by their sleek new Gran Turismo. This year the men from Ferrari’s budget brand had some good news to report. 2008 was a record sales year, due to strong interest in the Gran Turismo (according to Maserati) and the dealers’ willingness to pretty much call every number in the phone book offering five-figure discounts on the massive backlog of unwanted Quattroportes that clogged lots coast-to-coast (according to, ahem, reality).

For 2009, Maserati is offering the 4.7-liter engine for Gran Turismo customers who are tired of being dropped in a straight line by such mass-wealthy luminaries as the Audi S5 and the Dodge Challenger SRT-8. This improved engine will also be featured in Quattroporte inventory-clearance sales throughout the entire year, so stay close to your phone for a super lease deal on these “uniquely Maserati” vehicles, complete with “uniquely Buick” portholes.

In lieu of haranguing the assembled press with poorly-amplified, faux-aristocratic dialogue, Lamborghini decided to capture the show’s attention by running a “fashion show” this afternoon. This fashion show consisted of impossibly beautiful women wearing impossibly tacky Lamborghini-branded clothing while parading in front of three matte-finish mid-engine monsters. There was also one dude who was modeling. You didn’t need to face the Lambo pavilion to know when the guy was out on stage: the locust-swarm noise of shutter clicking slowed to a dim buzz whenever Italy’s answer to Derek Zoolander was striking a pose. Trust us, though: nobody stopped facing the stage until the show was over. What was the clothing like? Let’s put it this way: to wear some of the ladies’ pants, you’ll need to make an appointment with your local waxing provider. Hot stuff, and we have an unparalleled selection of photos for your enjoyment. 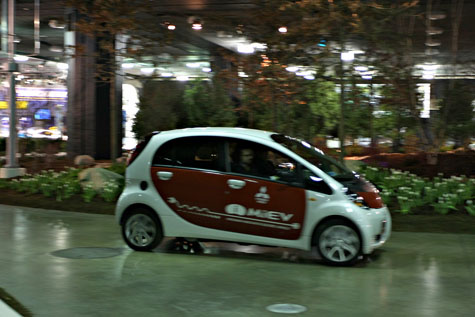 Photo Blurred Due To Extreme Speed

Our day concluded with an exclusive, high-speed, on-the-bleeding-edge limit of Mitsubishi’s new electric kei car. The “i MIEV” seats four uncomfortably and offers cargo room for one backpack. On the plus side, it will probably be the first genuine mass-market all-electric car offered for consumer purchase. Up to two thousand units will be sold in Japan during the second half of the year. Not “trialed”, not leased, sold, at a price of approximately thirty grand each. This is serious business, people. While GM continues to drag the Volt (now featuring batteries by LG) up and down auto-show carpets, Mitsubishi is gonna sell some cars. They won’t make money, they won’t change the world, but they are gonna make the sales. If we end up in an electric future, this is really where it begins. We drove the MIEV at speeds up to 20 km/h around a mulchy-smelling basement, and there was nothing exclusive about it, but something tells me that in years to come we’ll remember this as being the most important drive we took.

In the here and now, however, we’d cheerfully burn every electric and hybrid car in this country to the ground just to spend some on-track time with a pair of very special Mercedes SL models. The “Black Series” SL65 has been incompetently doddled around a safety-chicaned racetrack by some of our friends in the blogosphere lately; we’re envious of anybody who has a chance to steer this 661-horse monster, even if they suck and blow as drivers. Next to the Black Series we found an SL63 IWC Edition in a stunning matte-finished white. Is it an auto-show stunt? Nope. You’ll be able to buy it. There aren’t words for how fantastic it looks. $480,000 will buy you the pair. Or it would buy us the pair. Anybody feeling generous?