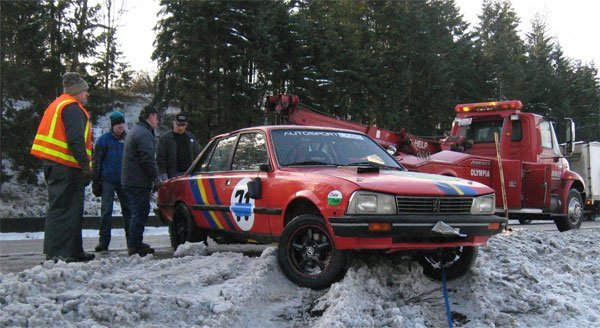 JL: Lots of countries besides France bent over and dropped trou for the Nazis. Why France. Why not the Czech Republic? Or, uh, Belgium?
Alan: Because there are a lot more French than Belgians so it’s easier to make fun of them? Actually I have a lot of respect for the French, I worked for a company near Paris for 6 months and had a great time. Of course some say that was where the brain injury that gave me an appreciation for French cars happened.
Guy: Belgium? Have you tried the beer those guys drink? Tough stuff. It’s easier to take advantage of a pinky extending wine snob.

JL: I’ll make pretend that you didn’t just say that. If you didn’t have your glorious (and quite debonair) Peugeot 505 racing machine, what other type of French beauty would you be driving?
Alan: If I had the money to ship one over from France I bet I could easily find a $500 Citroen CX over there. I remember finding one for $1000 back in 1990 and I can’t imagine that they have appreciated since then!
Guy: Renault R5 turbo. No question. Those rock!

JL: Calm down. I think we can agree on how very much German LeMons cars blow. How many lap penalties should myself and fellow LeMons Supreme Court Justice Martin give to German cars? Should the ubiquitous E30s get hammered especially hard? Or should all Krauts be punished equally?
Alan: I’ve thought about this long and hard and I’ve come to the conclusion that the problem with the E30 isn’t the car itself but the fact that there are so many of them. Thus I came up with the perfect penalty, make them add 50 lbs of weight for each E30 that shows up! If you have 2 E30s then each must add 100 lbs, 5 E30s and each must add 500, etc. That way not only do teams starting out will ignore the E30 but the other E30 teams will go out of their way to dissuade more E30s from coming!
Guy: E30s?? Pffagh! Where can’t you find a $500 E30? Each one should be given the Peoples Curse treatment BEFORE technical inspection and BS judging. Do not speak of them again.

JL: So, tell us about your amazing accident on the way down to Thunderhill.
Alan:  The only good thing about the accident was that I wasn’t driving. I’m still amazed that we all came out of it ok. We had been so worried about the weather and were quite happy that the roads were clear and we could drive at normal freeway speeds, what we didn’t count on was the fact that cities are warmer than the countryside and as soon as we left Tacoma we hit a patch of black ice and it was all over. To show it wasn’t just us after we climbed out of the wreck we saw a Grand Cherokee spin at the exact same spot [Ed Note: Sure you did] and into the median. Thankfully he wasn’t hurt and continued on but if it weren’t for the officer that positioned himself just before that to slow folks down we probably would not have been the only ones to have spun there. BTW one funny thing about the accident is that no one slowed down for the truck and trailer lying wrecked in the snow but as soon as the tow truck guys pulled the Peugeot out traffic came to a standstill. What, no one had ever seen a $500 Peugeot race car before?
Guy: It’s surprising how fast black ice can send you into a ditch. The only other time I’ve felt that puckered was when I jumped out of a plane. Watching the kaleidoscopic effect of the dirt, snow and horizon outside the windshield was both disorienting and pretty though. 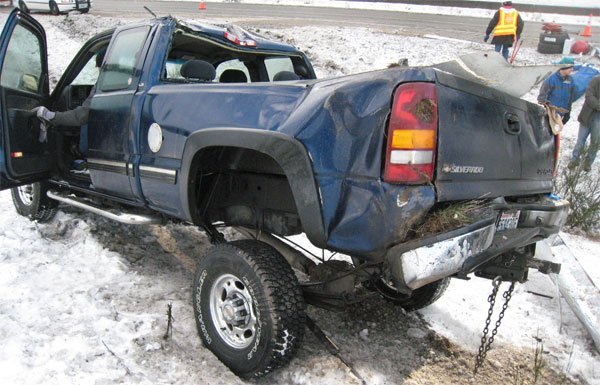 JL: If you guys can’t handle a truck and trailer (the entire state of Wyoming can, from birth) how can we expect you to do on the “race” track?
Alan: Hey, we’re from Seattle, no one knows how to drive in the snow here even though it snows almost every year!
Guy: Man. Run out of talent for just a second and you’re branded for life.

JL: Duh. How big an influence do you think your Peugeot is going to have on LeMons?
Alan: I think we’ll not only start seeing more French cars but cars from countries that you didn’t even know made cars! How long will it be before the first Hindustan shows up now that we’ve blazed the trail?
Guy: Oh, it’ll be the end of the E30 reign of homogeny, I tell ya. Next year everyone is going to be driving 505s baby!

JL: We can only hope. Speaking of pipe dreams, do you care about winning or winning the Index of Effluency? Or just winning the Fastest French Car award?
Alan: In my opinion French car owners are eternal optimists, glass half-empty people just aren’t going to be happy with a car full of odd gadgets that even the guys who built it don’t know what they do. So since we’re crazy enough to buy the thing in the first place we’re also crazy enough to think we’re going to win! (well, the IOE at least…)
Guy: Do I care? What would be the point otherwise? We’re out to win all 3. 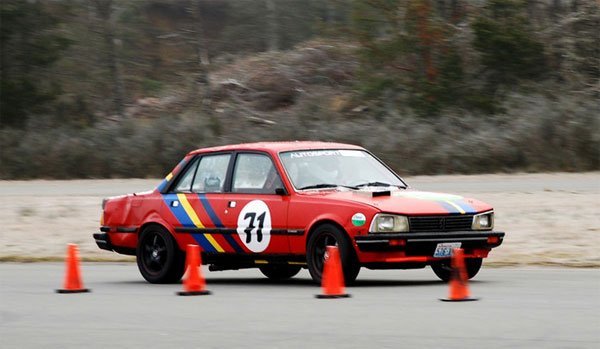 JL: Good luck with that. Charles de Gaulle said, “La réforme oui, la chie-en-lit non.” Do you agree? Or do you shit your bed?
Alan: I think that’s “La réforme oui, la chienlit non“, lol. But I’m not 100% sure I agree with it, a little chaos can be fun, right?
Guy: We will be reforming E30 drivers by not taking shit from them. My own personal bed is free of shit. What’s your home address again?

JL: My address? Y’all best be packing hella bribes. That said, I’m a betting man. I’d lay 50 to 1 odds that you crack the top 10 at Reno. 200 to 1 that you win. And 35 to 1 that you finish. Care to comment?
Alan: Hey, I’ll take your money if you’re offering those odds! I think we stand a good chance of finishing but I wouldn’t wager an old-style franc about the car making it more than half an hour before the first electrical gremlin appears, I swear the whole electrical system in the car is one big house of cards and as soon as one component fails some apparently unrelated item will go south with no explanation. Thankfully with French cars electrical problems tend to fix themselves as mysteriously as they happened but then of course some other completely different part will fail!
Guy: I’ll take those odds, care to wager a 30 year old bottle of fine French wine? We were saving it for a bribe, but this sounds MUCH more satisfying.
JL: No, We’ll just take it as a bribe, se vous plait.

For more about the Cheese Eating Surrender Monkeys, check their blog.