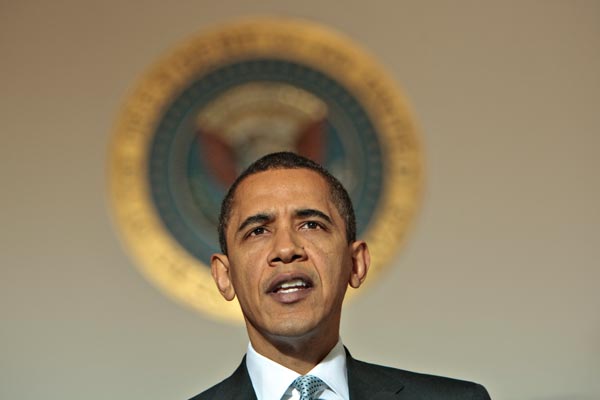 Last night, news hit the wire that President Obama’s Auto Task Force found GM and Chrysler’s restructuring plans to be insufficient. This morning, Obama will delineate exactly why Rick Wagoner was asked to resign as GM’s CEO, why GM will receive operative funding for 60 days as it races to hack off even more of its limbs, and why Chrysler has 30 days to hook it up with Fiat or face death. Talk about a shotgun wedding. Let’s liveblog.

[10:08 CST] Obama enters the foyer, greets the cameras with “Good Morning, everybody.” For who? [10:08 CST] Obama cites Michigan’s 10% unemployment rate. “The pain being felt in the industry… is not the fault of the workers. They work tirelessly… ” “Rather, it’s a failure of leadership, from Washington to Detroit, that led our companies to failure.” “We’ve reached the end of that rope. We cannot, and must not, and we will not, let our auto industry vanish. It’s an emblem of our spirit.” [10:10 CST] Re: Chrysler and GM’s submitted plans: “Neither goes far enough to warrant the substantial new investments that these companies are requesting. ” If Obama is to be believed — that the American carmakers won’t be allowed to fail — perhaps the “go back and try again” drill is a dog-and-pony show… maybe they need to posture and rattlebang and demand concessions/rolling heads before doling out any money to avert public backlash. [10:12 CST] “If we are each willing to do our part… ” So, Chrysler’s part is to merge? Half of Chrysler’s survival isn’t even up to them? [10:13 CST] “Some of the cars made by American workers are now outperforming the best cars made abroad,” Obama cites the 2008 NA Car of the Year, and Buick’s reliability. [10:15 CST] GM has made a good effort to restructure in the past months, but their plan is not strong enough. Wagoner’s resignation is not meant to reflect on him personally; Obama gives Wagoner a shout-out. Obama says Wagoner’s departure is “a recognition that it will take a new vision and new direction to create the GM of the future.” The cliche “steady at the helm” is obviously unemployed these days, too. [10:16 CST] “It is with deep reluctance but also a clear-eyed recognition of the facts that we have determined, after a careful review, that Chrysler needs a partner to remain viable.”  Obama calls Fiat an “International car company,” not an Italian state-supported automaker. Fiats are reliable and modern vehicles, I’m well-aware. Still, it’s absolutely surreal and, frankly, hilarious to hear Fiat presented as anybody’s last hope. BTW, you’re just now coming to terms with Chrysler’s insolvency… you’re just now sad that your 300C’s parents are going to die? Anyone with even a passing interest in the industry saw the writing on the wall years ago. [10:18 CST] Obama seems to really pitch this bankruptcy strategy. He could be priming the nation for the most important bankruptcy it’s ever seen. How will they get debtor-in-possession financing? [10:19] “Starting today, the US Government will stand behind your warranty.” Why is that not reassuring at all? If every Chrysler dealer in the country shuts down, will Barney Frank re-time my Hemi Charger? [10:20] Obama pitches new tax breaks that let car buyers write off the sales tax of their buy; hopes that such legislation could sell up to 100,000 cars. Seems like a drop in the bucket. [10:22] “I got my start fighting for working families in the shadows of a shuttered steel plant”, says Obama. I’d probably rather have someone that is shocked and disgusted by shuttered plants, rather than jaded to them, fighting on my behalf… [10:24] Obama, for the third time, expresses his hope that American companies will “return to ingenuity” that they once had. Why don’t we have a dialogue about Washington’s failures? Why is a GM/Chrysler survival wholly and completely in their hands if the government admits its own role in this crisis? Sure, GM suffered from poor management and product planning decisions — and those largely ceased a decade ago. Once again, there is no mention of the one-way trade door. At some point, asymmetrical trade has to factor into this dialogue.

Is it too early for a Shiner?

[11:55 CST] White House Press Secretary Robert Gibbs answers writers’ questions about Obama’s speech. A journalist begins by asking if we are on the path to the government running the auto industry, since the government is calling shots and has veto power over their plans. Gibbs doesn’t think that assessment is fair. “We’re going to take measures and steps to protect taxpayers, as well as seek the best solution to get these automakers on a path to long-term viability.” Well… how much weight will government suggestions carry? [11:56 CST] Journalist: Do government-backed warranties apply to only Chrysler and GM vehicles, or to foreign makes with plants here as well? Gibbs has to double-check. That’s terrifying. [11:57 CST] Gibbs says the notion of Wagoner’s ousting as a ‘quid-pro-quo’ is inaccurate; the Task Force merely asked for Wagoner’s resignation and GM agreed to it. Uh… what was GM supposed to do? Defy the Task Force’s request and kill their chance at aid? [Noon CST] Journalist asks, “Why the disconnect between tough talk in the auto industry and no talk in the financial sector?” Gibbs sidesteps, reiterates support for the domestic industry. Journalist reiterates question. Gibbs “uhhs” a lot, sidesteps, “uhhs” more, laughs. Brings up the warranty. Oh boy. [12:05] Journalist: What happens to GM if no resolution is reached in 60 days? Gibbs: “I think what the president has asked GM to do is to re-plan and come back again, we’ll certainly make a determination.” WTF. This secretary is still less disgusting than Ice Queen Dana Perino, though. “The president today proposed a plan that will… put us in a position to be strong again.” Are you kidding? Gibbs, have you had any sleep, bro? The President didn’t put forth a plan. He doled out petty cash and asked for a clean-sheet restructuring of GM. [12:08] Journalist: What was it that the administration saw in Fiat, who couldn’t compete in the US? Gibbs: Their international turnaround. I laugh. I feel like crying. I never had that Shiner. I wonder if an armored Flex with a turret would be sexy. [12:10] Journalist: Now that the government axed Wagoner, should other employees watch their backs? Gibbs: Obviously, everyone needs to keep the taxpayers’ interests in mind and use their funds wisely. Essentially, Gibbs said yes. Come on. [12:12] Journalist: Did the President accept all recommendations of the Task Force or selectively accept some and reject some recommendations? Gibbs: The President has spent a lot of time in extensive meetings, he’s briefed daily. Where is the beef in this answer? [12:14] Journalist: Did the financial companies have strings attached to their money? Did they have viability timetables? Gibbs gets nervous, interrupts journalist… the conversation gets extremely heated… kind of ugly. Gibbs: I think there are general viability tests going on right now, in the form of health assessments for banks that the Reserve is conducting, to understand the worst-case scenarios in that sector. “We are trying to get a full and complete assessment of what is out there.” Please start by getting a clue. [12:17] Journalist: Is Obama’s warranty pitch a precursor to a bankruptcy? Gibbs, a little too alarmed, a little unconvincing: “Nooo!!” Gibbs plugs Jeep, loved his once upon a time. Oh my. [12:19] If so many journalists are calling the White House on their discreppant treatment of finance firms and auto companies, why isn’t that discreppant attitude reported in the media and commented on by pundits? Journalists at this press conference are irritated at the double-standard. Will it show up in their coverage? [12:22] Journalist: “Do you prefer the language that Wagoner was asked to leave or told to leave?” Gibbs: “We asked and he agreed.” Come on. Just admit it. Another journalist: “Who asked him to leave, was it the President?” Gibbs: “I’m not going to answer that.” Journalist: Why not? Gibbs: “Because.” NEVER an acceptable answer. Let’s audit this guy. [12:23] Journalist: Why did Wagoner go and Nardelli stay if both submitted non-viable business plans? Gibbs essentially says that Chrysler’s only way out is an alliance… I’m taking a leap and inferring that means Nardelli’s exit is inherent. [12:25] Journalist: Are you acting tough because taxpayer cash will be lost in an imminent bankruptcy? Ouch. Gibbs sidesteps. Ugh. [12:27] Journalist: What will GM now be able to do that they weren’t able to do with Rick at the helm? Gibbs: Now, they’ll give us a stronger business plan. Except Fritz Henderson created the rejected business plan… and Fritz Henderson is now the CEO at GM… [12:29] Journalist: Why didn’t Obama appeal to Americans directly to buy American cars? Gibbs: “In his remarks, he mentioned.. I don’t want to turn this into an advertisement… but the Chevy Malibu was the 2008 NA COTY, and Buick was tied for first in a recent dependability study.” “These companies have taken big steps in investing in the cars of the future… in showcasing what is possible… and we should not in any way minimize that.” [12:31] Several minutes ago, Chrysler posted an announcement on their media-only Firehouse blog that an alliance has been reached with Fiat. Gibbs does not seem to be familiar with that development. It is, frankly, unclear whether Chrysler is talking about a new level of agreements or is talking about the memorandum of understanding that was reached weeks ago. News as it breaks… [12:36] Journalist: Does the government have a contingency plan for Chrysler’s death if Fiat walks away? Gibbs: If Fiat doesn’t come forward in 30 days, somebody else might. It’s important to wait for that window to pass before we speculate. Well, I’m going to speculate… does this mean that the 30 day deadline isn’t as hard as they claim? [12:38] Journalist: Will the government propose or approve GM’s new board members? Gibbs honestly doesn’t know the answer to that question. Again… oh boy.

With that, we’re done.