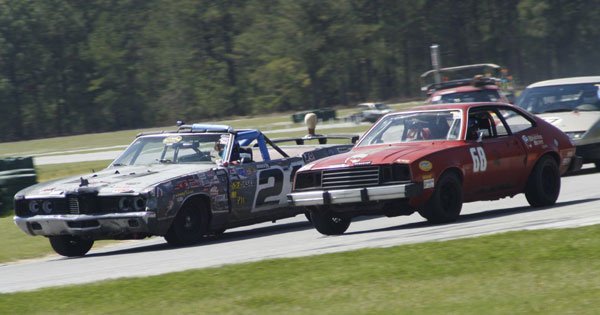 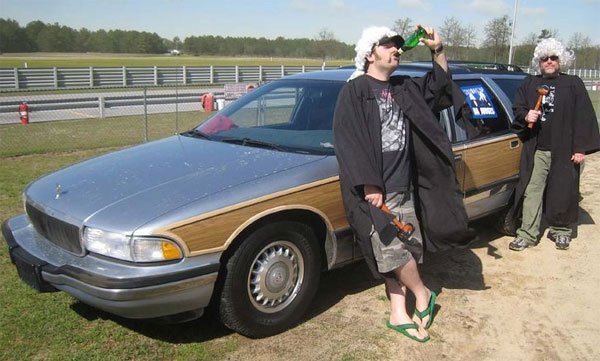 Having fully sobered up recovered from last month’s Houston Gator-O-Rama, Judge Martin and myself were dropped off by Chief Perp Jay Lamm and welder to the stars Arc Angel at the Canada Racing Bungalow across the street from CMP. Waiting for us was not only a quart of bourbon, but our very own for the weekend 1996 Buick Roadmaster woody wagon complete with a newly rebuilt LT1. As well as “Here Comes Da Judges” stickers. You should be jealous of me, yes. After an epicurian feast and much loquatiousness, your judges headed to the track to see what was up circa midnight. As it happened, drunks! But not too many of them. Just one team, really. And after pre-refusing their offer of both a midget hooker bribe and a gentlemanly game of beer pong, we retired for the evening, slightly broken hearted at the lack of pit row action.

That worry proved to be short-lived. 94 cars in various states of grime and decay descended on Kershaw, South Carolina. Judge Martin and I had to subject them all to our now patened form of Bullshit Inspection by the end of business, Friday. Gulp. Luckily, the LeMons Judicial system is all about innovation (assuming that it’s about anything at all). For instance, some sort of Kia rolled through and we just gave them a “flying zero” in terms of laps. Because really, they have enough problems. We also walked a 1972 Ford LTD right through because… it’s a 1972 Ford LTD. Other cars had bigger problems. The all-too-typical Spec Miata showed up (222 lap penalty) as did a might-as-well-be Spec E30 (125 laps). My favorite had to be Team Hammer’s Heroes and their E24. Team leader John Hammer was dumb unfortunate enough to post the following on his blog:

The BMW is now in the capable hands of Billy Revis. Billy owns Motorsport Connections in Mooresville & Winston/Salem. He’s also a former Speed World Challenge racer. Yeah, he knows something about making a car work.

Dropping your car off at a speed shop? Oops. We printed out and produced the offending entry and confronted John with it. He had no good excuse. 100 laps. 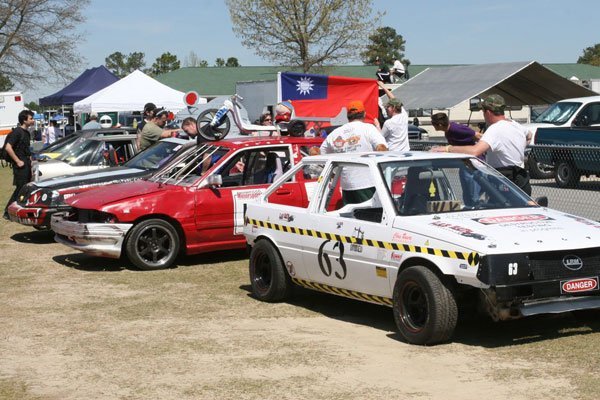 The nonsense continued. Team Superkak Racing showed up with the same NASA champ Mustang Racer as last time — a car easily worth $3,000. Only thing is, their team captain is a little smarter than everyone else and back in July he presented us with the best documentation we’d ever seen. Still is. Sure, they spent $2,500 on their uber-cheater Fox ‘Stang and its rodded 347, but they sold off over $4,000 worth of parts. Assuming they were still in negative land, the Superkakers went ahead and spent an additional $310 dollars between the last race and this time. Only thing was, they didn’t bother to read the rules this time. See, after each race, you need to email Chief Perp Lamm a photo of your post-race car and he assigns you a residual value. If Jay says your car is worth $190, then you can spend $310 on your racer. If he says it’s worth $499.93 (like he did to Team White Lightning and their hella-cheating FC RX7) than you can spend seven cents (White Lightning opted just to glue the money to their hood).  Judge Martin and I decided the Superkak Mustang was worth $400, which put them at $710. That’s $210 over, AKA 21 laps. As you may know, their fellow competitors dinged ’em a bit harder than that.

The BS Inspection continued with plenty of “Wang dang mang, I done sold this car to myself for $0 — Dat’s cool, right mang?” lame excuses and the guilty parties got hammered by our Mallets’o’Justice. The excuses cam fast and spurious; luckily so did the bribes. Thanks to the stupid global economic meltdown, cash bribes were a little lighter than we would have liked (especially considering the 401k replenishing bonanza we experienced in Houston) but the booze-kickbacks were up. Way up. I would like to give a special shout out to all the kind Southern dandies that provided me with a bottle of 12-Year-Old Dewars Reserve (the fake $159.99 pricetag was a nice touch) and the 14-year-old Oban, respectively. Judge Martin is quite stoked with his 12-year-old Glenfiddich and 7-week-old Limoncello. We also experienced a bumper crop of moonshine, some of which was really fantastic. Of course some of which wound up dumped into various fuel cells come Sunday. Lamm and Co. even established a Moonshine Cup, and even though the Jake Leg and temporary blindess haven’t quite subsided, I seem to recall the Volvo Amazon driving Tuna Chuckers won that competition. 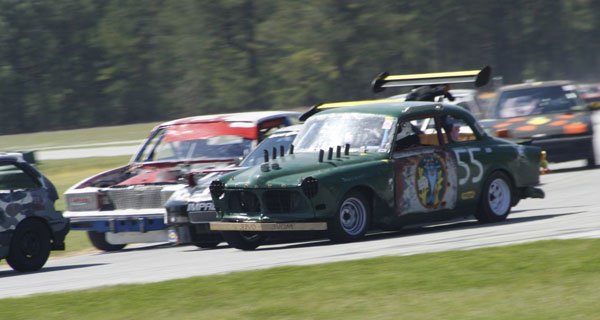 A few special shout outs before we move on to Saturday’s racing action: some group of MENSA candidates decided to write “Genrah Ree” on the side of the Honda. Bad news for them is that LeMons second in command (or is that third?) Nick Pon is half Asian. Duh oh. Those of you that can remember the past know how we deal with perceived racial epithets here at LeMons. These clowns didn’t. Not only that, they hailed from Georgia so we made them write, “Ulysses S. Grant #1,” “I [Heart] Abe” and my personal favorite, “Sherman Was Justified” on their car. Tee hee! Also memorable was dumping all bad beer bribes over the bribees’ engines. I am a Certified beer judge, after all. And when has Michelob Ultra (shudder) ever been a good idea? Friday night was spent swilling Team Dos Boot’s yummy homebrew and sucking on excellent pork ribs. Judges need their strength.

As a LeMons Supreme Court Judge, I sadly don’t get to watch as much as the race as I’d like because most of my time is spent busting bad drivers’ asses. Considering the black flag bonanza of the last two races (288 black flags at Arse-Freeze-Apalooza, 250+ at Gator-O-Rama), I was thinking I’d be lucky to watch maybe five minutes of on track action. Unbelievably, and most certainly miraculously, these here Southern racers managed to run a largely penalty free race. In fact, it’s the least penalized LeMons race I’ve ever seen. I would guesstimate less than 100 black flags in all. As such, I got to watch several dozen sets of brakes go up in smoke, countless spins, crunches and thrown rods that make the 24 Hours of LeMons the world’s fastest growing motorsport event. Of course we did spent some time punishing people. [Quick Update: Here’s almost all the penalties in video form compiled by Judge Rahul] 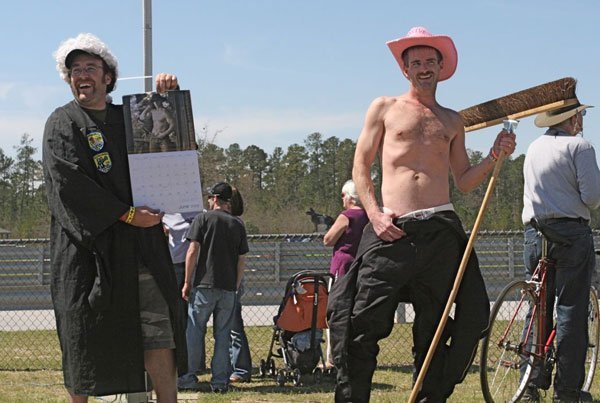 As the South is home to so many military bases we figured a march was in order. We waited for a few cars to smash into each other (a short wait, to be sure), lined up the offending teams behind our righteous judge mobile and cruised the pits. With Judge Martin at the wheel, I was left to sit on the Buick’s tailgate, megaphone in hand and lead the cadence call, “I don’t know what I been told, passing under yellow’s getting mighty old. I don’t know but I done heard, metal on metal is plain absurd. Julio Iglesias, jacked off in outer spacious. I don’t know but I done read, four wheels off will get you dead.” And so on. That was much fun.

In fact every time two cars came in for metal on metal contact, we instantly taped the drivers’ legs together for a three legged race. This involved them walking the length of the paddock and retrieving items from the snack bar — with a receipt! — for our hungry, hard working crew. Of course, nothing satisfies the whiny-little bitches some people have other ideas. “Can’t we just hug?” pleaded one member of the now infamous Tuna Chuckers. Sure I told him and proceed to tape him and the other driver up belly to belly. Then, when my back was turned, another Chucker cut them loose. So, I added him to the party. A third Tuna Chucker began yelling at the driver from the other car that the contact was the latter’s fault. He got himself taped up, too. That’s three Tuna Chuckers and some other poor guy. Then I sent the four of them stumbling off to embarrass themselves in front of others. We also put together a five legged race (four bad drivers) that got us two OJs, one black coffee and one coffee with cream. And a receipt! It was fun for all watching these guys trying to move. Yes, I love my job. 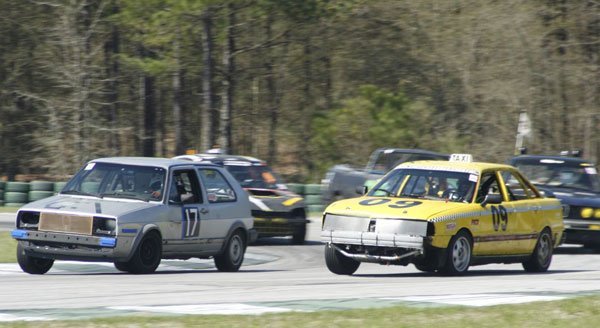 There was much more judicial capriciousness and cruelty to be sure (Bobby Bosch Relay Race anyone?), but cataloging it all here would take several pages. Besides, you should of been there. The racing I did see was good. The action lulled enough for me to see the Schumacher Taxi Toyota FX16 totally bone it cut turn one a little sharp and wind up on his door after flipping on his roof. Driver walked away. I also got to see the Racing Nemo E30 ignore a parked Ford Thunderbird, two yellow flags and a debris flag then rear-end said broken down Thunderbird at about 40 mph. Both teams featured heroic wrenches and were back on track within hours. Both drivers were totally fine, too. However, we made the lady driving the Nemo BMW perform a variety of sobriety tests before we let her go racing because crashing under yellow is just, um… There’s no excuse for that. My favorite task was making her close her eyes and count to thirty silently. It took the driver 27 seconds, which is actually excellent. Try it yourself. Sober. And then I saw what happened to the Kudzu Kommandos’ E30 after they pointed their exhaust tips at their gas tank. Hint: heat plus fuel equals KABOOM!!! That driver was also fine. In conclusion, some team won the race (who cares?), the totally 100% amazing Turbo Schnitzel guys (thanks for the brats!) and their simply wretched Merkur XR4Ti won the Organizer’s Choice trophy and Team Heavy Metal with their glorious ’72 LTD took home the all important Index of Effluency. Awesome job, guys. See the rest of you slobs next month in Reno! 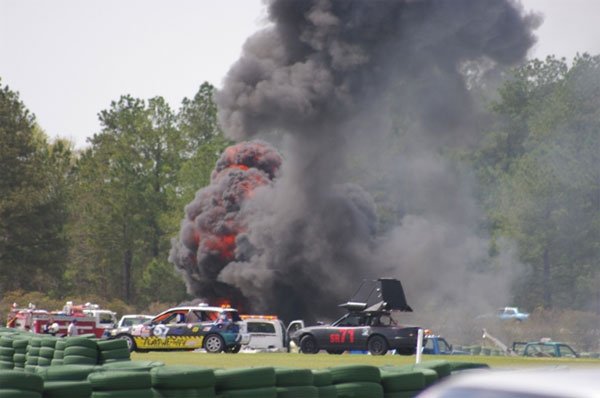