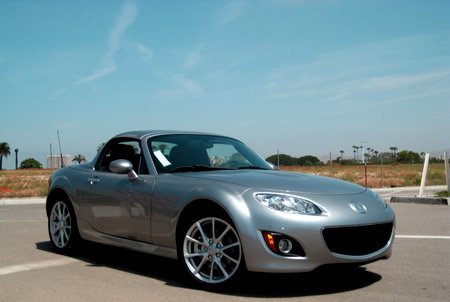 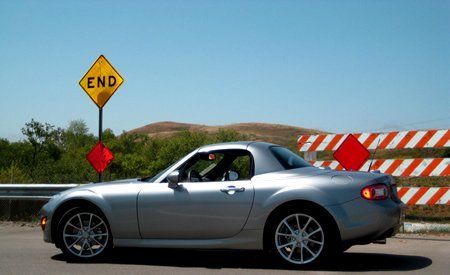 Looks lean and mean from the side - don't peak around the front or the illusion is destroyed.

I said “keys in hand” but I should have said key fob in pocket because this is the top of the line 2009 Mazda MX-5 Grand Touring PRHT (Power Retractable Hardtop) and it features a remote keyless entry system. Instead of a traditional lock and key on the column, you twist a plastic knob to start the car. I would have preferred a nice big red START button, but this knob works just fine and won’t scare away those afraid to move to modern technology.

Once I settled into something resembling a driving position, I found the interior to be just the right mix of simple and necessary. Basically, everything I want and nothing I don’t need – all within easy reach and laid out in a way that makes sense. The radio controls were within easy reach in the center stack but I could also control it from the steering wheel. The heated leather seats were supportive and comfortable, which is a necessary combination in a modern sports car. 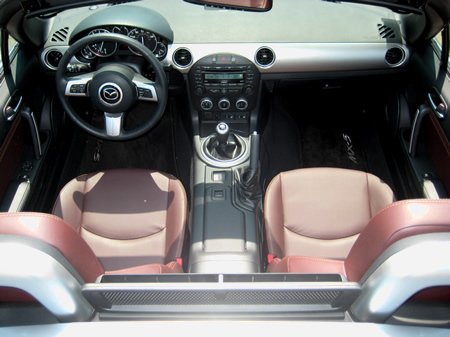 The interior of the MX-5 has the perfect blend of driver-focused tools and modern amenities that make it a great daily-drivable and capable sports car.

One thing that was disappointing when driving the MX-5 was the amount of wind noise coming in from the open window when the top was up. Thankfully I could turn the sound system up and it would stay crisp but at any stop light I would have to turn it back down unless I wanted looks of disapproval from the soccer mom in the Navigator to my left and the smug guy in the Prius on my right. Though I guess they could have easily given those looks to each other. Either way, as soon as the light turned green I was first away from the light with a smile on my face and the newest Kanye West/Jay-z collaboration being turned back up to cover the noise of the rushing wind. 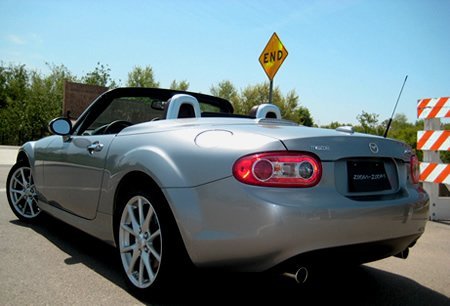 Top-down motoring is a blast in this MX-5, and the Power Retractable Hardtop opens and closes quickly and easily at the push (and hold) of a button. 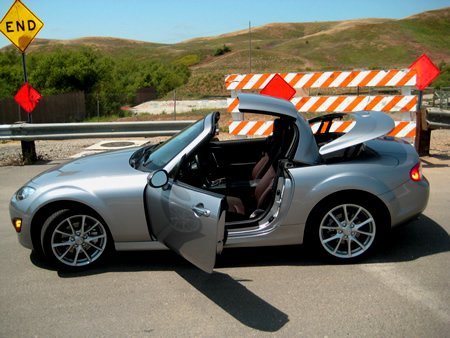 “Excuse me while I whip this out…”

I was not surprised by how much fun I had in the MX-5 during my week with the car. I was also not surprised that my back and neck hurt by the end of that week… this car is simply not made for someone 6’3″. However, this is not the Mazda’s fault and I hold no ill-will towards the leather seats which were actually quite comfortable on parts of my body that were not being bent into a Cirque Du Soleil level of flexibility. The 2009 Mazda MX-5 is a true sports car with great amenities for daily driver use. If I were a shorter man I would love to have an MX-5 in my driveway.

For more information on all 2009 Mazda cars and trucks visit NADAguides.com, the vehicle pricing and information leader since 1933.