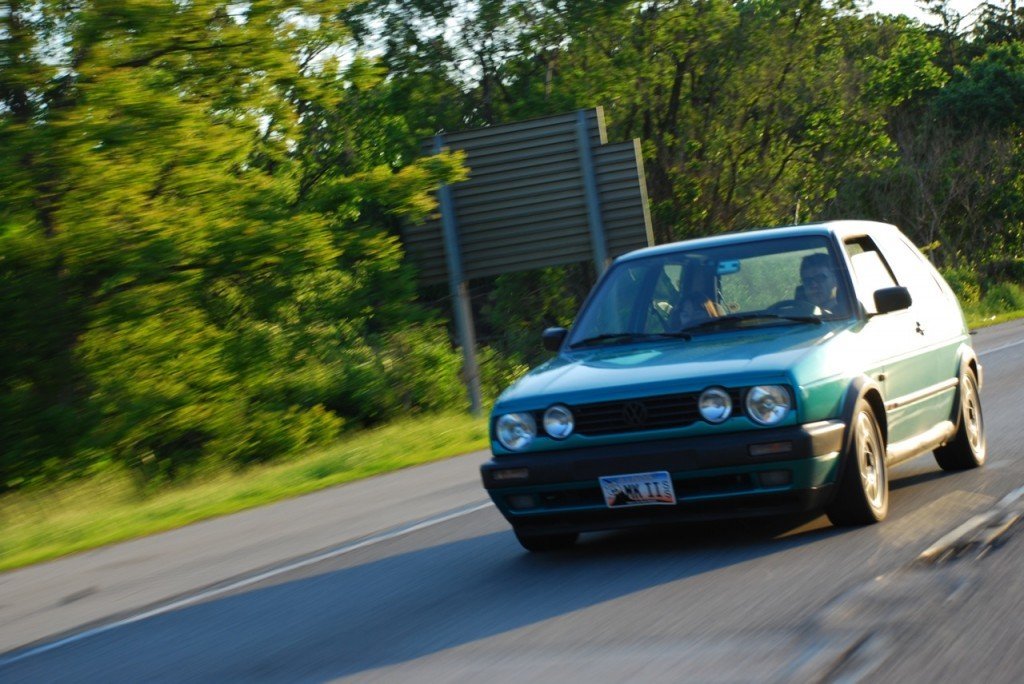 Every once in a great while, one comes across a writer with a truly unique voice. Cherise LaPine Grueninger is one of those writers. Unfortunately, she and I spent the first few years of our acquaintance sparring over various issues related to auto enthusiasm in general and the VW hobby in particular. I’m pleased to state that we have now resolved these issues, almost entirely through a rather craven capitulation on my part and that as a result, Cherise will now be contributing to S:S:L on a recurring basis. Please make her welcome in this, her first column, as she details her love affair with a second-generation VW Golf — jb

I come from VWvortex, where “speed” and “sport” fall by the wayside in pursuit of “life,” and maintaining the illusion of such.

As a contributor to said site, I was dazzled by the privileges granted to the motoring media. There was something quite fabulous about driving around media cars with cling stickers of the media house’s name and logo on the windshield. And I’ve driven my share, through generosity, negotiation, and subterfuge. A long-termer is even better? It’s always there when it’s needed, insurance is covered by the manufacturer, and just when it’s worn out its welcome, it’s spirited away and something new comes along as a replacement. It’s no wonder that some auto journos allow the reflected glory of a freebie-laden lifestyle to plump their vanity more than a little bit.

I’m vain as well, though not beyond my means? I’ve been a slave to second-generation Jettas and Golfs for ten years, always interested in the relationship that develops between a car and its owner, a relationship that’s impossible when cars are whisked in and out so frequently they’re nearly indistinguishable. So for the past few years, I wrote most of VWvortex’s features, a wholly unglamorous role that afforded me the luxury and pleasure of exploring these dynamics in depth. And thus, I consider myself proficient at the “life” component of our shared affliction of car lovers, that is, owning a particular car. The type of ownership that requires maintenance and insurance. I know, it’s not just for cars. Any vehicles, be it private or business, require proper insurance and maintenance done properly. Road risks are serious and taking applicable insurance can help with the issues. That means several automotive insurances, including for-hire livery coverage like NEMT insurance can be leveraged accordingly to the individual or business needs. Anyway, I am glad that I have insurance. Buying a car comes with its fair share of trials and tribulations for sure. Managing the finance part of it often has people stumbling and falling; whether the car is being financed through car loans, bridging loans, some other type of loan, or through hard-earned savings, it can be an overwhelming investment. But once it’s been made, there is definitely a relationship that develops between the owner and the car, as it has happened with me. True ownership is an emotional investment as much as a financial one; a fleeting sense of pride is its sought-after payoff.


I didn’t scout out perfect photogenic cars, but sought owners who would give me a worthwhile story. My subjects often showed a bit of reluctance. If a VW captured my attention, chances are its owner had mixed feelings about his or her investment; often they asked me if the sacrifices were worthwhile. It seemed an absurd question?as a result of these car projects, mother/daughter and father/son relationships were developed, Internet fame was achieved, and lifelong goals were fulfilled.

Yet my own relationship with my car deteriorated, because my quest to investigate those other relationships drained me. I simply did not have the time, the strength or the money to continue my project. Driven by a need to justify the incomplete state of my own car, I was able to convince myself it was some form of martyrdom on behalf of the greater good of the VW community —that, and I was contractually obligated to make appearances with a new addition to my household’s fleet. Modifying your car with other peoples’ money is loads of fun, even more so than flogging press cars, but this privilege was short-lived.

It wasn’t always this way; like most of the people I’ve met, I had grand delusions of owning a full-fledged, fully-restored show car. When I lived in New England, I had a dedicated (and decrepit) winter car and actually managed to avoid exposing my GTI to snow and salt; when I reached 25, I decided to take on a car payment for the first time. Both of these illicit lovers are gone and sorely missed, and the GTI has taken a much more realistic role in my life.

It was nearly seven years ago that we found each other. Heartbroken over the premature death of my beloved ’92 Jetta, I spent weeks looking for a suitable spiritual successor, found in a Montana Green 1991 8v. I saw the color and simply had to have one, and had the foresight to know that I’d never be respected as a car chick unless I learned to drive a manual. I located the perfect car, happily overpaid on eBay, and my course was set.

Content with a low budget build, I found my stride one upgrade at a time. The “OEM-plus” method, where a car is modified by adding parts designed for higher-end versions of that same car and/or different model lines, lends itself especially well to slow progress; everything works together, but nothing is out of place alone. I’d go to shows and pull into the lineup, proud and eager to discuss my latest escapade or newest modification, only to be blown away by the big-money projects. I learned quickly to be content with my achievements and play to my strengths, and instead of competing at show after show, I poured my energy into writing.

Perhaps the best way to explain my GTI’s significance is to illustrate its role in wholly unexpected situations. This car has contributed to the demise of a relationship, found me a husband, and inspired multiple stalkers to trail me home. I don’t know if I would have landed at Speed:Sport:Life on my own, but luckily the GTI attracted one final stalker, who happened to be one of this site’s editors, and the rest is now history. It really made me think I might need something similar to this reverse phone lookup on the off chance I began getting calls.

Though my professional relationship with Jack has been short, our acquaintanceship has long since been tinged with liberal doses of mutual admiration, mutual disdain, mutual get-the-hell-over-yourself. It wasn’t until recently that our interests aligned and we had an opportunity to meet. He asked if I would bring my GTI to a TrackDaze event at Autobahn Country Club?after all, he had a soft spot for the MKII, of course. What harm could come of it, really? I knew I’d be subject to the notorious once-over in which he appraises cars, clothing and chicks. If I could handle it, the car certainly could. We’ve helped each other through much worse.

It didn’t matter, anyway; if I wanted to go, I didn’t have a choice.

It’s my only fuckin’ car, I thought.

“Of course,” I said. “It’s my only car.” The day arrived, and like I’d done thousands of times before, I pulled through the gate, evaluated my surroundings, and parked strategically. My girl must have passed the test. That afternoon, Jack suggested I come out, in the GTI of course, for track time this fall.

I guess you missed the part when I said it’s my only fuckin’ car.

I smiled coyly and declined politely. “Thanks, but I promised my car I’d never do that to her.” Never underestimate the power of playing hard-to-get.

In the spectrum of project-car parents, one would probably find me close to the side marked “overprotective”. The emotional cost of replacement is far more significant than the actual financial data would show, not to mention the fact that most of the OEM and OEM-plus parts I’ve acquired are simply irreplaceable. It’s tough enough to find regular parts for an eighteen-year-old car. Yet I drive on the sprawling mess of Chicago’s tollways and interstates every day. A closed course might be safer — I’ve heard the lectures, thanks — but I don’t get to work on a closed course.

Don’t get me wrong; I’ve thoroughly enjoyed my minimal time on the track, I understand its value, and I’d love to learn to race? and I will, someday. My life is full of “somedays,” and as a woman who loves cars, those “somedays” fall within a strange hierarchy of priorities. I’ll own my dream Corrado, a 1994 Canadian-spec Ice Grey Violet SLC with the same purple and teal striped gray cloth Recaros I managed to source for my GTI; that is, when I have access to covered storage. It’s so far in the future that I’m sure no one will remember the Corrado SLC except me. But that’s okay, because by then I’ll be over the idea of owning another VW; given better resources, my attention will shift toward serving and servicing a carefully-chosen, come-hither Lotus the way only a Lotus deserves. In my dream scenario, with more glamour in my personal fleet, the GTI can finally become a true garage queen.

And I’m annoyed with myself, constantly, for aspiring to own more irreplaceable cars. Therein lies most of the strife of my adult life?almost every decision is made in context of the GTI’s well-being. Were it not for pure emotion, she’d be long since gone, perhaps sold to my ex-boyfriend, who for years generously and without (much) complaint helped me limp her along on a tight budget. Another potential buyer wanted me to remove the utterly unobtanium “Digifiz” cluster so she would pass inspection, and take off the super-rare OEM wheels because he thought they were ugly. I stayed awake nights, weighing my options, trembling over the idea of a mercy killing: drive her into Lake Michigan so I can say a clean goodbye, collect an insurance check and buy something much more practical, like a Miata.

My 20-year-old econobox exacerbates my vanity, but not without reason. We complement each other, we suit each other, we deserve each other. We bask together in the infrequent yet intoxicating attention she earns. Find me another MKII Golf about which the same could be said. There aren’t many left. I’ve looked. My dear, darling GTI is my partner in crime as we chase down life, or something like it. Someday I might be brave enough to street-park her in Chicago, in pursuit of something pretty or interesting; someday, my life might be balanced enough that the benefits will outweigh the risks. I’m not afraid to make promises, though, which I keep. She will never see a track.