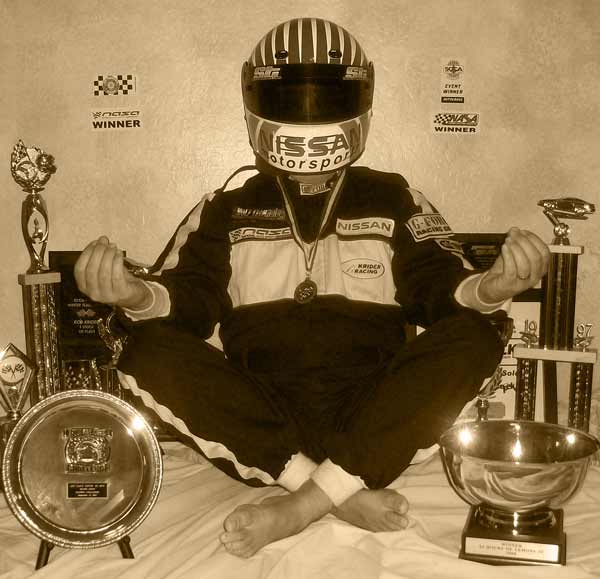 So, you watched Travis Pastrana in his Subaru at the X Games and now you’re convinced that you can get your Mom’s Outback at least six feet off the ground if you were just given a dirt jump and the chance.  Well, it’s time to put down your PS3 game controller, turn off MotorStorm, and borrow a helmet.  Rallycross is the closest thing you’re probably going to get to the X games without any money or talent.

Rallycross is similar to the more popular autocross, based on the fact that there is one car out on the course at a time racing against the clock.  The course is delineated by cones in a large empty area.  The important difference is that Rallycross is a race on dirt.  Yes, you and your car will get dirty.  The other main difference between the two sports is your autocross time is based on your single fastest lap around the track (like qualifying), whereas Rallycross is set up like a stage rally.  Each lap is a separate stage, and each stage counts toward your total and final time.

As a total newb, I made the mistake of blowing a muddy corner at a Rallycross and sliding off the racecourse.  I had to go into reverse (once I finally found it, Goddamn Volkswagen!) to get back on the track.  I lost a crap load of time farting with the tranny, but since I was a seasoned autocrosser, I really didn’t care.  “I’ll get ’em on the next lap,” I said -wrong!  That was when I learned the all important lesson about Rallycross, every lap/stage counts.  Just like in the bigs, like in the WRC. 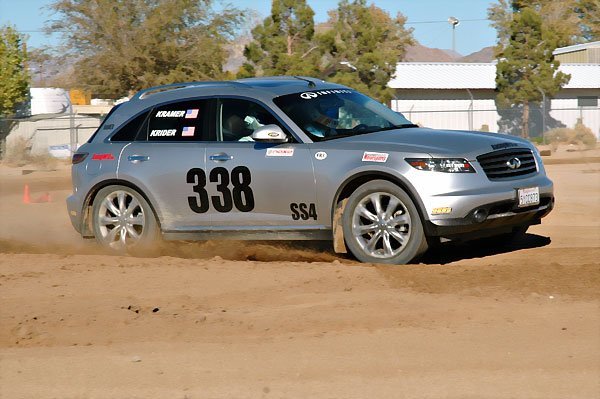 Rallycross is done on the dirt which is appropriate because the sport is dirt cheap.  You’re looking at about $25-40 per day of racing for entry fees.  You need to supply the car; almost any car will work (except for you guys who cut the springs out of your Civics after watching the Fast and the Furious).  Cars with standard street ride height seem to fair the best.  If your car is in the weeds, there is always the rental route.  Some guys like to rent-a-wreck and then pull an L.A.P.D. on the rental cars -which means “beat and release.”  Like most activities with a car you need a state issued driver’s license and a helmet (M2000 is good to go).  Rallycross clubs are sort of on the ground floor these days so loaner helmets aren’t easy to find.  Grab that helmet your uncle bought for his Harley but never uses.  If your uncle is being a dick about the helmet, then I/O Port Racing Supplies can get you a heck of a deal on an inexpensive one (www.ioportracing.com).

FRX, Formula Rally X (www.formularallyx.com), NASA, National Auto Sport Association (www.nasaproracing.com), SCCA, Sports Car Club of America (www.scca.com) all hold similar versions of Rallycross.  The rules between each club are pretty much the same.  Some clubs have more classes (SCCA) and some clubs will really work with you so you can get any car into some type of class no matter what hunk o’ junk you show up in (FRX).  Formula Rally X is the only club that doesn’t require a membership to participate, however if you are a NASA member you get an entry fee discount (racing coupons, yay!).

If you want to feel some adrenaline, just slide a car sideways at about forty-five miles per hour while kicking up a rooster tail of dirt behind you.  It’s awesome.  Rallycross is all about sliding.  Rallycross courses are designed for drifting front wheel drive, yes I said it, front wheel drive cars, around corners.  The pressure of getting around a twisty dirt track with almost no traction as fast as possible without making any bonehead mistakes (like sliding off the course like me) gets your blood flowing.  It’s racing, it’s dirty, it’s a good time. 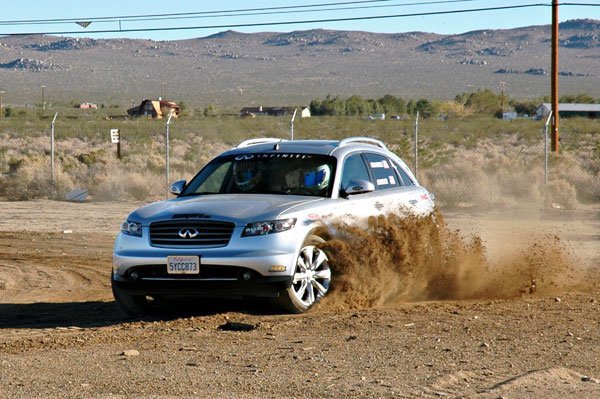 With one car on track at a time and nothing hard to hit other than some orange cones, the car wear is pretty limited.  However, the amount of car wear at a Rallycross is directly dependant on your right foot and the chemical balance in your brain which measures the “I want to win at all costs” factor versus the “this car has to get me to work tomorrow” factor.  I’ve seen cars at Rallycrosses upside down.  I’ve seen oil pans ripped out from under the cars.  I’ve seen numbers of tires pulled off their beads.  This is off road people.  Ruts, and dips, and rocks can do bad things to the undercarriage of a car.  Lesson here, take it easy and leave the red Monte Carlo Rally Limited Edition Mini Cooper S at home.  Bring the Rabbit (and two spare tires).

Because the tracks are set up with cones, the tracks are always changing, which means on your first lap you don’t know where to turn left, or is it right?  Get there early and walk the course.  Some clubs will do a low speed parade lap around the track while driving the cars.  Just like autocrossing, half your day is racing and the other half is working (chasing knocked over cones).  When you work a Rallycross course you get the joy of eating dust as each car goes by.  Go ahead and invest (about $2) in one of those dust masks for painting houses.  Everyone working the course at a Rallycross looks like their trying to fend off SARS or the Swine Flu.

You are going to get between 3 to 5 shots at the course (depending on the club or the event).  Go fast, but don’t go too fast, remember every lap counts so any off course blunders will haunt you and keep you far from the trophy table.  You won’t have much time between runs to re-bead your tires (but I’ve seen guys miraculously pull it off with a little compressed air and a jack).  Stay off the cones, at some events they are worth a 5 second penalty added to your overall time.

You will be running with guys in your class, similarly modified vehicles classed based on two wheel drive or four wheel drive.  Which ever class you’re in, try to avoid going on track right after the water truck, although sometimes it can’t be avoided.  The water truck is a necessary evil at a Rallycross.  It keeps the dust down, but it makes the course as slippery as snot.

These guys and gals like their rally racing.  Rallycross brings a mix of people from the rally side of things, the autocrossing community, even Baja 1000 teams, all with a single love for sliding in the dirt and kicking up dust.

The guys from Formula Rally X also like their Micro Brew.  After a recent event, the entire crew of competitors took over a Mexican restaurant and the beers and bench racing flowed for hours.  I’ve noticed that Rallycrossers relish their dirt.  If a Rallycrosser was a character from Peanuts, he’d be Pig Pen.  They don’t spend much time keeping their cars clean (for good reason) and the fleet of Rallycross cars are a little rattier than that of road race cars or autocross cars.  However, Rallycross cars still look new compared to any Hobby Stock dirt track roundy-round racer. 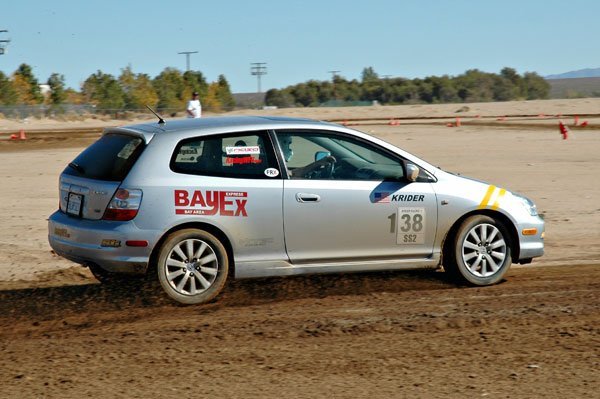 This is a relatively new sport.  It’s one that hasn’t had each class taken over by some rich guy who can afford a new Porsche every year to easily win the national championship.  Anyone could rise up and be the man in this world of racing.

Like most motorsports, tires is the name of the game.  They actually divide some of the classes up based on the tires you use.  Purpose built rally racing tires put cars in the “rally” classes.  There is a ton of debate over which is the hot tire for the “stock” car classes, and the measurement between tread blocks has to meet a certain minimum to be considered legal for the class.  There is no real proven formula (car/tire) to winning at Rallycross.  The dirt and lack of traction is a great equalizer.

But the guys who win swear the whole thing is done by left foot braking.  If you’re anything like me, your left leg is a clutch leg, and any attempt to use the clutch leg on the brake pedal only results in stopping way too fast and throwing a passenger through the windshield.  Go-Karters with their fancy European left foot braking skills would probably do well here.

Let’s review the Racer Boy gauge cluster and see what we got:

Fuel gauge is just an eighth of a tank shy of full because you still have money in your bank account.  The racing is inexpensive.

The tachometer is at 5,500 RPMs because this racing is a lot of fun.  Sliding cars sideways in the dirt brings a smile to everyone’s face.

The Speedometer is around 53 mph because the racing is safe.  There is nothing to hit except cones.  You can hit yourself if you’d like, but I wouldn’t recommend it.  Cars do very, very occasionally end up with the shiny side down.

The volts gauge is low because this is low impact racing.  You drive your street car to the event, punish it, and then wash the mud off using a quarter machine (word of advice, the pay and wash guys don’t like it when you leave thirty pounds of mud in the washing bays, so… hit them late at night when nobody is around).   Before you know it you’re back home and behind the computer posting/bragging on dirtyimpreza.com in no time.

The mileage is at around 5,000 miles.  Rallycross isn’t that hard on your car, but then again, it can be tough on the undercarriage and suspension.  You’ll probably rack up 5,000 miles worth of wear in about 5 miles worth of driving.

So, hit the links, find a race close by and head to the track.  You can get dirty too.