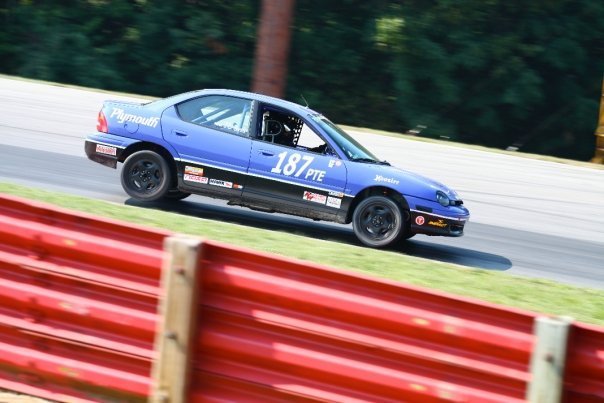 With apologies to Charles Dickens, that summarizes succinctly our weekend long adventure with what I am coming to realize is a race car with manic depressive disorder.

This past Friday night, over pizza, we had every reason to be optimistic about our prospects in the car for Saturday. After weeks of work in fixing, preparing and upgrading the Wonder Neon, it had shown every indication of being ready for battle. I’d picked up four seconds a lap since the July race in a car that was quick, balanced and drivable everywhere. Friday’s four sessions had been a blast; even at the end of the day on tired, hot, worn Hoosier tires and running at least 200 pounds over race weight, I’d pulled a time in the final session equal to what had previously been unobtanium for me. The car was solid and had run all day without a flaw. 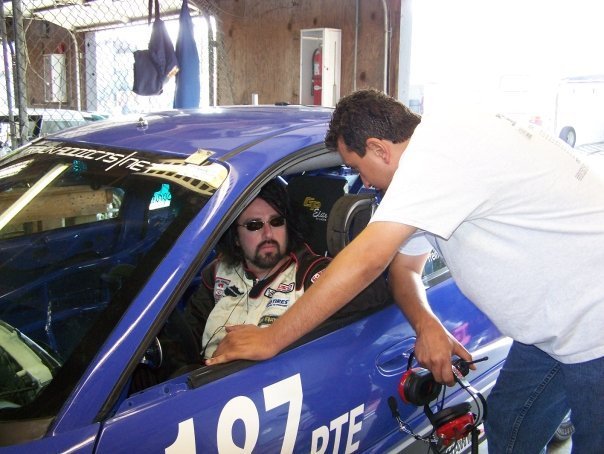 Jack Baruth, our team driver, was going to love it, and we were sure that he’d be significantly faster, as usual. Finally, we’d brought a car that could potentially match or even exceed the straight line pace of the Hondas, and for which we’d gone through and done all possible maintenance. We were ready and it was ready. All we needed to do come Saturday morning was set the tire pressures and go have a great weekend.

Morning warmup went well, though Jack’s times were not as quick as we’d hoped. The air/fuel tuning changes we’d made didn’t seem to be going in the right direction, and the car had lost some speed on the straights. Corner grip was also a bit of a question, as we were running on a set of year old Hoosiers that had probably seen their best days some and go.

Still, we were certain that we could get the tune back to where it had been most effective, and we had a pair of brand new tires ready to be mounted on the front for Sunday. Things still looked good, though we were under no illusions of being able to keep up with defending National Champion Steve Eich’s Sentra down the straights. The Nissan SR20 engine is an 800 pound gorilla under class rules; our hopes were simply to get closer than we’d ever been.

In qualifying, Jack found the fastest time the car would see all weekend — a low 1:45, or roughly two and a half seconds faster than my best Friday time, good for sixth on the grid. Frustratingly,it was atill a half a second short of the best time he’d run at this same track in July, when the car had significantly less power. More worrisome was that our tuning adjustments to the engine computer weren’t behaving consistently. The computer was changing the tune throughout the session, sending me on a chase through the wiring harness and settings in search of a source of the problem. All in all, it was costing us 3mph down the back straight, which is the difference between passing and being passed.

The tires were a second source of concern. After qualifying, it was very clear that they were spent, so we made the decision to run the race on my tires from Friday, despite their narrower section width. The upside was that this freed Jack’s wheels for have a new set of front tires mounted, making us ready for Sunday. The downside was that Jack would need to manage these narrower tires more carefully during the race.

One of Jack’s greatest strengths as a driver is at race start, and he rarely disappoints. Hopefully, he has Flip video of the Saturday start (I don’t – jb), because it was certainly one of his best. Going into the first corner, he’d moved from sixth to third and nearly slipped into second past Eich. Brian Makse, in one of the world-conquering Civics, quickly ran out ahead of the melee forming behind him, building a solid lead in the first several laps, with Eich giving chase. Jack, Eric Waddell (Civic), Faisal Ahmad (Civic) and Robert Keller (Miata) continued to wage war over third through sixth, with cars trading places lap after lap. For several laps, Jack fended off Eric with not only great race tactics, but something we’d never had before over any of the Hondas — power! Keller finally started pressuring Waddell, but while that was happening, Faisal caught Jack on the next straightaway.

For the remainder of the race, Jack and Faisal were engaged in a nose-to-tail contest over third place, with Jack just holding off every passing attempt and gambit Faisal could throw at him at they cleanly moved through lapped traffic. Jack wasn’t going to be passed, and Faisal wasn’t going to go away. Meanwhile, Brian had amassed a seemingly insurmountable lead, but then inexplicably tangled with a lapped Miata, going off track and coming back on in second place. 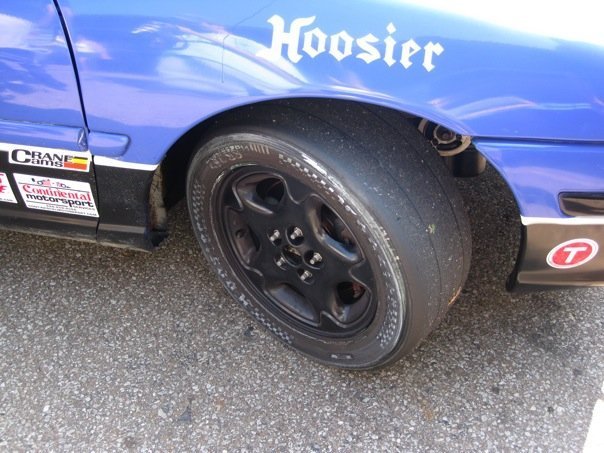 Jack and I had been on the radio the whole race while I spotted from the tower, so I let him know. From my vantage point, I could see Jack carry his lead on Faisal through turn 1, then up towards the Keyhole, then down the back straight, vanishing from view until the bottom of the Esses, and then over the radio…screaming.

Which is the only repeatable part of the conversation, in part because that’s when Jack’s radio died.

Somehow, someway, something had happened with just a few turns left. Jack took one final shot at him in the Carousel turn coming on to pit straight, but there was nothing he could do. Fourth place was all we’d get.

While I was heading down from the tower, the radio was cutting in and out.

“…accelerating by itself…” is all I caught, which is universally a bad thing.

“Just kill the ignition. Can you slow it down?”

Silence, then beeps, then enough voice snippets to indicate that he was still running around out there somewhere. Finally, the car came into the pits, alternately popping, backfiring and revving to redline. Obviously, we had a problem. The large amount of oil all over the back of the car would indicate that we had at least two problems. A scraping noise as the exhaust dragged along the paddock pavement would be a sign that there’s now at least three problems. Wacky, inconsistent readings on the wideband sensor would lead one to believe that we now had four problems.

Fourth place and a broken car wasn’t exactly what we’d had in mind when the day began, but all was not lost. You see, the race was over, but it wasn’t over. Confused? So was everyone involved. We’ll get back to that.

So, back to the garage with our broken car. Lifting the hood revealed all sorts of horrors, despite the fact that Halloween is more than two months away. The most obvious issue was the oil sprayed everywhere. A level check revealed that we were down a quart, and it was pretty obvious where it went, as the entire engine bay was drenched. It appeared to be blowing out of the crankcase breather tubes.

The next issue was the idle air motor that had just broken into pieces, for no apparent reason. Perhaps it was having problems at home. Whatever the motivation, the end result was that it appeared to have caused the car to lose power, costing us third, then accelerate uncontrollably. Things aren’t always what they seem, though. We’ll get back to that also. 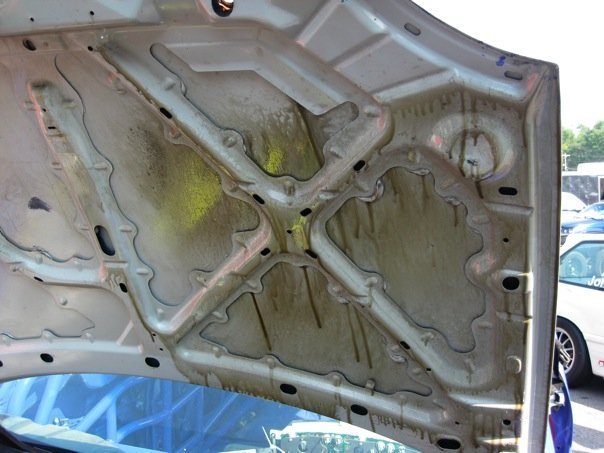 Looking at the mess in front of us, Jack asked if I thought we should just pack it on the trailer and take it home. I dignfied that suggestion with a snort. As long as you can find a Home Depot, an Autozone and enough duct tape, you can fix anything.

One of the nice things about racing a Neon is that every auto parts store in every podunk town in the Midwest has parts. Need a wheel bearing in rural Virginia at 10pm on a Tuesday? Yep. Just don’t show up at 10:01. How about a master cylinder in Mansfield? Uh huh. What about an idle air control valve?

“Oh sure”, said the retired Marine Lieutenant Colonel manning the parts counter. “Got one right here.” as he turned around and plucked a box off of the shelf. Nice. Try that with a Turbo Supra, Porsche 911 or Corvette Z06. Yeah, didn’t think so. Some creative shopping at Home Depot yielded a selection of materials suitable for MacGyvering up some catch cans for the oil breathers, along with the requisite roll of duct tape. We’re in business.

While we were returning to the track, Faisal called and told us that he’d picked up Jack’s third place trophy.

Remember how the race was over but not over? We’re back to that. The first bit of post-race dramatics involved Brian’s incident with the lapped Miata. Race officials decided to bring down the hammer for “avoidable contact” and disqualified him from his second place finish, moving Faisal to second and us to third, hence the trophy.

While we were up to our elbows in Neon repair work, word began to circulate that there was a tech inspection issue with Eich’s first place car, and that it might be above the horsepower limit for the class. Not altogether surprising, given the straight line speed that thing had. Eventually, we were told that he’d been disqualified and that we were now in second place. Not a bad move, considering that the race had been “over” for three hours. At that point we realized that if it weren’t for an oddball broken part, we might have won the race. We consoled ourselves by taking Faisal’s second place trophy, since he was getting a better one anyway.

By 10pm, we’d wrapped things up. Crew Chief Matt Johnston and I had successfully employed a catch can solution involving three feet of clear plastic tubing, a pair of pipe fittings, hose clamps, two empty oil containers, a couple of feet of duct tape, a number of zip ties and two small K&N filters. Photos of the contraption are floating around on various Facebook pages, I am sure. The IAC was an easy fix, as was the dragging exhaust. For good measure, we changed out the ECU, since the old one appeared to be a random air/fuel ratio generator. For those of you reading who are not technically inclined, that gets filed under “very bad”.

We’d even mounted the new tires on. All the car would need on Sunday morning was a quick tire pressure check and it would be ready for morning warmup. Just like it was Saturday morning.

So, by Saturday night we had a second place trophy and a car ready to race on Sunday. Given the events of the day, that seemed like a solid acheivement. We were still missing some outright speed in the car, but with new tires and a computer change, the future looked bright….like a mushroom cloud.

By 11pm, I was in bed and drifing off to sleep. My final thought was the realization that we’d been in such a hurry that we hadn’t bothered to see if the car actually started and ran. Really, sometimes I worry too much. What could possibly go wrong? We fixed everything, right?

In literature, they call that “heavy foreshadowing”.