Mazda NA Ops pres and CEO Jim O’Sullivan confirmed the Mazda2 for the U.S. and Canada during a dealer meeting. 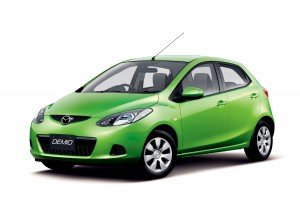 WILL BE SOLD IN U.S. AND CANADA

PALM SPRINGS, Calif. – Mazda North American Operations’ president and CEO, Jim O’Sullivan, confirmed today during a meeting of the company’s top dealers that the MAZDA2 subcompact, or B-Car classification, car will be sold in the U.S. beginning in late 2010.  It was previously announced that the car also will be sold in Canada, beginning at about the same time.

“You’ve asked us for it for a while now, and we’ve been studying the market to make sure we can make a business case for it across North America,” O’Sullivan told the assembled dealers.  “As consumers’ tastes and attitudes toward small vehicles have changed, we now believe strongly there is a place in our lineup for a car below our current least-expensive car, the MAZDA3.  MAZDA2 will be true to everything that makes our cars stand apart from the competition: it will be stylish, fun-to-drive and a heck of a value.  In short, it will be Zoom-Zoom.”

No further details were released at the meeting, other than notice that the final North American-specification MAZDA2 will be unveiled to media and the public at the 2009 Los Angeles Auto Show.  Further information on specifications, content, pricing and on-sale timing will be provided closer to launch.

Celebrating its 40th Anniversary in the United States in 2010, Mazda North American Operations is headquartered in Irvine, Calif. and oversees the sales, marketing, parts and customer service support of Mazda vehicles in the United States, Canada and Mexico through nearly 900 dealers.  Operations in Canada are managed by Mazda Canada, Inc., located in Ontario; and in Mexico by Mazda Motor de Mexico in Mexico City.