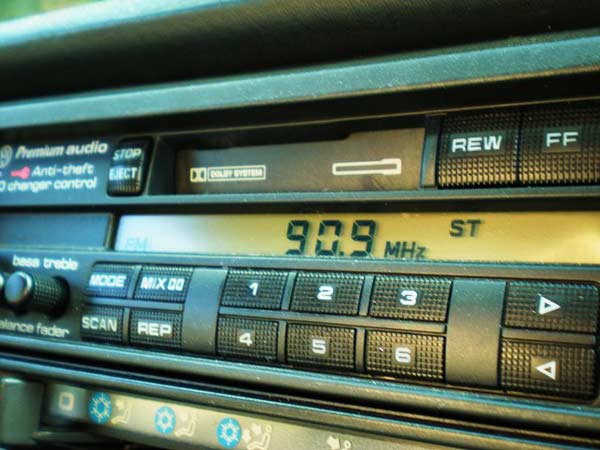 I’ve loved public radio since my days on the executive board of my college’s tiny station. We shared one of Vermont Public Radio’s frequencies, very convenient because we didn’t have enough warm bodies to broadcast original programming around the clock. I remember with great fondness and exasperation the semester in which I had morning office hours, fielding hundreds of calls from confused and angry listeners (mostly depressed, snowbound older women) who couldn’t figure out that we switched to student programming at 8 am, and that, yes, BBC World News was indeed cut off in favor of Lamb of God and Napalm Death.

When I moved to Chicago, nostalgic for home, I immediately began listening to the local NPR affiliate. Chicago Public Radio is more upbeat than its Vermont counterpart, and I was grateful for any entertainment during my 90-mile round-trip commute. This summer, I’ve fallen off its radar; my comfortable new car is gone and my partner-in-crime GTI, long ago rendered radioless, has a vestigial antenna to plug the hole in its roof.

Then Wes mentioned NPR and Chicago Public Radio were in the middle of yet another pledge drive. I was always touched by the shamelessness of the commentators; I’ve certainly been in similar situations, putting my dignity on the line for the sake of my career.

It was Wes’ sudden declaration that he wished we could donate to NPR at the much heralded dollar-a-day level, however, that brought some trepidation. We’ve been mentally grappling with his transition from salaried auto journalist to full-time student, and this proposition seemed like crazy talk. For some perspective, we’re in the habit of supporting our colleagues—to say nothing of my desire to see print media survive long enough to land an ink-on-paper byline—and even then we had just agonized over renewing a $12 car magazine subscription with the gravity of a couple deciding between food or medicine. Even though the dollar-a-day donation is a lump sum on the AmEx and therefore relatively painless, my rational side demands a justification of the expenditure—what could we cut from the budget instead?

I’m not much of a philanthropist. I justify my inherent selfishness by spending money with local artists and framing shops (and in my younger days, I was a proud patron of many VW parts suppliers). Shiny, fabulous objects quell my dependency on my car, at least for a few soothing moments. I can’t put a price on such relief, as fleeting as it may be… and as soon as it retreats, I’m back on the throttle.

It was only in the interest of my chosen industry that I pointed out, “If we quit driving like assholes, we could easily save a dollar a day.”

“Do you want to quit driving like an asshole, though? I mean, sometimes it’s the best part of my day.”

On my way home from work, much later that day, I powered the GTI through a tightly-coiled entrance ramp, windows down, listening to 6500 RPM through a Techtonics exhaust. Quite inconveniently, my conscience kicked in—how much cash could I repurpose by driving more rationally?

Throughout the gas crisis of summer 2008, we were bombarded with advice and lectures on efficiency. I bitched at the pump like everyone else, then I drove from Chicago to New Jersey and back, and Chicago to Maryland and back, in a 22 MPG Rabbit with 91 octane software and heavy 19″ wheels. Short of logging my mileage per tank and tracking averages, there’s really no way to answer my question; a casual assessment doesn’t work with a car that has a lackadaisical fuel gauge and displays the tank’s contents in liters. (Screw real-time mileage—what we really need is a gauge that calculates the cost of throttle input based on current gas prices.) Even then, I need room for user error—the truck I had to pass, the traffic jams, or the really crappy days when I know nothing else will cheer me up. On these days, I take pride knowing I’ve spent less on gas than a smoker spends on a pack.

I’ve tried and failed to convince myself that sacrificing one form of entertainment for another is the noble way… why? I’m occasionally apprehensive about driving like a selfish bitch, but clearly, not often enough. So flippant I was, and shall remain, about the effects of my habits. Maybe donating to public radio will offset my bad karma, like buying carbon credits (which isn’t a bad idea, if they are tax-deductible and come with some intellectually-stimulating way to waste time, like an iPhone tracker app).

A dollar a day for NPR? Sure; it’s my asshole tax. An additional few pennies for magazine subscriptions? Absolutely—a smaller sacrifice, but just as important. In the context of The Auto Industry as a Whole, the media seems like a minor issue. I’m still undecided on my feelings about the bailout; the upside is that my opinion on the subject matters not a bit. The media, though, has fueled my love for cars, has justified it. It’s inspired my career path, given me a somewhat productive way to while away my sleepless nights.

So, Chicago Public Radio, you’ve given so much and asked so little… your proverbial check is in the mail. Thank my husband. His car has a radio.