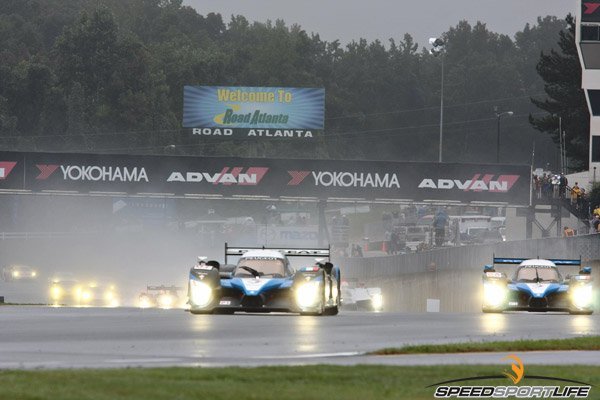 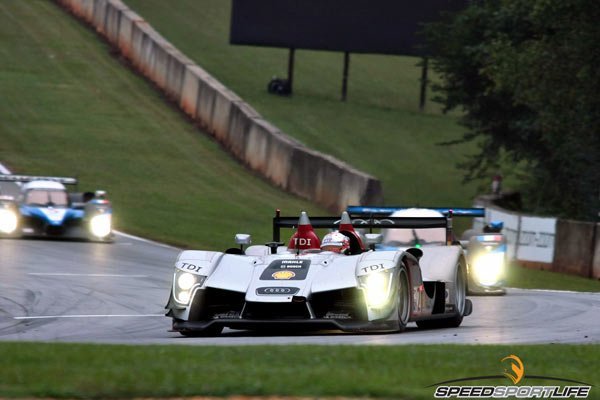 McNish and Capello dominated the race before the rains fell and led all but five of the first 168 laps. The two Peugeots got past McNish under yellow when the Scot looped the Audi under wet conditions barely past the two-hour mark. A few minutes later, the skies opened and officials parked the cars in pitlane.

“We started in the wet and it was difficult with a dry set-up,” Sarrazin said. “We were very far behind. But in the dry we could push very hard and make up time. I could catch the two Audis and it was not too hard to overtake them. But in the big rain it was just OK. We did our best in the time we had and the team did a great job.”

The highly anticipated battle between the Peugeots and the Audis lived up to expectations in qualifying and the early part of the race. Both Montagny and Sarrazin had to fight back from a lap down on more than one occasion after the Peugeots’ early race setup struggles.

It was sweet redemption for a team that lost out in last year’s race by a little more than four seconds to McNish and Capello in an Audi R10 TDI.

“We traveled thousands of miles to race here, so sure we’d love to have a full race but we also enjoyed it,” Montagny said. “Sure…at 300 kph, you hit the water and you just keep going…it’s not so much fun.”

“The mechanics here have won Le Mans, so they are very good and they know what they can do,” Sarrazin added. “We are improving all the time, in the race and in testing. I think we show that. And the drivers, we are always giving the maximum just like our crew does.” 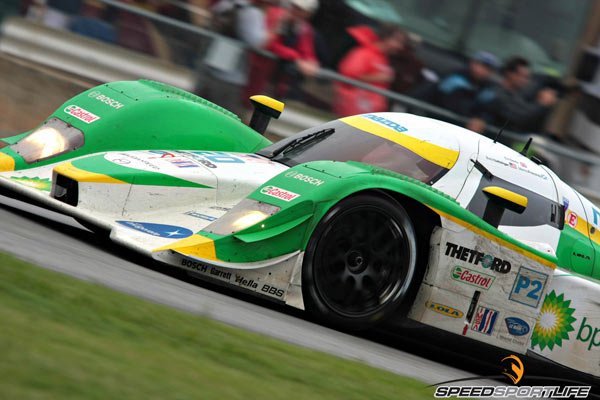 Dyson Racing took its first Petit Le Mans victory with a victory in LMP2 for Marino Franchitti, Butch Leitzinger and Ben Devlin. Their Mazda-powered Lola B09/86 coupe had problems with gear selection early, but the Acura ARX-01b of Lowe’s Fernandez Racing’s Adrian Fernandez and Luis Diaz experienced steering issues throughout.

Nevertheless, the duo completed enough laps to clinch the team championship for Lowe’s Fernandez and the manufacturer championships for Acura.

“We had a gearbox issue just once and the guys were able to fix it with only one repair,” said Franchitti, who qualified on the class pole. “I think I saw every kind of condition possible here at Road Atlanta today. It was especially great to bring a win here with the Mazda especially for a race presented by the Mazda 6. And now the Dyson win for Petit is pretty great.”

Franchitti and Leitzinger were class winners at Lime Rock in July, the first victory for the Dyson-Lola/Mazda partnership. The team also won for the first time at Road Atlanta in American Le Mans Series competition.

“These guys made it easy for me and this had to be one of the toughest conditions I’ve ever raced in,” Devlin said. “Marino did a great job keeping the car up there and so did Butch. By the time I got the car I just had to keep it on the black. It was great how well the car has developed, especially how I left it last year and the continued commitment and effort from Mazda.”

Things didn’t look promising early as the Lola-Mazda dropped as far back as 27th overall before attrition started to take a toll on the class. There were the problems with the Lowe’s Fernandez car, and the Team Cytosport Porsche RS Spyder of Klaus Graf, Sascha Maassen and Greg Pickett led 30 laps before a spin and loss of power sent it tumbling down the order.

“This event, it is truly amazing – year on year increased in significance and attendance,” Leitzinger said. “I was here for the first event in 1998. The buzz just gets bigger and bigger. There are certain places that you go to, Sebring, the Indy 500, Le Mans, and this really has attained that in just a short amount of time and how everyone has embraced that. We’ve had some really horrible disappointments here, and it was really important for Dyson Racing to get this win here.” 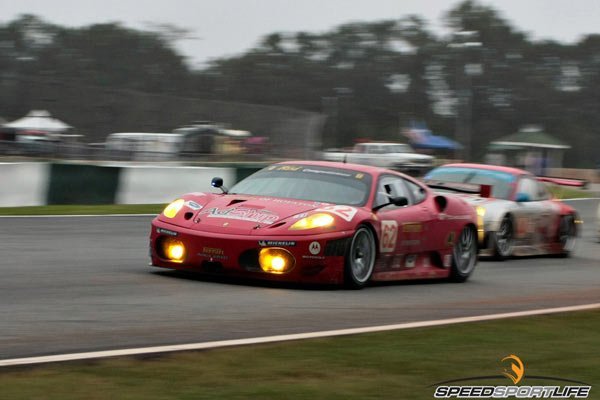 Risi Competizione’s Jaime Melo, Pierre Kaffer and Mika Salo won in GT2 in their Ferrari F430 GT, the fifth straight endurance victory for the team. A brilliant call by Salo to take wet tires before the rest of the GT2 field proved to be the difference, and it took him six laps to move the Ferrari past the five cars in front of him to take the lead for good.

“This is only my third race this year with the team,” Salo said. “It is such a good atmosphere; everyone works so hard. You can trust them and they don’t go off the track. It’s so much a pleasure to drive with the Risi team. We might not have been the fastest in the dry but in the wet we were very quick.”

The Ferrari began 10th on the GT2 grid after a tire puncture limited Melo to one flying lap in qualifying. The Ferrari never cracked the top three until the rain fell. The opening portion saw the top six cars in class on the lead lap, another testament to the level of competition in the class.

The victory enabled the Risi team to stay alive in the class championship. Melo and Kaffer are 19 points behind the Flying Lizard Motorsports’ duo of Patrick Long and Jörg Bergmeister with a maximum of 25 points remaining.

“It’s a kind of strange race, but we had a competitive car,” Melo said. “I was a bit conservative at the beginning, the track was wet. I didn’t take any risk. I was feeling comfortable, and in the dry condition we had a good car and could keep up with the guys right up to the last minute. Thanks to Pierre for keeping the car good for his two stints. Our whole crew and the strategy were phenomenal the whole time. Even the tires on wet and dry, we could manage the car really good.”

“Jamie was quick in the race. We made a change in the bar in my first stint but we changed it back,” Kaffer added. “I have to thank my team for working so hard and this victory. I always can learn something from Mika, even from today with not such a long stint, he made the important call today. In the end, we are the lucky winner.”

The Audi R15 TDI of McNish and Capello was the prototype winner in the MICHELIN GREEN X Challenge, a revolutionary award that goes to the cars that go the farthest the fastest and with the least environmental impact. The second Flying Lizard Porsche of Seth Neiman, Johannes van Overbeek and Darren Law was the GT winner. Porsche captured the manufacturer season championship in the environmentally based efficiency competition.