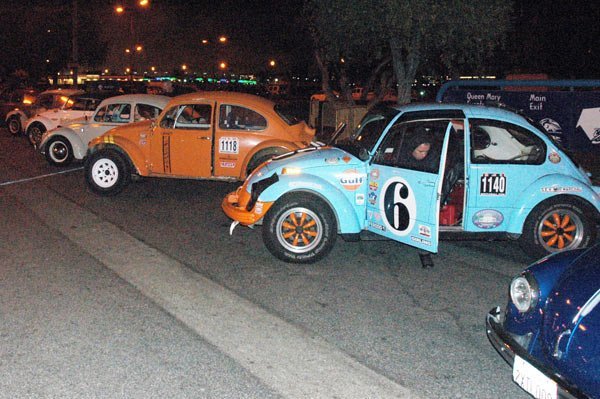 Remember the movie Cannonball Run? You know, back when Burt Reynolds had a full head of hair. Well, when I was a wee lad and I saw that movie in the theatre, the image of those two ladies with the huge racks piloting their Lamborghini Countach down the freeway and tagging the 55 MPH speed limit signs changed my life forever.

Fast forward a couple of decades, ole Burt’s hair line has receded but my yearning for an all out open road race adventure has not. Roll tape on the Beetleball. It’s just like the Cannonball, only instead of Lamborghinis it’s Volkswagen Bugs. Trust me, it’s hard to get a speeding ticket in an air cooled Volkswagen, well, at least in the one I was driving anyway.

This event can be as cheap as two tanks of gas and the 250 dollar entry fee (you get a lot for your $250, see Sanctioning Body below). I say cheap, however, that is if you already have a Volkswagen that runs, is registered for the street and has a prayer of finishing the rally. If you don’t have a VW, borrow one from somebody who is letting theirs rot on the side of the house. Air up the tires, throw some oil in that bad boy and go have some fun (just make sure your AAA membership is current for the tow truck you will be needing later). Some guys run this event solo but I would recommend a sucker to sit in the right seat -I mean a navigator (he/she can also share in the expenses). Since this rally is run on public roads there is no added cost of helmets, fireproof suits or other nagging expensive items which are supposed to keep you alive in a racecar. 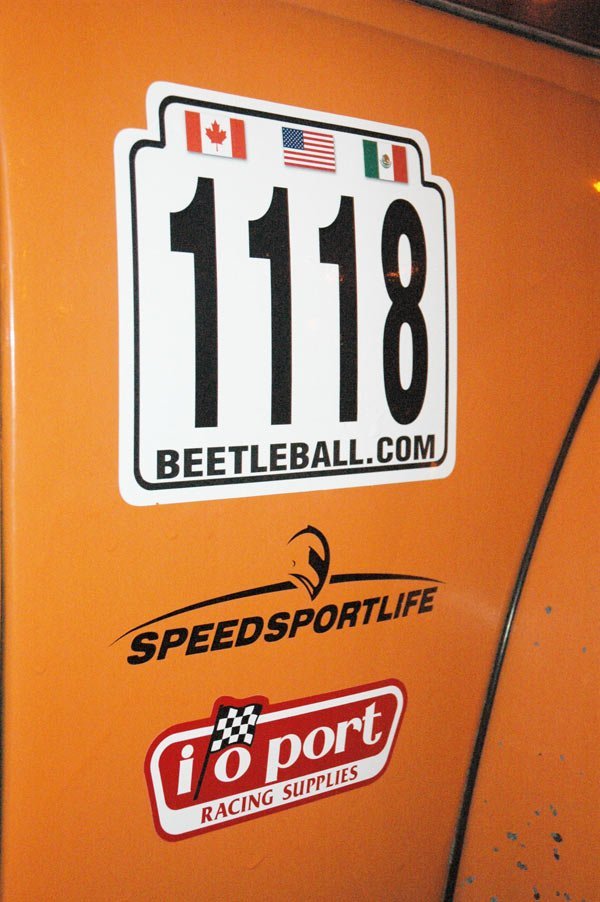 Beetleball is run by the Beetleball Endurance Rally Series folks, and when I say folks, I mean one guy, Jim Ferguson, better known as Jimbo. Jimbo is The Man, and he is what makes this event so cool. Out of all of the different motorsports series I have competed in, Beetleball was hands down the best at passing out the swag. Tons of decals, cool tech stickers, finishing stickers, checkpoint trophies, class trophies, t-shirts, number plates, you name it. The quality of the swag was excellent (trophies from Crown Awards) and it made the competitors feel like they were really a part of something big. Thumbs way up Jimbo!

I ran in the Long Beach to Las Vegas rally, however, the series runs numerous events, namely the Beetleball 24 which runs from Vancouver, Canada to Ensenada, Mexico (Get your passports in order). In 2012, Jimbo is planning on running from Manhattan, NY, to San Francisco, CA. For more information on upcoming events, classes and tech go to www.beetleball.com. 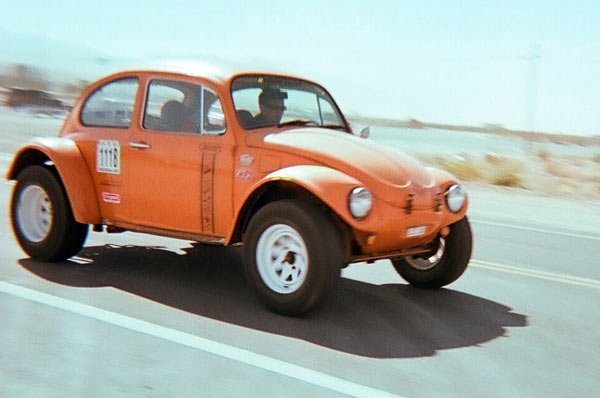 This is your chance to go insanely fast at legal freeway speeds. What I mean is that a Volkswagen Beetle going 70 miles an hour down the freeway actually feels faster (and more dangerous) than a new Mustang going 140. There is something to be said about the experience of driving a car with your right foot planted on the floor for six hours straight. This will get your senses awake.

You have to maintain a steady pace, stay on course, keep the motor from grenading, and have your eyes open for Johnny Law. It’s a lot to do and you’ll be amazed how quick the event goes by. At the end your ears will be ringing, you should have a headache and you’ll feel like you need to sleep for three days. It’s that awesome.

This part is a little on the sticky side. Devout VW owners will tell you that Volkswagens will run forever. That may be true, however, they only run forever at two thousand RPMs. When the little Beetle motors are run flat out for six hours, sometimes they only actually run flat out for three hours and then die, pissing oil and piston fragments all over America’s highway system.

The rate of the car’s destruction is proportional to the placement of your right foot during the rally. Good news, if it blows up, who really cares? These cars are easy to work on and spare parts are endless (they built over 21 million of these cars). 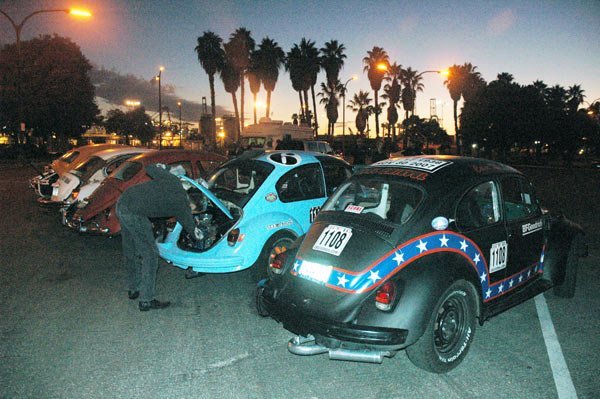 You pre-register (and pay) to get your course notes and number plates before the event. You will need to show up a day prior to the start of the rally to go through technical inspection. Big Red will take a look at your ride to make sure it’s legit (he’s a Baja SCORE guy). Beetleball rules require the car be street legal (lights, brakes, etc. in working order) with current insurance and that each competitor has a set of triangle reflectors, a fire extinguisher and a first aid kit in the VW. There will be a driver’s meeting explaining the route and any supplemental rules (don’t worry, there aren’t many rules in this event).

Next you to try to get some sleep prior to the start of the rally (ours started at 3:00 a.m.). We grabbed a nearby hotel room while some of the other competitors tried to sleep in their Bugs (well, sort of in their bugs, their bodies were laying across the front seats, with the door open and their legs hanging out on the parking lot asphalt). When the start of the rally approached all of the VWs were lined up door to door. The driver’s and navigators were positioned across the street ready for a LeMans style start (you run, jump in your car and drive off like a mad man, only to remember to put your seatbelt on ten miles later).

When Jimbo checks the official race time and says “go” you’re off! It’s a Volkswagen frenzy as cars vie for the front. Navigators yell out directions over the piercing noise of the redlined VW engines. Drivers try to push the right pedal through the floor pan. This goes on and on until either the car runs out of gas, blows up or both. Eventually competitors will arrive at a checkpoint (Big Red is there to meet ya) where you will pick up some more swag and then blast off toward the next destination, usually another checkpoint.

Where or when you get gas is totally up to you. Have your ATM card ready to go or throw some green at the cashier to make your stops as quick as possible. If you don’t get lost, arrested or your car doesn’t implode, you will eventually find the finish line, where Jimbo will be waving the checkered flag.

Now that you have completed the rally and survived it’s party time. We finished in Las Vegas and there was nothing quite as satisfying as drinking a beer at 9:40 in the morning after running a six and half hour rally through the desert. Once all the competitors finish the rally (or at least the ones who are going to) there will be an awards ceremony. Trophy time! 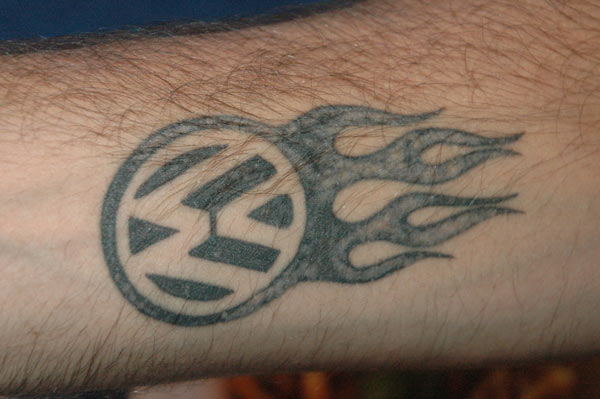 These are VW fanatics. The people at the Beetleball are almost religious about their Volkswagens. For instance, they like to tattoo the VW logo on their arms. They are also some of the coolest car guys I’ve ever met. A lot of the Beetleballers are Class 11 SCORE Baja racers. Everyone at the Beetleball was absolutely great. There were lots of laughs and smack talking during the pre-race driver’s meeting.

These guys (and gals) also help each other out along the rally. Anyone who stops to assist a competitor will have their “rescue” time deducted from their overall rally time. It is an awesome concept and I saw it in action on numerous occasions (as numerous VWs died). One Beetle came flying into the finish line with two extra passengers, picked up from another car that was stranded on the side of the road (they didn’t want to miss the finish party in Vegas).

There is some glory to be had at the Beetleball. Blasting down the Las Vegas Strip toward the finish line while Jimbo stands in the middle of the street waving a checkered flag will definitely get your adrenaline up. The overall winner gets a beautiful trophy, each class winner (of 33 classes) receives a trophy as well, and the last place finisher picks up the D.F.L. trophy (yup, that would be the guys driving the VW Bus). Results, records and photos are kept up to date on the website, which means you can send a link and impress Grandma who just got her Facebook account working. Does Beetleball have a trophy girl? Nope, just trophy Jimbo. 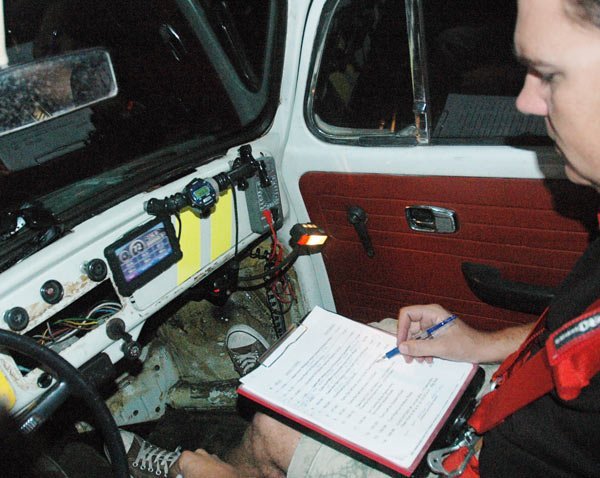 To win this rally you need to finish. That may sound like an obvious statement to make but it seems to be more of a problem here than in any other series I’ve raced in. You have to find that fine line between a good pace and lunching the engine. It may only be a 100 RPMs difference between the two. Which 100 RPMs is the real question.

But the success story behind winning Beetleball isn’t a set of dual Webers on an insane motor, it is navigation. During our race, the same Beetle (which had a great motor) drove past us four times. We never saw that we passed him, yet he continually passed us, over and over again. In the end he finished behind us. Why? Because even though the car was fast, the driver continually got lost.

Fuel mileage can also help you win the race. We picked up a finishing place near the end of the event when a competitor in front of us ran out of gas. Sure, stopping for gas at a gas station takes precious time, but standing on the side of the highway trying to flag down some help takes helluva a lot more time.

Bottom line, slow down when you should (and keep yourself out of jail) learn how to read a map (the N should point to the top of the page) and bring lots of oil. 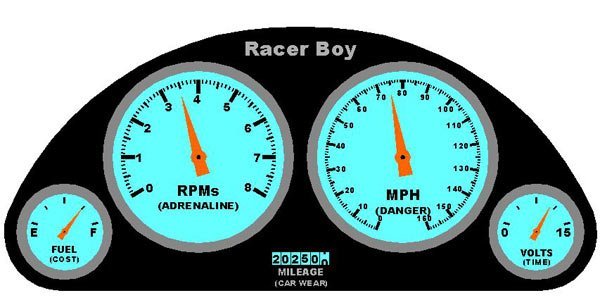 FUEL (Cost): The fuel gauge is around three quarters. No need for a bunch of expensive safety equipment, but you still shelled out $250 to enter and if you don’t have an air cooled VW, you’re looking for a super deal on Ebay.

RPMs (Adrenaline): The tachometer is at 3,500 RPMs because the LeMans start is the ultimate adrenaline shot and the first three miles of this event are absolutely insane.

MPH (Danger): The speedometer is around 75 mph because that’s about as fast as you can go in a Beetle. However this is a dangerous 75 mph. Remember these cars don’t have those new fandangled air bags. Instead of the soft cushion of air, they have steel dashboards. You don’t want to crash a Beetle, chances are you won’t live to tell anyone about it.

VOLTS (Time): The volts gauge is less than three quarters. This event will eat up an entire weekend, plus some travel. How much time you spend prepping the Beetle is up to you (I recommend lots).

Good news for air cooled Volkswagen lovers, you finally have a place to race your car where it is competitive! It’s been a long time since a Beetle won a race on asphalt. Beetleball changed all of that. This is a truly insane/fun/crazy/awesome/questionably legal event. I’d recommend it to any car guy, VW fanatic or not.