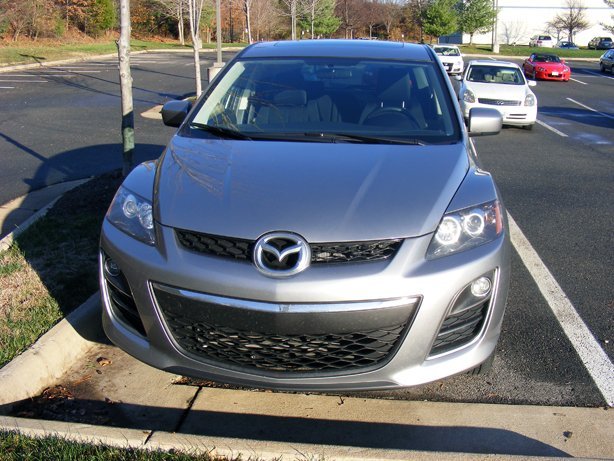 I glide to a stop at a red light. It’s Thanksgiving and I have my ladyfriend and parents in tow. This is the first time my folks have been inside our CX-7 tester and they’re still getting acquainted.

I can tell he’s mulling that over. This is a man–a computer programmer–who dailies a turbodiesel Dodge Sprinter. Yes — the big white plumber van. You could say he’s a fan of practicality.

“So what’s the point, then?” he finally asks.

I shrug and gesture around the cabin at the four comfortably-seated occupants.

That’s about what the CX-7 boils down to, especially in front-wheel drive, naturally-aspirated, 4-cylinder trim. I know; that doesn’t really sound like a typical Speed:Sport:Life test vehicle, but I requested this car specifically and I’m thankful that Mazda was able to oblige. More on that in a bit.

And if those specs sound a bit off, that’s understandable. 2010 is the first model year in which the CX-7 is available without the Direct-Injection Spark Ignition (DISI) 2.3L turbocharged engine. It breaks down thusly: You can get the “i” FWD, 2.5L in SV and Sport Trims, and the “s” 2.3L DISI in Touring and Grand Touring. The turbo models are also available with Mazda’s “Active Torque Split” all-wheel drive system on both trim levels.

The 2010 model also gets a facelift, which means a shift toward the nigh-universal smile. There are few cars left in Mazda’s lineup that don’t sport the Joker face, but the CX-7 wears it better than most. In fact, several people we asked found the new front end to be a significant improvement over the outgoing model.

Our i Sport FWD tester came equipped with the Convenience Package (8-way adjustable power driver’s seat, rearview back-up camera, multi-function information display and heated front seats), Sirius Satellite Radio, fog lamps and a retractable cargo cover. This grab-bag of “hey, neato!” type accessories bumped the MSRP up from $23,090 (incl. delivery) to a not-at-all-dear $26,460. A loaded-to-the-gills AWD Grand Touring model will set you back about $35k (and punish your wallet in other ways).

And that takes us back to the reason why I picked this trim in the first place. A quick glance at fuelly.com’s CX-7 list will tell you everything you know. Fuel economy in the mid-high teens is par for the course if your turbocharged model sees anything but highway trips, especially if you ticked the option box for the all-wheel-drive. On top of that, to get all 244 of those direct-injected, spark-ignited ponies, you’re going to have to spring for at least 91 Octane at the pump. Our i Sport FWD on the other hand, will gargle low-altitude 87 all day long, and over the week that we had it, returned just a hair under 27mpg overall (65% highway, give or take). Not bad.

That frugality comes at a cost, however. You may not dip into your wallet as frequently or as deeply as you would with the turbo model, but if you’re anything like me, you’ll be pilfering from your vault of colorful vocabulary with proportionately greater regularity. Why? Because it’s slow. Dog slow. Get-the-bleeping-lead-out-slow.

But that’s okay (said after a handful of soothing breaths), because it does just about everything else very well. The seats are firm (hands-down our most common complaint about current-generation Mazdas), but supportive and comfortable, even on longer trips. Like the new Mazda3, the CX-7 sports an evolution of Mazda’s two-tiered dash, which at first glance appears a bit awkward, but delivers improved ergonomics and material quality. Unfortunately, this comes at the expense of the navigation system, which, if so equipped, now occupies the downsized screen just left of center in the heads-up display (where the multi-function display sits in non-navi models). Gone is the large, center-mounted unit from the 2007-2009 models.

But the small, less-accessible navigation system is far from our biggest quibble with the CX-7’s gadgetry. That honor is reserved for the cruise control system. The double-jointed dimwit who came up with the absolutely hateful mounting locations for the cruise system became the object of my hatred just minutes after I first got behind the wheel. On previous model years, the cruise control buttons sat on the eastern spoke of the steering wheel–a natural reach for the right thumb. They were displaced however by the new navigation controls and relocated to both flanks of the southern spoke. They’re also set inward about a half an inch from the face of the wheel. This not only makes for an unnatural and awkward reach for both thumbs, but it also necessitates a less-than-ideal 4-and-7  hand position if, like me, the driver wants to keep his or her hands on the wheel while manipulating the controls. Luckily though, our complaints pretty much ended there. 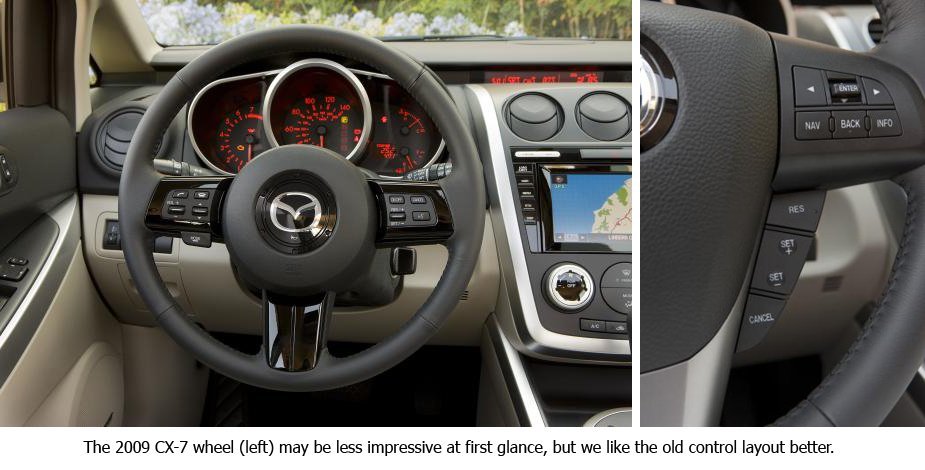 Once I had the opportunity to look up from the steering wheel controls and start to feel it out, I found the driving experience to be surprisingly rewarding. Our tester may have been down on power, but it was a star when it came to handling and braking. It was surefooted enough to regularly outpace the typical type-A northern Virginia drivers with whom I regularly share two-lane on-ramps and merge areas. In reality, the CX-7’s greatest handling enemy isn’t its weight (at 3,496lbs, it’s no heavier than many v6-powered midsizers) but its center of gravity. An aggressive turn-in will bring on just enough body roll to remind you that you’re not exactly driving a 3 Series, but not nearly enough to shake your confidence. At its heart, the CX-7 is very much a car; it’s just a car you can actually see out of–well, for the most part anyway.

The thing is, most ~3,500lb midsize sedans are that heavy because they have a ~3.5L V6 shoved between their front wheels (Turning radius? What turning radius?) and 250+hp on tap.  161hp motivating 3,500lbs is not a recipe for quickness no matter how you qualify it. It’s adequate, and even almost quick when you really slam the gas pedal into the floorboards, but it’s not within miles of fast. Thankfully, there’s very little unexpected gear hunting from the 5-speed auto, and the cruise control (%!&#*) holds speed reliably even on fairly healthy highway grades. It shifts quickly and crisply, and the tip-shift feature is fun, if somewhat of a novelty in a vehicle like this.  I found myself using it frequently, and even verified that the transmission control logic will let the engine hit the limiter in a given gear and hold it just before fuel cut-off until you tap in an up-shift. That’s something I expect from a sport sedan, not from a crossover. It’s a little out-of-place, but not at all unwelcome. Kudos to Mazda for throwing that particular bone.

So what’s the advantage? Of all the attributes I’ve described so far, only one can’t be duplicated by a run-of-the-mill family sedan, and that’s ride height. Some may not even consider that a plus. The cargo area isn’t even all that impressive. With the optional cargo cover installed, you can’t realistically fit much more in the back than you could in a typical midsize trunk. Now granted, if you remove the cover and drop the 60/40 split rear seat flat on its face, it’s a whole different ballgame, but dare I say, it’s still not much roomier than a typical compact hatchback when it comes to hauling large objects. Even though the seat-up cargo volume (~30 cubic feet) is nearly double that of a Mazda3’s (17 cubic feet), once you drop them flat and start taking measurements for that dishwasher, the story changes a bit. The slope of the hatch and the high floor (no doubt a side effect of the car being designed for all-wheel-drive) impedes your ability to load large objects without moving them well into the rear passenger area. As a result, the total seat-down advantage only goes to the CX-7 by about 15 cubic feet (42.8 vs. 58.6). In terms of real-world hauling, the CX-7 only has a distinct advantage when it comes to longer, but not necessarily larger, objects. Listen to me; I sound like my father.

In a way he’s right. The are far more practical and far more comfortable cars out there for similar money, though I can’t name one that does both in this size class without taking a serious penalty in styling . Even Mazda’s own Tribute has the edge in practicality and the advantage of more conventional drivetrains, the hybrid included, but it doesn’t really have anything else going for it, and certainly doesn’t offer much of a compelling styling advantage over its near-identical twin, the Ford Escape. And the Escape has Sync.

And that’s why it matters that the CX-7 has soft-touch plastics and big comfy armrests and a nice, tall seating position and abundant rear leg room and fantastic driving dynamics. Because if it didn’t, then it really would be pointless. Instead, it’s a car you want to drive–or buy–even if you have no reason to buy it. It just hits you like that. We came away from it with the desire to have one of our own, even though we have no earthly reason to buy one. Sure, I’d want the turbo for the stoplights and she’d want the all-wheel-drive for her farm expeditions, and we’d both want something other than silver, but genuinely good cars have a magnetism that transcends their purpose.

And the CX-7 is genuinely good car.