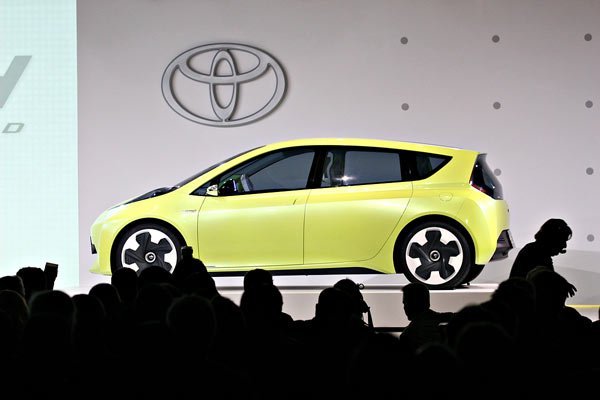 “Imagine a world,” the soft-spoken, rather anonymous man from Toyota said, “where you wake up to find that every car has disappeared.” His meandering, rather confused speech, which touched on everything from fuel cells to “Super Mario 3”, was simply a roundabout way to introduce a junior Prius. Nevertheless, the concept of a world without cars was clearly on everyone’s mind this week.

The twin spectres of an energized Brussels and a pressure-sensitive Obama administration made NAIAS 2010 the least product-oriented Detroit show in recent memory. It’s worth noting that, although the auto industry was suffering near-unprecedented turmoil last year, there was enough product in the pipeline to keep things interesting. What we are seeing now is the aftershock of the financial earthquake. The three performance-oriented introductions — CTS-V Coupe, Mustang 5.0, and Regal GS — were permitted to sink beneath the waves of endless battery-powered concepts and we-swear-this-hybrid-badge-is-legit pretenders like the Volkswagen NCC. The companies which are receiving government aid clearly feel compelled to pander to the panjandrums’ demand for alternative powerplants, while the ones which aren’t are afraid to display even a smidgen of exuberance. Ford went so far as to schedule an enthusiast-media intro for the fabulous new five-liter ‘Stang weeks before the actual show, presumably to avoid having to reveal a four-hundred-and-twelve-horse car before the oh-so-judgmental eyes of the mainstream press.

Take the GMC Granite — please. Is anybody asking for a pint-sized GMC? Are consumers interested in a vehicle which stretches GMC’s already ill-defined brand-image that far? If there are any such consumers, they are likely sitting behind a desk in Washington, D.C. Perhaps the men at the Renaissance Center are afraid that GMC will not be permitted to operate freely unless the requisite three thousand pounds of compact flesh are publicly sacrificed. Across the aisle, the impressive Cadillac XTS Platinum was self-consciously described as a plug-in. Does anyone seriously believe that the next full-sized Cadillac will be delivered as a plug-in? This is Soviet-era thinking, dressing up the unacceptably luxurious in state-approved low-power togs and hoping for the best. 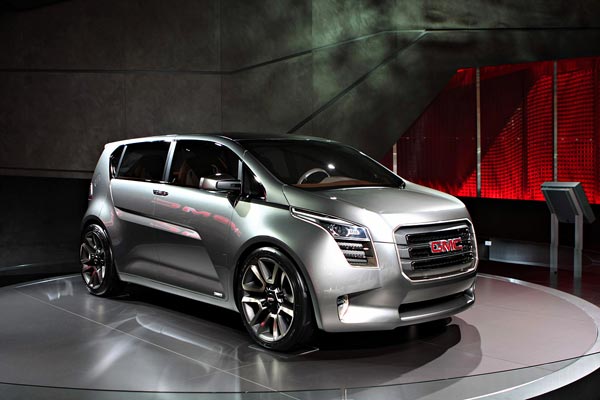 Environmentally-conscious shoppers hoping for genuine hybrid news had a significantly smaller selection of product from which to choose. BMW turned the spotlight on its ponderous ActiveHybrid 7-Series and X6, but only Honda’s rather controversial CR-Z offered anything to excite the tree-hugger crowd. Surely Honda would have called this an “Insight” of some type had the current car of that name not failed so spectacularly. Instead, the chilly reception accorded Honda’s tepid teardrop has spiked any hopes that Insight will ever make the transition from model to mini-brand. 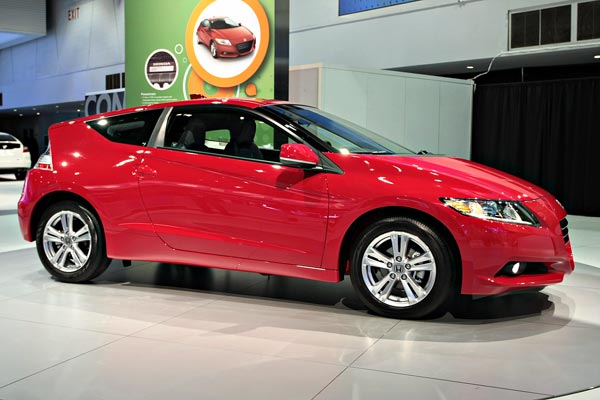 Prius, on the other hand, is a nameplate with enough equity to carry a few extra models, and that is why Toyota’s FT-CH will debut with Prius branding. The actual mini-Prius is nothing to excite anyone outside a Whole Foods checkout line, but it still ranked as arguably the most important reveal of the event. The Toyota brand has been tarnished somewhat in the last few years, but “Prius” has gold-plated appeal across a vast demographic spectrum. Face it: Prius-the-brand has better legs than Scion-the-brand, which is why the bright-green FT-CH revolved in the center of Toyota’s display while Scion hid in a deliberately darkened section of Cobo Hall. Faced with fiscal difficulties, Toyota has chosen to target people who hate cars as their primary profit source. Best of luck to ’em. 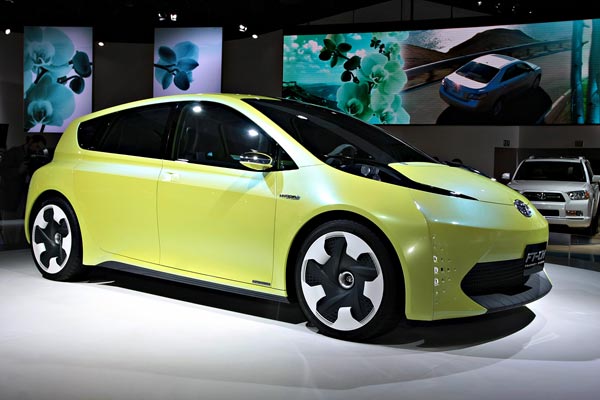 Back on the domestic side of the aisle, Ford and Chevrolet both debuted the missing pieces in their small-car strategies. The contrast is sobering. Ford has bet heavily on premium compacts, with the next-generation Fiesta and Focus offering a decidedly European-flavored approach. They won’t be cheap, but they are nice cars in every sense of the word, and they are “world cars” in the traditional sense. Chevrolet, on the other hand, has ordered Korean takeout to fill in the spaces beneath the Malibu. The Cruze and new Aveo (hilariously pronounced “AV-eeeeo” by the oh-so-British Chevy flack, who presumably pronounces their country of origin as “KOR-eea”) are nothing but putatively-US-built Daewoos. Here’s a hint, Chevrolet shoppers: there are better Korean cars available at the local Hyundai showroom, and they are likely to be cheaper. 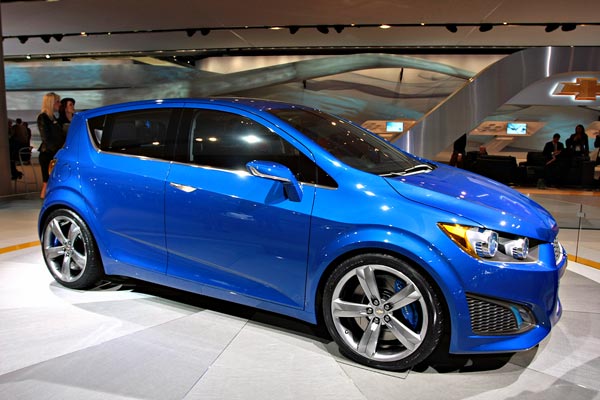 The VW/Audi axis (small “a”, mind you) debuted a couple of faux-environmentals. The Volkswagen NCC is an Audi A5 viewed through the decontenting glass, with a side order of Bangle-esque surfacing thrown in just to eliminate any potential brand DNA that might be accidentally accumulating somewhere at Wolfsburg. The crookedly-applied “HYBRID” badge fooled no one but the most credulous, while the high-dollar gloss-black trim provided the only true visual interest found anywhere in the vicinity. Don’t worry. It won’t make production, and neither will the interior. Over at Audi, a second-generation “e-tron” sportster rolled out on Schick-alike wheels to mild applause. If we’re seeing the long-rumored R4 with now-mandatory environmental disguise, this will be remembered as a significant intro. If, on the other hand, Audi will bury this hippy hippie-mobile until the imaginary next-gen batteries arrive… oh well. It looked nice and it distracted attention from the rather underwhelming new A8. The biggest Audi seems to be undergoing an unfortunate reverse aesthetic evolution; each new variant is uglier and more detail-intense than the one before. At least there’s a yacht-inspired shifter, appropriate for what’s become such a big boat. 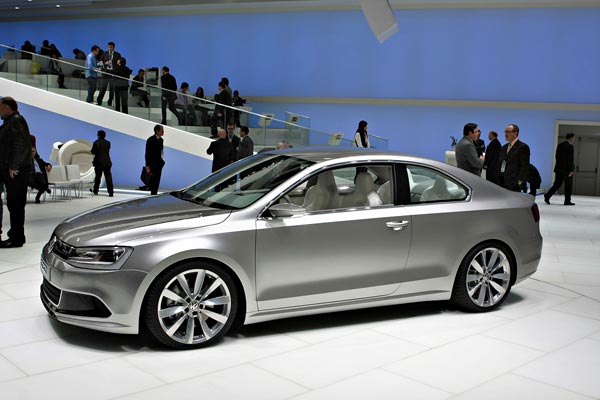 We would be remiss if we failed to mention the scrappy little Chrysler Corporation. They were dismissed as a dead duck by the press and abandoned by the conventional wisdom, but all along Chrysler was actually paddling vigorously beneath the water. It appears that the long-derided “Fiat strategy” is actually going to happen, and a Chrysler-grille Lancia was more impressive in the metal than in pre-event contemplation. The revamped Caliber interior is actually pretty good, and our conversations with Ralph Gilles (to be published on Thursday) gave us plenty of hope for the reanimated, car-centric Dodge brand. Don’t count the Pentastar out yet. 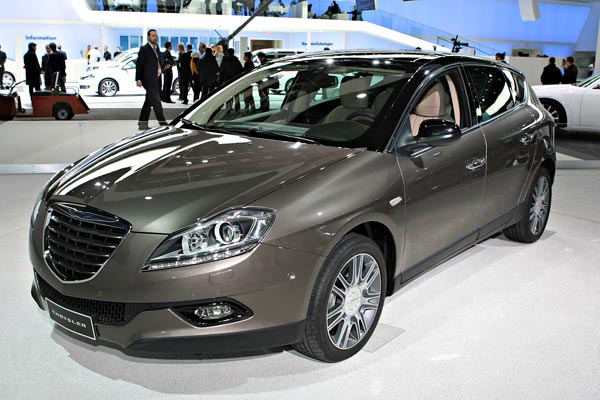 “Imagine waking up in a world without cars.” It’s not the kind of dream we have here at Speed:Sport:Life. Our dreams are written on the rear spoiler of the Laguna-Seca-record Viper ACR, smoothed along the Eldorado-esque flanks of the CTS-V Coupe, and carefully inlaid among the Bentley Mulsanne’s maple door panels. We’re carrying the enthusiast flag, and we know that many of you are right there with us. To our fellow-travelers in this cause, we can only recommend holding on to hope and waiting for next year. 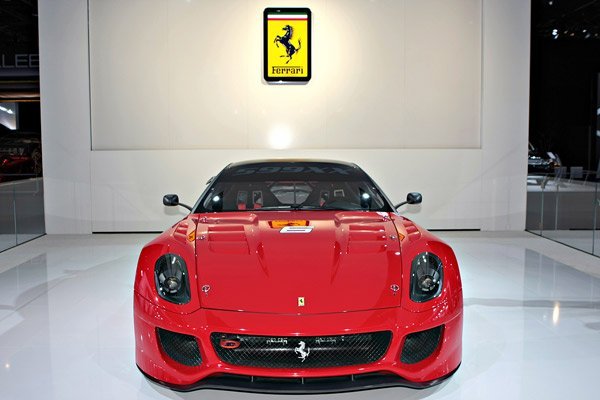