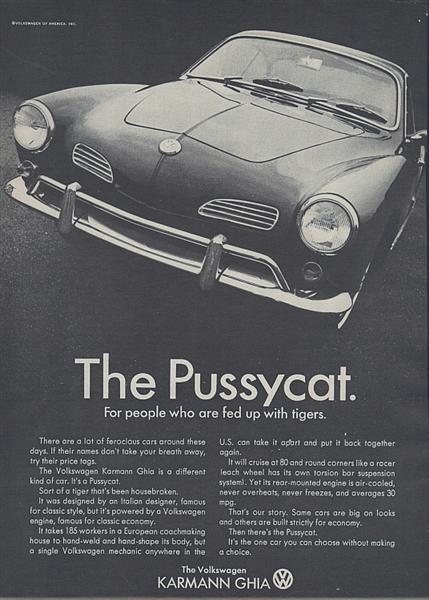 I didn’t know my friend Frankie was into cars, because the topic no longer peppers my first few conversations with a new acquaintance. My vetting process for human interaction used to be car-focused, but that’s changed. Also, we haven’t actually met, but that doesn’t faze me at all.

I was a bit surprised, then, to find Frankie’s blog entry about the sweet freakin’ Karmann Ghia owned by a derby queen in the movie “Whip It!” I knew we’d both seen the movie on opening weekend, thanks to Facebook, and I knew she liked Ghias since we’d talked about them briefly, but I was charmed to discover that she liked them enough to write about them at length, an entire blog entry based on a few minutes of cameo appearance.

Though I loved watching a seemingly well-cared-for Ghia onscreen, I thought it was a particularly weak point in a plot full of holes. We, the nouveau twentysomething feminists for whom this movie was made, are supposed to accept that the female collective of characters is simply so fierce, logic and reason don’t apply, even though a lot of character flaws are worn with pride. Specifically, this single mom with an adolescent boy owns a Karmann Ghia, in enviable condition, drives it daily and keeps it running? She might be a skilled derby chick, but I doubt she got greasy wrenching on her German pain in the ass. I’m almost ashamed to admit it, but if the screenwriters had thrown in a quick and painless line implying she routinely entertained her mechanic, I would’ve let it slide. (I spent my early 20s cohabiting with a guy who wrenched for a living, and I think a Ghia would have ended the relationship a lot sooner.)

Back to Frankie, who raised a good question — why don’t women own cars considered classic or collectible? Of the many women I’ve known to hold more than a passing interest in cars, I can think of only a couple who’ve owned genuine classics, and only one who drove it regularly: a former colleague in Vermont enjoyed her MG convertible on days too nice for her Forester. Frankie, for the record, doesn’t own a classic car, though it might be a project for later in life. She’s a scooter chick, the kind I sometimes wish I was, riding around with a cute helmet, flowers and fresh fruit in a basket from a trip to the market. It’s got a similar appeal, I have to admit, for a lower cost of ownership.

If I were to posit this quandary to a women’s news site or blog, “cost” would probably be one of the top responses, but, oh, that word encompasses all manner of excuses, such as the obligations of work, the expectations of birthing and raising a family, difficulty in learning to drive a manual, the inconvenience of cantankerous cars and the stresses thus inflicted on work and family, and the masochism of classic car culture. And finally, the trump card: cars aren’t interesting. That would satisfy me; it’s a reason, not an excuse.

Of course, none of the publications or sites I patronize see fit to publish auto content for their target audiences, so maybe I’m way off the mark spending neurons here.

I needed a bit more guidance. I asked my friend Eve, older, wiser, and a career car chick, for her thoughts on the matter. She countered that she knows plenty of women with trophy cars; in fact, she and her mom co-own a ’65 Mustang. I didn’t know that, and if I had, I would have asked her about the car directly instead of showing off my naiveté. Eve did cite three roadblocks: Maintenance, skills and space. That’s pretty much what Frankie and I had concluded, but Eve’s got a professional copywriter’s efficiency.

What Eve seems to be getting at (and of course, I’m probably projecting) is that it’s a damn good idea to get my shit together before I attempt this.

Try as I might, I can’t imagine what it would be like to own a classic car; much like owning my GTI, I’d expect, but I’d get a lot more attention and be far likelier to attack anyone who rear-ended me. So is classic car ownership a goal we must decide early on, or is it something we can luck into later? I hope, when my time comes, that I still care, and that I’m still sharing a bed with someone who’s good with a wrench.

Perhaps Miss Maggie Mayhem can’t actually afford her Ghia; maybe she co-owns it with her mom. Its mere presence won the hearts of (at least) two women and made the movie that much more endearing. It got us talking, even if we were talking theoretically about a fictional car owned by a fictional character. Perhaps the point is, the short-term prospect of owning such a car is no less realistic than any given bit of chick lit film.

Frankie suggested that perhaps the Ghia itself was a bit unrealistic. I didn’t want to ask if she meant for the movie, or for our future as badass car chicks. As for Maggie Mayhem, I wish her a long and happy life with her Ghia. At least a derby girl is used to loving things that won’t love her back.

(And as it turns out, I was correct to call BS on the “Whip It” Ghia. As I was finishing up this piece, I Googled “Whip it Karmann Ghia,” hoping to find a publicity still to use for illustration. Instead, I found an eBay Motors auction for the movie’s prop car; absent a film crew to play dress-up, it appears to have lived a reasonably tough life, reflected by the auction results. Small victories, I suppose. Here’s to the magic of the movies and the dreams they inspire. “Be your own hero,” indeed.)