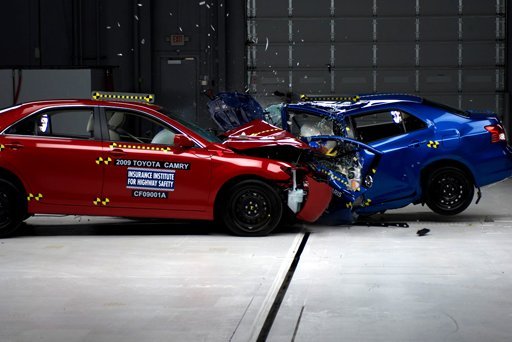 I don’t care about Toyota. I haven’t for years. I’ve observed their place in the market and even expressed some degree of interest in a very small handful of their offerings over the last decade, but I’ve never really thought much of them one way or another. That may become a somewhat difficult assertion to defend after the next thousand words or so, but take my word for it.

See, many car enthusiasts care a great deal about Toyota. They’re the ones who take every opportunity to tell you how awful their cars are, how dreadfully overrated they are, and how lifeless and soulless and dishwasher-like they are. They tell you how cheap and how poorly-engineered they are. You want a Prius? This guy tells you to get a used Jetta TDI. Your mom wants a nice, reliable Camry? Tell her to get a Volvo! You like the old MR2s? Wise up and get a 944. You want a MkIV Supra turbo? Supercharge an old F-Body for 1/3 of the price.

It’s the same thing, you know, just without all that Japanese suck.

But I’ve managed to maintain a well-moderated apathy toward our appliance-pushing overlords. After all, a certain degree of objectivity never hurt anybody. I try to give the best advice I can and take into account that not everybody has the same needs I do. As the owner of two beat-to-hell NA Miatas, I think this is a realistic mindset. In fact, if my best friend came to me today asking whether he should buy a new Toyota in the face of the recall, I’d tell him to do exactly what he would have done had this whole mess never come to light.

Because I have a better chance of being crushed to death by a tree here in my computer chair before I finish writing this article than he does of being killed by unintended acceleration.

Seriously. Lightning kills nearly 60 people a year. “Unintended acceleration” has allegedly killed twenty people period. I’ll give you 500:1 odds your death behind the wheel of a Toyota product has nothing to do with the spirit of Emperor Hirohito reaching up and taking his vengeance upon you in your (American-built) Japanese machine of death.

But the statistics aren’t really the point, are they? No. Toyota violated our trust. After decades spent cultivating an image of safety and reliability, suddenly they’ve been caught with their pants down. How long has this been going on? How many vehicles are really affected? They’re now Viggo Mortensen in A History of Violence. People have died and the blood trails lead to Toyota-shi. This is not the company we knew yesterday.

But instead of coming to us with reassurances and promises and pleas of forgiveness, Toyota did what modern companies do. They huddled up with their lawyers and their marketers and their public relations department and, outwardly anyway, did a whole lot of nothing. And then the Feds came a-calling. And like any good corporation with shareholders to worry about, they “voluntarily” recalled a slew of models (right before the government was set to mandate it), pointing to a faulty gas pedal as the reason for all these reports. In essence, anyone who complained about their cars would be able to site that they were Not at fault should an accident occur, and Toyota would have to take the brunt of any lawsuit that came their way. 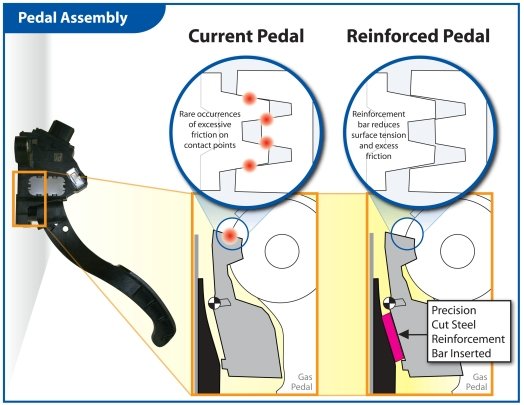 To the average Toyota buyer, a faulty pedal assembly makes perfect sense. After all, that’s what makes the car go, right? And if it’s going too much, well, it must be that there “go pedal” that we hear journalists talk about so much.

I know I’m not the only one scratching my head over this. Not being intimately familiar with the accelerator pedal mechanism and the throttle position sensors and such Toyota specs, I’m in no position to say that they’re wrong. At the same time though, Toyota’s public relations strategy in all this has been so half-assed that the smart player across the table is going to read a bluff.

But a bluff of that magnitude could never be worth the risk, could it? The odds are in Toyota’s favor. Twenty semi-confirmed deaths in five or so years of production is a figure that walks a fine line of statistical significance. It’s entirely plausible that Toyota could issue a feel-good fix to salvage their remaining credibility and have the odds work out in their favor for months–years even.

Before you mistake me for a conspiracy theorist at worst, or the world’s most cynical blogger at best, let me say this: I am not accusing Toyota of lying to the public, to the government, or to anybody else. I’m only trying to illustrate the depth of my skepticism due in no small part to Toyota’s inability to project any confidence in their fix. At no point since the floor mat debacle last fall has Toyota put forth a strong case that they know exactly what is wrong with their cars. Nothing. Nada. Zip. And then to suddenly come out with this solution, just as dealers were on the verge of panic? And oh, by the way, it’s only the faulty part built by the American supplier (to Toyota’s specifications) and not the DENSO part (also built to Toyota’s specifications, just not in the United States of America). So now the dealers have a solution for concerned owners and they have yet another convenient line to feed potential buyers about the quality of American-built cars.

Feel-good-fix or not, Toyota came too late with their admission and yet far too quickly with their solution. Only time will tell whether continued trust is misplaced or deserved. Toyota hasn’t lost me, but they never had me to begin with either. At this point, it’s up to them to convince me that they’re still worthy of my apathy. I’d hate to have to care.