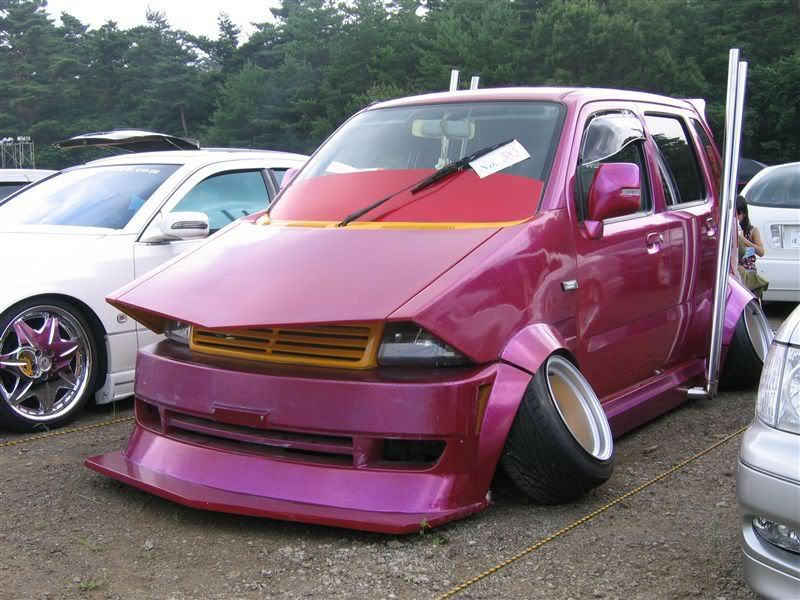 Anyone who spends enough time on The Car Lounge has doubtlessly seen numerous threads and posts with all manner of Volkswagens, Subarus, Hondas and (ugh) Miatas with improbably low ride heights, low offset BBS RS wheels in all colours of the Popsicle rainbow, roof racks and even rusted body parts.

The “stance” movement is the biggest thing going for people who seek validation from anonymous automotive forum members, though I have yet to really see a car like this in person. Maybe it will fly in California, but in Toronto, with roads like the surface of the Moon and 6 months of snow, this style is impractical if not unfeasible.

Hellaflush, the vanguard of this subculture, has popularized the war cry of “offset is everything”. The look is miles ahead of the Wings West and JC Whitney aesthetic that was popular for most of the last decade, and has its own appeal. The visual symmetry of a flush fitting wheel is pleasing, and the low ride height and lack of any adornments to the bodywork is aggressive, muscular and simple, a sort of pumped up automotive Bauhaus.

While the Bauhaus was an intellectual, as well as an aesthetic movement, seeking to embody Communist principles by designing minimalist housing for the working class, the aspirations of the stance movement is much more vacuous. Its sole aim is to “look dope”.

People are quick to point fingers at the Volkswagen crowd for this trend, but I can remember far back to the early 2000’s, before drifting was on the radar of most of America, a time when I truly believed that the Nissan 240SX was the answer to all automotive questions, if not one of the best cars ever made. The trend among drifters Japan (aka The Gospel according to Christ himself) was to have a low-riding car with low offset, wide wheels, pulled fenders (flares and body kits were not in style yet) and excessive negative camber, all of which was done in the name of easily breaking traction and then holding the slide.

Setting up a car for drifting is usually ass-backwards to what actually makes a car handle. Still, it has managed to permeate the collective consciousness of young car enthusiasts, who are unaware that buying coilovers with absurdly stiff springs doesn’t actually make a car handle well, but rather masks the deficiencies of a poorly designed car. Seeing 240SXs, AE86 Corollas and other RWD Japanese cars outfitted this way became the norm, and they added a certain panache to the otherwise boring, derivative designs penned by salarymen stylists. When drifting blew up, the look became widespread among all cars, even front wheel drive vehicles that had no business wearing a wheel that had an offset close to zero.

Even more offensive are the rusted hoods and corroded body panels present on some cars, serving as the pre-ripped and distressed jeans of the automotive world. As someone who lives in a snowy climate and is Woody Allen-neurotic about keeping the salt off his car, this trend offends me to no end. It’s easy for it to be co-opted by hard parking West Coast lamers when you don’t have to deal with the horrors of body work or road salt. I would gladly trade someone a rusty, snow belt car for a clean shell from an arid climate, but rust bubbles and oxidization don’t have the ironic, intentionally impoverished cachet that a fender doused in turpentine does.

By far the worst spill-over of this effluent is on the Miata forums – but mostly confined to a certain board I won’t name. While it is a refuge from the stifling dogma of chrome rings and racing stripes on Miata.net, the technical knowledge in the suspension section extends to “Lower it!”, “Slam it” or “weak offset bro”. Seeing people simultaneously praise the handling of a Miata and then post an example with a “nice stance” is something that makes me laugh. The Miata’s biggest flaw is the lack of suspension travel, and lowering the car exacerbates the problem.

I have no problem when this trend if it’s confined to cars that are irredeemable garbage (like the MKIV Golf/Jetta, Toyota Corolla etc), but the Miata’s sole quality is its wonderful handling. Below a certain ride height and beyond a certain offset, the geometry of the suspension and steering goes out the window, and the car rides like a bag of sloppy dicks. Even my friend Haig, whose car is plastered all over the internet as an example of a “dope Roadster” (and it is gorgeous) admits that his car handles and rides much better when raised to a fairly normal ride height of 13″.

The Stance movement is symbolic for our collective superficiality, desiring not what works well or brings us enjoyment, but what looks good standing still in a magazine. Slamming the car and throwing on a new set of wheels is something that can easily be bragged about on forums, you can take pictures of it and broadcast it to the world and enjoy the affirmation from a tribe of like-minded people whose automotive raison d’etre is to have the lowest car and the deepest wheels, and then go to gatherings to talk about it.

But the movement is also egalitarian, and that might be its strongest appeal. You need to mechanical know-how to do any of this, just enough money to buy some rims, rent a fender roller, and whatever crap coilovers you can find on Ebay that will drop your car to the ground. If there’s anything left, add a roof rack. Where else could anyone consider a Corolla as “dope” while keeping a straight face. You don’t even need to be a good driver, because most of the time your car is parked. Of course, pretending you’re hard and making a video of your car crawling along at a snail’s pace is essential.

On the other hand, it’s hard to take pictures at a track day, although you might be able to take a boring in-car video with the right equipment. Your new swaybars, tires or alignment isn’t going to impress anyone. Most of the “cool mods” you can do to a given car makes it ineligible for most timed amateur competitions. Figuring out a proper setup for your car takes time, effort, maybe a bit of math. Quite often, you’ll find that cool Japanese parts are actually crap, and the boring, off-the-shelf stuff from the Tire Rack is usually more than adequate.

“Go fast, or suck” is a maxim often thrown around on the Miata.net message boards. What will you do?