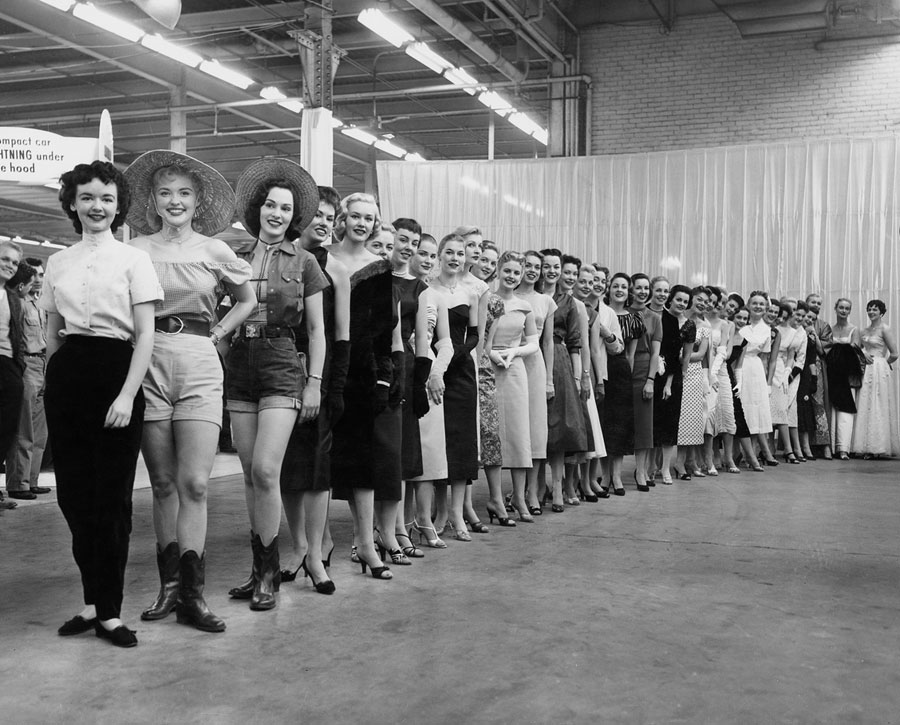 “Sirens of Chrome: The Enduring Allure of Auto Show Models,” by marketing maven Margery Krevsky, was recently named Book of the Week on Double X. I’d already bought it; I felt like I had an obligation to support a book written by a woman that had a respectful (bordering on reverent) perspective on auto show models and the hard-earned knowledge to back it up. By the time my Amazon shipment arrived, I’d already forgotten about it. Like most coffee table books, it seemed the act of the purchase itself had already served its purpose.

I’ve followed Double X, a women’s blog under the Slate/WashPo umbrella, since its inception. Sadly, its editors have never shown interest in automotive content, despite prescient, newsworthy topics with cultural impact, like the ties between the automobile industry and the economy, cars’ impact on the environment, increasing numbers of female car buyers, outstanding engineers like Ford’s Sonya Nematollahi (who designed the Fusion Hybrid’s gorgeous leaf-growing instrument cluster), and, dare I say it, the ridiculousness of Danica Patrick. So at best, Double X informed a few thousand readers that the book exists. At least, it inspired me to finally open the shrink wrap.

A few years ago, when I was optimistic about my future as an auto writer, I wondered why there wasn’t a front runner for a women’s auto media association. As it turns out, there had been. They had a few meetings, presented a couple of awards at NAIAS 2003, and disintegrated soon afterward. I was so intrigued, I did something I rarely gather the courage to do: I reached out. I e-mailed the vibrant, infamous editor of a certain glossy mag, since her name was all over the group’s Web crumbs, and inquired why. She said the women in the group were wary of the ramifications of separating themselves from their male colleagues; however, she gave me her blessing to give it another go. What a position to be in; the informal handing of the reins from a print editor! a muse! a siren!
I toyed with the idea for quite some time, though before I made any significant investments, it dawned on me that, generally, we women don’t really like each other. I already knew that, but in my excitement, that basic understanding of human nature temporarily slipped away.

No disrespect to my correspondent, because she’s been around, but that reasoning sounds like BS. I don’t doubt that’s what was said, but if a gay auto media party can draw upwards of a hundred revelers during NAIAS, the only reason women can’t gather a similar size crowd –and have a good time — is because we don’t want to. Let’s review: The gay faction is more inclusive and less catty than the female counterpart. That’s pathetic.
I suspect we don’t want to work for solidarity because it helps the competition: each other. It’s not exclusive to the auto industry; I’m endlessly amused watching Double X and Jezebel bloggers snipe at each other. Nor am I surprised. I’ve been attending VW shows for ten years, and with few exceptions, every girl there thinks she’s the one and only. It’s a rare pleasure to meet someone who’s an exception, who isn’t in it purely for the attention, who has more to contribute than an inane Twitter feed.

Which brings me back to “Sirens of Chrome.” We have no obligation to be nice to a book that’s pretty, but doesn’t have much to say; that was my impression based on its reviews. I should know by now not to pass judgment so quickly. What’s more magical, for a culture aficionado, than being shown a time in which people actually dressed up to attend an auto show?

The alliteration-heavy prose (perhaps wisely) shies away from hard-hitting commentary or an overall conclusion; to avoid breaking the spell, the reader’s gently delivered to a threshold of revelation. However, the retrospective is solid. Before actresses and athletes commonly found side work as “product demonstrators,” suffragists filled the role, driving cross country in rebellious short and comfortable dresses, showing American women how to change tires and replace spark plugs. Reproductions of the artwork, a collection of carefully-sourced vintage auto show posters, should be decorating my office. It wouldn’t hurt to surround myself with the imagery of muses and goddesses; I could certainly use the inspiration.

Maybe that’s the connection: we all want to be worshiped. We all hope we’ll be immortalized, and only a few of us have quite figured out the proper path. There was only one Spirit of Ecstasy, after all, and that was Eleanor Velaso Thornton, the inspiration for Rolls-Royce’s famous hood ornament, created nearly a hundred years ago. Styles and trends have evolved immeasurably over the last century, perfectly documented in “Sirens.” Women, however, have not.

“My basic rule of thumb is, if it works against you to be a woman, ignore it. If it works for you, take it,” advised my redheaded siren’s e-mail.

Or, as Krevsky quotes author and editor Frederick Lewis Allen: “…Each of them, as an influence, was played upon by all the others; none of them alone could have changed to any great degree the folkways of America; together their force was irresistible.”