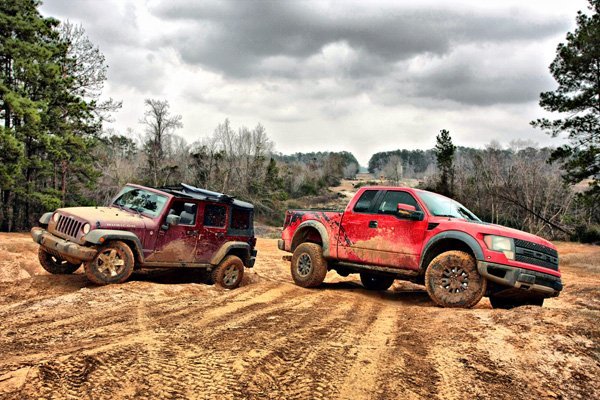 Photos and video by Zerin Dube.

Special thanks to Tim Goldmann, Adam Barrera of Highmileage.org and Matt Hardigree of Jalopnik.com for assisting with the video and driving duties.  Extra special thanks to Jonathon Edwards for being our guide and spotter.

Speed:Sport:Life recently managed to acquire the keys to both a Ford F-150 SVT Raptor and a Jeep Wrangler Unlimited Rubicon. Our sole mission: to go out and have fun with them. Unfortunately, Houston doesn’t have the awesome rock trails and canyons of the Moab to drive the Wrangler or the deserts of Southern California to run the Raptor in at wide open throttle. Around here the canyons are made of concrete. Our trails are narrow, lined with pine trees, and full of thick mud. We knew the Wrangler would cope, but how would the wide, heavy Raptor run? 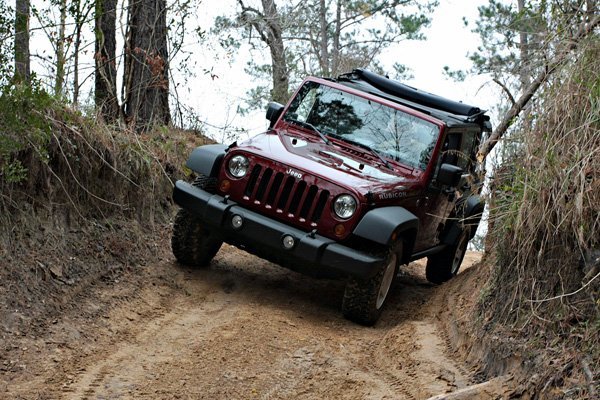 The Jeep Wrangler has been the gold standard in off-roading for over 40 years, earning a reputation of being the finest go-anywhere off-roader you can buy from a showroom. The latest “JK” generation Jeep Wrangler is no exception. Not only has Jeep made the Wrangler more livable on the road, but also even more capable than previous Jeeps off-road. Our top-of-the-line Wrangler Rubicon Unlimited was completely comfortable with just about any type of off-roading you can throw at it. It comes standard with Dana 44 heavy-duty axles and locking differentials front and rear, as well as electric disconnects for the front sway-bar to give the Jeep more articulation when needed. The Wrangler Rubicon’s 4:1 low range transfer case, skid plates, and beefy 32-inch BF Goodrich Mud Terrain tires help it easily crawl over rocks or plow through the thick mud with ease. Combine all this with the Wrangler’s relatively compact size and you have a vehicle that you can drive straight from the showroom to just about any off-road situation you can throw at it. 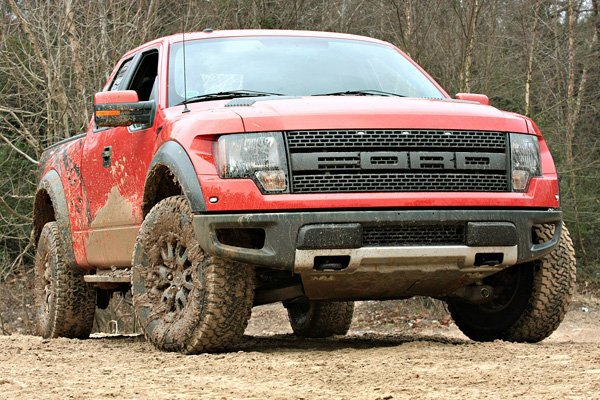 The Ford F-150 SVT Raptor is the newcomer on the block but has already made a rep as the best factory off-road desert runner available. The looks of the Raptor alone tell you that it’s built to conquer the deserts of Baja, but the variations from the standard F-150 are significant. For starters, the huge fender flares wrap the Raptor’s seven-inch wider track and special 35-inch BF Goodrich A/T tires. SVT engineers then added unique upper and lower A-arms, tie-rod and half-shaft joints. The Raptor’s Fox Racing shock-absorbers are specially designed and tuned by SVT engineers to increase stiffness under compression to keep the Raptor from bottoming out over jumps or ruts. All the magic the Ford SVT engineers worked on the Raptor’s suspension results in 11.2-inches of suspension travel in the front, and 13.4-inches of travel in the rear. SVT really has delivered a Tonka truck in full-scale with the SVT Raptor.

To test all these goodies and put these two off-roaders through their paces we headed to Spring Creek Off-Road in North Houston. Since the S:S:L staff is more familiar with race tracks than off-road trails, we called upon the guidance of experienced off-roader, Jonathon Edwards and his awesome Jeep to guide us through the tight trails. 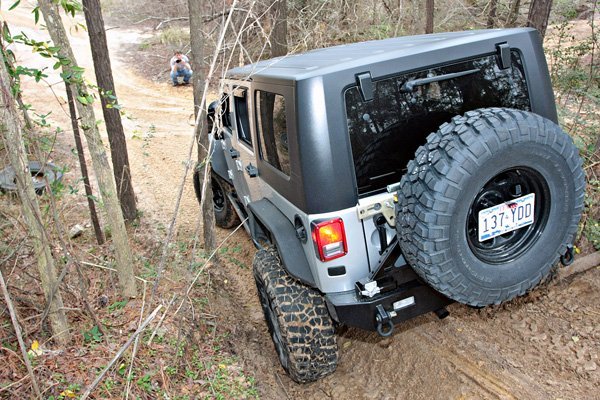 On the trails, the Wrangler had no problem squeezing through tight spots around the various trees and down the hills. The SVT Raptor eventually made it through all these tight spots, but took a lot more care to squeeze through. Some of the spots were so tight for the Raptor that there was less than an inch of clearance on either side of the Raptor — even with the mirrors pulled in. 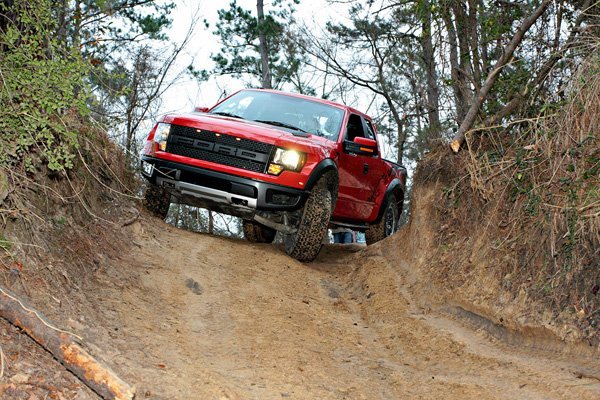 What the Raptor gives up in size it more than makes up for in brute force. The 310-hp 5.4-liter V8 was plenty of power to muscle the big truck over rocks and roots, and through fairly deep water crossings. Though the Raptor was keeping up with just about everything we could throw at it on the trails behind the Wrangler, there was just one thing we knew that the Raptor could do which the Wrangler couldn’t…jumps, and lots of them. Set the Raptor’s ESP to Off-Road mode, aim for a jump, mash the throttle and hold on tight because the Raptor loves to be airborne. Landings were delivered in absolute comfort to the truck and passengers thanks to the aforementioned custom Fox Shox. 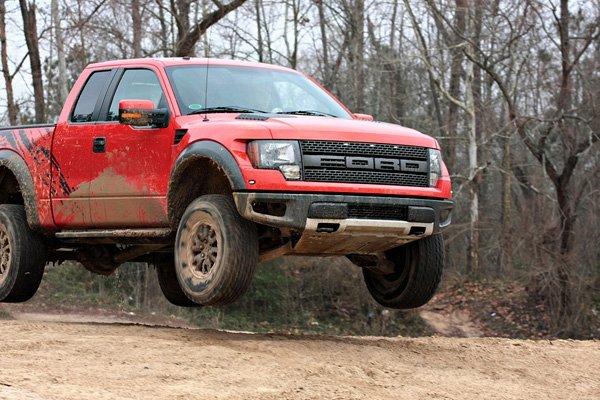 After about five-hours of hooning it up in both the trucks, we decided to call it a day. We made a lot of friends out on the trail who were equally impressed with the monster truck looks of the Raptor and the out-of-the-box capabilities of the Wrangler Rubicon. More importantly, we kept both vehicles shiny side up, though the shiny sides were covered in about 200lbs of mud. Both the SVT Raptor and Jeep Wrangler Rubicon did beautifully on the types of off-roading we do here in the forests and swamps of Houston. 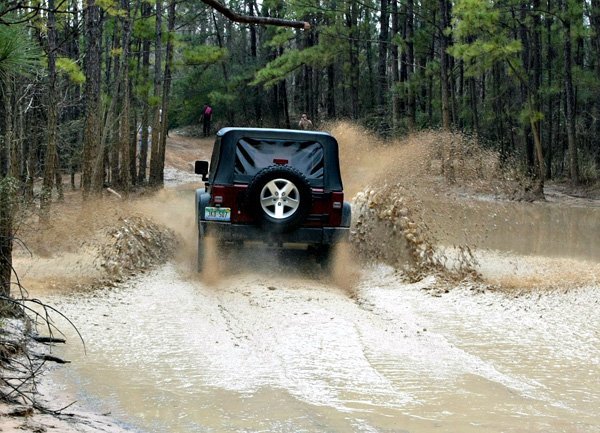 While the Wrangler easily handled everything we threw at it, we expected it to. The Wrangler is absolutely the Swiss Army Knife of off-roading and is designed for what we put it through. The Ford SVT Raptor on the other hand wasn’t built for this type of off-roading, and honestly we didn’t really expect it to do so well in the mud and trails. But it did, and it did it with flying colors. Though it took a little more finesse to get the Raptor through the obstacles we encountered because of its size, there was nothing that it struggled with off-road. 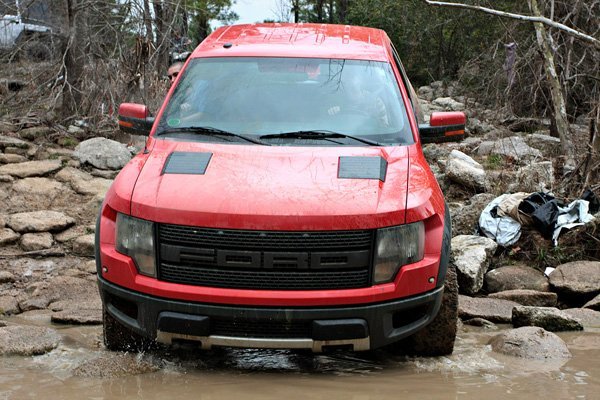 We weren’t looking to declare a winner here. Both the Jeep Wrangler Rubicon and Ford F-150 Raptor SVT proved themselves to be extremely capable off-roaders that anyone with a sense of adventure could have fun with. We can’t wait to find an excuse to go hit the trails in either one of these vehicles again in the near future.

Jeep and Ford provided the vehicles featured in this article  for the purposes of this review.