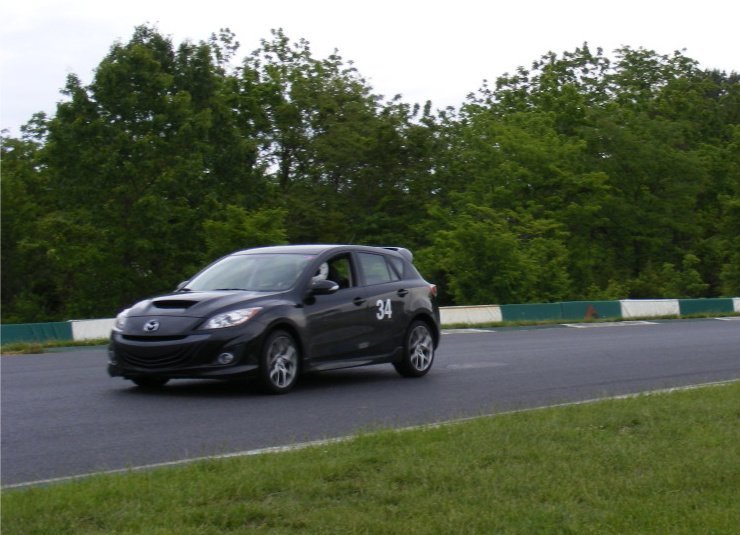 As I ease my way around Summit Point Motorsports Park’s Shenandoah Circuit on my morning out lap, everything feels familiar. It was a year ago this month that I last drove this course in my 2008(.5!) Mazdaspeed3, and for a few moments it’s as if nothing has really changed. The car feels good–better than my own, in fact–and everything is clicking. I’ve just picked up where I left off.

I glide over the Ski Jump at a leisurely 60 or 70 miles per hour and brake gently on the uphill section that follows. As I prepare to dip into the next turn–Shenandoah’s replica of the Nürburgring’s famous Karussell–I decide to just leave it in 4th and sort of coast on through. I bend it in and breathe off the throttle and the car slows abruptly.

Thinking I’ve misjudged the throttle travel, I ease back onto the pedal. The car responds by slowing down more. Maybe I’ve bogged it down too much? I blip the throttle to grab third gear. Nothing. Just another stumble and deceleration. I glance at the cluster just in time to catch a blink of the stability control indicator. What the hell is going on?

Out lap or not, there’s still traffic. I look in my rearview and the S2000 that had been pacing me eight or ten car lengths back is tippy-toed on his brakes as a result of my unanticipated slowdown. I can’t stay out here like this. I ease through the rest of the lap and pull into the paddock. I pop the hood and check for vacuum leaks. Nothing. Everywhere but in the Karussell, the car feels fine. But on the banking…

Finding nothing alarming under the hood, I flip off the stability control and head back to the pits. No sense in babying it around. If it’s going to quit on me, it’s going to quit on me. I charge hard up the Bridge Straight, ride it over the Ski Jump, brake hard on the uphill, blip, shift and dive. A stab of the throttle on the banking shoves me back and to the right as the suspension compresses hard on the concrete. I shoot off the exit, feeding in throttle as I climb toward the Corkscrew. 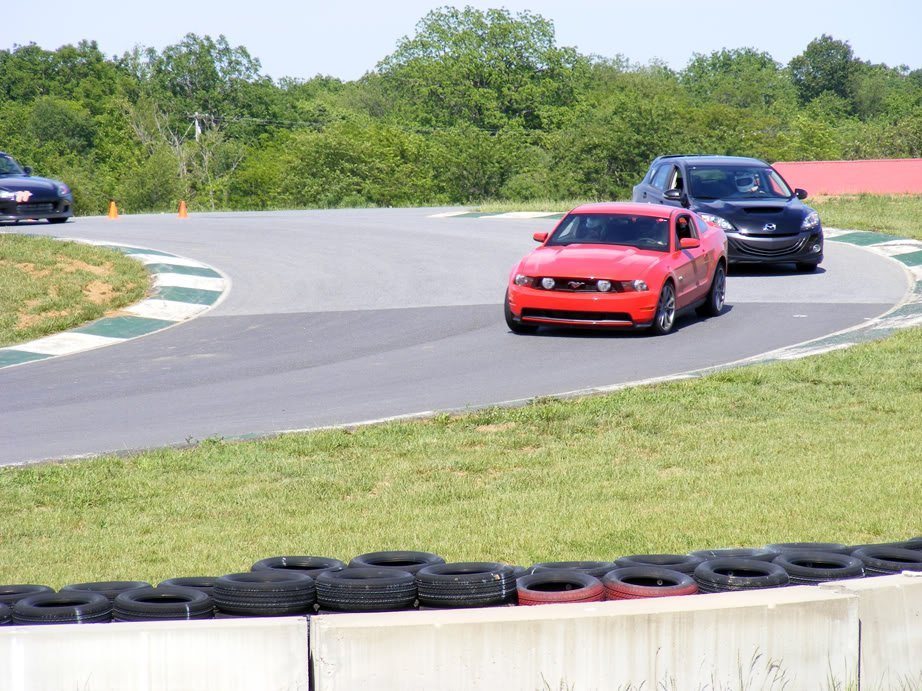 Entering the Corkscrew behind a 2011 Mustang GT.

When you can open the taps and really let this car run, it’s phenomenal. And it’s even quick exactly where you wouldn’t expect it to be. Slow, off-camber corner entries? No problem. Fast sweepers? Bring ’em on. Shenandoah is a technical track that favors cars that transition well, but the Speed3 could hang with better hardware in the tricky parts without giving me a scare. And the brakes? Unbelievable. Lap after lap of hard braking resulted in only the slightest fade. Repeated stops from 100-110mph on the back straight going into the Loop were child’s play. Even with all four tires squirming on their fresh tread, there was never a pucker moment when the stoppers were called upon to do their thing.

But where the 2010 really shines is in the suspension tuning. The car is far less nervous over poor surfaces and offers up substantially improved grip in all conditions. The Dunlop SP Sport 2050 tires (now in 225/40R18 vs. the outgoing 215/45R18) are well-suited to performance driving on the street and very competent on the track. They’re at least as grippy as the Bridgestone RE050As that were standard equipment on the older model, and also boast a substantially higher treadwear rating. Two days of track duty put a noticeable feather on the outer blocks of the front tread, but overall depth only seemed to differ by 1-2/32nds front-to-back by the end of the weekend–perfectly acceptable for a street tire. If they even last half as much longer as their ~70% treadwear advantage suggests, they’re a significant improvement over the Bridgestones.

In addition, Mazda fixed one of the biggest issues with the car’s power delivery. The drop-off in torque above 5500 RPM is no longer as pronounced as it once was. You’ll still find yourself searching for a higher gear a little sooner than you might expect given the car’s 6700RPM redline, but you won’t be performing pelvic thrusts in the driver’s seat, urging the car to bring back all that power it just took away from you.

The overall result is a car that transitions better, puts power down better, and just plain feels better, but doesn’t seem to really go any faster, which isn’t really all that surprising. The power output remains unchanged–263hp and 280 lb-ft from a mildly revised 2.3L DISI turbo 4-cylinder–and curb weight has increased, offsetting the additional grip offered up by the new wheel and tire package. All told, improvements in rigidity and refinement have translated to a weight increase of about 90lbs across all 2010 hatchback models, not just the Speed3. 1-2lbs can be attributed to the addition of sound absorbing inserts between the hatch floor pan and the spare tire in the form of an extruded foam donut and a layer of soft fiber insulation, and another 20-30lbs likely come from the switch from single to dual exhaust outlets. While the added weight is disappointing, the NVH improvements are much appreciated. Gone is the off-throttle drone that plagued the first generation.

That’s the 2010 Mazdaspeed3 in a nutshell–a much improved car that falls short of excellence due to changes meant to improve and modernize it. The car negotiates turns and corner exits more fluidly, but the electronic nannies cut in too soon and too aggressively. The shifter has a lighter but more deliberate action and sits closer to the driver’s seating position, but it still lacks the crisp feel of a Honda unit. One unexpected highlight was the steering. It feels more taught and deliberate, which is surprising given that Mazda switched to an electromechanical unit for the 2010. To help counteract the vague responses of an electron-driven power steering motor, Mazda added a third mounting point for the steering rack, so while some feedback has been lost, the overall experience is positive.

But when it comes to some other changes, I was left scratching my head. On the road, the 2010 is quieter and more refined, but it always seems like something’s missing. Leather-trimmed “sport” seats are now standard, but gone are the well-bolstered and comfortable buckets with Alcantara inserts. Instead, we get a compromise that seems lacking in every category it attempts to address. The seats seem to be a hair wider and the bolsters slightly less aggressive. These compromises should make for more comfortable cruising, but the seat bottoms are firmer and the lumbar support adjustment has gone missing, so we’ve given up some track friendliness for no discernible improvement on the street. For me, this translated to bruises on the outside of both knees from bracing myself against the cockpit trim on the track and then a somewhat sore rear end after my long trip home. And just like the first generation, the 2010 lacks heating elements and power adjustment in the seats (even as options), so the net result is a downgrade. 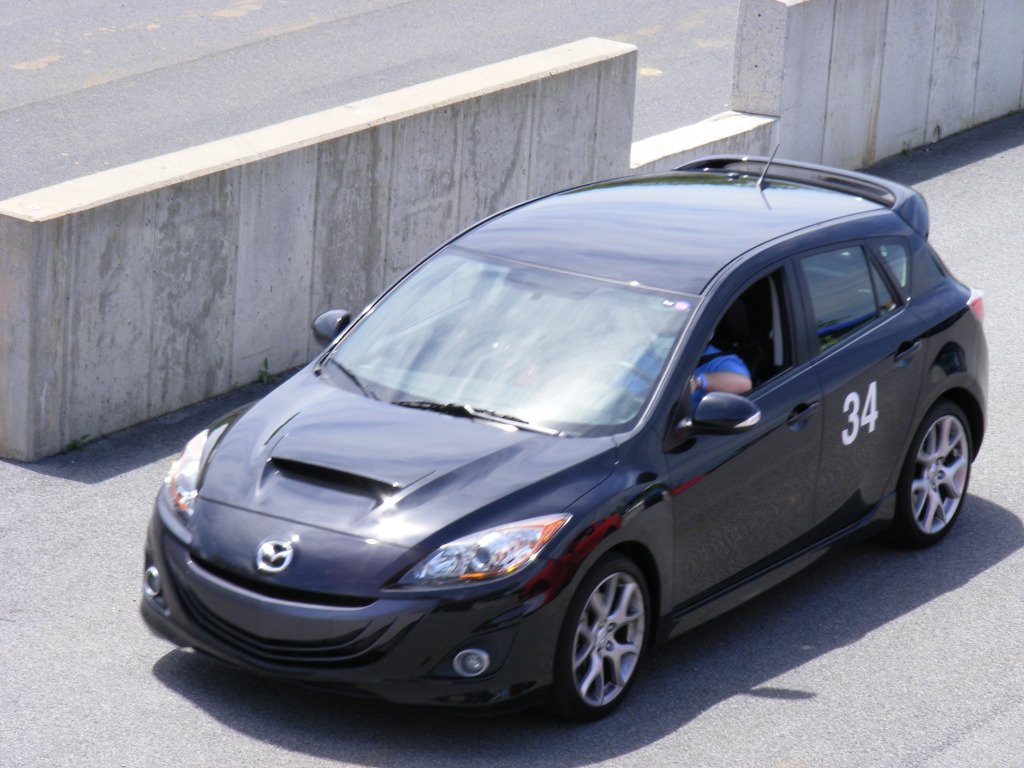 Leaving the pits. An attractive angle, for once.

Our tester came only with the standard equipment, but adding the tech package will get you a pocket-sized navigation screen, a smart key with push-button ignition and Bose audio. We found the multimedia system somewhat lacking in our tester, so that option alone would be worth the extra cash if we were making the call. But where are the HIDs? Not here, unfortunately. Rain-sensing wipers? Also gone.

And then there’s the rest of the feature list. Standard are bluetooth and dual-zone climate control. The dual-zone was absent from the first-generation’s option sheet entirely, however the slow-acting AC compressor seems to have been carried over. Flexible? Yes. But is it an overall improvement? Debatable.

So is the 2010 Speed3 a better car than the 2007-2009 model? Absolutely. It’s a tighter, righter package that delivers all of the fun of its predecessor with less punishment. It may not be perfect, but its faults take little away from its primary mission. If you like fun, you will like the 2010 Mazdaspeed3. 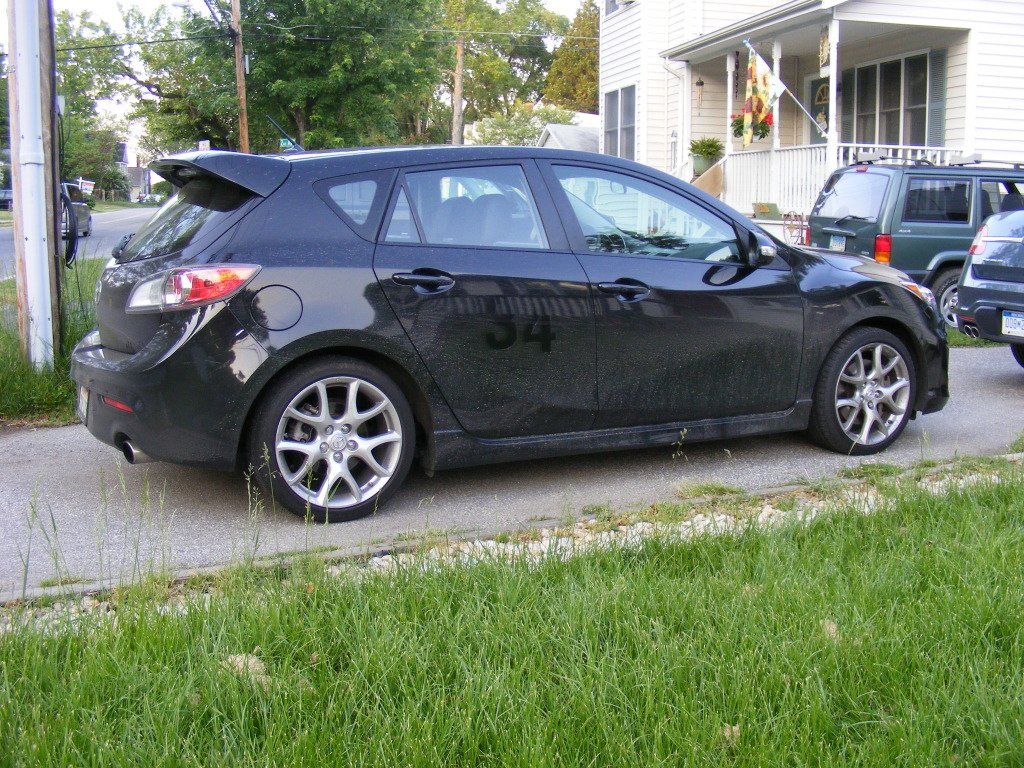 Mazda provided the 2010 Mazdaspeed3 Sport for the purposes of this review. Big thanks to all the fine folks at TrackDAZE for hosting a fantastic event and pretty much letting us get away with murder.