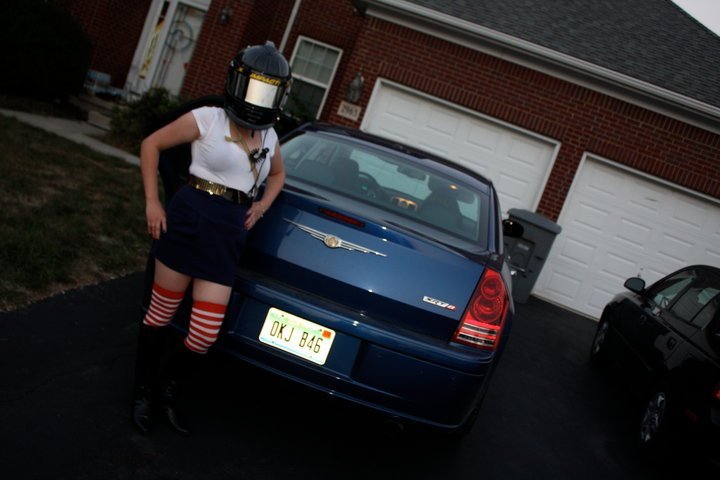 J. BARUTH: With the LY-based 2011 model just around the corner, could our Deep Sea Blue SRT-8 be perhaps the very last LX-platform Chrysler 300 to find its way into a press fleet? It’s certainly one of the most expensive cars in history to wear the Chrysler nameplate, just knocking politely at the door labeled “Fifty Grand”. For that kind of money — less than five hundred dollars cheaper than a new BMW 535i — this had better be a very special car indeed. To find out, we crossed the country at, ahem, a brisk pace, winding up at Virginia International Raceway.


Let me begin by apologizing to the Spec Miata team that was practicing at VIR that day. You may have thought that, since we were running on the “VIR Grand East” course, a 4.2-mile twisty monster that replaces the famous back straight with an autocross-style pretzel chock-full of massive elevation changes, that you’d be able to hold off the big Chrysler and its 20-inch “dubs”. Not a chance. The 6.1L HEMI is too powerful and too insistent, and by careful management of the big Brembo stoppers we were able to blast by you on the short straights (not always with the most courtesy possible, alas) and match you side-by-side going into the next turn.

This is one of the most predictable big sedans to ever swing past 135mph on a racetrack. As you’d expect from a car this heavy on street tires, outright grip isn’t massive, but the inherent competence of the chassis means you can really run to the edge of that grip and beyond. The ESP simply isn’t necessary, as the 300C has plenty of tire for the corner exits and requires very little throttle modulation to stay on course. A conversation with some Mopar tuners at the track indicated that, among the Chrysler cognoscenti, the 300C SRT-8 is reckoned to be a slightly better racetrack whip than the Charger and Challenger variants. The softer suspension actually helps the car stay balanced on-track and makes the responses more predictable. In truth, it was far better than the Challenger R/T we drove at Summit Point last year.

The brakes aren’t infallible, but they are pretty good and if you are careful there’s plenty of stopping on tap for a twenty-minute track session. The side-to-side manual selection mode of the five-speed Benz autobox is okay as well. It would be nice to have a stick-shift in this car, but the core demographic probably wouldn’t sign up. Regardless, this is one of the best trackday sedans money can buy…

…if only because it’s such a fantastic way to get home from the track. The uConnect system works well with the phone, and the Kicker stereo is simply fantastic. The price-to-performance ratio is way beyond what you normally get from factory sound systems, so don’t forget to check that particular box. On the hundred miles of twisty roads separating VIR from Interstate 77, the 300C was unstoppable, blasting past semi-trucks and vacation travelers like the Millennium Falcon. Rarely has a car this big and heavy been this fast on a back roads.

It’s tempting to call this a poor man’s E63 AMG. The platforms of the cars are distantly related, the size and packaging are similar, and the power on tap isn’t too different. The AMG 6.3 is very different from the Chrysler 6.1, preferring to rev instead of twist, but the basic brake-and-turn dynamics are eerily similar. Why spend forty thousand dollars more for the Benz? Well, there’s the interior. The SRT-8 upgrades can’t disguise the basic rental-car nature of the 300’s dash and doors. The instrument panel is meant to exude class but instead looks a little Timex-y. And as good as uConnect is, it’s not in the same galaxy as Ford’s SYNC system. Last but not least, the brash looks of our tester simply won’t be for everyone. This is a car that demands attention, from the black-mesh grille to the “ALCOA FORGED” polished wheels.

I don’t call that forty grand’s worth of difference, so to me the smart money is on the Chrysler. And the used market agrees; older SRT-8 models hold their value in a way that Mercedes-Benz can only dream of nowadays. Isn’t that a kick? The American car holds resale and the German doesn’t. I guess the rules are changing. It’s tough to advocate spending the money on this car when the new 300C is right around the corner — but you’ll enjoy this one if you buy it. Just make sure you talk to your Miata friends ahead of time. You know, so they don’t get upset when you blast by.