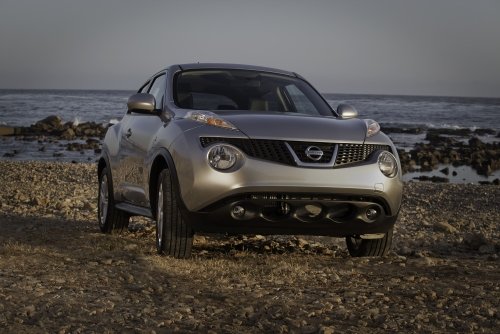 B. Hurd: Until recently, hatchbacks were pretty easily identified. They were compact, practical and efficient. Even when some of them even received sporty, up-rated engines and fancy suspensions and racy-sounding names, they remained true to the classic formula. Golf? Hatchback. GTI? Hot Hatchback, but still a hatchback. Jetta? Not a hatchback. Ford Explorer? Well, it has a hatch, and it’s in the back, but it’s not a hatchback because it’s big and it tows things. Simple, right?

And for as long as hatchbacks have been easily identified, they’ve also been somewhat pigeonholed. You see, in America, hatchbacks are for poor people–broke college students, destitute professors, 45-year-old strippers, prostitutes, desperate single mothers and struggling paper boys.

Oh, enthusiasts have tried to “take back” hatches for decades, but the numbers tell the real story. Volkswagen moved roughly 950 Golfs in November, for example, and even fewer GTIs. Few other manufacturers take the time to break out hatchback sales when multiple variants are offered (Toyota doesn’t even list the Matrix apart from Corolla sales), but at suspected 10-20% take rates, it’s unrealistic to think the Mazda3, Versa, Fiesta and others fare much better.

Lately though, manufacturers have been blurring the lines of the hatchback and compact crossover SUV classes to create something with the size and weight of the former and the wider appeal of the latter. Nissan refers to the combination as a “Sport Crossover”–anything to avoid the “H” word–and have taken the “sport” portion of that to heart with the new JUKE.

By the numbers, the JUKE is a hatchback. The 1.6L, direct-injected, turbocharged engine puts out 188 horsepower and 177 lb-ft of torque. And despite the crossover label, the JUKE only tips the scales between 3,000 and 3,300lbs depending on drivetrain options–Mazdaspeed3 or Impreza territory. You have the option of either front- or all-wheel drive and either CVT or traditional manual transmissions, and the JUKE’s all-wheel drive system isn’t just another mostly-FWD afterthought. Borrowing a few tricks from its more expensive stable mates, the JUKE features a torque-vectoring rear differential with fancy yaw and steering angle sensors to help it deliver up to 50% of available engine torque to the outside rear wheel in turns (think Honda’s SH-AWD). In addition, you can manually select from three AWD operation modes–full-time, automatic, and off–all from a simple toggle switch left of the steering wheel.  Unfortunately, the ideal enthusiast combination does not exist; opting for the 6-speed leaves you with only two driven wheels. To add insult to injury, the front-wheel drive layout sticks you with the Torsion bar rear axle as your only option, while AWD models come standard with the multi-link rear. 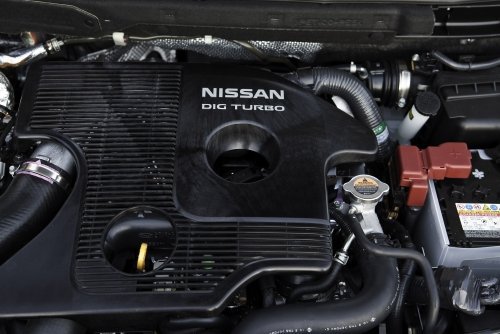 Parked next to a few hatches, it looks like the first guy in the class to hit puberty. It’s a few inches taller, a little more muscular and a hell of a lot more awkward–a Mazda3 with too-dark peach fuzz and obvious pit stains. And when you get behind the wheel, there’s a distinct feeling that it still hasn’t quite grown into its new body. It’s darty–even squirrely–and packs a great punch at first, but when compared to the real stars in the turbo-4 segment, its sub-200-horsepower output feels lacking across the middle and upper rev range. Compounding this, the CVT in our tester seemed to accentuate turbo lag, and breathing off the throttle even a hair results in an abrupt decrease in power to the wheels. It has no trouble getting out of its own way, but if you’re used to the long-winded pull of a V6 or the punch-to-the-chest torque of a larger-displacement four-pot with a bigger snail, you may come away wanting more.

Elsewhere though, the JUKE delivers. As you’d expect, the extra ride height and travel means there’s some noticeable body roll, but nothing disastrous. The chassis encourages you to push harder even when you’re struggling to brace yourself against the door panel. The steering is far less numb than we’ve come to expect from recent Nissan products, offering good progression in effort from low-speed maneuvers to highway speeds. As an added bonus, the power steering assist, along with throttle and CVT programming, can be adjusted with Nissan’s “I-CON” drive mode selector, which offers Sport, Normal, and Economy settings.

And for a little extra “hey, neat” flavor, the I-CON interface shares controls with the HVAC system, the buttons changing from vent selection options and a display showing fan speed and target temperature to a digital boost gauge and I-CON mode buttons. When the vehicle is off, the buttons fade to piano black, offering a sleek, clean look to the dashboard. Cool, yes, and functional. Win-win. 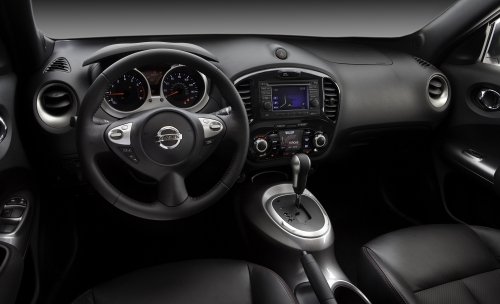 It’s a shame we didn’t have a 6-speed model to compare to directly, but even using the CVT’s tip-shift mode to simulate certain gear ratios, I couldn’t get things to click very naturally. It’s a solid 80-85% there, but another 20-30 horsepower and a traditional manual coupled to the AWD would promote the drive from merely decent to very good.  Whether the 1.6L would be up to the task is hard to say. It already feels a bit strained at ~190hp and doesn’t make the most pleasing noises. With the windows down, the engine has an almost electric whir to it, and lacks the sporty exhaust note that I expected, falling far short of even the VQ’s overly-processed growl. From inside the cabin, the engine just sounds boomy when it’s working hard (which it does often) and doesn’t really offer any rewarding feedback.

Judged as a hatchback, the JUKE doesn’t quite measure up. But as a “Sport Cross,” it offers a compelling alternative for those who want a turbocharged hatchback with a ton of standard equipment and a little more ground clearance. In fact, for now at least, it’s really the only alternative. With the Mini Countryman still a few months away, Nissan has this niche to itself, and it will be interesting to see if they can exploit it.

But if you expect something roomier, quieter and more family-friendly, your tastes may take you elsewhere, perhaps into the new turbocharged Kia Sportage SX, which takes a more CX-7-type approach to size and sportiness. In the end, what really struck me about the JUKE was its value proposition. It’s here that the hatchback roots really show. Our tester came equipped with just about everything save for the Sport Appearance Package (18″ wheels, hatch spoiler, etc.) and only rang the till for less than $25,000. You could easily spend that much optioning out a Mazda3 or Golf and come away feeling like you got a lot less car for your money.