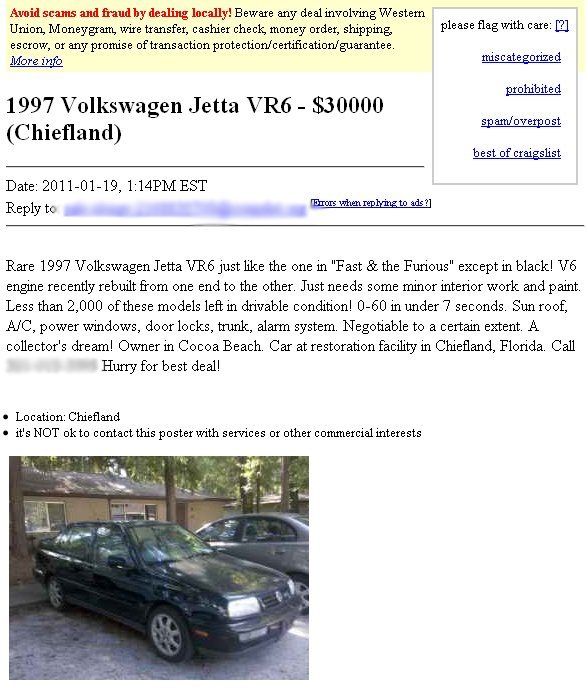 Mrs. Donald failed to complete this particular assignment. If she had, she would have discovered rather quickly that the $22,000 quote for her Jetta’s “restoration” will probably go down as one of the greatest automotive rip-offs in history. Indeed, she would have found that figure suspicious if perhaps she had first bothered to research the initial valuation supposedly given by a professional appraiser in Florida. Extra credit was available for this assignment for students who utilized multiple resources and demonstrated an ability to avoid falling victim to confirmation bias–a phenomenon that an individual with a Master’s Degree in Psychology should be very familiar with, in which the researcher disregards all information contrary to his or her existing beliefs. Extra credit awarded: 0.

Lesson II: The Ad.
Student Grade: 60%
The student demonstrated adequate classified advertising techniques. The ad was short, descriptive and informative. However, there was no documentation of the supposed $22,000 in recent work performed outside of a reference to the engine being rebuilt “from one end to the other.” No link included to externally-hosted pictures or mention of maintenance records.

Lesson III: Responding to Low-ballers.
Student Grade: 20%
Mrs. Donald’s initial responses were acceptable, but as time progressed and potential buyers began to realize that she was actually serious about her asking price, she started losing her cool as it became clear that the increasingly outrageous “bids” were nothing but jokes from members of the largest English-language Volkswagen community on the Web–VWVortex.com. In a matter of hours, vortex members concocted wild background stories for their progressively larger offers. The student failed to understand the intent of their correspondence until it was pointed out to her by a third party. This assignment was a prerequisite for Lesson IV.

Lesson IV: Have Thick Skin.
Student Grade: 0%
The student failed to complete this assignment. Participating in anonymous conversation in most online communities requires suppressing any natural reactionary attitude. As incredulity at Mrs. Donald’s asking price grew and her responses became more combative, speculation about her motives and sincerity grew. This speculation brought on some crude comments from vortex members, comments that Mrs. Donald later found when the third party discussed above sent her a link to the VWVortex.com discussion thread, now in its third or fourth iteration (the previous versions having been moved to the community “Black Hole” forum for various violations of the community terms of use (mostly surrounding the posting of personal information). Rather than simply writing off the community’s attitude as simple juvenile banter, Mrs. Donald elected instead to take it seriously. Very seriously.

Lesson V (Final Project): The Internet Is Serious Business.
Student Grade: 0%
Mrs. Donald completed this assignment, however at no point did she demonstrated any understanding of the lesson or its purpose. The most basic submission should have acknowledged the joking nature of the community’s response and, worst case, included registering for the VWVortex.com community, capped off with posting a small rant about proper etiquette. Instead, the student decided to threaten everybody with an FBI investigation and hate crime charges. The student’s final submission is here: http://www.lgbt-today.com/news-a-articles/featured-articles/129-gay-bashing-is-alive-and-well-and-living-on-craigs-list-and-vwvortexcom

(EDIT: The original article has been removed. You can see a copy of it here for the time being: http://forums.vwvortex.com/showthread.php?5170704-Related-to-the-30k-F-amp-F-Jetta-Lady…)

Kidding aside, what we’ve witnessed here over the past two days is not member of a protected class being discriminated against. This is a person who is deeply embarrassed over a humiliating set of circumstances that befell her of her own volition. Lashing out in this situation is normal, if unprofessional and unbecoming.

Mrs. Donald, you’ve been fooled twice–once by your mechanic and once by members of the Volkswagen community. Yes, members of the community may act juvenile. They may even be hurtful, but nobody said or did anything publicly that constituted a hate crime.

Still others have tried to be helpful, and as you refuse to acknowledge the reality of your situation, it’s hard to feel any sympathy. It’s not our fault you made the decisions that led you here, and while it’s natural for you to desire to lash out, is that really the mature response?

As tired as the cliché may be, you’ve been fooled twice, Mrs. Donald.