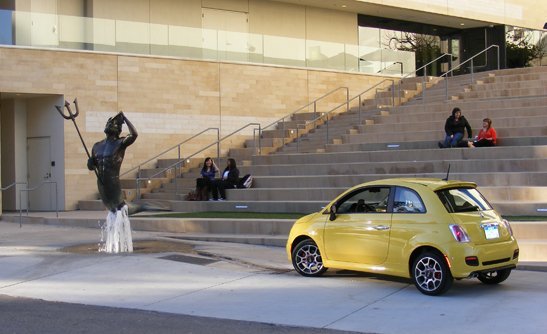 Don’t call it a “Five Hundred.” It’s a Cinquecento. After a 27-year absence, Fiat has returned to the largest auto market in the world with a heritage nameplate on a subcompact that packs some serious style and a whole lot of substance. SSL crossed the country to check out Chrysler’s new compact standard-bearer in sunny southern California, and left quite impressed with the little car that proves that premium styling and performance don’t have to come with a premium price.

Sitting down with the Fiat’s designers could lead you to believe that the car is entirely an exercise of form over function. Great care was taken to preserve the proportions of the original Cinquecento (which was a rear-engined car, mind you) while still incorporating modern design elements and safety features, but some sacrifices were made in practicality. The door window, for instance, was designed to frame the driver’s head and face perfectly so as to integrate the vehicle into your look–make it an accessory, if you will. The downside to this is an enormous b-pillar and a corresponding over-the-shoulder blind spot. Fortunately though, they saw fit to include a parabolic mirror insert in the driver’s side to compensate.

Lead Designer Roberto Giolito explains the evolution of the new 500, from concept to production.

If you’re familiar with the European 500, then you’re well-versed on the Cinquecento’s styling; very little has changed. The most prominent difference is the unique front fascia with the protruding headlamps (vs. the more flush lenses of the European car). Elsewhere, the U.S.-spec car features slightly different tail lights and a revised ride height, but you’d be hard-pressed to tell the two apart at a glance. And while the cute factor is predictably high, the Fiat still manages to look no less aggressive than a Mini, especially with the Sport model’s gunmetal wheels.

The revised front fascia manages to pull off some aggression.

The same basic story carries over to the interior, where the materials are of better quality than most competitors and laid out in a great compromise of U.S. ergonomics and Italian flair. The seats are comfortable–not particularly firm but nicely bolstered–and finished in attractive, high-quality leather or cloth. There’s no Mini flamboyance here; all controls are straightforward, easy to locate and easy to use. Fiat took Mini’s centralized speedometer and tachometer and moved them behind the wheel where they belong, while still incorporating the “chase” effect of the two needles as you wind out each gear. 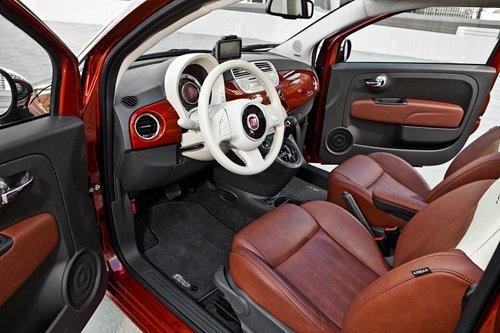 "Lounge" model interior. Plastics are of high quality and all controls are intuitive and easily reached.

On the road, the Fiat is surprisingly quiet–quieter than a Mazda2 and as quiet as (if not quieter than) a Fiesta. Honda Fit need not apply. Mini? Likewise. This is partially thanks to increased use of sound deadening materials in the mildly revised U.S. chassis, along with added window and body seals.  The ride is well-dampened but not harsh. It’s on the sporty side for sure, but far more plush and livable than the Cooper’s. Again, U.S.-specific amendments are at play here, with revised suspension tuning (including stiffer bushings for the rear twist beam and a reworked subframe brace) rounding out the package.

BMW says they’re not worried about the retro Italian stealing Mini sales, but I suspect there’s a bit of arrogance at play here. The Cinquecento’s 101hp, 1.4L MultiAir engine and softer suspension may not carry the same enthusiast credentials as the Mini, but it’s far more well-rounded. The Fiat is just as at home as the Mini on tight mountain roads, providing great steering feedback and entertaining chassis dynamics, but gets the job done with a degree of serenity that the British-themed bimmer just can’t touch. At one point, I found myself winding out third gear in a downhill straight and nosing into the limiter without even realizing it.

And that was somewhere in the neighborhood of 90 miles per hour. This is not just a cheap city car here, folks.

The Fiat rewards smoothness. Sweeping bends can be taken at near-double-the-limit speeds without any drama. Grab it by the scruff and the short wheelbase and higher center of gravity will start raising their voices. Braking late into a downhill, off-camber corner is enough to get the rear end to dance, but between the low curb weight and the rev-hungry engine, this car just begs to be driven without the center pedal. You may think you need it, but you’ll be surprised by how little you really do. Look far enough ahead, and you can slow the car enough just by breathing off the throttle as you approach turn-in at some downright antisocial speeds. The downside is that you’ll need the lower end of the 5-Speed gearbox to keep the engine in its happy place. 98lb-ft of torque is impressive for a 1.4L engine with this power output, but you’ll still need 4,000 RPM to feel any punch at high speed. 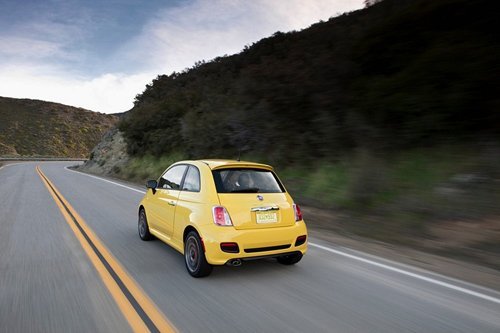 And speaking of gearboxes, the 6-Speed automatic is far better than you might expect. Up-shifts are quick and crisp, even at high RPM/big throttle openings. It’s still no enthusiast transmission, but it’s more than adequate.

But what will it set you back? Considering the refinement and fun factor, the Fiat actually represents a no-brainer value compared to the more volume-oriented cars in the class, with one major caveat. We’ll get back to that later. First, the pricing: A “Pop” model, which is the don’t-you-dare-call-it-a-base-model (base model) offering, starts at $15,500. This gets you steel wheels, basic AM/FM/CD/mp3 audio with an auxiliary input, power locks, windows and (heated) mirrors, cruise control and a multifunction trip computer. The “Sport” and “Lounge” models aren’t progressively higher trims per se, but rather two different premium models. While the Lounge is more expensive than the Sport, it’s best not to think of it as a direct upgrade, but rather an alternative. The “Sport,” starting at $17,500,  is just that, still offering the 5-Speed manual but adding to the Pop’s feature list with premium audio, a sport-tuned suspension, an exterior upgrade package featuring honeycomb grille inserts and aero accents, Bluetooth connectivity (Fiat calls it “BLUE&ME”) and fully-functional iPod integration. The “Lounge” model takes the comfort route, making the 6-Speed auto standard and adding (over the Pop) chrome exterior accents, a glass roof and the audio and entertainment packages featured on the Sport, but without the enthusiast-oriented tuning. It’ll set you back $19,500 before options. You can see how that stacks up against their target competition below. 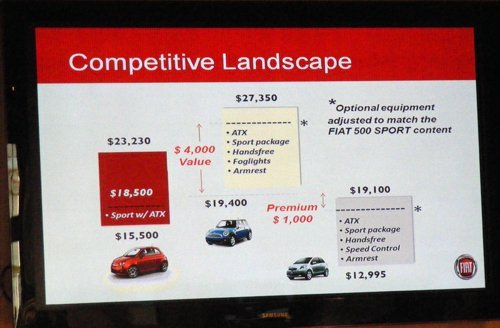 So it looks like a great value for a such a well-appointed car, but as I mentioned before, there’s a catch. Unlike the Fiestas and Fits in the segment, the Fiat takes Mini’s approach to rear seat room. It’s a two-door car with a token rear seat. The designers took special care to note that it’s not a 2+2, but one glance at the rear bench will tell you different. Hatch space isn’t great, but it’s there, but when you go from the Mini to the Fiat, it’s an eye opener. Despite this, the Fiat doesn’t ever feel particularly cramped. Cozy? Sure. Intimate, even. But never claustrophobic.

In addition, it’s hard to forget that the Fiat still lacks a true performance model. The “Sport” stacks up somewhat favorably with the 1.6L Mini Cooper, but the Cooper-S remains in a class of its own. There’s also no convertible yet, though it’s coming later this year (by Q2, if all goes to plan) and the Abarth is due by this time next year. We’re looking forward to it.

For now, we’re very much looking forward to the opportunity to really put the Cinquecento Sport through its paces in a more competitive environment. Hopefully we’ll get a chance later this spring, so stay tuned. In the meantime, Fiat has made an excellent first impression with their new subcompact. Let’s hope the brand can revive a small car program that has been relatively dormant since the last Neon rolled off the assembly line.

Speed:Sport:Life attended a manufacturer-sponsored event and was supplied with competitive vehicles for comparison purposes.