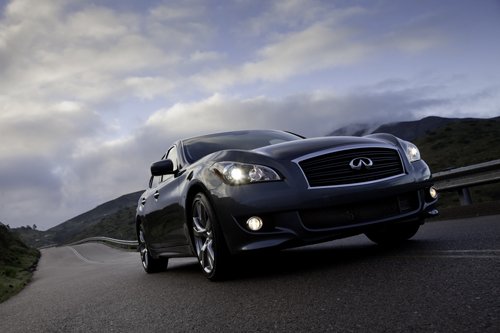 And “luxury car” is right. There’s a lot of “nice” baked into this car, in fact. The seats are comfortable and supportive; the materials are all top-notch; the Seven-speed automatic transmission is smooth and quick. The V8 displays none of the NVH issues present in the much-maligned (and often unjustly so) 3.7L V6. This is everything Nissan does right, all in one sleek package.

Oh, and it’s fast. Given its power and weight, it could just about go spec sheet-for-spec sheet with a 2010 Challenger SRT-8 (of which I’m also quite fond). It’ll do 0-60 in about five ticks flat, and unlike its 3.7L siblings, makes undeniably beautiful noises in the process. Kill the traction control and bury the throttle from a dead stop and the rear end slithers menacingly before biting. It’s a Japanese take on Europe’s version of a muscle car, yet it feels deliciously American when you want it to. But the instant you dive into a decreasing-radius turn a bit hotter than you’d like, it sets in with unexpected poise, rotating brilliantly and aligning just the way you want for corner exit. The steering, which on first impression seems a bit distant and vague, suddenly feels spot-on. If it’s American at the stop light, it’s European on a two-lane.

When, you might ask, is it Japanese? Whenever it falls to your senses. Gadgetry? Check. Ergonomics? Quirky but workable, just like you’d expect. And the styling? Oh, you bet. From the curvaceous front fenders to the swooping rear quarters, the exterior just oozes an organic excellence that can never for a moment be mistaken for a Western design. Inside, it’s the same story. The controls on Infiniti’s now-entrenched waterfall center stack are flanked by beautiful Japanese White Ash (with genuine silver accents). Yeah, that’s right. The wood twinkles. It’s fantastic.

Our press tester came moderately equipped, boasting the Deluxe Touring and Technology packages, but neither of the Sport bundles. This netted us the Bose 5.1/16-speaker audio system, Infiniti’s “Forest Air” active ventilation, a faux suede headliner, intelligent cruise control, lane departure warning and prevention, “Active Trace Control” (brake-assisted cornering) and scores of other doodads. Rounding it out was a set of accessory 18″ wheels. Attractive, sure, but they didn’t quite fill the M’s massive wheel arches. For that, you’ll need the Sport package and its 20″, ride-punishing boat anchors. 18″ wheels suit this car perfectly, providing a smooth ride without sacrificing feedback. It may not be as supple as an E-Class or as cleanly cut as a 5 Series, but it’s sporty without leaving much to be desired, and that counts for a lot.

When it comes time to use those gadgets, there are some minor quibbles. Infiniti’s two-tiered center stack often leaves the driver searching for an out-of-place feature, and reaching from the touchscreen and its accompanying knob to radio controls at the base of the bottom tier can be confusing. A lot of this can be eliminated by spending time learning all of the voice commands and shortcuts, but sometimes you’re sick of hearing a particular jingle and just want to change the G.D. station, and that may take a second or third glance the first dozen times you do it. And the “Eco Pedal,” if you’re curious, is simply a resistance modifier for the accelerator. Yeah, you read that correctly. It makes you push harder in order to listen to that delicious V8. Kill it with fire. 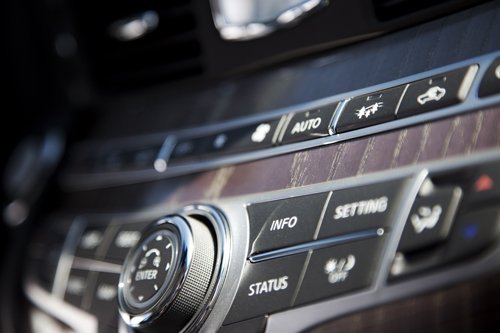 Japanese White Ash wood trim with genuine silver flake. Also visible is the button for the incredibly silly "Forest Air" ventilation system. Hint: It's the one with the trees on it.

Like I said though, minor quibbles. As it turns out, “nice” sums up the M56 quite neatly. For all of its muscle-car attributes and squat-and-go antics, the Infiniti is a very pleasant place from which to observe passing mile markers. At $67,775, our tester doesn’t exactly represent the bargain end of the midsize lux segment, but the value proposition still gives it a slight edge over its direct competitors. An equivalent E550 or 550i will run you $70k. ~$2300 may not seem like a huge gap once you’re adding on options like radar-guided cruise control or trying to decide whether you prefer real silver or carbon fiber in your dash trim, but it is what it is. And if you want a GS, well, you’re sniffing up the wrong tree with any of the aforementioned cars, and it’s outclassed in just about every way by the others in this segment.

For many buyers, this segment represents a lot of subjective desires rather than objective qualities. Some people just want a Benz or a BMW (or a Jag or a Lexus), so they buy the badge and spec it out. Others are looking for the best lease deal. Still more just want the one that costs the most. The Infiniti may fit the mold for some of those buyers, but there are some buyers out there for whom the distinctly Japanese styling and delicious powertrain make all the difference, and it’s refreshing to drive a Japanese luxury car with distinct, shameless character. The M can stand apart on any number of qualities, but it’s as complete of a package as any competitor, and that makes it easy to like.