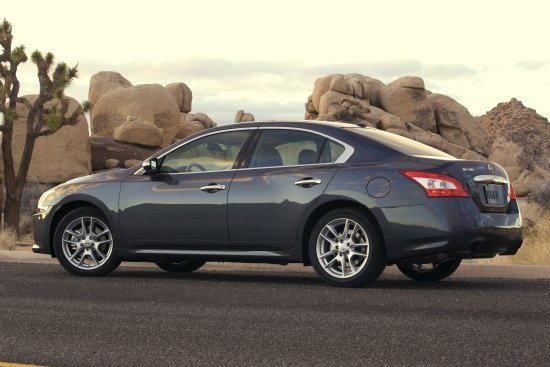 Nissan’s “Four-Door Sports Car” has come a long way from its humble midsize roots. It has been, at various times in its life, a great driver’s alternative to the typical family car, the single most noteworthy car in an otherwise-iffy lineup, and, for a brief time recently, something quite vanilla and unremarkable. Today, the Maxima seems to be back on track, and while it may be Nissan’s attempt to take back the 4DSC tagline, that’s really not what I found so appealing about it. If after reading this article you think that this is the next car for you, be sure to visit your local Nissan Dealer to organise a test drive!

Given its size and somewhat unimpressive platform-share roots, the Maxima carries itself quite well. It drives quite a bit smaller than its dimensions suggest, which was quite a pleasant surprise. Our SV model loaner came equipped with 18″ wheels shod with 245/45R18s. All-seasons though they may be, that’s more than enough tire width to keep all 3500lbs of Maxima planted securely on the pavement. Even without the available sport package (and its attractive 19″ wheels), the ride tends toward the sporty, with body roll well-controlled and surface changes transmitted accurately, though not intrusively. The size also means that if you end up shipping Nissan cars around, for long distance moves and the like, then you can easily keep costs down. 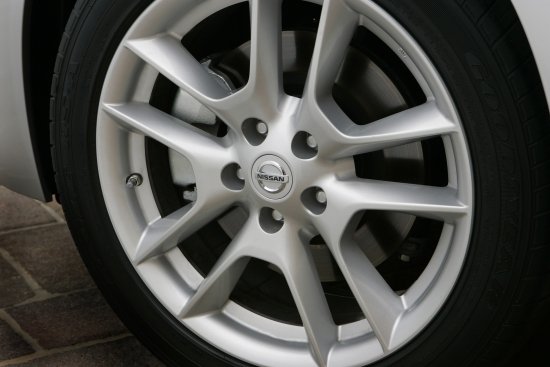 On the flip side, though, is a common complaint I’ve had with recent Nissans. Aside from their explicitly sporty offerings (the Z and the JUKE, specifically), steering feel seems to be non-existent. The Maxima’s feedback is better than that of the Altima 3.5 SR I tested last year, but it’s still a bit disappointing for a sedan with supposed sporting intentions. Still, steering response itself is rather sharp, the wheel decently-weighted and the suspension willing and able. A little more communication from the helm would be welcome, but it’s a fairly mild blemish on an otherwise dynamically sound package. That is, if you don’t mind front-wheel drive. If other Nissan/Infiniti vehicles are any indication, the sport package may even be overkill unless you’re desperate for the 19″ wheels.

If you have even a passing familiarity with Nissan’s current lineup, you’re well aware of their affection for CVTs in their volume products. The Maxima is no exception. Equip it however you like, from the $31,500 S to the loaded SV with Premium Package (our model), you get only one gearbox option… the box without any fixed gears at all.

If you’re shopping this segment (and exactly which segment that is, we’ll explore later) and you’ve been deterred by the lack of a more traditional transmission, I ask you to keep an open mind. To say this is to risk having my enthusiast credentials revoked, but I have to express my affection for Nissan’s CVTs when mated to a V-6. These transmissions are an absolute dream behind a torquey motor. Nearly everything you may have experienced with a 4-cylinder engine is null and void in this application. The way the transmission rubber-bands the engine’s power and simply shoves you down the road at a pace determined only by the pressure of your foot, well, it’s downright luxurious. I can only imagine what it would be like to experience this with a V-8, but it would easily be the smoothest, most seamless acceleration one can ask for. No joke. It’s that pleasant. Nissan includes paddle shifters if you insist on playing with simulated fixed ratios, but I never found them all that compelling once I got used to the driving experience. 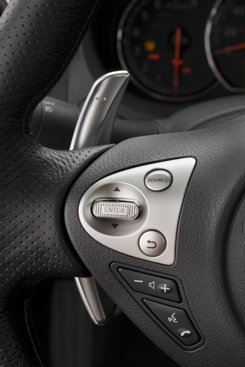 The only problem is that the CVT feeds an open front differential. Not having the full spec sheet in front of me, I can only assume (though I suspect rightly) that the Maxima is lacking a few mitigating features that would otherwise quell what can only be described as relentless torque steer. Get comfortable with the idea of the “peg-leg” launch into traffic if you’re entering the roadway with the wheels turned. Brisk launches aren’t quite as bad, but–and I say this as a Gen1 Mazdaspeed3 owner–it’s there, and there’s not much you can do about it. As for the engine itself, it’s a 290-horsepower variant of Nissan’s near-zombie-like 3.5L V-6. If you haven’t made up your mind about it by now, then I don’t know what to tell you. It’s torquey, it revs freely, and depending on your taste, either makes beautiful music or sounds something like a spoon being run through a garbage disposal. I won’t presume to decide for you. It’s worth noting, however, from an objective standpoint that the drive line does emit some rather curious low-frequency noise just off idle, a thrum that you can feel as much as you can hear. CVTs aren’t known for their superlatives in the NVH department, and I suspect this is a concrete manifestation of that drawback. It’s something to consider.

Again, take what you’re used to with Nissan’s mainstream cars and set it aside. The Maxima’s interior is a cut above anything else in their sub-$40k lineup. If you’ve spent a lot of time in the current Altima, you may think you’ve sat in the wrong car. The leather quality is good, the seats are supportive (rear buckets included), and opting for the premium package even gets you a manually-adjustable thigh support for the driver’s seat. 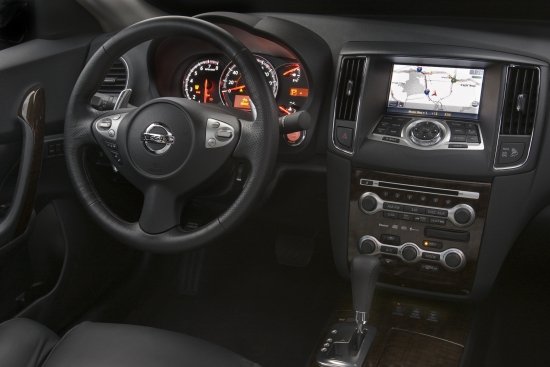 If you’re familiar with the Infiniti dash layout, you’ll be right at home in the Maxima. The cascading center stack under the recessed nav screen (complete with redundant control knob) is lifted straight from their premium line. The sheer overlap of controls can be overwhelming at first–almost every function can be performed in one of three different ways–but hey, choice can be good. There’s remarkably little clutter given the excess of interface options, so it’s hard to fault Nissan for approaching radio tuning like a Choose Your Own Adventure novel.

If there’s any catch, it’s that most of the luxury features, even on the premium package, are driver-only. The passenger gets no thigh extension, no dial-a-temperature climate controlled seat or heated steering wheel (though the presence of a steering wheel on the passenger side may be cause for alarm more than anything). Indeed, Nissan’s range-topping car is really the smallest in many ways. It seats just four, rewards the driver above all others, and doesn’t really offer too much in the way of excess space. Sure, the rear seats beat the hell out of most sedans’ benches, and kids will love commanding you to lower and raise the power rear sunshade, but really, this car isn’t for them.

The Maxima is a great Nissan. More to the point, it’s a good car. But all that good comes at a price, and that price may push buyers toward something with a flashier badge or better performance credentials. Once you’re spending $38k for a car, as you would to get our tester, the field opens up dramatically. Even Nissan’s big brother division starts to look tempting, despite the downgrade in available features at the $40k mark. 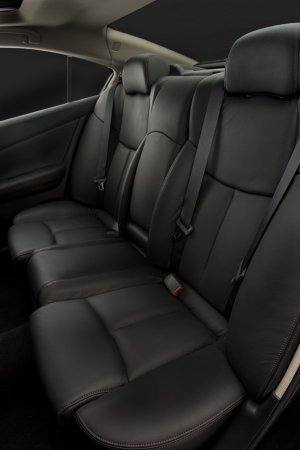 Looking elsewhere, if I had to pick other cars to define the Maxima’s segment, I’d have to go with the Volkswagen CC VR6 as a good comparison. The Volkswagen’s 4Motion all-wheel drive and more traditional 6-speed automatic may appeal to the driver in you, but the Maxima’s performance shouldn’t be discounted, torque steer and all. Dynamically, the edge actually goes to the Nissan, and given the Maxima’s long list of available creature comforts, the interior category doesn’t favor the Volkswagen either. If anything, they’re about equal. And don’t forget that value is in the Nissan’s corner, too. To get into a CC with the VR6 and the extra driven wheels, Volkswagen asks a $2,500 premium over even our nicely-loaded Maxima.

If we had our druthers, Nissan would add a little more Maxima flavor further down the product line. An Altima with even half the Maxima’s interior panache would be a remarkable car for the segment, but when you start to play in the top tier of mainstream sedans, it’s tough to compete with a smaller, more niche-oriented package. The last Maxima may not have been a driver’s first choice, but it fit the role (and the price point) of the large car in Nissan’s lineup in a way the new car really doesn’t. But for its part, the Maxima takes on the small executive sedan segment rather convincingly. For the money, it may not be our first choice, but it certainly wouldn’t be the last.

Nissan provided the Maxima for the purpose of this review.