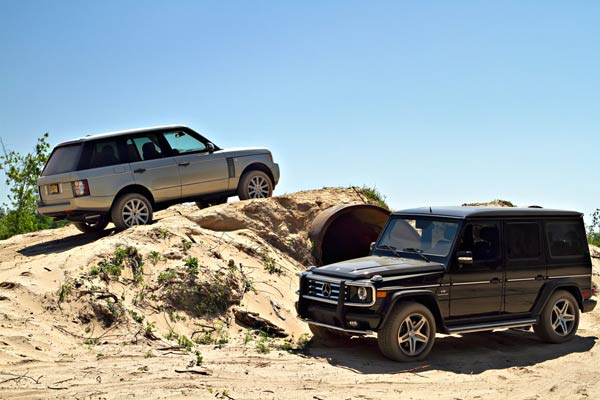 Here at Speed:Sport:Life, we have a nasty habit of coming up with answers to questions nobody had bothered to ask. Whether we’re autocrossing an Accord Crosstour or comparing a Ferrari to a Mustang, we inevitably find a way to alienate anyone with a lick of common sense.

This time however, we performed a comparison test that on the surface seems completely ludicrous. But a deeper look at this comparison reveals that this is the question that everyone buying these vehicles should be asking: How do $100k+ luxury hot-rod off-roaders actually perform, well, off-road? 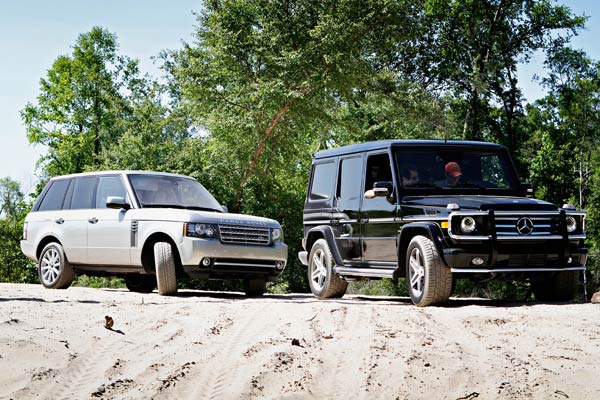 The truth of the matter is the natural habitat for most luxury off-roaders like the Range Rover Supercharged and Mercedes-Benz G55 AMG has become the local high-end shopping mall. Those of us at S:S:L consider this to be a bit of a tragedy as both vehicles are built to be taken from the parking lot of Neiman-Marcus directly to the nearest canyon, desert, or forest.

With assurances to the respective manufacturers that we wouldn’t destroy their vehicles, we decided to get these luxury off-roaders dirty. With Jalopnik’s Matt Hardigree piloting the G55 AMG and me driving the Range Rover Supercharged, we headed to Creekside Edge Off-Road Park located just outside of Houston in Splendora, TX. Creekside Edge Off-Road is to Jeep and ATV enthusiasts what country club style race tracks (think VIR or MSR Houston) are to Ferrari owners, except that cost of admission is only about $20 for the entire weekend. 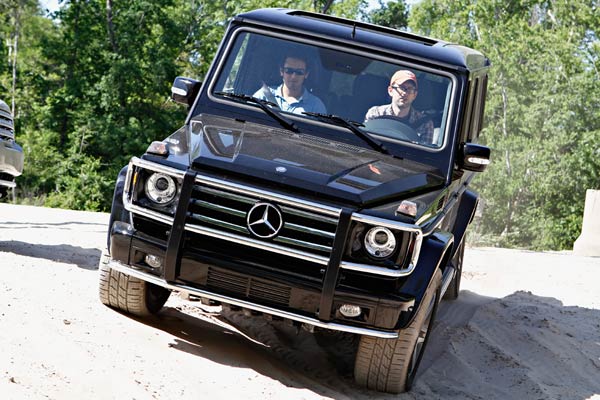 The G55 AMG’s blood line can be traced to a German military design dating back to the 1970s, and really hasn’t changed much over the years. Sure, the interior has been gussied up with an Alcantara headliner, modern audio/navigation, and cushy leather seats, but the fact remains that it still has two solid axles and the ride quality of a Radio-Flyer wagon. What you end up with is the fastest, plushest, street-legal Panzer that money can buy. 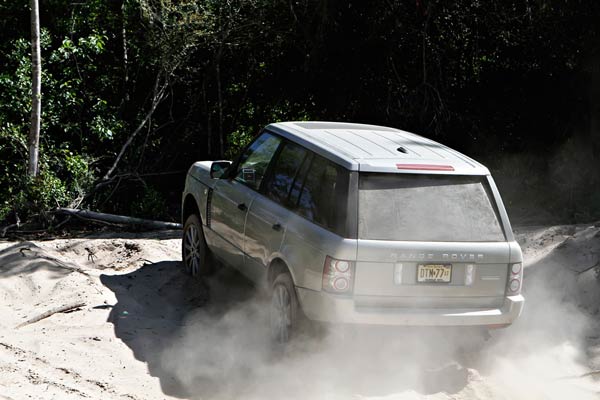 In stark contrast, Range Rover Supercharged is a vehicle that has an interior and ride quality that rivals any of the best luxury cars in the world. Just about every feature in the Range Rover is at the top of the tech tree from the twin-vortex Eaton supercharger to the 19-speaker Harmon Kardon stereo to the computer controlled Range Rover Terrain Response system. Heated and cooled seats make sure the occupants are completely comfortable when out on safari, while the gorgeous leather and wood interior make the Range Rover feel more like a Jaguar XJ than the off-roader it is designed to be.

Setting up both vehicles to go from shopping mode to off-road mode is also as different as they come. In the Range Rover Supercharged, a press of the ride height control is all that is needed to put it in off-road mode, increasing ground clearance from 9.1 inches to 11.1 inches. To set up the 4WD system, a simple turn of the Terrain Response dial to the appropriate setting is all that is needed to control the electronic differentials. There isn’t much for the driver to do besides control throttle and steering since the Range Rover’s advanced terrain and traction programs will do the dirty work for you. 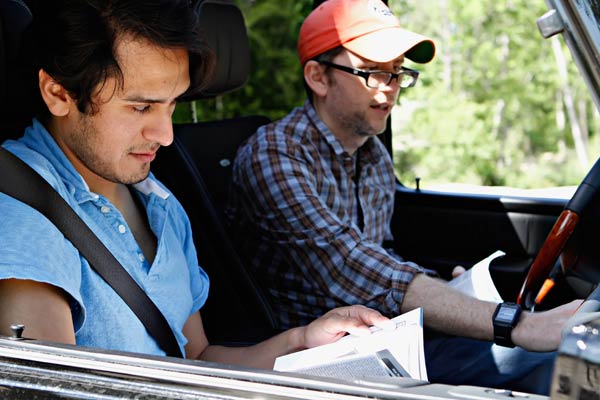 In the G55 AMG though, there are no fancy ride height controls or automated electromagnoplasmaflux differential mechanisms . Instead, the driver is greeted by three rather anonymous rocker switches—one for each of the G55’s locking differentials. Twenty minutes and two owner’s manuals later and the Jalopnikites finally figured out which differentials to lock and when to lock them. With that settled, we were ready to hit the trails.

So, just how did the G55 AMG and Range Rover Supercharged perform off-road? Despite both vehicles being shod with tires that were better suited to magazine slalom tests than dusty bedrock, both vehicles did exceptionally well. Both tore through the sand with ease, and had no problems navigating the trails or steeper hills. Some of the pickier obstacles proved slightly more challenging for the G55. Mercedes-Benz claims only 8.1 inches of ground clearance for theG55 AMG, a full three inches less than the Range Rover in off-road mode. This allowed the Range Rover to navigate proteuding drainage pipes and other detritus without any trouble, whereas the G55 AMG bottomed out performing the same maneuvers. On the flipside though, G55 AMG had slightly better tires more suited to off-roading than the Range Rover giving it the ability to easily climb steep banks and felt much less fragile when traversing trails at any semblance of speed. 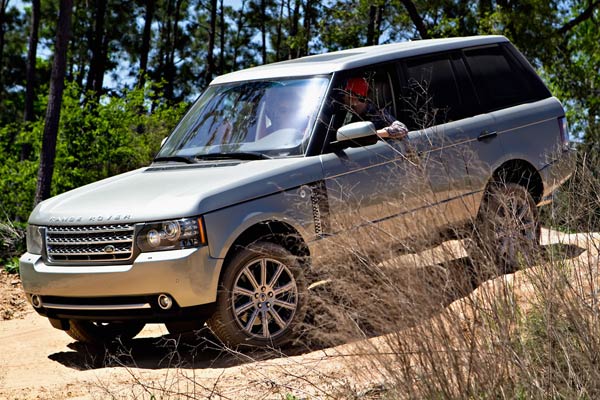 In the end though, both the Mercedes-Benz G55 AMG and Range Rover Supercharged proved to be completely competent off-roaders in the situations we exposed them to. We didn’t do any rock crawling or driving through deep mud because we wanted to test the vehicles, not push them to the point of destruction. We’re convinced though that with a proper set of tires, both vehicles would have no issue tackling tougher off-road tasks. 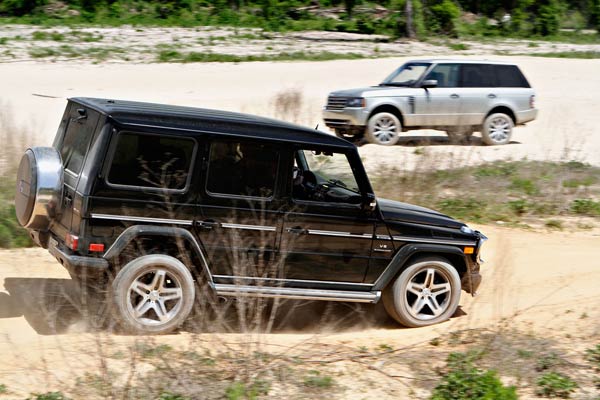 The sad truth of the matter though is that the vast majority of people buying the G55 AMG and Range Rover Supercharged are doing so for cachet within their social circles rather than for their off-road prowess. While that’s perfectly acceptable, it’s a shame that more owners aren’t taking these vehicles off the beaten path. They are a hell of a lot of fun to play with off-road, and the looks we got from Jeep owners watching us taking these $100k vehicles off the tarmac (and competently, at that) was absolutely priceless. That alone makes the price of admission worth every penny.