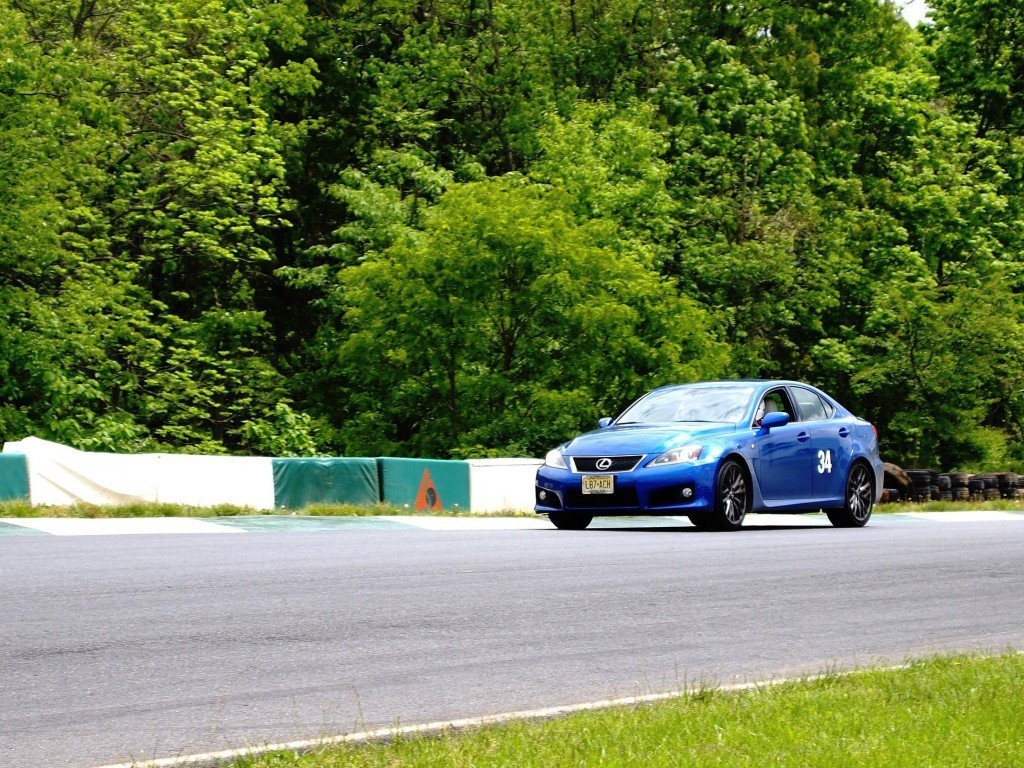 
When Lexus first introduced the IS F in the United States in early 2008, I was participating in a discussion of the results of one of its early comparison tests. One particularly stalwart BMW fan thought the idea of a track-ready Lexus sport sedan to be absolutely ludicrous.  When others pointed out the obvious, that German sport sedans were a staple of track events everywhere, he scoffed at the notion of the Lexus gaining acceptance. “What would happen if somebody showed up in one?” somebody eventually asked. “People would point and laugh,” he declared. As if it were obvious, you know?

Three years later, Lexus saw fit to loan us a 2011 IS F so we could find out just how accurate our bimmer-banging buddy might be. As it turns out, he was partly right. Plenty of people were pointing. I, on the other hand, was the only one laughing.

When is a pony car not a pony car? When it’s a Lexus, of course. To be fair, their spec sheets tend to have nothing in common. The IS F’s hybrid port/direct-injected, 5.0L, 416-horsepower V8 wouldn’t ever be mistaken for the 6.2L small block under the Camaro’s hood, and where the Lexus employs double wishbones up front and a multi-link rear, the Mustang makes do with MacPherson struts and a live rear axle. But when you hammer out of the Trigger and onto the Bridge Straight at Summit Point’s Shenandoah Circuit, the ass-end hanging out on the stripes as the TORSEN limited-slip differential plants both rear Bridgestones convincingly into the pavement, there’s a distinct commonality of character that makes you forget entirely that the badge on the steering wheel is more often at home on upscale Camry clones and near-luxury hybrids.

This blue bomber, my friends, is serious business.

Consider for a moment that this is a 3800lb luxury sedan on shockingly narrow street tires– Potenza RE050A 225/40R19 up front an 255/35R19 out back. Lexus claims they were developed specifically for the IS F, but they behave exactly the same way as any other RE050A–impressively sticky, but relatively easy to overheat. Overcook one corner and you’re a lap away from the traction you previously enjoyed. Yet, mid-corner grip is impressive, and even lightweight track day staples–Miatas and Integras–struggle to gap the Lexus in tighter turns. A silver MX-5 with “FARM USE” tags and an instructor sticker on the windshield puts up the best fight I see all weekend, holding the blue behemoth at bay in the tightest turns, only to give a point-by the instant the track begins to straighten. Point after point, pass after pass, the Lexus steams on without so much as a hint of resistance.

Lining up the next two victims.

Yeah, I was laughing, all right–not at the people I was passing, mind you, but at that mouthy idiot from years ago.

In this group, given the absence of the normally swarming Z06s, the IS F’s ~1:45 pace is untouchable. Seconds tumble off of that time when traffic clears, and the grapefruit-sized front brake ducts channeling cool air to the massive, six-piston Brembo calipers guarantee perfect consistency. Even a full, 30-minute session in the heat of a sunny May afternoon couldn’t bring on any fade. And while top speeds on Shenandoah don’t push much beyond 120mph, the numerous short straights and tight corners make for a lot of on-off brake action where reliability is critical.  Short run-offs and abundant concrete features are placed strategically to greet you in the event of catastrophic brake failure. The track remains relatively “green” all weekend, with frequent showers and increasingly violent thunderstorms washing clean all rubber from earlier sessions, but the Lexus takes to it brilliantly every time.

There are, however, some negatives. Fast and torquey though the Lexus may be, it’s also quite heavy. Whether that’s owed to the automatic transmission alone or to a combination of other factors is hard to say without a manual transmission model to compare it to. Surely the 5.0L V8 contributes a great deal of that bulk, but given the measures Lexus has taken to lighten other components (the 19″ forged wheels are standard, for example), it’s a shame the final package isn’t a little more svelte. Unfortunately, the only way to get a comparable car any lighter is to forfeit two doors–the IS F’s four-door competition isn’t any lighter. And, among other things, weight means wear. The front tires looked rather bleak after our weekend with the car, and if you haven’t looked at the prices for Potenza RE050As lately, you should take a peek. The other optional tire, a custom Michelin Pilot Sport PS2, isn’t any cheaper.

So it’s fast. But how does it feel? In short, excellent. The new TORSEN LSD keeps wheelspin in check, preserving the rear tires and ensuring that the car goes in the general direction you’re pointing when you mash the throttle. The chassis is composed, communicative and responsive. Everything feels immediate, from turn-in response to overall cornering attitude. Driving on a wet track, you’ll know what each corner is doing at all times, and quick, perfectly-weighted steering and well-bolstered seats keep you in tune with the surface. And while our tester was not so equipped, the black monotone interior color will also net you Alcantara seating surfaces–ideal for track work– rather than contrast-tone perforated leather.

The only component that really takes some getting used to is the transmission. While Lexus went to great length to resolve outstanding issues with the earlier car’s dynamics and power delivery, they declined to address the absence of a manual transmission. The eight-speed sequential automatic unit carries over relatively unchanged, and with mixed results. Programmed for fast, rev-matched shifts under hard driving, it’s a little too aggressive for street comfort. The driver may feel inclined to lift off the throttle during up-shifts to curb shift shock, which rears its head more frequently than one might expect. But when you’re hustling, it gets the job done, cracking off rev-matched downshifts accompanied by gnarly barks from the exhaust. I was inclined more than once to picture the Lexus as a bright blue Doberman chasing down multicolored rodents, each fleeing fruitlessly into the corners in an attempt to shake off its hungry pursuer.

Good though it may be, it’s still an almost-traditional automatic. The trick to the IS F’s aggressive shifting is that it only acts like a traditional automatic in first gear. Once you shift up, the torque converter remains locked. The results are mixed, but the idea is that it behaves a lot like a hydraulically-activated manual transmission once you’re moving, but gives you the advantages of slushbox torque multiplication from a dead stop. It sounds good in a press release, I suppose, but on the street it pretty much works like any other gearbox. It shifts itself in “D” and you do the shifting in “M” via either wheel-mounted paddles or the gear selector’s tip-shift feature. And yes, it should go without saying that the car holds gears to the limiter. If you don’t want to up-shift, that’s fine. Just watch your oil temp, a gauge for which Lexus was kind enough to include in the main cluster.

Branching further into the interior, the story sours a bit. The IS is going on five years old, and it shows. The center stack and navigation system date it instantly. The nav and infotainment UI seem to be straight out of an amateur Web site circa 2002. Large, marble-textured buttons on the touchscreen and frequently unintuitive controls combine for a decidedly second-rate experience. Even the navigation maps and voice-overs had a distinctly, I don’t know, “used Garmin” feel to them. Where Infiniti really pushes the envelope in Japanese luxury and tech gadgets, Lexus seems content to cram as many features as possible into a rapidly-aging system. It’s a shame really, because hidden under the antiquated finish are a few handy features. 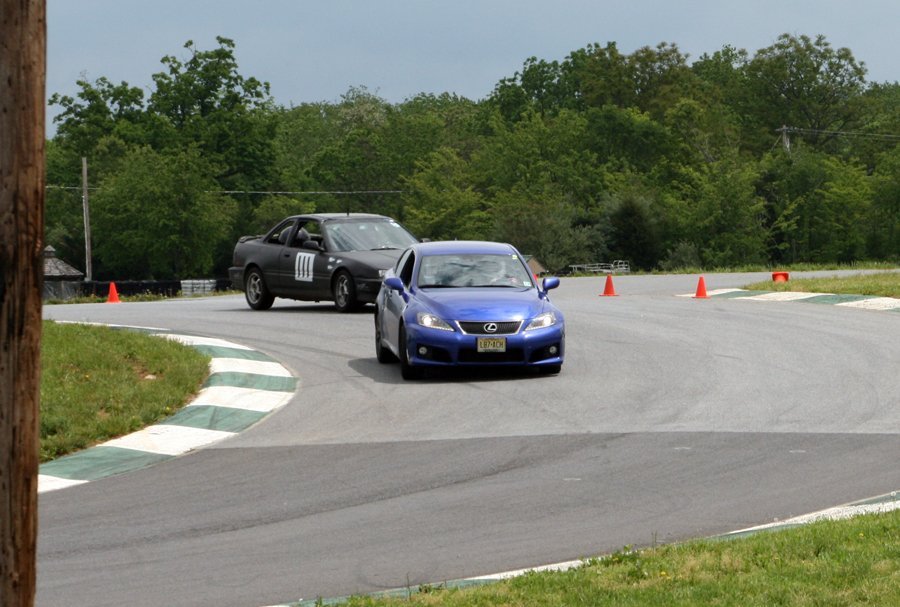 Entering the Corkscrew after a point-by.

Lexus Enform, their alternative to Ford’s Send-to-SYNC feature, is actually quite good. In preparation for our track weekend, I logged into the Enform Web site from my laptop at home, plugged in all of the destinations I’d need for the trip–hotel, winery, track entrance–and sent them off into the endless tubes of the Internets, where they found their way into the IS F’s navigation system for easy retrieval in the “Points of Interest” section. Couldn’t be simpler. But good luck navigating your mp3 collection or a list of potential destinations with similar alacrity. If you have more than a few dozen songs on your iPod and you’re jonesing for some ZZ Top, you’re out of luck.

The absence of high technology notwithstanding, the Lexus otherwise makes a decent case for itself as an entry-level luxury sedan. All the expected amenities are there–heated seats, driver/passenger power-adjustable seats with memory, rear seat ventilation, ambient lighting. You name it, and they’re all standard to boot. Indeed, the only option on our tester was the navigation system, which, given its ho-hum interface, we’d just as well do without. Our $63k example won’t wow a colleague the way a similarly-priced M56 will, but it rewards in ways the Infiniti can’t touch. Given the Lexus’ more direct competition, the lack of emphasis on interior is entirely forgivable. Neither the M3 nor the C63 can claim clear superiority in that respect, with all three cars offering their own variation on “good enough.” Until Nissan decides to get serious about building a sport sedan, the IS F rules the Japanese roost, going toe-to-toe with the Germans without shame.

All in all, the 2011 IS F is the car Lexus should have built three years ago. The 2008 model was a “numbers” car; it looked the part on paper, but didn’t quite deliver on the asphalt. Now, in the waning years of this generation, Lexus has finally transformed it into a convincing alternative to the German mainstays. It’s just a shame they waited so long in the model cycle before redeeming it.

Lexus provided the IS F for the purposes of this review. Big thanks as always to TrackDaze for a great weekend at Summit Point.