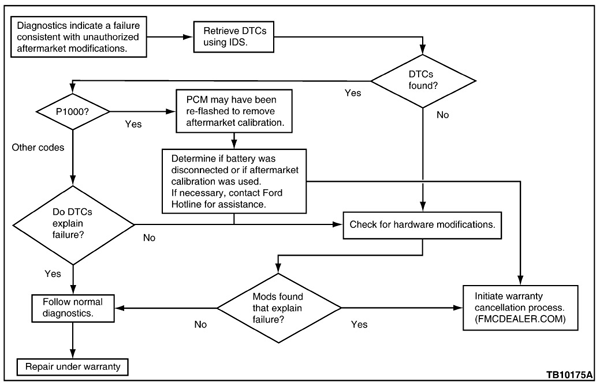 So the big news Wednesday was that Ford issued a TSB telling its dealers how to check for aftermarket parts and/or PCM calibrations on 2011+ Mustangs. Every time something like this comes to light (and this is far from the first such bulletin from Ford or, for that matter, other OEMs), the various and sundry interweb fora erupt in dismay, and folks start trotting out the Magnuson-Moss Warranty Act of 1975 and proclaiming “Ford can’t do that!”

Yes, Ford (or any other auto manufacturer) can do that. Magnuson-Moss was never intended to encompass modifications from factory specification. If you choose to modify your under-warranty automobile, you pays your moneys and you takes your chances. Muck with the PCM cal and you can expect the powertrain warranty to be void. I don’t know why people are surprised by this.

Some background: for 18-plus years, I was one of the guys at “the factory” (in fact, I worked in a succession of Herman Miller and Steelcase cubicles) who designed bits and pieces of the cars and trucks you buy and drive. One of our jobs was to look at all the warranty return parts and determine root cause of failure (if possible), so we could fix them. I’ve got time in at all of the US “Big 3” and a supplier who sold to pretty much everyone.

Back in the day, we’d get people trying to warranty the then-brand-new 4.6L 4V Cobra motors with broken piston ring lands or #7 con rod bearing pounded into mulch and the owners would deny, deny, deny, they’d had a blower and/or nitrous on it until we showed them how we knew they were lying (hint: everything attached to a car leaves a witness mark, and the OEMs know what the fasteners look like after the initial installation – and what they look like after someone’s undone/reinstalled them). Even underdrive pulleys were enough to make one of those engines cook when run hard in a hot climate — yeah, you’d get 6 hp, but you’d drop coolant flow from 58 GPM to 36 GPM at peak engine power, just as it needs all the flow it can get. Oops. Oh, and to the guy who called and asked if we could just pull those high-flow injectors and the aluminum flywheel he’d installed on the destroyed engine but forgot to remove before towing the broken car to the dealer, and ship them back to him via UPS? Yeah, not gonna happen.

But the main thing here is very simple: the manufacturer warranties the car as they produced it. Change the car, and the manufacturer is no longer responsible for the configuration of whatever you changed — you are. The Magnuson-Moss Act was not, and is not, intended to cover aftermarket parts that deviate from factory specification. Its intent then and now is to cover things like oil, filters, bulbs — common maintenance items — and preventing the OEM from requiring their captive brand of maintenance part in order to maintain warranty coverage (see §2302(c) for this section of the Act). You can use a Fram or Purolator or Mobil oil filter that’s equivalent to the OEM filter, for example. M-M does not, and has never intended that the OEM can’t void your powertrain warranty if you put a blower on it and pop the motor, or flash an aftermarket cal into the ECM that doesn’t have the OEM cal’s detonation protection strategy, leading to holes torched in piston tops.

Lots of aftermarket hot-rod companies hide behind Magnuson-Moss. They’re wrong. The better aftermarket companies warranty their product. The best warranty the downstream systems on the car from the consequences of using the product, effectively replacing the now-voided OEM warranty. They do it in writing, up front.

I ran into this all the time with the 4.6L 4V crowd, and the PowerStroke crowd. Folks just couldn’t grokk why Ford wouldn’t warranty their blowed-up engines and driveline parts after they’d increased power output by at least 50%, and often 100% or more over the stock value. They’d trot out Magnuson-Moss like it was some kind of magic shield.

Take a look at US Code Title 15, Chapter 50, § 2304(c). That tells you how an OEM can deny a warranty claim or outright void the related warranty, in the event of modification or abuse of the product, damage caused by the consumer, or failure of the consumer to properly maintain the product.

So why do people think it’s the OEM’s fault that their engines, transmissions, etc. cannot reliably handle power outputs well beyond the OEM power/torque rating? There’s this perception (and yes, I’m aware that perception = reality for most folks) that the OEMs (and this goes for pretty much all of them) somehow build a lot of extra power-making capacity into their engines, and “detune them” for [insurance, liability, cost-cutting, fuel-economy, emissions, some combo of the above] reasons, and all one needs to do is, say, put some bigger injectors on it and flash the ECM and voila! You’ve unlocked the hidden potential of the engine The Man doesn’t want you to have.

There’s another reason OEMs don’t sell production vehicles with engines tuned to the bleeding edge of their power capability: reliability. Let’s look at a connecting rod. You’re an OEM. There’s a core set of parts that you are required by law to warranty for as much as 15 years/150K miles (California’s PZEV warranty — and it doesn’t make economic sense to make 2 different specs of engine internals). You have a target power output that your marketing requires. Thus, the connecting rod must be able to safely manage S psi of stress from the combination of cylinder pressure and mechanical loading through N cycles without moving into the nasty part of the S-N fatigue curve. You size the connecting rod and choose its material/manufacturing process accordingly, also keeping in mind the price point marketing requires and the mass targets necessary to meet overall vehicle mass targets that effect emissions/fuel economy testing inertia weight class as well as other performance parameters. Do you see the tap-dance involved in keeping all these — and more — parameters met? The rest of the engine and driveline is specified similarly.

Now some aftermarket guy with a PC and a scan tool “unlocks the hidden power” of the engine and increases output by, say 25%. If you’re a 5.0L Coyote engine, in Boss 302 trim and with the TracKey, that’s upping the power from 444 net bhp at the flywheel to 555ish net bhp at the flywheel, and let’s say it’s at the same RPM to take that part out of the equation. How does that happen? Well, you have to make more torque at the given RPM. That means the amount of force imparted to the crankshaft by the connecting rods increases by that same proportion — in other words, the cylinder pressure increases by that amount. This increases the stress on the connecting rod, also by that same proportion. Result? Increasing the stress reduces the number of cycles that connecting rod can take before it fatigues to the point of failure. Depending on the material and design of the rod, and how close to the “knee” in the S-N curve they were to begin with, this could mean the rods only make it 80K miles, it could also mean the rods only make it 24K miles before you’d expect to see failures.

Who gets blamed when guys with blowers, nitrous, aftermarket tunes, etc., start popping the bottom ends out of their engines? Why, not the aftermarket! It’s Ford’s fault that somehow they didn’t design their engine to produce double its OEM rated output without modification.

Regarding the 2011+ Mustang and the TSB released Wednesday, and knowing what I know about the folks involved in the Coyote engine (there are SEVERAL licensed racers, ranging from SCCA and NASA types to NHRA/IHRA drag racers, involved with that engine and with the car), I’m comfortable saying there’s a reasonable margin baked into the engine — and you can see it in the Boss 302 and TracKey tunes above and beyond the base GT tune. But it’s REALLY easy for the aftermarket to exceed that margin — all it may take is a hot day, a “small” 150hp shot of nitrous, and a partially-clogged fuel filter to make it go boom.

This TSB isn’t really different from other statements issued to dealers on previous performance versions of the Mustang, or other models (PowerStroke diesels, for instance) — to be aware of aftermarket modifications that may have adversely affected the reliability of the system they’re being asked to warranty. A K&N filter element in the stock airbox or the Ford Racing cold-air kit (that’s standard on Boss and GT500 models)? No problem. PowerDyne blower? Problem, even though it’s “just a mod to the air intake”.

Anyway, even though I’m not in that business anymore, it’s frustrating that people who wouldn’t think twice about building the bottom end of their Windsor motor with quality parts to support the 15 psi of boost from the Vortech T-trim they intend to install will, at the same time, bitch about how it’s Ford’s fault they can’t double the HP of their PowerStroke tow vehicle without popping the head gasket or scattering the bottom end. And it sounds like some of those same folks are starting to do the same with Coyotes.

Folks, when you have something under warranty, and you choose to modify it for more performance, don’t expect the OEM to honor the warranty on the modified parts or systems (downstream systems included: if you mod the engine, don’t expect warranty relief on the clutch, transmission, or final drive). As I said at the beginning of the article, you pays your money and you takes your chances. And if you’re one of those who will try to pull one over on the OEM, understand that 1) you’re committing felony-level fraud, 2) the OEMs are able to figure out both hardware and software changes have happened, even if put back to stock before hauling the smoldering mass back to the dealer for the standard “I don’t know what happened, it just started running rough and making a knocking noise” claim.