Hyundai’s made good on a slew of promises over the past few years, from improving the build quality of its products to releasing more interesting, appealing and competitive vehicles. But last year, the company set perhaps its most audacious goal yet: hit a Corporate Average Fuel Economy rating of 50 mpg across its entire range by 2025. Hyundai has already made strides in improving the fuel consumption of its vehicles in recent years. Cars like the redesigned 2011 Elantra, which is rated at 29 mpg city and 40 highway, play an important role in helping the company meet its lofty goals. It’s also helping Hyundai build a lot of brand cache, whose ads are already touting the four models they build that achieve 40 mpg highway.

Out in the real world, however, the elaborate programming algorithms and driver aids used by car companies to squeeze every last drop from the EPA’s testing are less relevant. Differing climates, population densities and driving techniques all conspire to effectively turn the government’s ratings into hogwash. Over at fuelly.com, Civic and Jetta owners are reporting real-world fuel economy numbers at or above their combined mileage ratings, whereas Elantra owners are ending up somewhere closer to the car’s city rating. So what gives? To figure out whether the discrepancy is down to the Hyundai’s lower sample size or whether Elantra owners are especially lead-footed, we borrowed the keys to a well broken-in 10,000 mile Elantra GLS and set about creating a ‘real life’ economy test that brings the EPA procedures out into the harsh Florida sun.

It all begins in the city.

The EPA’s city testing procedure calls for a cold-start engine condition followed by 11 miles of stop-and-go driving for an average of 21.2 mph. Our own route covered 10.1 miles of heavy traffic and stop lights, with an ambient temperature of 93 degrees and average speed of 21.0 mph.

For the highway rating, the EPA measures consumption over 10.26 miles at an average speed of 48.3 mph, top speed reaching a scorching 60 mph. In the interests of making our test relevant for non-octogenarian drivers, we decided to up our max speed to 70 mph, stately progress still within the confines of the law. Total distance: 14.7 miles, 91 degrees ambient temperature.

Considering this tester’s own ham-fisted driving style and the fact that we were running the air conditioning during both trips, our real-world results are nothing to scoff at. It’s certainly within the realm of possibility to see the window sticker mileage if you’re really trying. But is there more to this car than simply economy?

For an enthusiast, honestly- no. The inherent problem is that the Elantra seems to have been engineered around one thing: motoring with the lowest outlay of cash over a given number of miles. And unlike the Civics and Jettas of yore, the idea of achieving that goal while still being a competent driver’s car has been overlooked. This isn’t to say that the Elantra is complete rubbish to drive. There’s adequate power from the 1.8L engine, the 6-speed automatic is quick to downshift and unerringly smooth, the interior is comfortable and well-laid-out and the sculpted sheetmetal does nothing to betray its bargain-basement price. Delve deeper, though, and there’s not much substance to back up the style. The steering is quick and light but completely lacks any semblance of feedback. Large bumps upset the suspension, and hard cornering reveals a ‘riding on the bump stops’ sensation. There’s an unsavory engine note and little in the way of brake feel. Lose the red mist, though, and you’re left with a hyperbaric chamber that does something very well the instant you enter: make you think about anything other than driving. 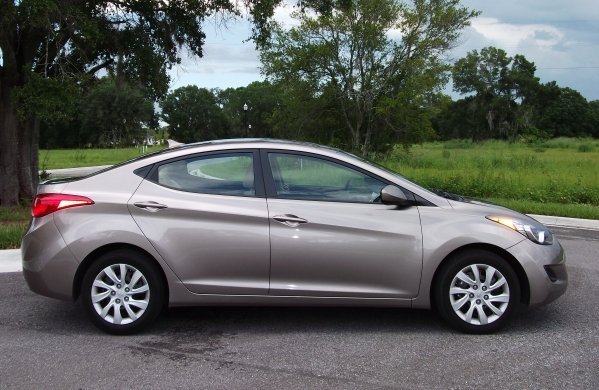 In this last respect, it’s more than reminiscent of the Prius. A car built for drivers that don’t care about driving, who simply want to arrive at their destination using the fewest greenbacks possible. There’s nothing especially wrong with that, but at the same time, enthusiasts will be hoping that Hyundai doesn’t abandon the progress it’s made in building cars that are good to drive in the name of focusing solely on one metric: MPG.