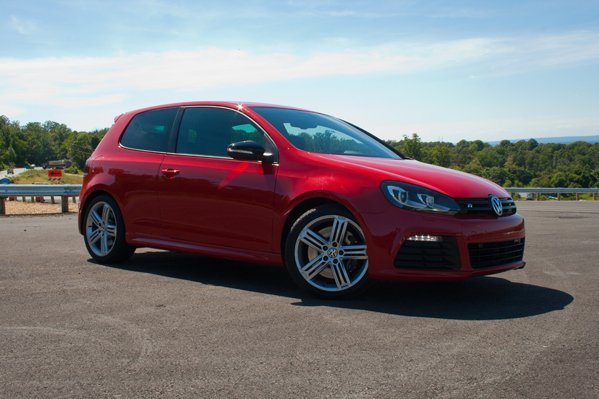 Yes, we’re a little late to the game. Most of the mainstream publications have already been invited to drive Volkswagen’s European market Golf R, but with your humble author’s 9-5 day job and our modest (read: non-existent) travel budget, well, we just didn’t have the opportunity. So when Volkswagen extended an invitation to sample their full U.S. line-up (caveat to be explained later) near their U.S. headquarters in Herndon, Virginia, well, I just couldn’t pass that up. Doing my best impression of modern journalistic largesse, I promptly reserved my space in the event (and my room at the hotel which, mind you, is only about sixty miles from my home outside Annapolis, MD).

What can I say? They don’t give out bonus points for good behavior. Might as well enjoy it.

But first, that caveat. See, when Volkswagen said we could test their entire 2012 U.S. lineup, what they actually meant was that we could test almost all of the cars that will be available at one point or another, and in one form or another, for said model year. As we learned during the rather German morning “brief”ing, there was a catch. While two Volkswagen Golf Rs would be available to sample during the afternoon session, they were both European-spec models rather than the mildly reworked package we’ll be seeing in showrooms next year. Indeed, when my driving partner and I finally got our turn behind the wheel of a beautiful red five-door model, the first thing that greeted us was a detailed sheet explaining outlining which options we won’t be getting–namely the headlights, taillights, DSG and sport seats–and listing the base and up-trim configurations for the eventual U.S. release.

Volkswagen’s “Halo” performance car will feature 4Motion all-wheel drive, 256 crank horsepower (down from more than 260 overseas) and as alluded to above and in a complete reversal of their decision with the last-gen R32, a 6-Speed manual gearbox only. You read that correctly. Barring unforeseen circumstances, the DSG gearbox will not be available stateside at all. You can choose from either a three- or five-door model in one of five colors and one of two trims: loaded (self-explanatory) and more loaded. The latter throws navigation and a sunroof on top of any already robust feature list, along with a couple of other trivial features.

Inside, it’s all Golf. The only hints that anything is amiss are the R-branded steering wheel and contrast-stitched leather seats, and knowing Volkswagen owners’ propensity for raiding upper-trim parts bins to trick out their pizza delivery machines, those won’t be reliable indicators for long. Turn the key though, and the R quickly asserts itself. The engine comes to life with an authoritative burble, which settles into what I have to say is a somewhat unremarkable tone. It’s louder than the GTI, GLI and the New Beetle for sure, but it’s not terribly pleasant. It’s not unpleasant either; it’s just there. Constantly.

So how does it drive? For the sake of context, know that we drove this car back-to-back with Volkswagen’s MkVI GLI and their new New Beetle, both of which are powered by the 2.0L, 200hp, turbocharged, direct-injected “TSI” four-cylinder. While the Golf R says “TSI” under the hood too, the engine is actually based on the earlier “FSI”-branded variant of the same family. And while the modestly-rated 200hp variants found in the Golf R’s front-wheel drive cousins feel somewhat stouter than their power ratings suggest, this supposedly 265hp mill feels rather the opposite. Surely, a lot of that is down to the heft carried by the four-wheeling hatchback, and at what we expect will be a roughly 3,400lb curb weight, the R will indeed be the fat kid in the U.S. Golf family. So while there’s plenty of extra power, there’s also a good deal more work to be done.You can feel it in the steering too. Rather, they’ve made it feel that way with the steering. 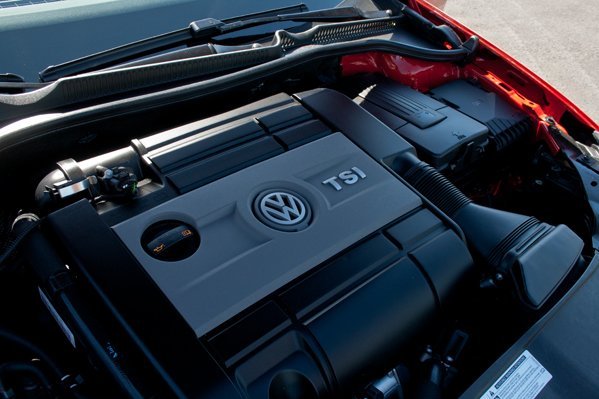 Allow me to elaborate. The R utilizes the same electro-mechanical power steering unit that VW has been using since the MkV GTI debuted. This is both a blessing and a curse. On the plus side, this supposedly yields improvements in fuel economy and refinement, but what they don’t tell you is that they’ve essentially severed the last remaining physical connection between your hands and the front wheels. The refinement advantage is obvious–if you can’t feel what the wheels are doing, then you can’t feel what they’re running over, either. And that’s all well and good in a Lexus or a Rolls-Royce, but the Golf R is neither. Appropriately then, Volkswagen spent what I can only imagine were thousands of man-hours tuning the feedback in the system, teaching the computer to recognize mechanical feedback from the wheels and transmit it back to the driver.

And generally, it works. The GTI, GLI and New Beetle are excellent examples. This R, however, leaves me puzzled. The steering is very weighty (a software determination only, mind you) but surprisingly vague when you least want imprecise feedback. Diving into some great on-camber corners on our test loop, I found the helm and the chassis to be almost out of synch. The wheel would tell me that I’d dialed in just enough steering to weight the suspension properly for a smooth transition to the exit, only to to have the rest of my senses alarm me with the realization that the R was running wide–not a desirable combination on these narrow mountain roads. This wasn’t understeer, mind you. This was, for lack of a better term, “slop” in the steering, if an electronic system can indeed be sloppy. It makes the car drive “heavier” than it really is, if you will. It’s the sort of sensation you expect to get from the helm of a 4,200lb, 6.4L Dodge Challenger, not from a compact hatchback. It was quite a surprise and to be honest, a significant disappointment.

In a straight line, the Golf R handily meets expectations. It’s about as powerful as a WRX and it feels it. The ride is a bit less distant than the Subaru’s and everything feels more substantial from top to bottom, especially the brakes, which were a bit twitchy in our tester but unflinchingly reliable. You’d need an STI (or a few trips to the Subaru performance accessory catalog at least) to get as complete of a performance package as you get with the R, but with the Subaru you’d be spending roughly the same money and walking away with quite a bit more–more power, more drive train and more ultimate capability. I say roughly the same money, because we don’t have final pricing yet, but if credible rumors are to be believed, the R should ring up at roughly the same price as the previous R32. That would put it somewhere in the mid-$30k range. I don’t need to tell you what $35k or so will buy you in the performance market these days, so draw your own conclusions.

Final judgment can be reserved until we’re invited to drive the U.S.-spec Golf R, but for the time being I’d say the Golf R has to settle for an “as-expected.” It’s the first performance-oriented Volkswagen we’ve seen in several years where the whole appears to be precisely the sum of its parts. It’s a fatter, faster Golf–no more and no less. Here’s hoping the U.S.-market engineering team can give it that little something extra before it hits our showrooms.

The author drove this vehicle at a manufacturer-sponsored event to which many members of the automotive media were invited.