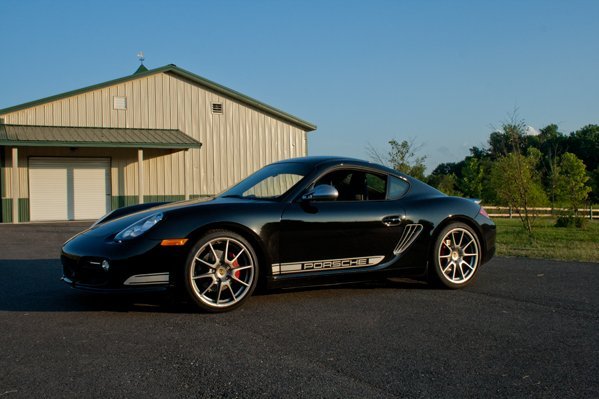 As soon as the glare of the oncoming BMW’s headlights fades, I know I am in trouble. As my eyes refocus, they fall not upon the road ahead as I expected, but instead upon a rather unfortunate collection of roadside obstacles of the rigid and wooden variety. The uncooperative asphalt has wandered off to the left somewhere, snaking over the crest of a small hill, its freshly painted white line taunting me as it disappears behind the Porsche’s hood. You know how racers and halfway decent high-performance driving instructors always ramble on about vision? As it turns out, vision is an important thing when you’re careening around a back road at 1 o’clock in the morning.

I’ve been doing these late-night drives with our Cayman R tester for a couple of reasons: First off, it has no air conditioning. But that’s OK. Never you mind that the Mid-Atlantic is experiencing one of the worst heat waves in recent decades. During our 10-day loan, the recorded daytime high in Washington, DC dropped below 100° F exactly three times. Fortunately, the Alcantara-lined seats are just as good at absorbing sweat as they are at holding the driver in place.  But right now, it’s cool. Anything is cool after driving a black car without climate control in triple-digit heat. And while there are downsides, even dangers, to evaluating a car on the street at this time of night, there are also interesting advantages. That brings us to reason number two: roads that are nearly empty during the day tend to be virtually deserted at this hour, and I can’t think of anything more inviting than a deserted back road when it comes time to drive a Porsche.

And it was going perfectly right up until now.

I react before my night vision has fully returned. My grip relaxes instantly as I readjust, looking off to the left toward the trees at the base of the hill I intend to crest. I start to dial in steering as I ever so slightly breathe off the throttle. The car dutifully begins to rotate. I don’t want to lighten the rear end too much; the only thing worse than going straight off the side the road is going sideways off the side of the road. The tires, a rubber band-thin set of Bridgestone Potenza RE050As, shuffle audibly. The pavement is still warm enough for grip, but it’s collecting condensation from the swampy Mid-Atlantic air. As the front end lines up perfectly with my only escape route, I dial in counter-steer. The Cayman is in a subtle, controlled four-wheel drift. The total lateral movement isn’t more than a few feet, but the time it takes to cover that distance feels interminable.

The tires bite in unison, the mild jolt bringing me back into real-time. With the car pointing straight at the crest of the upcoming hill, I grab just enough brake for comfort and let my body reset. The adrenaline has all of my senses working overtime and it takes a few well-regulated breaths to get my heart to slow back to a sane pace. 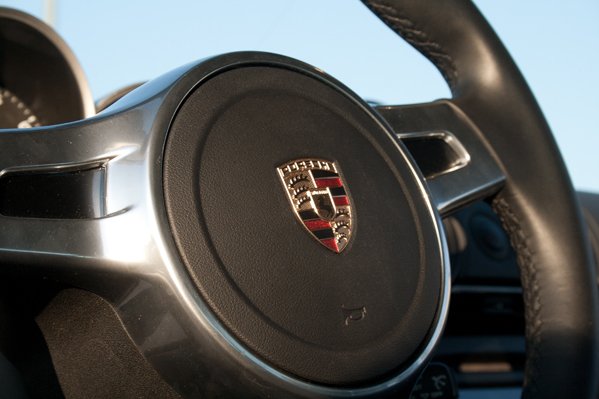 As I reach the end of this stretch of road, I hook a right onto a well-trafficked state highway that will take me back toward home. I’m done for the night. I’m obviously too tired to keep up my pace, even on these roads that I’ve driven dozens of times. A lapse like that one is inexcusable, and I’m not taking any more chances. As I head into town, the lights of a once-distant car grow ever closer in my rear-view. The road widens to four lanes as we approach the first light, and he moves into the right lane as we approach the second intersection. A red signal there has me off the throttle, but it turns just as we approach and my new neighbor jumps on the throttle and squirts ahead. It’s a 5.7L Dodge Charger, and it sounds fantastic.

The next light turns red as we approach. As we’re slowing, I notice his driver’s side window is down. I already know the answer to the question I’m about to ask, but I figure it’s as good of an icebreaker as any.

He catches on to the fact that I’m talking to him instantly. He turns and smiles a bit sheepishly, shaking his head. “Nah,” he says, “not exactly.”

“I love Hemis,” I continue. “Great engines and they make all the right noises.”

“Yeah,” he replies, chuckling a bit, “but it won’t move like that.” He nods at the Porsche and smiles.

I shrug, smiling. “It scoots,” I concede.

What happens next is no surprise. We’re both at the line and the light turns green. Two gas pedals are floored and four tires scream in protest. There, on a mostly-empty state highway in suburban Maryland, a couple of red-blooded enthusiasts do what car guys have done since the second automobile came off the proverbial assembly line. The cacophony of roasting rubber and singing exhausts rips through the sticky air. It’s over far too soon. The Porsche hits 60 and I back off, the Charger driver following suit a few car lengths behind. I wave as he passes, coasting down to make a U-turn at the next signal. To us, it’s the automotive equivalent of a hand shake and a head nod. To others, it’s a blowtorch taken to the very fabric of society.

I’ve been thinking on this particular piece for nearly a month now. Before I even handed the keys back, I was already dreaming up clever new ways to describe what hundreds of other automotive journalists have already covered in great depth. I just knew I was going to find something profound to say, some nugget of yet-undocumented wisdom that would simultaneously convey the experience of driving a machine built by Germany’s most prestigious sports car manufacturer and remind the reader that I am the one doing it.

That’s one way to drive a Porsche, just like any luxury car, really–with the tip of one’s nose ever-so-slightly inclined. 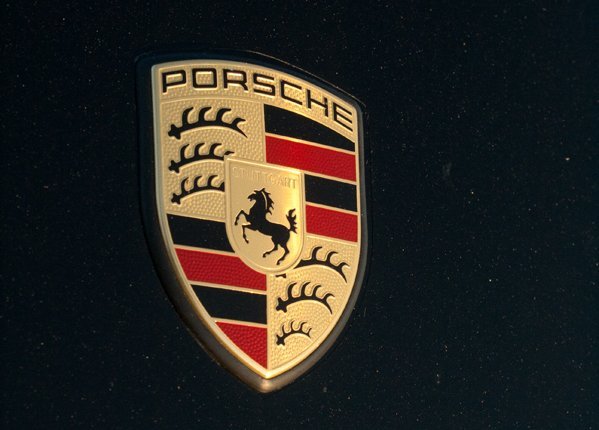 But here’s the thing: Our Cayman R tester is not a luxury car. From the outside, you’d never know it, but the mere act of ingress reveals plenty. The deeply-bolstered seats shift fore and aft only; there’s no recline adjustment and the distance from the side bolster to the roof could only be generously measured in inches. Cast dignity aside, all ye who enter here. And if your date is wearing a dress, be kind and consider parking with the passenger side opposite any potential crowds (Sorry, Karen). And after you’re done working up a sweat just getting seated, you had better be comfortable with the windows down.

Luxury purchase? Absolutely. Luxury car? Not at all.

And it fits, because the Cayman R is not meant to be driven like a luxury car. It’s meant to be driven like a Porsche–a classic Porsche. A doctor-killing, end-swapping, nouveau riche-emasculating, widowmaking Porsche. You grab the Cayman R by the scruff and you hurtle it at the next obstacle. You push it until the mid-engine chassis starts to protest and then you push it a little more. The word “telepathic” gets thrown around to describe the chassis tuning of a lot of sports cars, but this is the closest I’ve ever been to experiencing that cliché. And then there’s the engine. Oh my, the engine. 3.4 liters of Porsche flat six push out 330hp and 273lb-ft of torque. And this isn’t some stereotypical German torque monster. Oh no, this motor must be revved. Sure, you can lope around town at 2,000 RPM if you insist, but if you do, you’ll be completely missing the point (not to mention the power band). This is a sports car engine, not some touring sedan’s boat anchor. You need to rev it. You need to wring the ever-living crap out of it, shift it, and then do it again.

It doesn’t end there. The steering is ridiculously good. It’s not artificially heavy or light. It’s just there. You don’t think about it; you don’t overcook a corner and then curse under your breath because the car didn’t tell you what was going on. The gearbox is the same. Coming from something like a 370Z, it feels very light. How can something so comparatively insubstantial get the job done? As it turns out, very well. All of these things combine into an almost frenetic driving experience. If it weren’t so capable, it would be downright frightening.

But can you drive it to the country club? Well, I suppose, if the Cayenne is in for maintenance, but the Cayman R doesn’t belong in a valet service garage or in front of a fancy hotel. It belongs in a race paddock or an auto-cross grid. Forget for a moment the flashy throw-back “Porsche” decals and the curvaceous body. The Cayman R is not a car to been seen in. It’s a car to make a scene in. 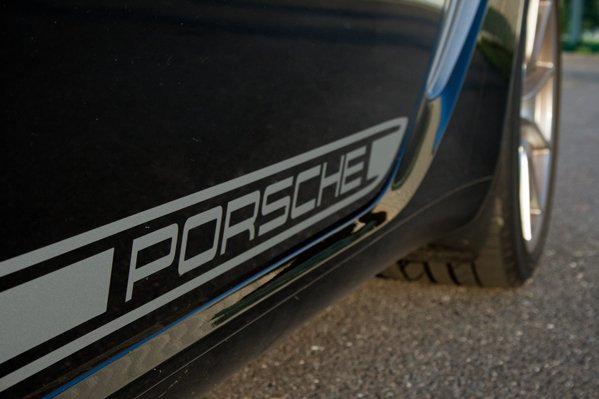 That’s not to say that the Cayman R is punishing–far from it. On anything short of the worst of the District’s streets (bear in mind that if NASA wanted to fake a second moon landing, they could easily use the Southeast-Southwest Freeway for location shooting), the ride is livable. In fact, if it weren’t for the AC delete option box being checked on our tester’s build sheet, it could pass for a reasonable daily driver. The visibility is surprisingly excellent, even if you’re of the sort who still relies on shoulder-checking, and while the seats are definitely on the aggressive end of the spectrum, they’re comfortable over long distances even for those who are, like myself, somewhat healthy of build. If you’re anywhere north of a 36″ waist, however, it may be on the snug side.

Forget all of that for the moment. If you start thinking of the Cayman R as a one-size-fits-all enthusiast machine, you’ll be tempted to start comparing it to other cars that define that role. You don’t want to do that. Compared to all of them, Porsche will come up short on paper every time. It’s more expensive, less practical, harder to work on and less convenient to have serviced. If you want the accountant’s choice, then by all means, you can find yourself a better value. Just remember, before you can have a giant killer, you must first have giants. Who is David if there is no Goliath?

Don’t get me wrong. This isn’t intended to be a love letter to Porsche. Like any manufacturer they have their share of faults, some perceived and some real. Just ask their most vocal critics: Porsche owners. All the same, the Cayman R may be the closest I’ve come to driving a perfect execution of the sports car concept.

Many thanks to Porsche for providing the Cayman R for the purpose of this review.