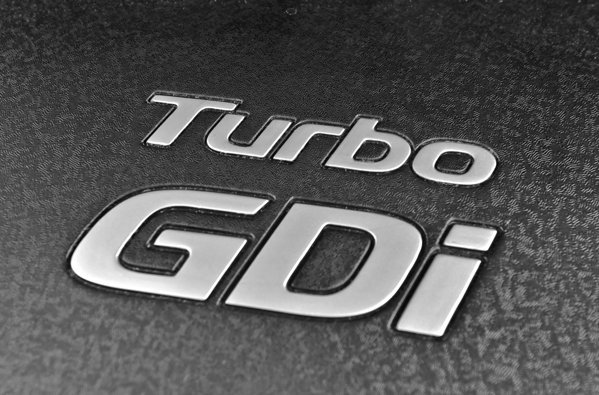 “… for those of us who lived through these events, the only marker we’ll ever need is the tick of a clock at the 46th minute of the eighth hour of the 11th day.” -President George W. Bush
December, 2001

It’s 1:30 a.m. on Friday, but if you ask my body, it’s still very much Thursday night. I’m cruising southward on a deserted stretch of I-287 in north Jersey. It’s cool and clear, the full moon turning the sparse high clouds a ghostly shade of silver around the edges. I have the music up and the sunroof rolled back, inviting the breeze in to keep me awake, but I don’t really need it. I’ve been on the road for about six hours but I’m still as fresh as if were six minutes. As I gaze out above the trees that line the interstate to take in the beauty of the silver wisps in the stratosphere, I notice something about the coloring of the cloud layer to my east. The misty whites and grays give way to an equally bright, yellow-tinged hue in the center. That isn’t the moon.

I can’t see the source of the illumination. It’s far to the east, hidden behind forested ridges and the curvature of the earth itself, but the realization hits me instantly. There’s only one nocturnal force that could rival the brilliance of that midnight moon.

The metropolis remains hidden from view for the entirety of my journey, but the certainty of my realization is almost as moving as a glance at the skyline itself would be. I’ll pass through Philadelphia, Wilmington and Baltimore as I retrace my earlier path, but not New York. This is as close as I’ll get to a glimpse at the Big Apple for a while yet, but in many ways the impact is equal. It’s as if the city itself knows I had planned my route to skirt around it, to stay inland a good thirty miles and avoid the whole mess. I know you’re out there, it’s saying.

And out here I’ll stay.

Out here, I’m in a Kia Sportage SX turbo. I’m somewhere near hour seven of and eleven-hour trip from Annapolis, Maryland to West Nyack, New York and back. West Nyack, of course, being just west of Nyack and northwest of South Nyack. Equally ambiguously, it’s in New York’s beautiful Hudson Valley.  If you drew a line straight north, anchored at the southern tip of Manhattan and ending just over the border from Jersey on I-87, that’s where you’d find it. So far as I can tell, it consists of approximately six traffic lights and a typical suburban shopping mall. Other than that, or perhaps despite it, it’s entirely unremarkable. If it weren’t for a set of tires I’d arranged to purchase for my personal car (A 2008 Mazdaspeed3), I’d probably have never known it even existed. Instead, I’m on my way home from this cardinally-endowed village, the four Bridgestone RE-01Rs in the Kia’s hatch giving off that fresh rubber smell–the smell of grip. I could have driven the Mazda up here, but the Sportage doesn’t have to be turned back in until later in the day, and a compact SUV makes for a better road trip car than a turbocharged hatchback. 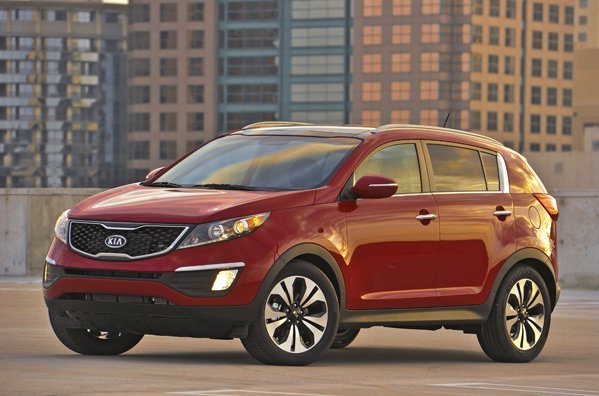 This seems an appropriate time to get some of the boring stuff out of the way. Like the Optima I drove two weeks prior, this Sportage is powered by the new Hyundai/Kia 2.0-liter, GDI-T (for Turbocharged) 4-cylinder. In the Sportage, you get 260 horses and 269lb-ft of torque; in the Optima, there’s an extra 14hp on tap. You’d think that the lighter, punchier sedan would feel a good bit quicker, but alas, the lethargic 2.885:1 final drive ratio in the Optima’s transmission results in a somewhat uneventful acceleration experience. Fortunately though, both engines pull strong all the way past their 6,000 RPM power peaks, but if you’re used to the way a typical turbocharged sport compact kicks hard off the line, you’ll be disappointed by the Optima’s initial punch.

And don’t think for a second that Hyundai and Kia are underrating their engines. Five minutes in the Sportage with its more aggressive gearing will debunk that theory. Even our FWD tester is pretty gnarly off the line. Some outlets have found 60 mph in about six seconds flat with all-wheel drive models, and I have no trouble believing that. Both cars pull convincingly from a roll, possessing enough juice under the hood to give you the advantage in a quick highway pass despite the tall gears. And for its part, the Sportage also manages to deliver on its fuel economy ratings. Over the course of my road trip, I would manage a 30-mpg average according to the on-board computer. Even figuring in the typical optimism of MFD estimates, that’s pretty healthy for a 3500lb crossover. The Optima didn’t fare as well relative to its EPA numbers around town, but in its defense I never had the chance to put a good chunk of uninterrupted highway mileage on it, so it may have more to give.

In the suspension department, both have a crisp, rather comfortable ride. There’s still a little bit of unwanted oscillation over rippled pavement, and if you live in an area prone to odd surface imperfections resulting from frost heave or other heat cycling, you might notice. All in all, the ride comfort is pretty impressive in both vehicles given the size of their wheels (18″s in both cases) and their somewhat sporting intentions. Unfortunately, the disconnected steering of the EX models remains here. It’s disappointing in the Optima, which would otherwise make a convincing Mazda6 competitor in the FWD segment, but it suits the size and mission of the Sportage well enough that it’s easier to forgive in that application. Even compact SUVs aren’t going to compete with sporty sedans for driving dynamics, so it seems silly to complain about such things. For this justification to work, it helps to conveniently forget that the Mazda CX-7 exists, which I am content to do for the sake of my own argument. 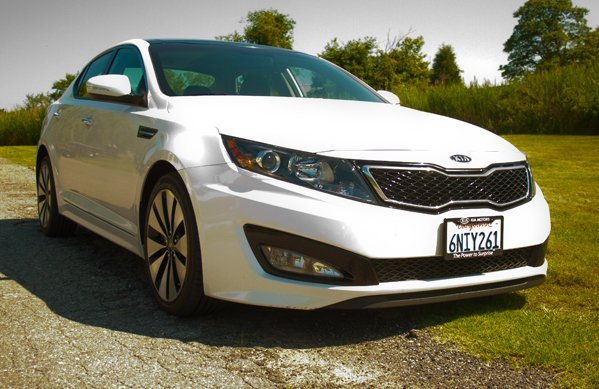 On the inside, both are exactly what you’d expect if you’re familiar with the non-turbo models. Of note, I’m happy to report that the heated steering wheel, the bane of my existence during my non-turbo Optima evaluation, is gone. Don’t get me wrong here; a heated wheel is one of my favorite comfort features, but the execution in this case was beyond flawed. The wheel wouldn’t maintain anything resembling a consistent temperature, and the control for it was hidden on the steering column itself, where you couldn’t see the indicator light. It was a great example of a feature that was too frustrating to use, and I’m glad it’s gone. Happily, the Optima’s interior appears otherwise unchanged, and it’s for the best. The material quality won’t rival that of any luxury brands, but it’s a excellent example of honest construction. It looks good, feels good, and works right. And more importantly, there’s nothing that jumps out at you as something that will fail expensively or inconveniently right after warranty. The Sportage isn’t quite as impressive inside, and again everything is carried over, but it’s not quite as attractive as the Optima. Cheaper treatments and finishes reveal the unimpressive material quality, and while the Optima’s trim may not be any more robust, it just pulls it off more convincingly.

So, again I find myself reflecting on the progress of Korea’s automotive juggernauts. It’s fitting I suppose that I find myself here, within a stone’s throw of New York City, and  looking back at the last decade. A lot has happened in the past ten years. In 2001, I was a senior in high school, driving my parents’ Jeep Wrangler, and amassing stacks upon stacks of car magazines. I thought I wanted to be a computer programmer, figuring it would be a good path toward purchasing some of the cars I read about from week to week. By that metric alone, I’ve surpassed my own expectations. A 720 SAT score for English was the only hint at where my career was headed. As usual, it makes perfect sense in hindsight. Like then, I am still fortunate, and if you’re reading this, I have you to thank in part.

Like myself, the Koreans have come quite a long way in the last decade. I won’t rehash what has been covered ad nauseum the last couple of years, especially since I’ve already said my piece. Suffice it to say that Hyundai and Kia made the right moves at the right time with the right product. Along with Ford, they’re demonstrating that there’s nothing better in business than being both smart and lucky.

That’s not to say that the Koreans have both in equal parts. While their quality has come a long way, there’s no denying that they happened to be in the right place at the right time. Between a resurgent U.S. auto market, declining competitiveness from two of Japan’s big three, and the government’s investment in Detroit, Hyundai and Kia couldn’t have possibly asked for a better climate in which to undergo a product renaissance.

And while glancing eastward in the night sky at just the right moment was purely serendipitous, I was ultimately in the position to do so because of events I set in motion years ago. Here, almost four hours from home, the ghostly glow gently illuminating the road ahead of me, I smile, because I know I’ve been lucky.

Kia provided the Sportage and the Optima for the purpose of this review. Stock photography of the Kia Sportage SX provided by Kia’s product team. Kia Optima SX photography by Nicole Gagnon.