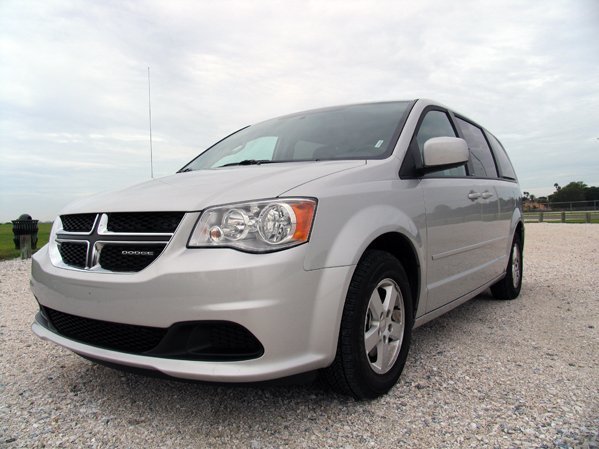 “I see we’ve got you booked for a minivan today- how many people will there be in your party?.” As I thought about explaining to the attendant at the Alamo desk that I’d be the only one using the van, and that I’d basically be living out of it for the next 24 hours, better judgment prevailed: ?Four. Thanks.?

This whole crackpot scheme of assessing the livability of a rented minivan was born while perusing a travel site a few days earlier. A small ad offered a $45 a day minivan rental deal to usher in the end of summer in my tourist-centric city. Given the planet’s current economic woes, the thought of living in one’s car has probably crossed a few too many minds lately, especially those staring down the barrel of unemployment. After all, as wise car enthusiast code dictates, you can’t drive a house. A quick crunch of the numbers revealed that, for a month, this rented van would run $1,350- a figure not out of line with the typical rent for a nice place in most US cities. Unlike with an apartment, your Alamo landlord will also throw in electricity gratis, courtesy of your van-abode’s 12-volt charging system and multiple power outlets- what a perk! Water and sewer, well, that’s up to you. We suggest looking outside the van for those facilities, you might like to take it to some of the best caravan holiday parks for a relaxing getaway! 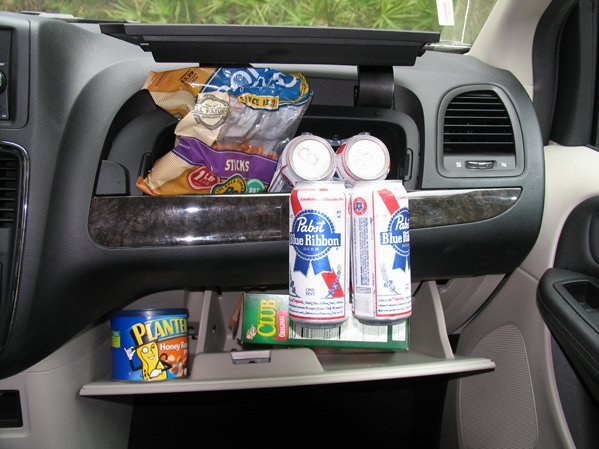 With a 10% coupon available online applied to our daily rate, the weekly charge for our 2011 Dodge studio-apartment-on-wheels runs close to the average unemployment insurance payment of $295/week last year. Throw in a panhandling bonus for gas, food and Pabst Blue Ribbon tall boys, and the essentials are more or less covered. So how does a modern minivan fare as a house? We at S:S:L were determined to find out.

One of the bonuses of Alamo/National’s renting system is that you’re free to choose whichever model strikes your fancy (within your reserved size class) on the lot when you arrive. For us that meant either a 2010 Dodge Grand Caravan or a 2011 Dodge Grand Caravan. Newer obviously equals better, especially in this case, as the Caravan’s 2011 refresh saw the installation of Chrysler’s 3.6L Pentastar V6 paired to a 6-speed automatic as the standard powertrain. With 283 horsepower, highest among current minivan offerings, the choice was basically made for us. The acrid smell greeting us upon entry of our tester almost resulted in a last minute play change- turns out the previous renter saw fit to leave a rotting bottle of formula, a spilled full box of cheerios and a bottle of Motrin in the middle-row storage binnacle. Although all staples of parenthood, and a potential meal-on-the-go for cash-strapped van residents, the purely temporary nature of our poverty ensured all of this stuff was jettisoned at the first pit stop. 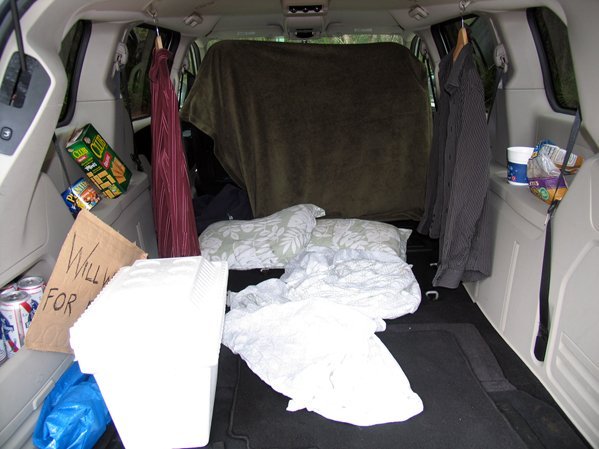 As transportation, the Grand Caravan fares pretty well. That V6 rips through the rev range, at least in sound if not forward progress. In fairness, it’s got more than two tons of chrome, ‘soft-touch’ plastics and folding seats to haul around, so its stately pace can be somewhat forgiven. What can’t be overlooked, though, is the symphony of creaks, groans and rattles this example with a mere 13,000 miles had already accumulated. The sheer space inside this rolling echo chamber only amplifies the cacophony. This doesn’t bode especially well for the new fleet of Chryslers, especially given how much touting of improved build quality the company has done in recent years. Luckily, the standard sound system is loud enough to drown much of it out, perhaps engineered to help silence the screaming infants that typically occupy rearward rows.

It is also possible to convert your Grand Caravan into a perfect camper van. But be informed that when you make modifications to your minivan, you may need to update your insurer about the changes so that you do not run into complications later. So contact a reputed broker to know how to insure your camper van
after the modifications have been made.

As a residence, however, the Grand Caravan excels. The Stow-N-Go system gives you the ability to fold the second- and third-row seats flat into the floor, and the spaces they occupy become valuable storage bins when the seats are in use. Think of each one as a built-in drawer, together encompassing a full wardrobe. Coat hooks abound, perfect for keeping those interview shirts wrinkle-free. 14 separate storage cubbies are placed scatter shot throughout the cabin, great for organizing dry goods like Top Ramen packages and unemployment checks. Another 14 cup holders wait ready for Steel Reserve and Schlitz cans. The rear privacy glass keeps out prying hobo eyes, and the low load floor makes for cavernous quarters. Comfortably sleeping two (three in a pinch), the 45 square feet under roof feature door-to-door carpeting at a price lower than a similarly sized Manhattan studio. Cats and small dogs are welcome, although you may want to situate Fido’s quarters in the front passenger foot well for sanity’s sake. 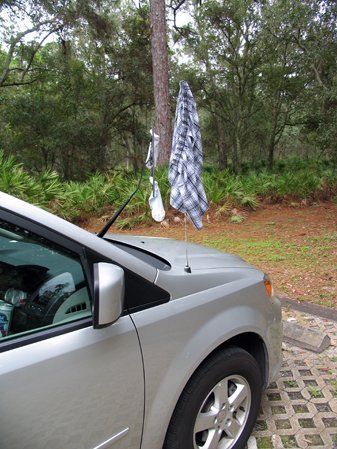 Obviously, living in a van (down by the river) entails certain compromises. The lack of running water, for one. Operating any of the accessories draws electrical power that will eventually necessitate a fill-up to recharge, costly by any standards in a vehicle with a 20 gallon tank which got just 17 mpg in our hands. You’ll also need to be very selective when it comes to choosing what possessions you want to bring aboard. Microwave or space heater? Shoes or belts? Significant other or air conditioner?

The more well-heeled among this nation’s unemployed might be able to spend their evenings in a Red Roof Inn or Candlewood Suites. But when they wake up in the morning to head off to that interview, they’ll need to either hail a cab or thumb it to get there. Our Grand Caravan resident can simply wake up, find the nearest public park facilities and arrive in style in a new, shiny vehicle that screams middle-class prosperity. Better yet, you’ll look like a family man. And who wouldn’t give a family man a job? 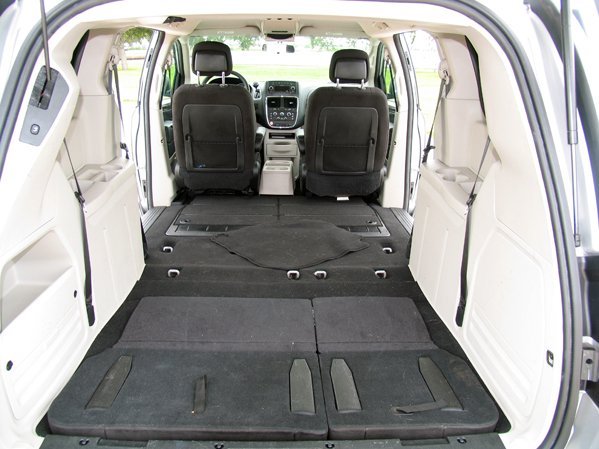