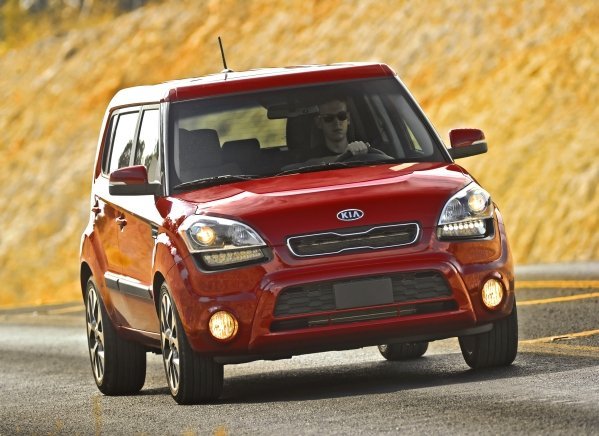 Mother nature can be one fickle witch. For evidence, look no further than the scorched Texas hill country landscape we’re driving through at the moment. The worst drought on record has sapped water from lakebeds, turning Austin’s sprawling Lake Travis into little more than a kiddie pool. So far this year, Austin has experienced more than ninety days of 100 degree heat, keeping both the city’s native Mexican free-tailed bat population (and fixed-gear-riding hipster population) in the shade for most of the day. The lack of green vegetation has also driven hordes of Odocoileus texanus, aka Texas White tail deer, to the roadside in search of the only suitable grub for miles. This last factoid is of particular interest to us at the moment, because my co-driver and I happen to be hurtling past the same roadsides these deer find so enticing at 60 mph. I have always been intrigued by deer. Whereas some people see them as a pest, others believe that they should be protected. You can learn more about some of the different species of deer here: https://feedthatgame.com. On the route we decided to take, deer carcasses appear frequently enough to serve as mile-markers, and the live ones are nearly as plentiful. At this moment, the only feature of our 2012 Kia Soul+ that is of any worth to me is its widescreen windshield.

This isn’t to say the new Soul has no more to offer. The 2012 MY updates amount to far more than a bumper-and-light refresh. Both engines and transmissions are new, offering more horsepower and better fuel economy than their predecessors. The interior has revised materials and content, better sound insulation, and more powerful stereos. It’s just that, at the moment, all of this matters not one iota if we can’t keep a deer from smearing itself across the nose of our test car. The soundest idea at this point is to relax and accept that if a whitetail decides to part ways with the Earth in our immediate path, the Soul will do its best to keep us safe. 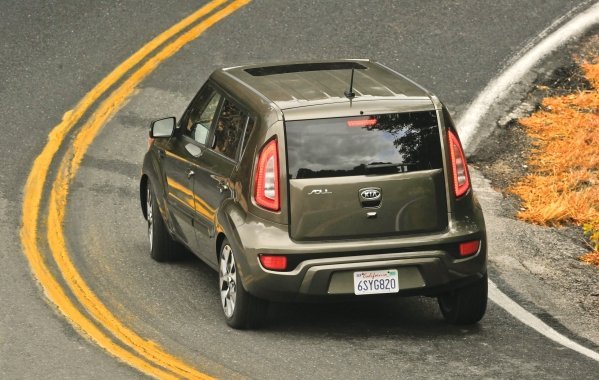 Best to delve into what makes the Soul a compelling steer, rather than simply a deer protection cage. Horsepower in both of the two available powerplants is up; the base 1.6L GDI rises to 138hp and 123lb-ft, up 16 and 8 respectively, and gains direct injection for EPA mileage estimates of 27 mpg city (versus 26 mpg previously) and 35 highway (playing 31 before). The Eco package, available only on Soul automatics and contributing low rolling resistance tires and ‘Idle Stop & Go’ start/stop assistance, brings the mileage estimates to 29 city and 36 highway, impressive for a boxy wedge as roomy as the Soul. Of more interest to enthusiasts will be the 2.0L Nu powerplant, with 164hp and 148lb-ft, improvements of 22hp and 11lb-ft over its predecessor. Mileage estimates for the 2.0L drop only slightly from the 1.6L, to 26 city and 34 highway, improvements of 2 mpg and 4 mpg over the 2011 model. 2-liters with the Eco package bring an extra 2 mpg city and highway. Both engines can be had with a 6-speed manual or a 6-speed automatic, although the top Soul ! (exclaim) model can only be ordered with an auto. Those wanting to row their own will need to stick to the base Soul (1.6L) or Soul + (2.0L) trims. 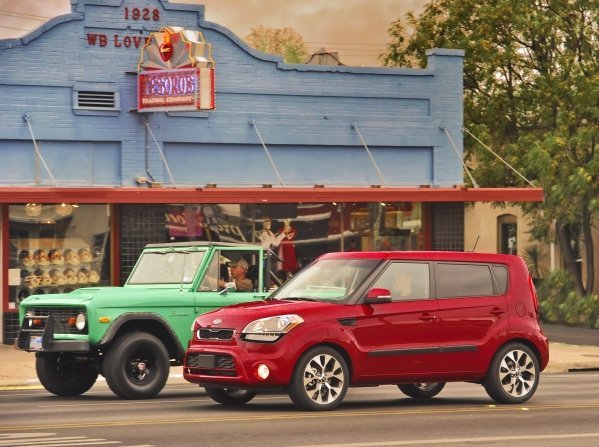 Content at any level is typical Korean- exceedingly generous. Even stripper models get A/C, power windows and locks, and a tilting-and-telescoping steering wheel for the $14,650 price of entry. Ponying up to the Soul + at $17,050 adds the 2.0L Nu, Bluetooth, keyless entry and 16″ alloys. Bring $20,350 for a Soul ! and you’ll get the 6-speed auto, projector headlights with de rigeur LED running lights, 18-inch alloys and Kia’s new UVO (aka Microsoft) infotainment system, which delivers Ford Sync-like capabilities on paper but bests it for usability and intuitiveness. You’ll also get a backup camera and a 350-watt Infinity stereo for your trouble. Fit and finish is strong, with tight panelgaps and materials that are pleasing to the touch, as long as you don’t reach too far up the dash. Wind noise is hushed and the drone of the base four-cylinder is at least muted. Better to step up to the rorty 2.0L and the accompanied zing up to redline; it’s the choice any red-blooded driver will make. 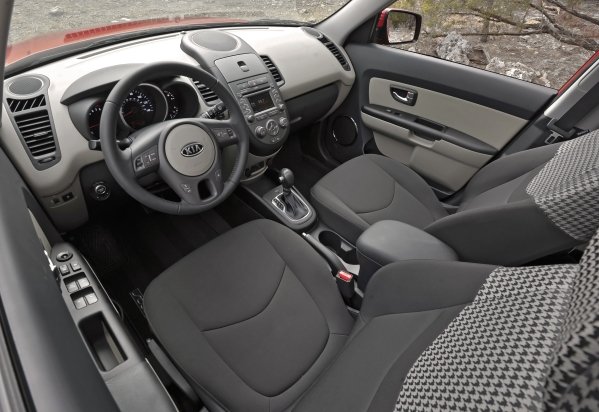 Consumer response for the Soul has been extremely positive since the model was introduced two years ago, and given its extroverted looks the interest has come from seemingly unlikely places. Aging baby boomers and pensioners have snapped up the Soul in droves thanks to its low price of entry and tall seating position. It enables the less limber to get in and out with ease, with better fuel economy and a lower price of entry than a full-blown compact crossover. To combat the soul-sucking (no pun intended) retiree stigma, Kia has advertised and marketed hard to cultivate a youthful-enough image to appeal to first time car buyers, the type that might emulate those pop-locking hamsters without actually trying. For them, the Soul can offer a lot. It’s affordable, economical, loaded with gadgets and funkily styled. But at its core, the Soul is still quiet, smooth-riding and softly suspended. It rolls gently on the long sweepers of Texas hill country, never raising a fuss when the driver turns the wick up or exhibiting any untoward behavior, but neither does it encourage it. The six-speed manual has well-spaced ratios, but the shifter’s feel and throw are geared toward a buyer choosing the stick-shift for cost savings, not driving nirvana. And as history has taught us, cars with ‘funky’ styling (see: PT Cruiser, New Beetle) usually tend to appeal mostly to the age set that actually uses the word ‘funky’; in other words, those over the hill.

Better, then, for young buyers to turn their attention to a car that’s fun without suggesting you’re trying too hard; cuz y’know, like, trying too hard is way lame. Enter the 2012 Rio 5 door. Born from a similar mold as the Soul, the 5 door features a cheeky face and tight proportions. In person, the design works well. It looks small but upscale, and the 17 inch jewel-cut alloys of the range-topping SX model, together with projector headlights and LED accent lights, do much to raise the image closer to that of a ¾ scale Audi A3. The base LX and mid-level EX models lack the flash of the SX but still benefit from its cohesive design, including the rising beltline and ovoid backlight. 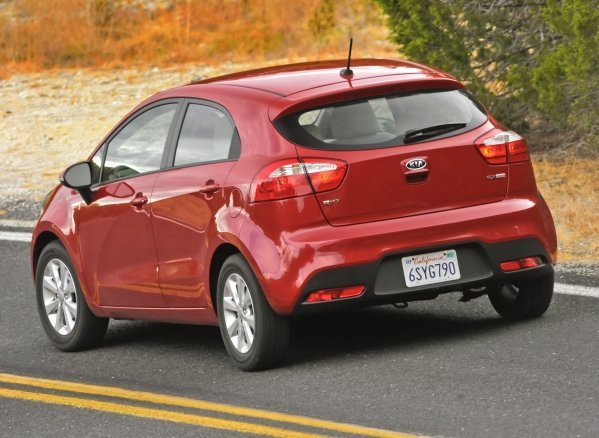 Under the skin, you’ll find the same 1.6L GDI engine powering the base model Soul. Here again, it produces 138hp and 123lb-ft, although with about 200 fewer pounds to motivate (2410 lbs for the lightest Rio, 2615 for the Soul), forward progress is more urgent. The slighter Rio also benefits at the pump, traveling 30 miles for every gallon in the city and 40 on the highway. My hypermiling co-driver managed 53 mpg on our 45-mile route, using driving methods that no performance enthusiast would ever endorse. A more representative drive afterward with mixed city crawling and highway traffic yielded an easy 31.5 mpg, so Kia’s economy claims seem well-justified. 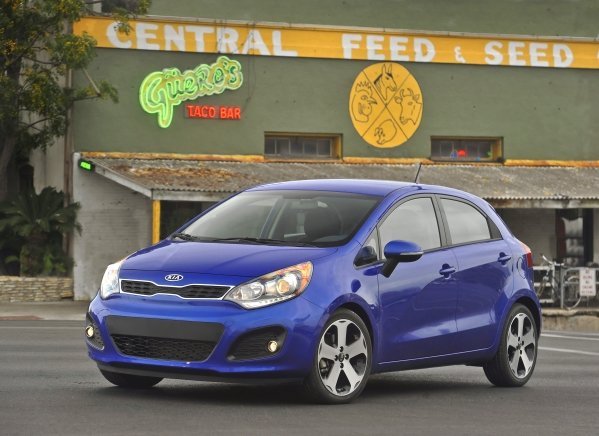 The interior benefits from an ergonomically pleasing design, including ‘toggle’ switches for the HVAC controls that are better executed than Mini’s own interpretation. Instrumentation is clear, and two generously proportioned adults up front won’t feel cramped. The backseat is adequte by B-segment standards, as is the hatch, although all comers pale in comparison to the cavernous Fit; the Rio’s 50 cubic foot storage capacity is 7 shy of the Honda. Thoughtful touches include a smartphone-shaped recess in the front storage bin beneath two auxiliary inputs, front door bottle holders and a cavernous glovebox. Upper trim levels receive soft-touch dash treatments, illuminated vanity mirrors, a sliding center armrest and padded door armrests. Kia is campaigning to make infotainment its ace in the hole at this pricepoint, so to that effect the Microsoft-powered UVO system is again made available, coupled with a 4.3-inch touchscreen and backup camera. It all works well, providing the driver with a bright and comfortable place to pass time, storage aplenty and generous content. 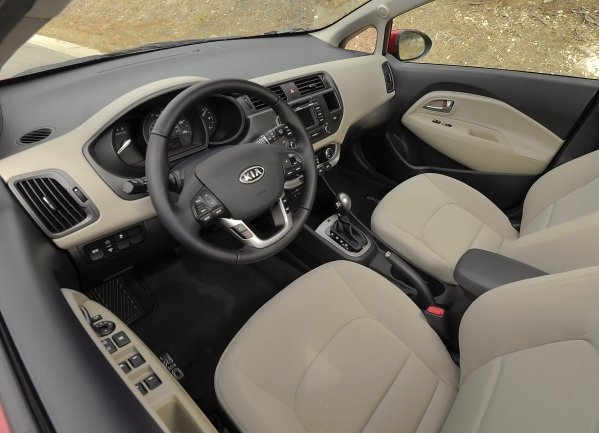 The Rio’s on-road demeanor recalls an earlier Civic, before Honda began building Corollas with Civic badges; quiet competence that neither beats you over the head with its brilliance nor puts you to sleep when you actually want to enjoy the drive. Steering is typical electric-assisted: light and short on feel, but the speed is well-judged and the brakes are easily modulated. Body roll is kept well in check thanks to a lower center of gravity than the Soul, and the ride is firm but still comfortable. The Rio is most in the zone when its driver is pushing at around 7/10ths- here, the 6-speed automatic will downshift readily and the chassis soaks up what the road dishes out. The Rio isn’t meant to be a backroad burner, and it isn’t, but it offers at least a tinge of enthusiasm for the driver’s imagined heroics. Push further, and you’ll be left wondering why you did. This car’s place is in the city and suburbs, and in those settings it excels. 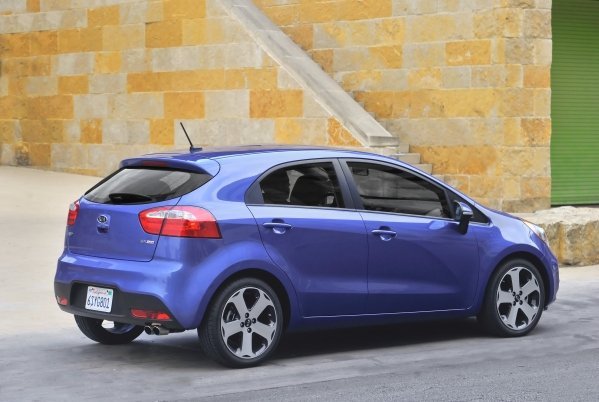 Pricing opens lower than the previous Rio, at $14,350 for an LX manual including destination. The EX, which adds the 6-speed automatic transmission, power accessories, Bluetooth and a telescoping steering wheel among others, runs $17,250 and can be fitted with a $1,000 Convenience package that bundles together 15″ alloys, UVO, a leather-wrapped wheel and shifter, and power-folding outside mirrors. Start/stop technology will also be available on the EX in a $400 ‘Eco’ package. The $18,450 SX model adds sport suspension, metal pedals and accent trim, the aforementioned 17″ alloys, and all the other goodies that come in the Convenience package.

The new Rio 5-door represents a real step up from its predecessor, and a well-rounded addition to the market. It can shake the penalty box stigma associated with many B-segment offerings thanks to its content levels, refinement and most of all, styling. Together with the Soul, Kia now has two competent small cars that can stand on their own without the crutches of bargain-basement pricing and lifetime warranties.