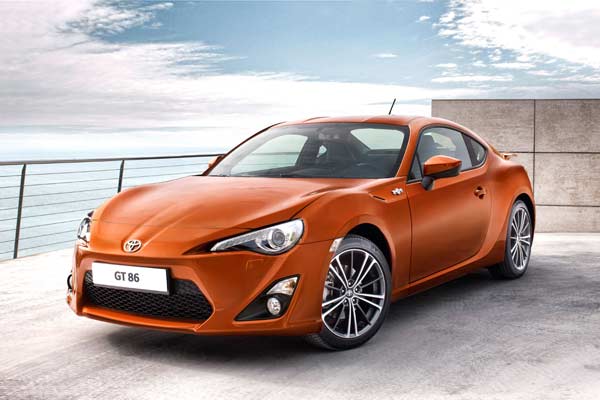 Toyota has released the official production specs and photos of the new GT 86 sports car ahead of its debut at the Tokyo Motor Show next week.  The GT 86 marks the return for Toyota to its sports car roots with a front-engine, rear-wheel drive layout.  Read on for a full gallery and a list of specs for the eagerly anticipated Toyota sports car.

The GT 86 has been a hot topic amongst enthusiasts for a couple of years now, and the production model specs promise to live up to the hype.   Toyota says it has conceived the GT 86 to be an entirely driver-focused vehicle, and to deliver all the core elements of a sports car.

The 2+2 GT 86 coupe is built on a completely new platform with emphasis on aerodynamics, weight savings, and an optimal power-to-weight ratio.  Toyota has set the GT 86’s high-revving 197-horsepower 2.0-liter flat-four boxer engine and six-speed manual transmission as rearward as possible to help keep the car balanced.  The result is a 53:47 front-to-rear weight distribution, with a center of gravity at 475mm.

In the driving dynamics department, Toyota has given the GT 86 MacPhearson struts in the front and double wishbones in the rear.  The car rides on 17-inch wheels fitted over disc brakes all around.  Power is delivered to the rear wheels via a limited-slip differential.

The GT 86 will go on sale in Europe in June of 2012 and we’d wager that it will go on sale in North America in roughly the same timeframe.  The car certainly looks exciting on paper and we can’t wait to put one on the track and see how it compares to cars like Mazda MX-5 and Hyundai Genesis Coupe.