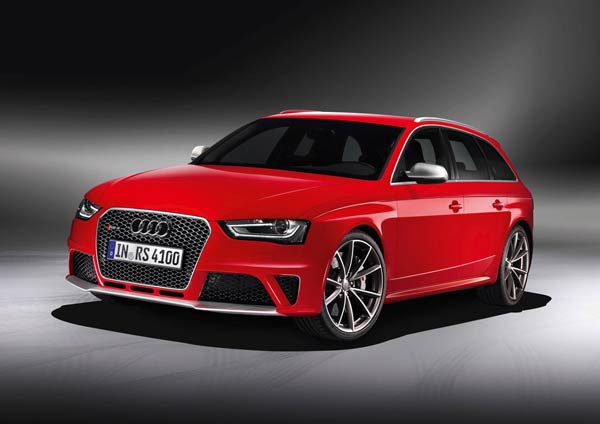 Here it is, the new Audi RS4 which makes its official début at the 2012 Geneva Auto Show in March.  This is the third generation RS4, and like the first generation RS4, is only available in Avant form factor.  The new RS4 uses the same high-revving 4.2-liter V8 engine that powers the RS5 Coupe and produces 450-horsepower and 317 lb-ft of torque.  Audi claims that the RS4 Avant can get from zero to 100 km/h in 4.7 seconds and has an electronically limited top speed of 155mph.  There isn’t much to report by way of new tech that isn’t already found in the updated RS5, but the updated front fascia of the RS4 shows the design direction of RS cars for the near future.  Also new are the 19-inch, ten-spoke forged aluminum wheels which ride on 265/30 rubber.

Now, it’s time for my two cents on the new RS4 as a current generation S4 owner.  This car could have been and should have been equipped with the new 4.0-liter twin-turbo engine or a higher output 3.0T engine.  The 4.2 engine has never been a gem in anything but the R8 and with the exception of the sound, doesn’t offer anything compelling to the driving experience.  You can say this is conjecture since we haven’t driven the new RS4, but this is basically the same engine used in Audi’s lineup for the last several years and has had less than stellar results in most comparison tests of the RS5 vs. the world.   Yes, much of that is attributed to the RS5’s steering feel, but the performance numbers also were lackluster when compared to the competition.  While the steering is probably fixed with the new RS4, the car really deserves a forced induction engine to go with the wonderful B8 chassis.  On the bright side, the new RS4 looks fantastic and probably sounds fantastic.  We won’t be seeing this in North America in Avant form but hopefully this paves the way to a sedan version in the next couple of years.

Click through for a full 2013 Audi RS4 Avant photo gallery