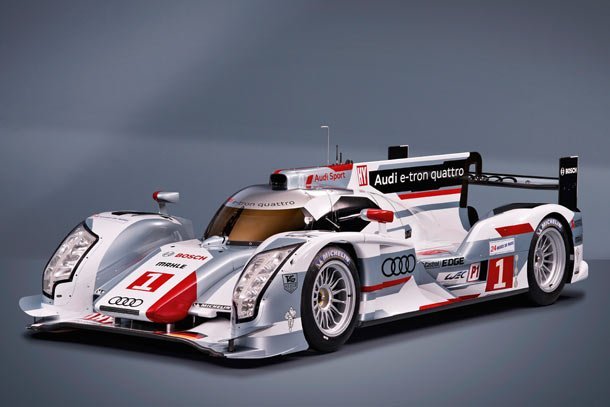 The wait is over to catch a glimpse of Audi’s new LMP1 Le Mans Prototype named the R18 e-tron quattro.  At an event in Munich, Audi unveiled the new racer which will make its debut on May 5th in the 6-hour World Endurance Championship (WEC) race at Spa-Francorchamps and onward to the 24 Hours of Le Mans on June 16/17.  With this new racer, Audi has united two technologies they are testing for use on production cars: e-tron and quattro.

To recieve the quattro designation reserved for Audi’s all-wheel drive cars, the R18 e-tron recovers kinetic energy on the front axle under braking and is fed as electricity into a flywheel accumulator which is then put down to the front wheels under acceleration when the R18 e-tron is at speeds greater than 120 km/h.  The 510-hp V6 diesel TDI engine outputs power to the rear wheels.  Audi calls this new system e-tron quattro.

Despite the addition of an electrical drive system in the R18 e-tron quattro, the car is the lightest prototype that Audi Sport has ever produced.  Throughout development, Audi focused on lightweight and design, including a new gearbox with a carbon-fiber composite housing – an endurance racing first.  Head of Audi Motorsport, Dr. Wolfgang Ulrich, commented “Our drivers’ impressions were very positive from the first moment. Without the weight optimized R18 ultra we would have not been capable of realizing the R18 e-tron quattro which is absolutely identical with the exception of the hybrid system.”

Development of the R18 e-tron quattro began in February 2010, with only 18 months between the first concepts and the first test.  This is a staggeringly quick development cycle as this technology has never been used in motorsport or production.  To speed development, the R18 e-tron quattro is identical to the 2012 Audi R18 ultra with the exception of the hybrid drive system.  This helps streamline logistics and support for Audi Sport and the respective teams.

Though Audi will campaign three of last year’s R18 TDIs at this year’s WEC opener at Sebring, Audi will field two R18 e-tron quattro prototypes and two R18 ultra prototypes at the 2012 24 Hours of Le Mans.  The first hybrid prototype will be driven by the 2011 Le Mans winning team of Marcel Fässler (CH), André Lotterer (D) and Benoît Tréluyer (F) while the second will be piloted by the successful team of Dindo Capello (I), Tom Kristensen (DK) and Allan McNish (GB).  The first Audi R18 ultra will be the trio of Loïc Duval (F), Timo Bernhard (D) and Romain Dumas (F) with the remaining Audi R18 ultra driven by Marco Bonanomi (I), Oliver Jarvis (GB) and Mike Rockenfeller (D).

After the 24 Hours of Le Mans, Audi Sport will enter one R18 e-tron quattro and an R18 ultra for the remainder of the FIA WEC season.