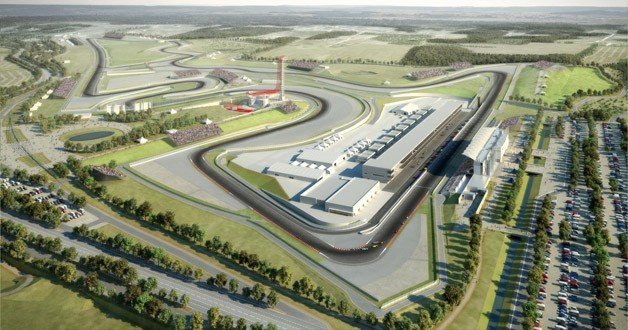 The American Le Mans Series confirmed today that they will be running at Austin’s new Circuit of the Americas in 2013.  Dates have not been announced yet, however we expect the full schedule to be released just before Petit Le Mans in October.   Read the full ALMS press release after the jump.

BRASELTON, Ga. (June 1, 2012) – The American Le Mans Series presented by Tequila Patrón (ALMS) announced today that its 2013 season will include a race at Circuit of The Americas (COTA) – the soon-to-be-completed motorsports, entertainment and business development complex in Austin, Texas. The ALMS event will take place during the spring portion of the 2013 race schedule, which will be announced later this year.

Located less than 15 miles from the Texas state capital’s central business district, the unique 3.4-mile Circuit of The Americas will serve as a leader in sustainability through high-performance operations, design, research, education and partnerships, track developers say.

“The opportunity to partner with the Circuit of The Americas and bring North America’s premier sports car racing series to fans across Texas, at what is going to be one of the finest road-racing facilities in the world, is a natural fit for all involved,” ALMS President and CEO Scott Atherton said. “The addition of Circuit of The Americas to our schedule will be very well-received by our fans and stakeholders alike. We know we have a lot of ALMS fans in Texas, and for our teams, manufacturers and sponsors, Austin and the surrounding region represent an important new business market.”

COTA’s configuration includes 20 turns and a 133-foot elevation change as cars travel counterclockwise. Featuring architectural components from several world-renowned road courses, the $400 million facility will accommodate up to 120,000 fans and will be one of only 26 Grade 1-certified motorsports facilities in the world. In addition to its state-of-the-art racing accommodations, COTA will include a visitors center featuring outdoor live music space and a museum; a 40,000-square foot conference/media center; the ability to service technology, business and education needs; and a large medical center offering paramedic services, and EMS and medical student training, with other proposed amenities highlighting the complex’s master plan.

“Our vision is to bring premier sports and entertainment programming to Circuit of The Americas and to partner with motorsports organizations that put a premium on innovation, fan experience and environmental sustainability,” Circuit President Steve Sexton said. “The American Le Mans Series – with its highly competitive, customer-focused programming and its well-known commitment to Green Racing – certainly fits that vision. The ALMS at Circuit of The Americas will be an endurance race, which will be another thrilling experience for fans. We know ALMS fans to be extremely loyal and engaged, and we look forward to showing them a great time in Central Texas.”

The American Le Mans Series presented by Tequila Patrón is the certified Global Leader in Green Racing and is the only motorsports series to comply with the Green Racing protocols developed by the U.S. Department of Energy (DOE), the U.S. Environmental Protection Agency (EPA) and SAE International (SAE). These organizations see Green Racing as a way to foster technology developments for tomorrow’s production vehicles, enhance national energy security and reduce carbon emissions.

“The American Le Mans Series is the model for sustainability in the motorsports industry,” added Edgar Ferrara, sustainability director for the Circuit. “The Series’ commitment to environmental stewardship matches our own, as Circuit of The Americas has joined the Green Sports Alliance and is the first road racing facility to join the alliance. It’s rewarding to partner with a motorsports series that’s truly in sync with a cause that matters to us.”

“Knowing of Circuit of The Americas’ focus on innovation and sustainability, the opportunity to showcase our cars, our teams and our pioneering role as the recognized Global Leader in Green Racing just makes it that much better,” Atherton said. “Our competitors are looking forward to the challenge and intrigue of racing on what will be a world-class motorsports venue, and our Series is thrilled to welcome Circuit of The Americas as a key round for our 15th championship season.”

Round 4 of the 2012 American Le Mans Series season is the Northeast Grand Prix from Lime Rock Park in Lakeville, Conn. The race airs live, Saturday, July 7, at 4 p.m. ET on ESPN2. ESPN3 streams the race live, beginning at 2:45 p.m. ET. The Series’ official website, ALMS.com, offers live in-car cameras, timing and scoring, and a live broadcast feed for viewers outside the U.S.