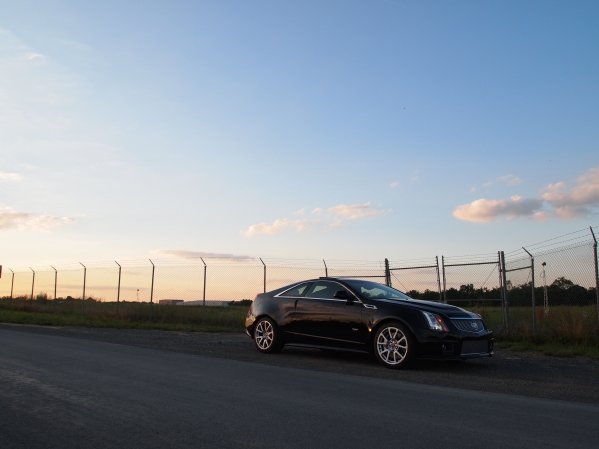 Please welcome friend of the site (and fellow track rat) Chase Adams for a guest review of his newly purchased CTS-V.


When you buy a new car, like I did a month ago, do you ever have that moment where deep inside you, your gut sinks? I have spent a long time saving for this new car. I invested in stocks quite a few years ago and have just sold them to use the profit for the car so it’s been coming for a few years now! Take a look at this motley fool stock advisor review to find out more about investing but as much research as I did for the car, you can’t help but have that gut stinking feeling. Regret, doubt, uncertainty: words which split seconds of thought might be named. The car buying experience is fraught with emotion. Where my stride may be sure going in, as I go out, my chin may sink as the sparkle wears off and I realize I have committed to only 4,200 lbs of well organized metal and plastic.

It’s a CTS-V that I bought. You’ve heard those letters before: fastest production sedan in the world, Zeus’ chariot with lightning and thunder, Germany ring something something. Mine is a Coupe. Those 4,200 lbs sure know how to make an entrance. The car rides a wave of equal parts clichés and controversy. With its booming voice and hairy chest, cloaked in a lustrously black tuxedo, this car is a glossy steed worthy of every bit of its praise. 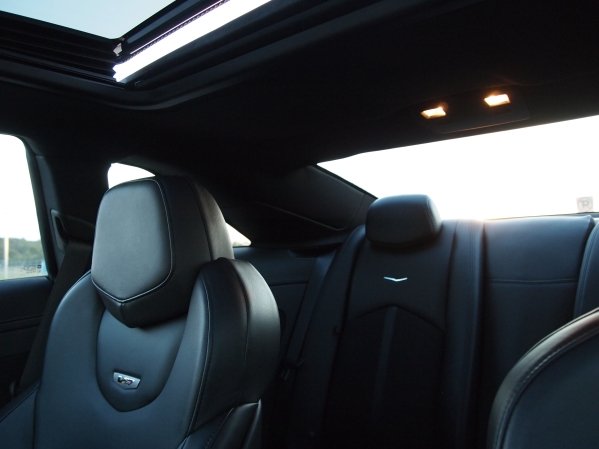 But does money buy happiness? I don’t think it does, but it doesn’t buy things much better than fast black luxurious cars. Cadillac might be on to something there, because my car is as black as they get. With Recaro seats in ebony black, bodywork in raven black, and trim in obsidian black, a shadow at night might only just be blacker.

From the driver’s seat, turning a CTS-V on for the first time is an experience. My first time was three years ago at a Virginian Cadillac dealer on a warm autumn day. Turn the key and the starter whines, a baritone voice expresses anger at being awakened, and the car reluctantly acknowledges its driver as it settles into a deep purr. The V might tell its driver it has no masters. Unsure of whether I was capable of reigning the beast in, I remember wondering whether 556 horsepower was too much. I car as stunning as this deserves to be protected! Make sure you install home security cameras wireless outdoor to keep your Cadillac or any other vehicle safe! 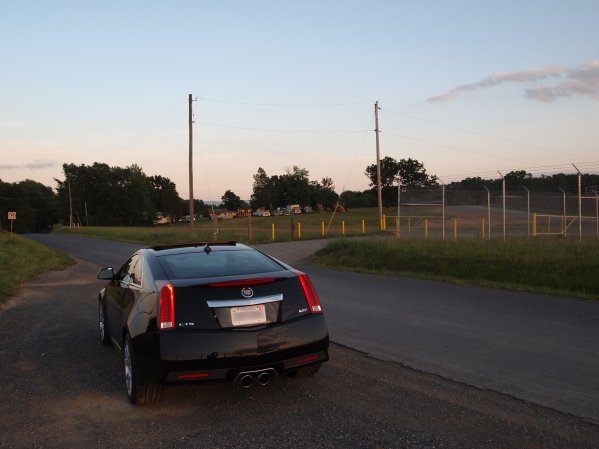 In the midst of gasoline and burnt tire smells at a track event in Summit Point, WV this May, SSL editors Jack, Byron, and myself jovially discussed the personalities of cars in terms of women. Despite his girlfriend obviously disapproving of the subject, Jack took the bait by giving his unique opinion on my newly purchased V Coupe. “The CTS-V Coupe is a sophisticated African American woman,” he said. “She is educated, dresses with purpose, and is beautiful. She is all of these things and more.” Continuing on, “But as she walks away you realize she has…” Jack now uses hand gestures, grabbing at the air, “a really big butt.” We all laughed.

The metaphor was a great way to highlight that the V Coupe’s design is very good until you get to the rear. The Coupe is a futuristic spaceship in an age where futuristic has been done too many times. It is sleek, pointy, and disproportionate in a way that is entirely unique. Over the years of debating whether to buy one, I grew attached to the ungainliness. It is ugly yet beautiful at the same time. It says to me “confidence in imperfection,” which makes it drip in masculinity to my eyes. I had to have the Coupe version of the CTS-V. 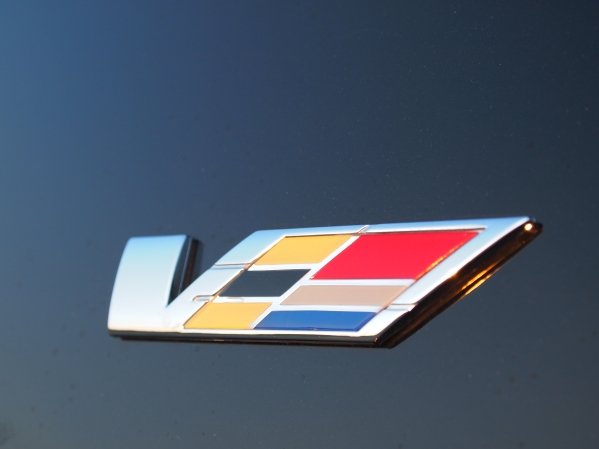 The V feels masculine. Edging off the heavy clutch, the heavy flywheel feels like a sledgehammer to the heavy differential. The tires seem surprised by the torque, as though it were an unrealistic amount for their meager ability. Still in the parking lot, this car is unhappy with 15 miles per hour. First gear goes to 50 mph and it gets there fast. The car does not mince words in letting its driver know this.

Bystanders seemingly know this too as the CTS-V growls past them. The unique design is eye catching, almost exotic. The thumbs go up and the fingers point. While we stopped to chat in front of a coffee shop during my test drive, the salesman, my wife, and I watched a man come up to the car and gawk. I gave it the beans and the man grew a smile like it was planted in Miracle Grow. “Holy **** what a car” he yelled hoarsely. The day went on and later I bought the car. I suspect the onlooking man had more to do with the sale than the salesman. However, as I rolled off the lot, I had that sinking feeling again. It was only a car, and was all that commitment worth it? 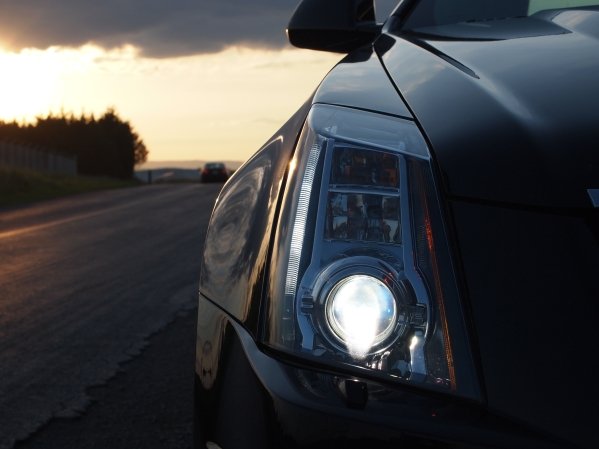 Turning onto a 55 mph highway, the tires are upset again. The throttle is tentatively depressed, the RPMs are rising, the huffing, unwound sounds begin the climb to crescendo. It’s second gear when the tires come loose as speed has caused too much confidence in the driver. Slamming to third, the sledgehammer clutch action reverberates through the car. 60 mph is flying by and the tires are still unhinged. There is mad laughter coming from the driver’s seat. The car is insane. The sounds of wind, supercharger whine, and calm thunder are bliss.

Later that day, the next corner is approaching fast. 90 mph is on the speedometer. Car tells driver he is secure. The trees fly by as the car turns and lunges to the next corner. This turn is tighter, so the brakes are applied. Losing speed at a tremendous rate, the car enters the turn. Maintenance throttle eagerly scrabbles the outside tire via the limited slip mechanism. The car is on the verge of oversteer, yet car tells driver he is secure. The turn abates and throttle is once again slowly returned. The car measuredly takes steps to the outside of the turn building speed at a tremendous rate. 60 – 70 – 80 mph fly by. Few cars have made the driver feel comfortable at these speeds. The CTS-V is still eager for more. 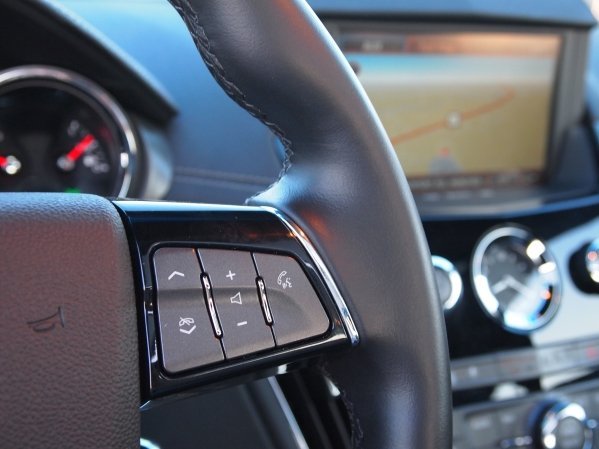 I am driving home with my new prize now. Victorious king returning to castle. The doubt is still fleeting. Was it the right decision? Like many car guys, my attention to cars had been like a bee to blossoms, rapidly moving from one to the next. Would this car hold my attention? Could the money be better spent? The uncertainty spun wildly in my mind.

But then, like a clearing storm I remembered all the moments over the last several years I had spent being enchanted by the very car I was driving at that moment. My car. Remembering how the car had captured so much of my attention over the years reconciled my worries. This car was special. It had me hooked, like a drug, only it wasn’t a case of simply looking up a thc half life chart to see how long it was going to stay in my system for. No, this was a 556 horsepower and Recaro seat clad drug. A drug of the only variety that could suit a car enthusiast: a very fast and very special car. 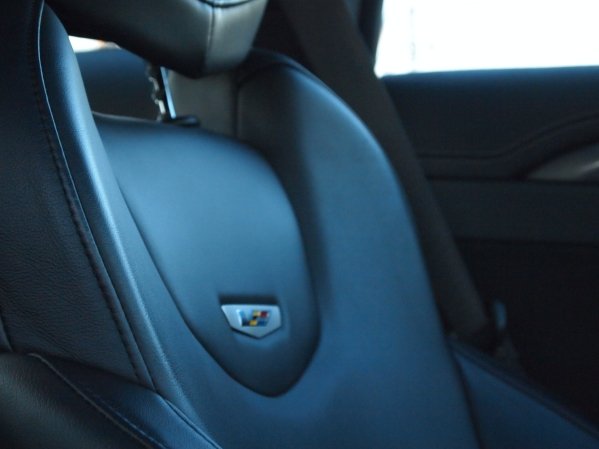 I had tried the M3, the 911, Cayman, TT-S, and S5. I will not be presumptuous enough to say the CTS-V is a better car than any of them because it is not. However, I will say the CTS-V seduced me in a way none of the other cars did. Yet I look at my CTS-V sometimes and notice how its construction is not special, nor are its parts. The power is impressive, but yet power is not its most impressive feat. I am perplexed as I look away, not being able to understand what the car did to me to make emotions where other cars did not. The CTS-V is alive in a way that is rare for a car.

Perhaps then, that is the CTS-V’s defining feat: the car is strangely alive. On one hand it is scary, bestial, and angry. On the other, it lofts its driver as a hero, inspiring confidence. The push-pull of emotion engages the driver, turning drives into experiences like few cars can. So while it does not answer some fundamental life question, or fill some unanswered need, it is desirable in a way that makes its cost somehow trivial.

If you were expecting an unbiased review of this car, I am sorry because you did not get it. I am damaged goods in terms of bias because I liked this car so much that I bought one. So of course I would say that this car offers an incredible experience. So of course I would be first to recommend that if you like cars, you should look forward to driving this one. However, what I can say is that I bought the car because it goes beyond being the sum of its parts. While its abilities are impressive, they are not what make it special. There is something else lurking in there. I’ll let you know what it is when I can put my finger on it.