Sporty hybrids have come quite a long way since the aforementioned Accord, and now that they’ve come into their own a bit, we feel it’s time to give them a good, solid look from an enthusiast perspective. In this post, we’ll take a look at three hybrids marketed to enthusiast buyers–the Kia Optima Hybrid, the Infiniti M35h, and the Lexus CT200h–and rank them from least to most attractive from a driver’s standpoint. I know what you’re thinking. Hybrids? On Speed:Sport:Life?  Fear not, my friend. We’re not here to figure out which cars are the best at being hybrids. That’s for other people. We’re here to determine which hybrids are the best at being cars–fun cars. We’re somewhat infamous for doing money-no-object comparisons in the past, and this will be no different, but the point here is to figure out whether any of these greenwashed go-getters hits the enthusiast sweet spot.

And with that, let’s jump right in.

We start with our least favorite. If you’ve been reading SSL for a while, you know that I had great things to say about the refreshed Lexus IS F last year. With the bar thusly set a bit high, I welcomed the opportunity to check out their new hybrid hatchback. Here, unfortunately, the news is not so good.

Let’s start with the positives. While our CT tester lacked the F-Sport suspension and tire/wheel package, its relatively compact size and diminutive curb weight makes it the most nimble and lively of the bunch. It may lack the Infiniti’s brash, hybrid pony car attitude, but it makes up for it with agility. The fantastic seats back up the CT’s sporting credentials, representing the only truly conventional sporting aspect of the interior.

But while the Lexus is the lightest of the tested hybrids at ~3,200lbs, it’s also the least powerful by a significant margin. With a power plant sourced from the Prius, the CT only boasts 134 ponies–72 fewer than the mid-pack Kia and 226 shy of the beastly Infiniti.

To make matters worse, the parallel/series hybrid arrangement of the Prius also carries over, so not only is the car lacking in power, but it delivers it sluggishly and noisily. It’s not a pleasant sort of noise either, as anybody who is used to CVT-style NVH can confirm. There’s no rumbling or purring here, just a harsh blarble of constant-RPM engine noise set against vibration from the drivetrain.

And while this combination of low power and a hyper-efficient drivetrain makes it a great hybrid, it doesn’t do much for the fun factor. It’s no surprise that Lexus makes the best hybrid here (we averaged 40mpg on the dot in mixed driving), but the best performance hybrid? Afraid not. Like the original 2008 IS F, a great deal of potential is wrapped into this somewhat middle-of-the-road first effort. The chassis is promising and the ride is almost perfect, but the power delivery is a disappointment. Here’s hoping that Lexus can work the same magic they did on the refreshed IS F and bring us a second-effort CT that really hits it out of the park. 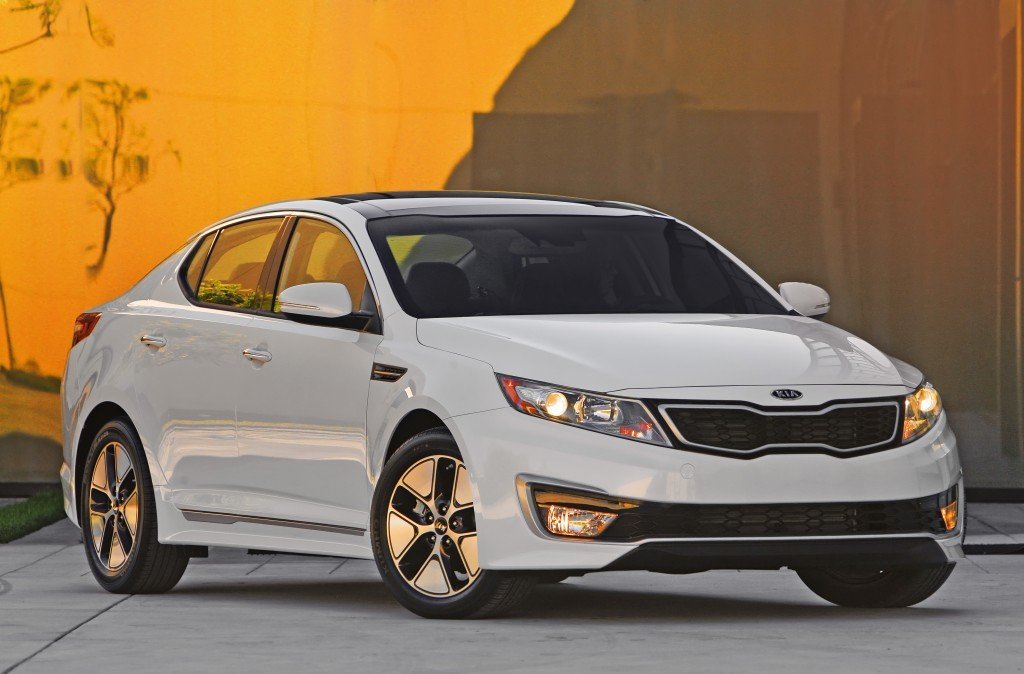 If you’re familiar with my earlier evaluation of Kia and Hyundai’s latest efforts, then you already know that I came away relatively impressed satisfied by the Optima and Optima Turbo. For better or for worse, that formula carries over to the Optima Hybrid.

Everything we expect form the Optima is here—an attractive, functional interior (with a few too many buttons for my taste, but nothing out of control); great exterior styling; sporty suspension tuning (compared to the Sonata, anyway) and great power delivery. Like the big Infiniti, the Kia mates a traditional step-geared automatic to its electric assist system. While this makes it less potent as a hybrid, the more conventional drivetrain setup is a little more inviting to performance drivers. Sport and Economy modes for the hybrid system provide different throttle and electric power delivery settings, but in the real world, don’t actually seem to make a big difference in fuel economy. One black spot on the drivetrain is the gear selector. Manual mode feels very vague, resulting in missed shifts after a bump of the selector doesn’t quiiiiite make it to the sensor. A mild frustration, but a notable one.

And on that subject, the overall fuel economy of the Optima Hybrid didn’t exactly blow me away. Between myself and another contributor, we weren’t able to do better than 33 or 34mpg in a handful of commuting arrangements varying from around 75% city to almost 90% freeway, and this in a car rated at 35mpg city and 40 on the highway. As a hybrid, I must admit, the Optima doesn’t really impress. 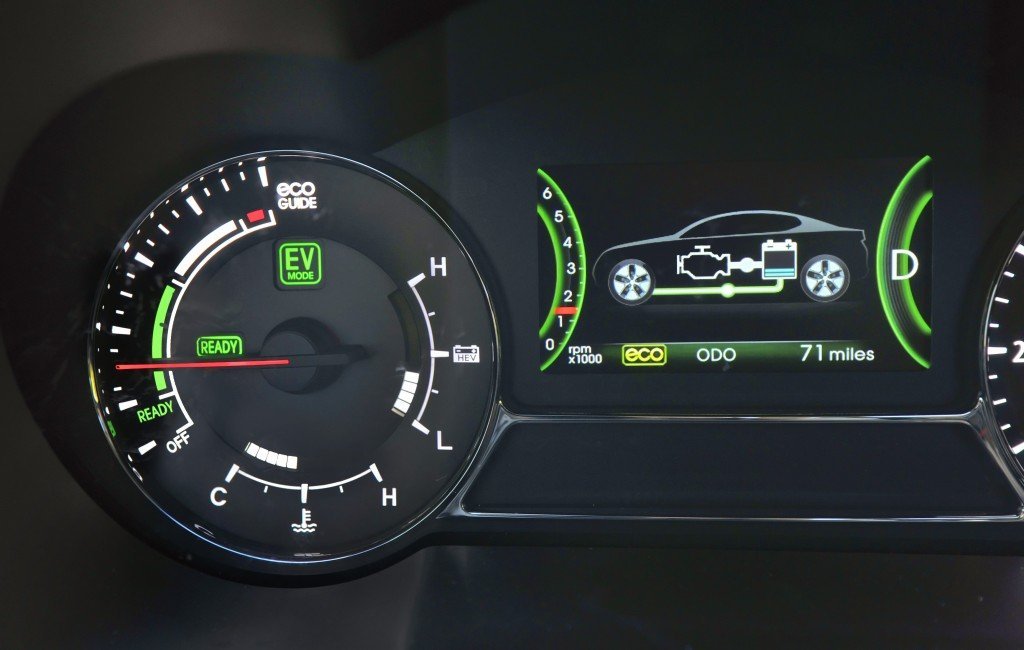 As an enthusiast car, however, the Optima fares much better. The roughly 200hp combined from the hybrid system made the Optima much more satisfying to drive than the Lexus, even with nearly 3,500lbs to haul around. Here, my friends, is a mainstream hybrid sedan that quite adequately gets out of its own way. Toyota’s latest Camry has moved in this same direction, so the gap to their Synergy Drive systems isn’t nearly as big as it once was, but the added thrust is welcome in a segment that was until quite recently dominated by rather sleepy offerings.

There’s one last thing which carries over from the original Optima, and that’s the steering calibration. This was part of the 15% or so of the original which we found fault with. It’s not awful, but it’s just not there—the type of system where you find yourself constantly correcting the car’s trajectory on the highway. Part of this is likely down to the tire selection, but honestly, it’s just not something I can get my head around.

So while the Optima represents an excellent effort and a breath of fresh air for the hybrid family car segment, unfortunately for the Kia, it’s not quite enough to take on our favorite of the current performance hybrids. 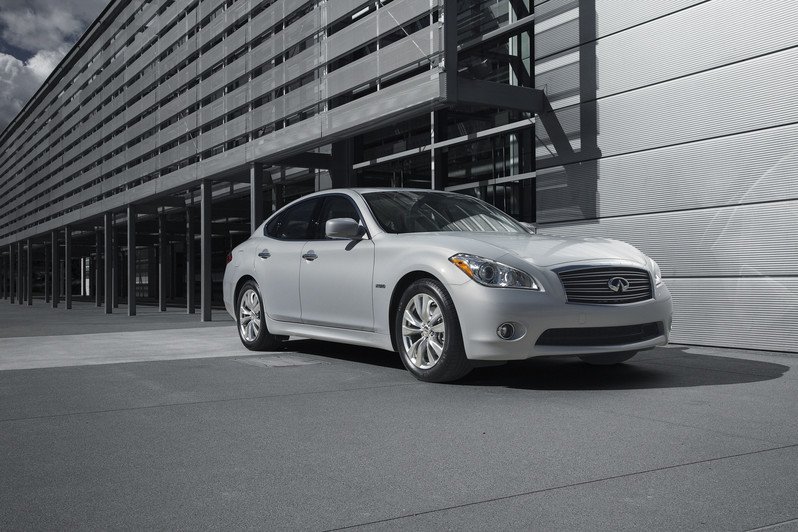 I know what you’re thinking: The Infiniti won because it’s the most expensive, most powerful, and most luxurious. Hold that thought, though, because that’s not the point. The Infiniti wins because it’s so much like its V8-powered stable mate that it almost-allllmost makes the M56 obsolete.

Let’s start with the numbers: ~360hp, some ungodly amount of torque (Infiniti doesn’t advertise its total system torque output, but it has to be somewhere between 300 and 450lb-ft), and 4,100lbs. Yes, it’s heavy, but it’s got the grunt to back it up. The M Hybrid will crack off 0-60 sprints in under 6 seconds, making the Optima’s mid-8-second runs feel lethargic and the CT’s 10-second figure look positively pedestrian. It’s an unfair comparison to be sure, but it’s necessary for context. Here’s some more: A ~5.5-second 0-60 run in the M Hybrid makes it only a half a second slower to 60 than the M56 we tested last year (a gap that it maintains through the ¼ mile). That’s not just adequate, folks. That’s quick. And the fuel economy? Our best average in the M56 was ~20mpg. The Hybrid? 27mpg, no matter how we drove it. That’s a 35% improvement over the V8 in exchange for a 10% drop in acceleration.

So how does it drive when the wheel isn’t pointed straight? Quite well, in fact. The hybrid-friendly, all-season tires did little to subdue the M’s already tail-happy attitude. Getting fully crossed-up when turning onto a highway from a stop prompted grins from passengers (and this driver, of course) and cross-eyed looks from passers-by. The M35h cannot be had with the M37 or M56’s sport package, so you have to make do with the 18” wheels and standard suspension, but since Infiniti tunes their vehicles’ ride and handling a lot more aggressively than some of their competition, the Hybrid’s chassis doesn’t feel like a compromise.

Where you do have to compromise is the transmission. Like the Optima, the Infiniti uses a traditional automatic, and like the Kia’s, it’s a bit awkward to use with sporting intentions, and even with all that power and torque available, it’s easy to get lost in the M’s 7 gears. And while the Infiniti’s interior is by far the most comfortable and attractive, it’s not the most sporty. The seats are big and soft, the dash very decadent and expensive-looking, but nothing really screams sporty. The nod goes to the Lexus here.

So yes, I may have confirmed all of your expectations so far, but here’s the kicker. The Infiniti doesn’t win because it’s the most powerful, the most expensive and the most luxurious car we tested. In fact, the Infiniti wins because it’s fun, fast, and surprisingly, a very good value. The M35h costs less than the M56—$5,500 less, to be precise—despite delivering nearly-identical performance. That’s no insignificant chunk of change. Consider for a moment that the Optima Hybrid carries a $600 premium over the base Turbo model—a car with which it can’t possible compete on performance—and the value proposition of the M makes more sense.

Yes, the M35 Hybrid is expensive. As it has been said, in this, as in all things, context is king.