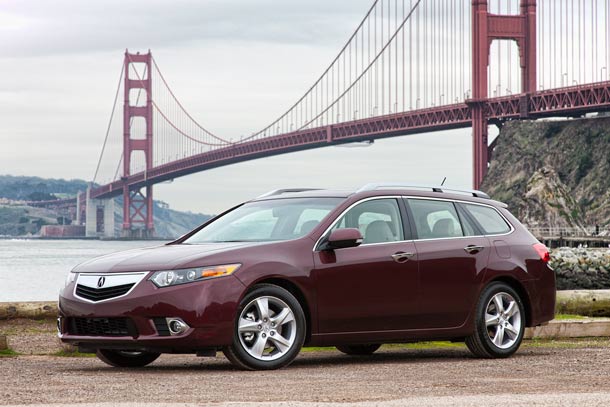 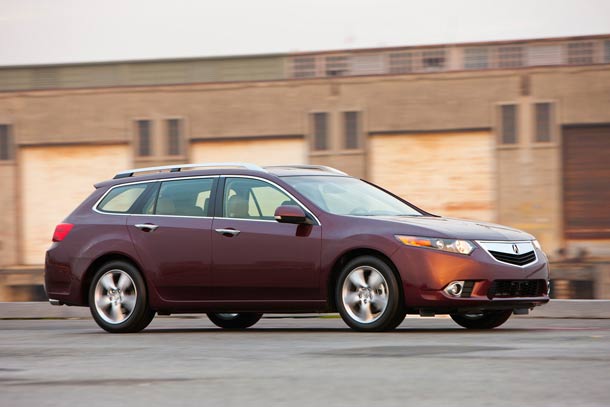 Though the TSX Sport Wagon is essentially a lightly reskinned European Honda Accord like its sedan sibling, it is one of the best looking vehicles in Acura’s lineup.  The TSX doesn’t suffer from the odd proportions of the corporate beak like the TL and actually has an aggressive looking stance when viewed from the rear.  We personally think that the TSX Sport Wagon actually looks better than the TSX sedan because of the rear profile.  Chrome treatment is abundant throughout, from the roof rails to window trim to door handles.  The TSX Sport Wagon is one of the few vehicles that actually looks more expensive than it is. 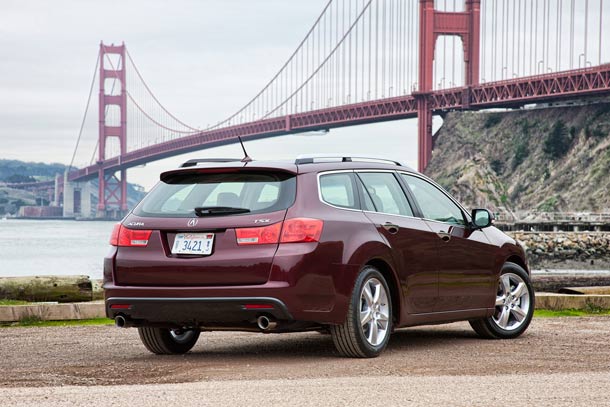 The interior of the TSX Sport Wagon is equally as impressive as the exterior.  High quality black leather, high quality plastics and just the right amount of brushed metal-look trim really give the TSX an upscale look that separates itself from its more pedestrian Honda Accord cousin.  Most radio and HVAC functions can be directly carried out with the push of one of the many buttons, though some features still needed to be activated through the easy to use menus on the navigation system. 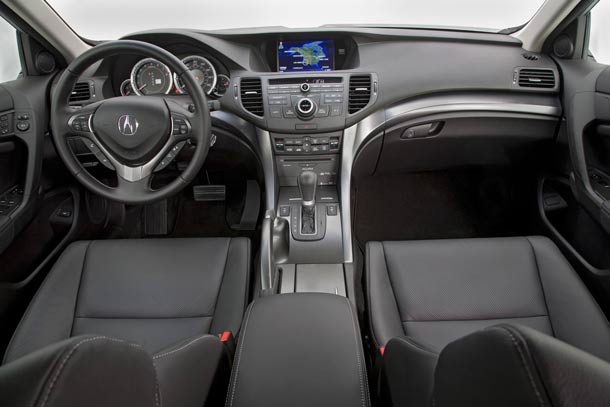 The rear cargo compartment of the TSX is large enough to fit a few days worth of luggage for 3 to 4 people comfortably, but gets a bit on the tight side when you start adding larger hard side suitcases.  Ease of loading the rear compartment is a bit hindered when it is more than halfway full due to the tapered design of the TSX. 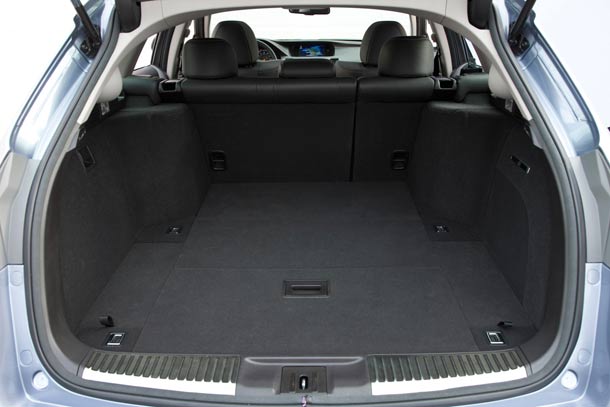 Under the hood, the TSX Sport Wagon features a 201-horsepower 2.4-liter 4-cylinder engine which makes 170lb/ft of torque at 4300rpm.  Power is transferred to the front wheels by way of a 5-speed automatic transmission.  While the TSX Sport Wagon won’t be winning a ton of drag races with the 201 horsepower engine, it still does a reasonable job of getting the 3,600 pound wagon moving and never felt underpowered.  An optional V6 engine might be more befitting of the TSX Sport Wagon, but of course that would increase the cost of the car and we’re not entirely convinced that it needs it.  The EPA rates the TSX Sport Wagon at 22 mpg city and 30 highway.  We averaged 26 mpg in mixed driving.

The only real problem we have with the TSX Sport Wagon is in its name.  While the TSX Sport Wagon is certainly more fun to drive than the average mid-size sedan,  it’s still a bit short on the sport side of things largely in part to the complete absense of steering feel and a suspension that also allows the TSX to roll quite a bit in corners.   Take out the word ‘sport’ and the TSX Wagon is still the same great driving experience as the TSX Sedan.

Despite our minor gripes with the performance of the car, we grew to really admire the TSX Sport Wagon in the week we spent with it.  With its great looks, tech offerings and comfortable ride and the TSX Sport Wagon is a car we would be happy to put mile after mile on.  Buyers need to forget about the wood panel Country Squires of days gone by and realize that modern station wagons are more engaging to drive than most SUVs, while providing nearly the same amount of cargo room as the best selling xUVs on the market.  The Acura TSX Sport Wagon is an exceptional example of the modern station wagon, and one of the best utility vehicle values on the market today.

Acura provided Speed:Sport:Life with the vehicle for review.