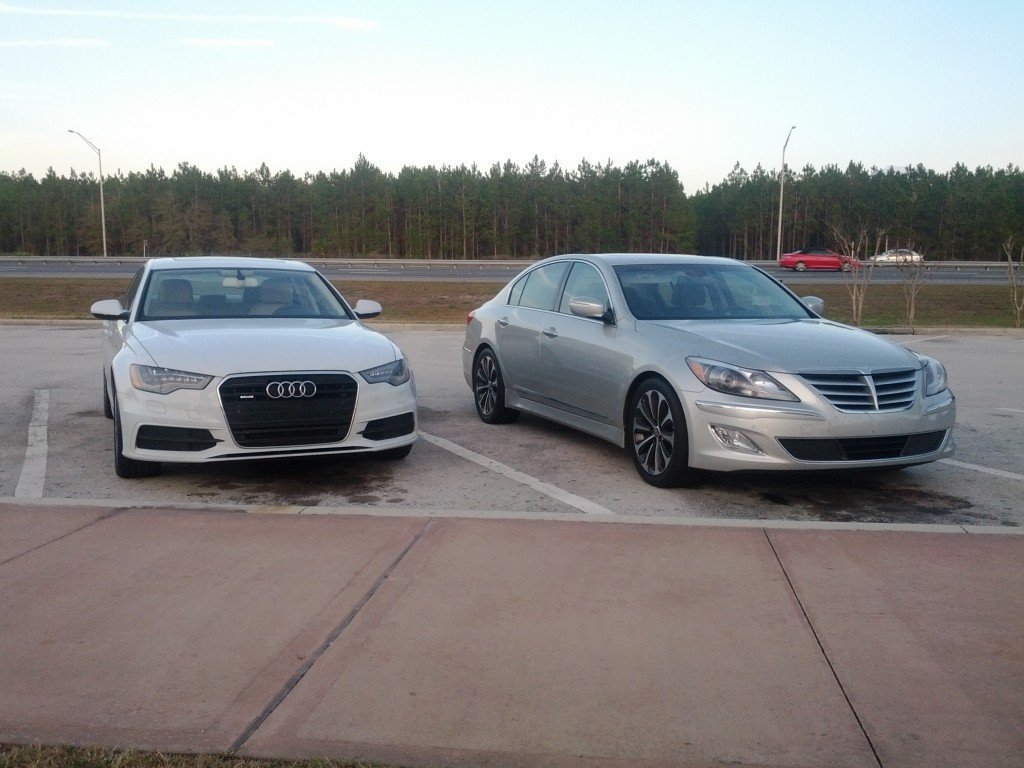 Last week, in my review of the 2012 Kia Rio SX Sedan, I posited that the default answer to the question of “what makes the best road trip car” was a big, soft luxury car—a wafter, if you will. This week, we’re looking at two such machines to see how well they do against each other, and how well they represent the traditional cruiser market. They’re our null hypothesis, if you will, as we try to decide whether a small car can do the job just as well or better. Oh, and there will be some back roads and on-ramps involved, too. Don’t fret.

We’ve done some fairly off-the-cuff comparisons over the years, but today we bring you the rare showdown that actually features similarly-priced competitors with very different approaches to midsize luxury. The defending champ is the Audi A6 S-Line, equipped with their now-ubiquitous 3.0L supercharged V6. The challenger: Hyundai’s new Genesis 5.0 R-Spec, delivering traditional luxury power from a 5.0L V8 with a non-traditional luxury badge. Both cost $50k. The Hyundai has the edge in power and boasts hoon-friendly rear-wheel drive; the Audi offers up quattro and the promise of superior fuel economy. Which will best devour an 800-mile sprint from suburban Maryland to Daytona Beach, Florida? Will they both leave the Rio in the dust? Click on through to find out.

Let’s get the obvious out of the way: Each of these cars enters this test with a set of significant disadvantages. The Audi is down on power, more expensive, heavier and hampered by cold-weather tires. The Hyundai is thirstier, lacks all-wheel drive, is already a full generation behind in equipment and has summer tires which look every bit the 10 thousand miles indicated by the odometer.

Our destination is the 24 Hours of Daytona, Grand-AM’s signature endurance race. We’re going down to embed with APR Motorsport and PR Newswire and cover the race live. It’s an exciting prospect, and we’re doing it on a shoestring. The A6 tester just happens to line up with our trip, and will look right at home with the APR folks and their stable of Volkswagen and Audi products, including the #51 APR R8.

As we leave Annapolis on a late January morning, we’re under the clouds of one of the region’s two wintery storms we’ll get all season. The temperature is hovering just around freezing and sleet is mixing in with the spattering of drizzle as we make our way over southern Maryland back roads to link up with I-95. Nicole is ahead of me in the A6, which is right at home in what many owners will later tell me is “quattro weather.” The Genesis isn’t as surefooted. 400+ ponies won’t get you anywhere but sideways in this mess, and even that isn’t really happening thanks to the traction and stability control systems. The Audi aces everything but stopping distances in this mess. Weight and weather trump winter tires in this instance, and the A6 can’t keep much pace on the Hyundai for fear of running out of stopping room.

As we snake southward out of the D.C. metro area on I-95, I’ve already made up my mind about several aspects of the Genesis experience. For one, I’ve accepted the fact that I’m not going to see better than 22 or 23mpg. Even as the roads straighten out and traffic thins, the onboard computer struggles to show a real-time consumption any better than 25mpg or so. I can already see the Audi walking away with this aspect of the comparison. Another negative: I can’t stand the Hyundai’s adaptive cruise control. It works, but the gap settings aren’t versatile enough and the car tends to brake too hard and then overcompensate with throttle, leading to a rubber banding effect that is more annoying than helpful on the highway. 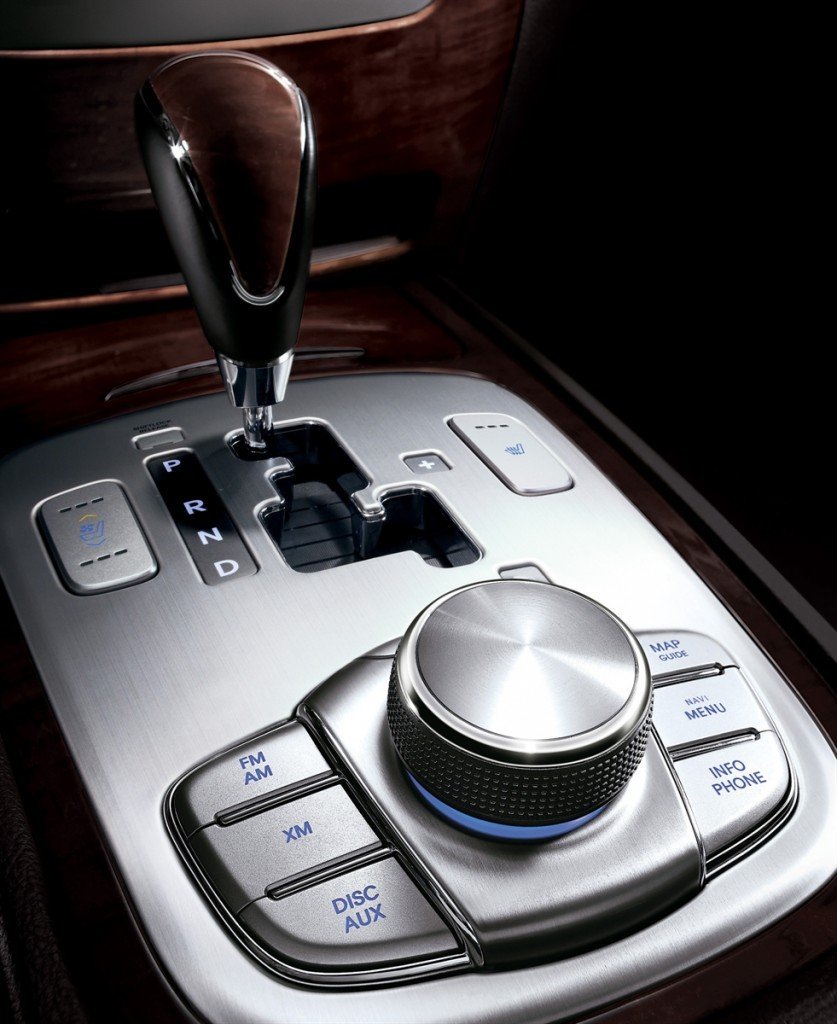 Hyundai’s center console. Simple, but not as elegant as the Audi’s. Few buttons for few functions.

On the plus side, the Hyundai’s interior, while not as nice to look or sit in at as the Audi’s, offers a level of elegant simplicity that is missing from the Audi. The Audi has more features, and thus more buttons, but this more sparsely-appointed interior just feels easier to live with. Satellite radio and a comfy seat will go a long way on a long cruise. Uncluttered car, uncluttered drive.

Despite low-mid 20mpg highway fuel economy ratings for both cars, their large tanks mean excellent range. Both have 20 gallons of fuel capacity, meaning 400 miles on a tank is easily done at highway consumption levels. If we can both keep the average above 20 (which we do), 833 miles translates to one stop each way. We elect to take our mid-trip fuel stop near Florence, South Carolina. We compare notes. Nicole, like me, finds the Audi’s dash layout to be more work than pleasure, but otherwise has no complaints. I complain for several minutes about the finicky cruise control and the lack of current-generation infotainment features. After filling up, we do a quick calculation. The A6 did nearly 26mpg on the first tank, the Genesis only 23.9. My earlier prediction is looking solid.

Under the Carolinas’ warm skies, the Hyundai’s previous tire disadvantage has melted away. As we grab the tight I-95 on-ramp, I decide to put the hammer down in the Genesis. The results are underwhelming. The willing 5.0L V8 delivers shove on demand, the rear tires mating to the pavement without so much as a peep, but it soon gets to the point where I can’t physically hold myself in the seat. The Genesis has substantial grip on these tires, but the car just doesn’t know what to do with it. The soft suspension actually helps to keep the rear end planted, but the smooth leather seats are so flat that I can’t properly exploit the traction with any steering dialed in.

Slightly chagrined, I settle in for the second half of the trip. 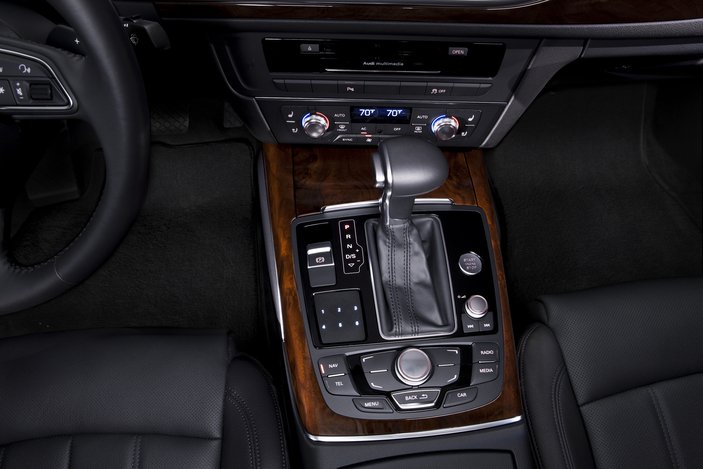 The Audi’s center console borders on cluttered, but the infotainment system is more modern and flexible and the look is still sleek and distinctly European.

There’s little to report between Florence and Jacksonville. I-95 straightens and flattens, and we cruise at a relaxed but brisk pace all the way to Florida, where the traffic (and thus my griping about the cruise control) picks up again.  We stop just south of Jacksonville to stretch our legs, both still feeling surprisingly good, and I snap a picture of the two cruisers side-by-side. The slime and grime from the morning weather is more apparent on the Audi’s crystal white coat than on the Hyundai’s pewter finish. Score one for the Genesis, I suppose.

We arrive a little over an hour later in Daytona Beach. For a 14-hour day, neither of us feels terribly exhausted. We have enough energy to go out for dinner and relax a bit before hitting the sheets. We’re up early in the morning to head over to the APR paddock and see what’s what. Both cars have tackled the first half of the trip admirably. We’ll cover the second half next week. Stay tuned.

Both vehicles were provided by the manufacturers for the purpose of this review. Big thanks to APR Motorsport and PR Newswire for the opportunity to cover the Daytona 24.