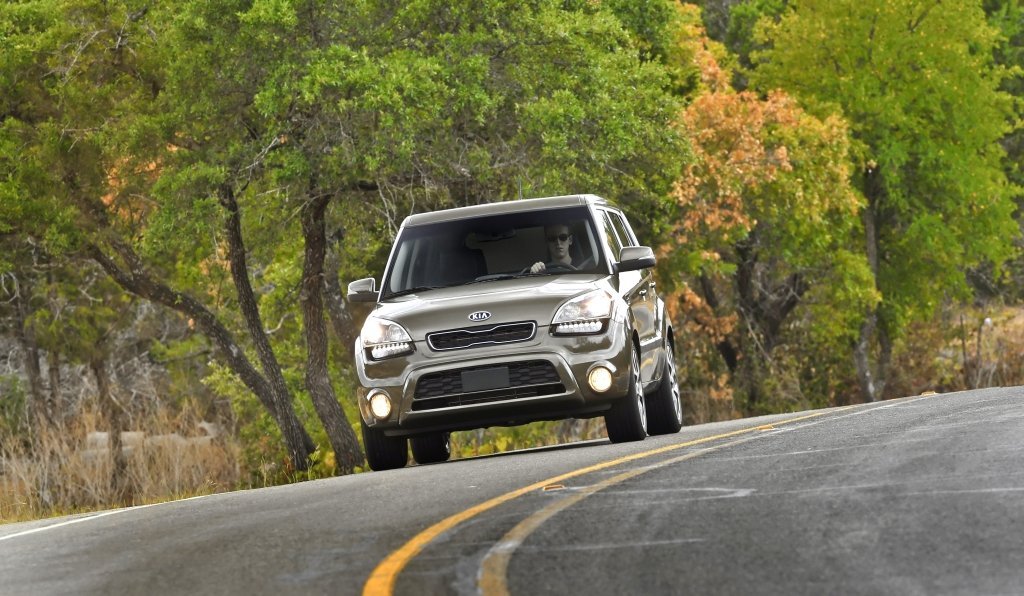 When John attended the Kia Soul media drive a year ago, he had mostly good things to say about Kia’s refreshed Scion alternative. John’s first drive was actually the third time somebody has written about the Soul for Speed:Sport:Life, and today, after driving a 2012 Soul+ for a week, we mark the fourth. You can find Zerin’s piece on the 2010 here, Cherise’s second look here, and John’s first drive of the refreshed lineup here. John’s piece contains technical information about the new engine offering in our Soul+ tester, so if you’d like to know more about Kia’s two-liter engine (or the rest of their new powertrain lineup), that should be your first stop.

Like its peers, the Soul is a bit of an oddity. It’s not really a compact hatchback, nor is it a CUV. Somehow it falls in between, offering most of the advantages of both with few of the drawbacks of either. With the exceptions of height and ground clearance, the Soul’s exterior dimensions are those of a small hatchback—162” long and 70” wide, with a 100” wheelbase. That’s smaller than a 5-Door Mazda3, for context. Inside though, the Soul has the seating position and shoulder room of a miniature crossover. In fact, the Soul feels downright airy inside. Considering how claustrophobic many compacts can feel these days, that’s quite an accomplishment.

It’s light too. Comparing it again with the Mazda3, which weighs in at >3,000lbs, our manual-transmission Soul+ is a featherweight at only ~2,700. 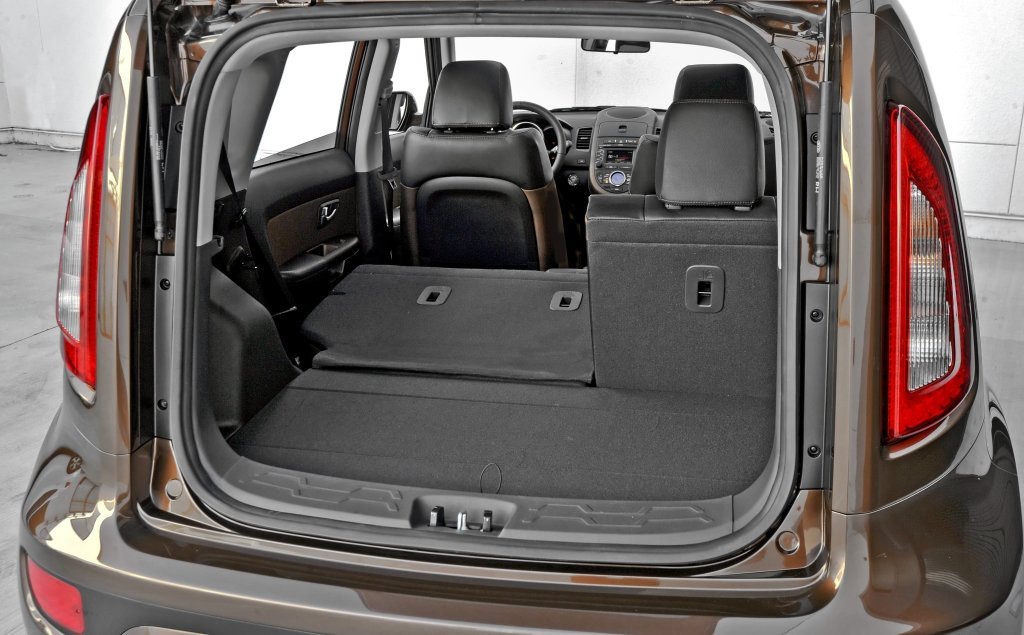 So what’s the secret? Well, there’s no magic involved. In addition to facilitating more head and shoulder room without an awkwardly shaped greenhouse, the Soul’s box-on-wheels design is exploited for maximum use of space. Ask anybody who has ever owned a minivan: A car doesn’t need to be big to feel big. Like a minivan, however, the Soul gives up some rear cargo space in favor of passenger room, and the absence of fold-flat rear seats did not go unnoticed.

It also helps if you aren’t prioritizing structural rigidity. As you may expect after seeing Kia’s mainstream-oriented marketing of the Soul (if you haven’t seen the Hamstars, then I don’t know what to tell you), it’s not really an enthusiast-oriented car. It’s a novelty for sure, and a neat car to look at, but its dynamic performance is fairly vanilla. That’s not to say it’s incompetent by any means, but it’s simply not set up to be a corner carver. The suspension is quite soft, and the OEM tires are of the fuel- and moron-conserving variety, delivering very low limits and very predictable break-away rather than outright grip. 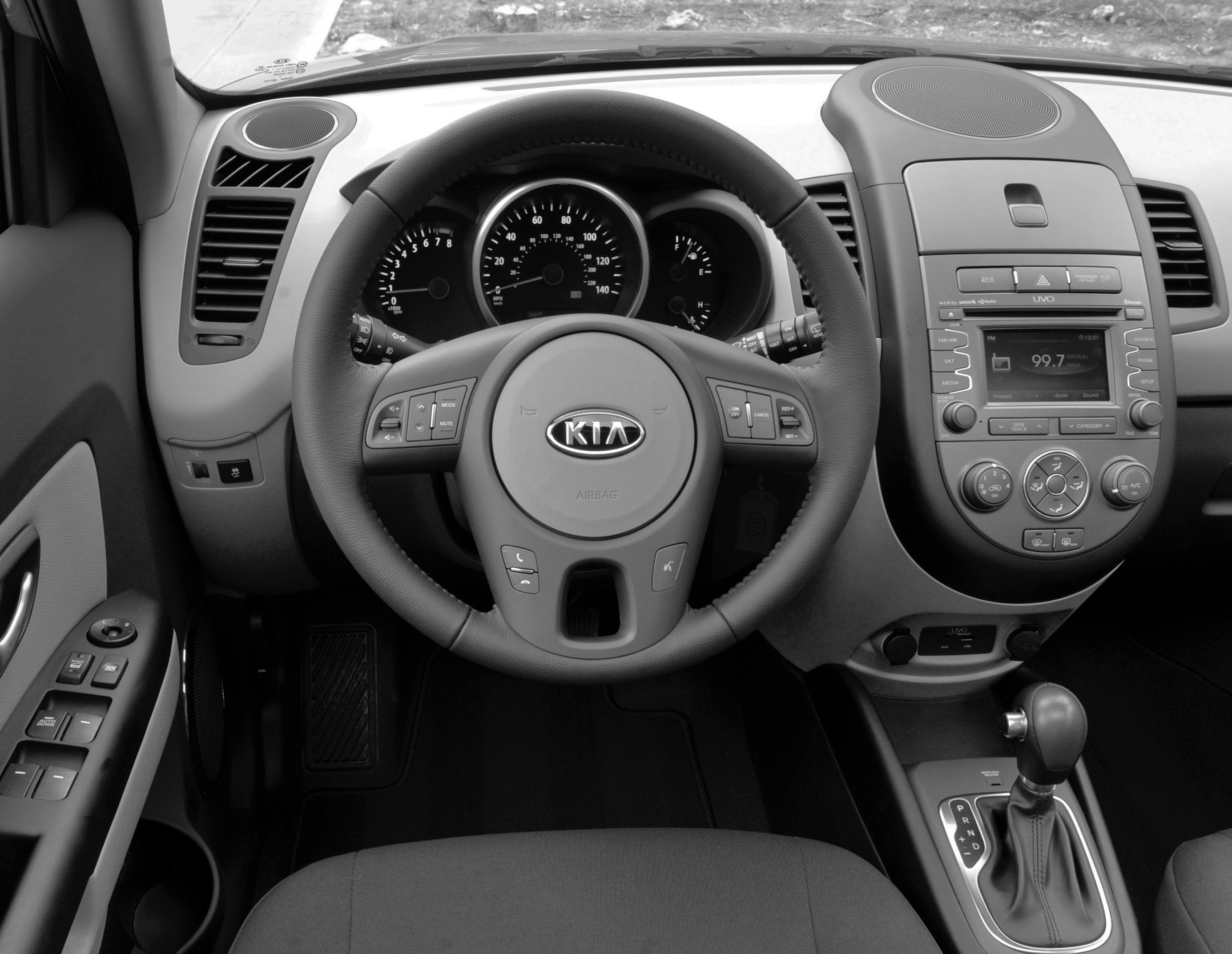 On the plus side, the 2.0L engine is surprisingly punchy, and when paired with the 6-Speed manual as it was in our tester, quite satisfying to rev out. And while it’s not the gee-wiz engine in the lineup, the 2.0L makes up for its lack of direct injection and advanced this-and-that with good, old-fashioned grunt, offering up 164hp and 148lb-ft of torque—an abundance of power, really, for a car this svelte.

And honestly, the Soul needed the power to win me over. Driving everywhere turned out to be far more fun than I had expected. I’ve regularly driven more aggressively in cars with less power, but the Kia’s CAFE-friendly tires add that extra “surprise, you’re going sideways!” element that is lacking from, say, my RT-615-wearing, 20-year-old Miata. 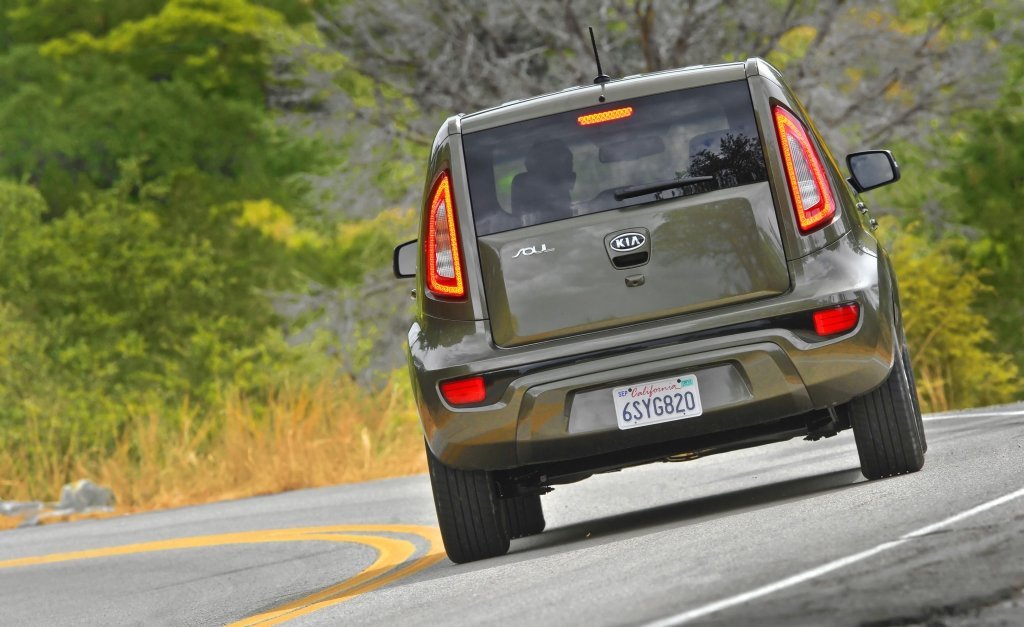 Considering the car’s weight and abundance of glass, it remains fairly quiet even when thrashed, and we were able to keep our average fuel economy display from displaying anything below 30mpg or so for the duration of our loan. The EPA says you should expect 26mpg in the city and 34 on the highway with this configuration, so it appears we were right on par.

As John pointed out in his first drive, the Soul has been a sales success for Kia, and it appears they’ve done nothing to mess with the formula. At $17,000 and change, our tester is affordable, efficient and supremely practical. With some suspension work and a fresh set of summer tires, it would probably handle the occasional autocross with unexpected grace as well, but we’ll save that particular test for our fifth take.