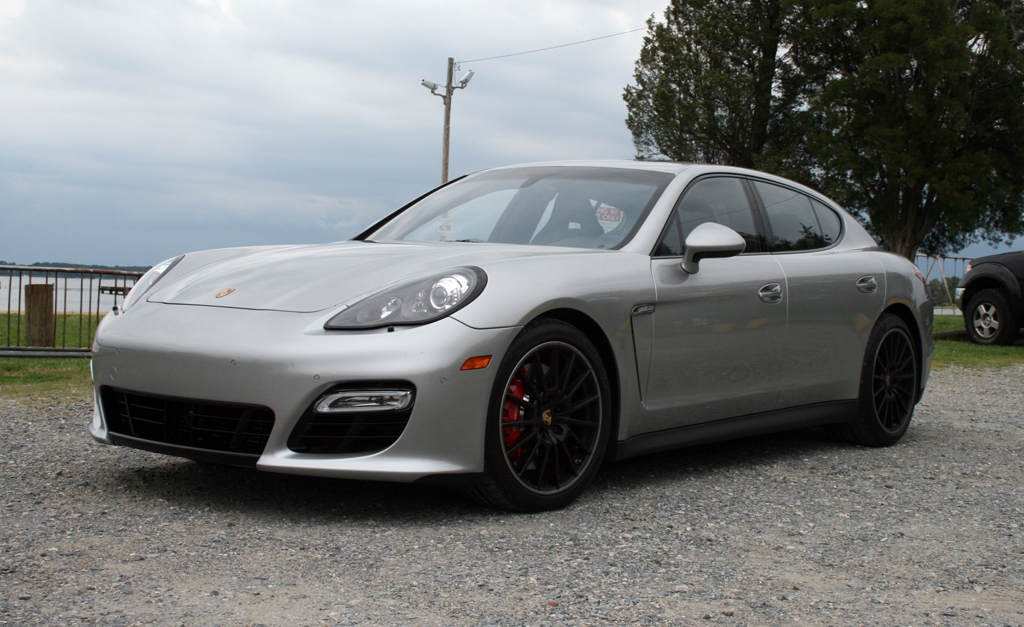 Photos by the author


To say the Panamera has been a controversial car for Porsche would be underselling it. If you look back, it represents the culmination of everything hardcore 911 purists declare to be anathema. It’s water-cooled, it’s front-engined, it’s V8-powered, and it comes with four doors and a nigh-on-endless order sheet littered with luxury-oriented features. If your litmus test for what should be available on a Porsche goes no further than “will it make it faster?” then your hostility is not unexpected. But don’t make the mistake of assuming the Panamera lacks performance features. Far from it, but they’re only a piece of the bigger package.

If you’re unfamiliar with the Panamera hierarchy, the GTS falls almost exactly in the middle of the lineup, just above the Panamera 4S and just below the Hybrid. This seems a bit artificial, as the GTS is actually more expensive than its greener counterpart, but we’ll go with it. Billed as the track-ready Panamera, the GTS offers features and options not found on other models, including a re-tuned, 430-horsepower variant of Porsche’s direct-injected, 4.8-liter V8, with the extra 30hp coming from a tweaked intake cam profile, a second air intake, and ECM recalibrations. Porsche’s Sport Chrono and the accompanying Sport Exhaust are also included with the base GTS ( both are available, either bundled or as Porsche Exclusive a la carte options, on any Panamera). 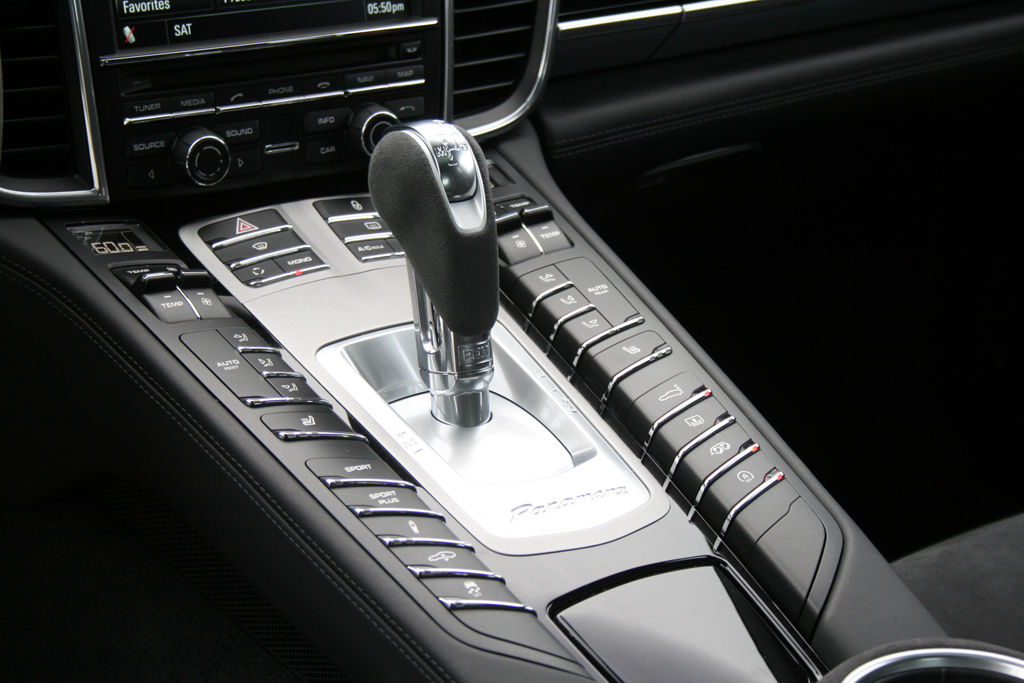 With Sport Chrono you get selectable Sport Plus mode (if you want more info about how Sport and Sport Plus modes operate, especially when paired with PDK, check out our road/track test of the 991 Carrera S here). While the availability of super-aggressive chassis, throttle and transmission calibrations may seem antithetical to the Panamera’s luxury mission, keep in mind that normal mode and all of its comforts is just a click or two away (or three or four away, depending on how far down Porsche’s center console rabbit hole you’ve gone).

This is the first Panamera we’ve driven at Speed:Sport:Life since Jack called the 2010 Turbo “The Porsche that doesn’t zig as much,” and I’m pleased to point out that Porsche has addressed at least one glaring issue with the original cars: The PDK buttons are gone, replaced by conventional paddles. Porsche started migrating away from the buttons with the mid-cycle refresh of the 997 911, and thankfully they don’t appear to be looking back. The GTS also offers a new take on the Panamera’s exterior styling, with aggressive front and rear splitters designed to convey the no-nonsense role it’s meant to play in the lineup. It’s not a dramatic change to the Panamera’s look, but it’s certainly different enough to stand out, and if you ask me, it makes the GTS the most attractive of the bunch. 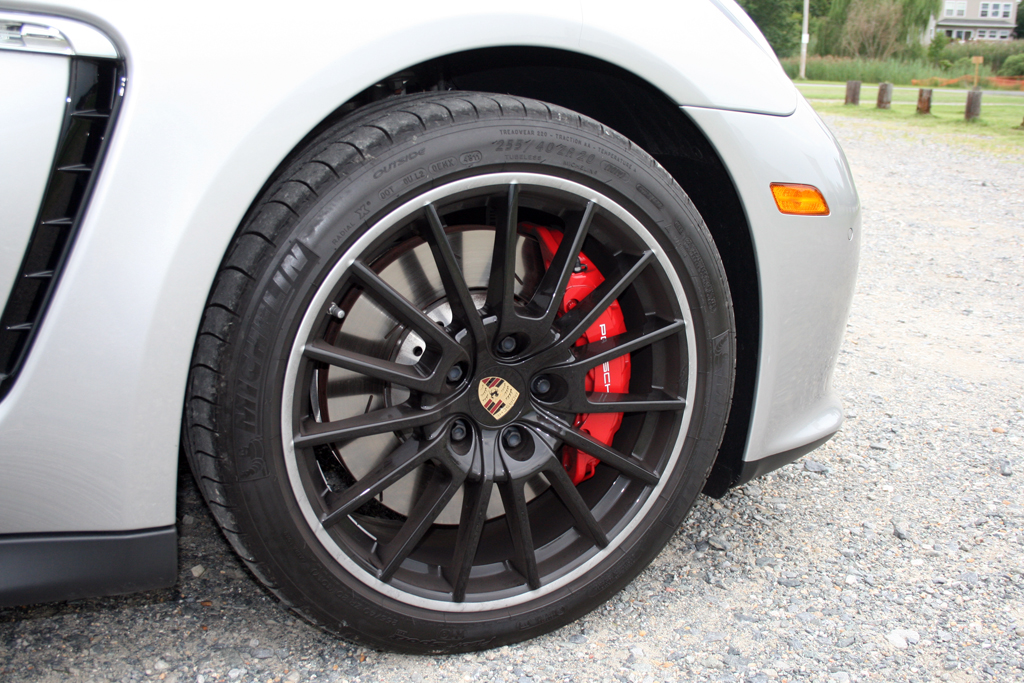 The Panamera GTS does Dr. Jekyll and Mr. Hyde better than any other sport sedan I’ve ever driven. When left in normal mode with the sport exhaust turned off, even our tester with its 20” wheels and summer-spec tires is whisper quiet. Credit some of that serenity to the optional thermal/noise insulated glass on our options list. I’d love to be able to say I verified its effectiveness by testing it against a model not so equipped that I just happened to have on hand, using a tool with a known margin of error of less than .0002 decibels. But I didn’t. It’s quiet. Just take my word for it.

But kill the comfort features and slap the PDK selector into “M” and the Panamera transforms into a snorting, snarling brute. It’s not unusual to drive a small car that feels much bigger than it looks once you start to flog it, but the GTS is the rare car that flips the formula. At 16’ and 4,300lb, there’s no mistaking it for a small car, but from behind the wheel with Sport Plus engaged, it feels lighter, tighter, and more composed than the Cadillac CTS-V coupe I drove a couple weeks ago. 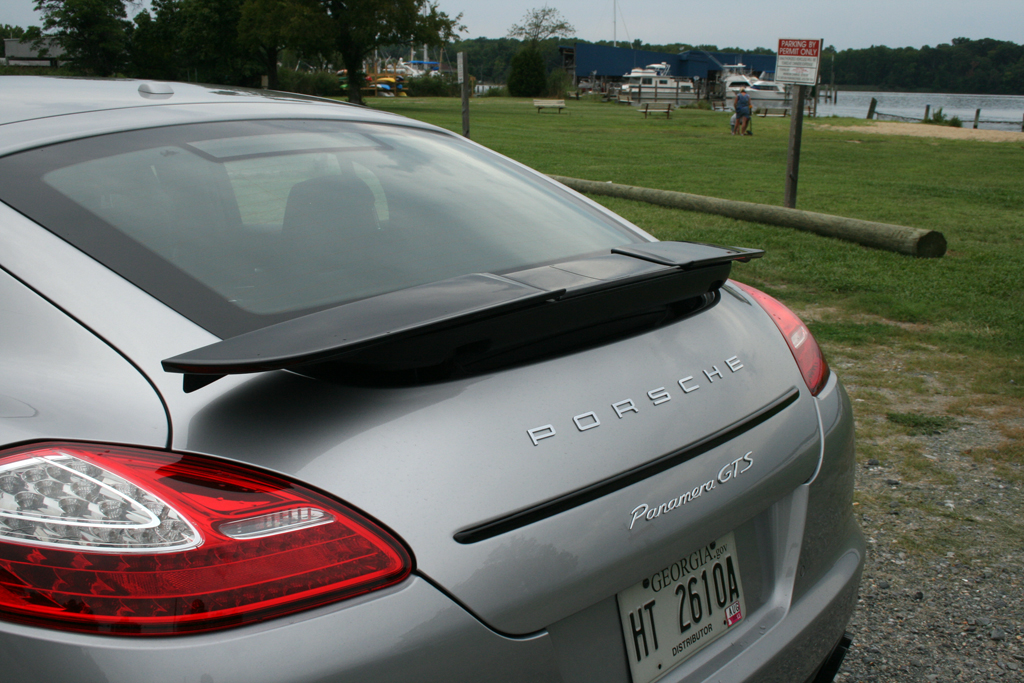 Tearing through Maryland’s rural back roads, it’s easy to lose track of the Panamera’s forward progress. At one point I look down at the gauges, expecting to see the speedometer needle hovering in the mid-60s. Fat chance. I look at the digital readout quickly just to be sure. Yep, that says 94. And this isn’t some arrow-straight farm road, but a rather tricky sequence of off-camber, semi-blind turns occasionally populated by County Police officers who don’t take too kindly to having their ambling journeys across the center line interrupted by Porsche drivers casually flirting with triple digits.

Casual. That’s a good word for it. The Panamera does a great job of putting on a show, but underneath all the bluster, it’s such a supremely competent car that thoroughly unreasonable street driving behavior is astonishingly simple to execute. The torque-vectoring all-wheel drive system and P-branded electronic wizards work together so effectively—so Germanically—that the GTS doesn’t feel like it’s being pushed until you’re doing something incredibly stupid. In a way, it’s the Audi formula cranked up to 12 or 13. It’s an astonishingly capable luxury sedan. Scratch that. It’s an astonishingly capable car, period. 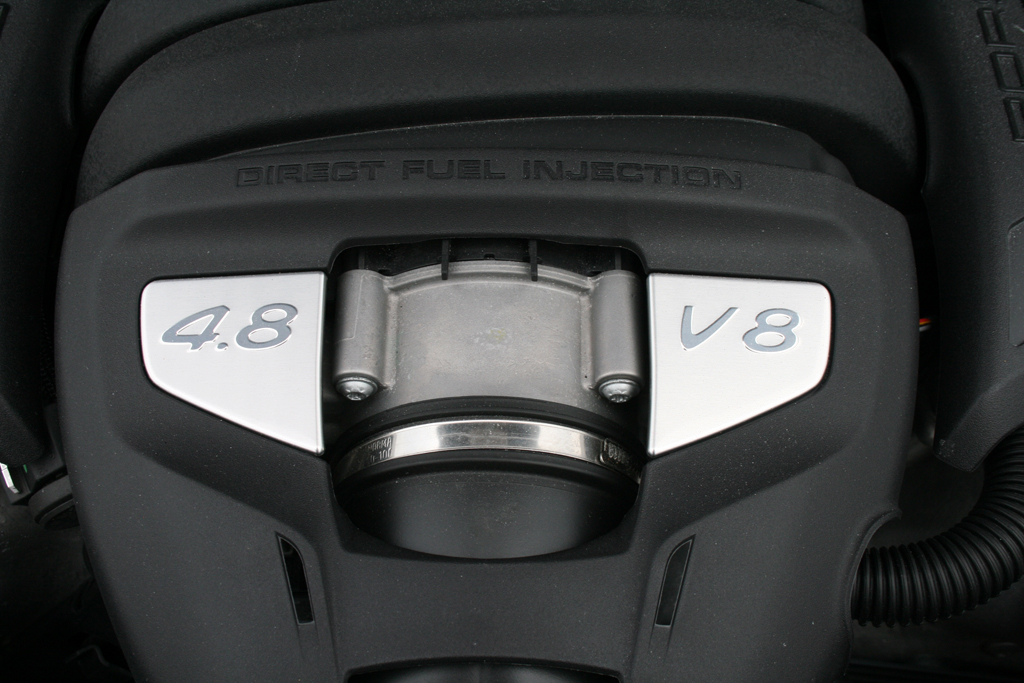 A sports car it is not, however. All of that capability makes the GTS a good bit more sterile than that 911 or Boxster sitting beside it in the showroom. Count us among those who wish the GTS were more closely related to the rear-wheel drive, 3,968lb Panamera S. All-wheel drive may be necessary to keep the Turbo and Turbo S models from vaporizing their rear tires every time the outside temperature drops below 50°F, but we’d gladly sacrifice some of the GTS’s brutal off-the-line acceleration if it meant a little less weight (~250lbs) and a little more rear-end activity.

Like the Cayenne, the Panamera is an unapologetic move to increase Porsche’s volume and stability. Neither is meant to replace Porsche’s iconic GT car. But that’s fine. If Porsche could sell 911s to luxury sedan shoppers then they wouldn’t have built the Panamera in the first place. If anything, these modern behemoths offer Porsche more flexibility in developing enough hardcore variants of the 911 to satisfy every Porsche enthusiast’s specific needs. 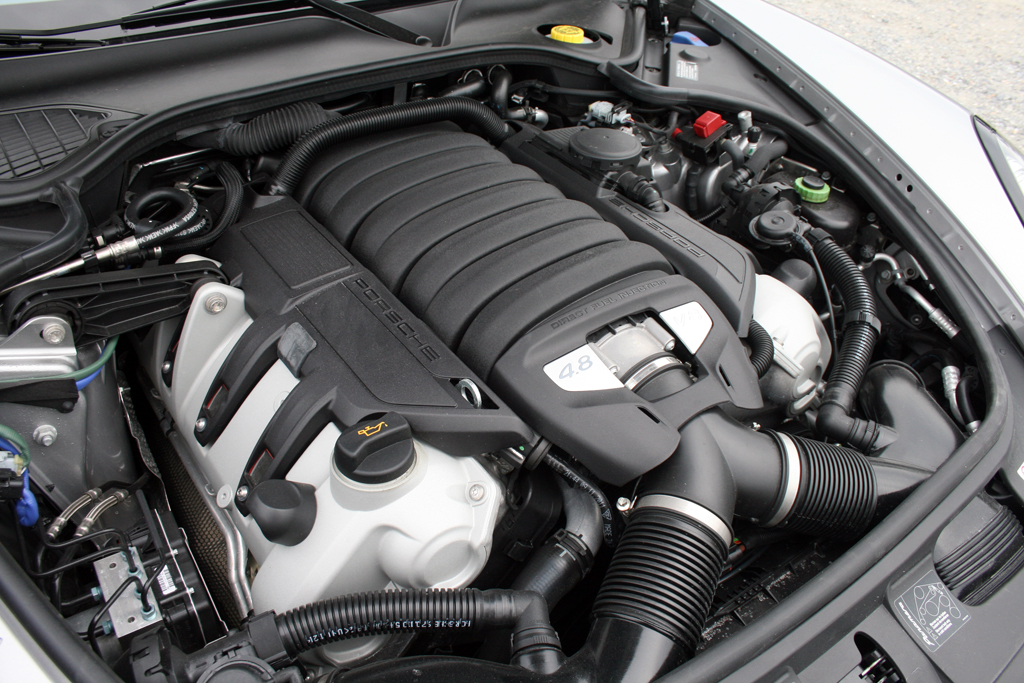 While we’re on the subject of shopping, let’s go back to the pricing for a moment. A base Panamera, with the 3.6L V6 and no options, will run you nearly $76k. An S, which is the first trim with the 4.8L V8, is just a hair over $90k, and the 4S starts just above $96k. To get into a GTS, you’ll be shelling out at least $111k. A laundry list of options, including the Burmeister Audio system, Porsche Dynamic Chassis Control, and various other performance and luxury accoutrements, puts the out-the-door price just shy of $150,000 for our tester, which overlaps a base Turbo by about $13,000.

Yes, these cars are pricey. Too pricey? That all depends. Why? Because it’s difficult to say exactly what the Panamera’s competition is. Porsche says it slots in against the European full-sizers (Mercedes-Benz S Class, Aston Martin Rapide, Continental Flying Spur, to name a few) but it’s actually smaller and in some cases much lighter (looking at you, Bentley) than most in the pack. Only the Rapide, Aston’s four-door “coupe,” is dimensionally similar, but it makes even the Panamera look like a bargain. 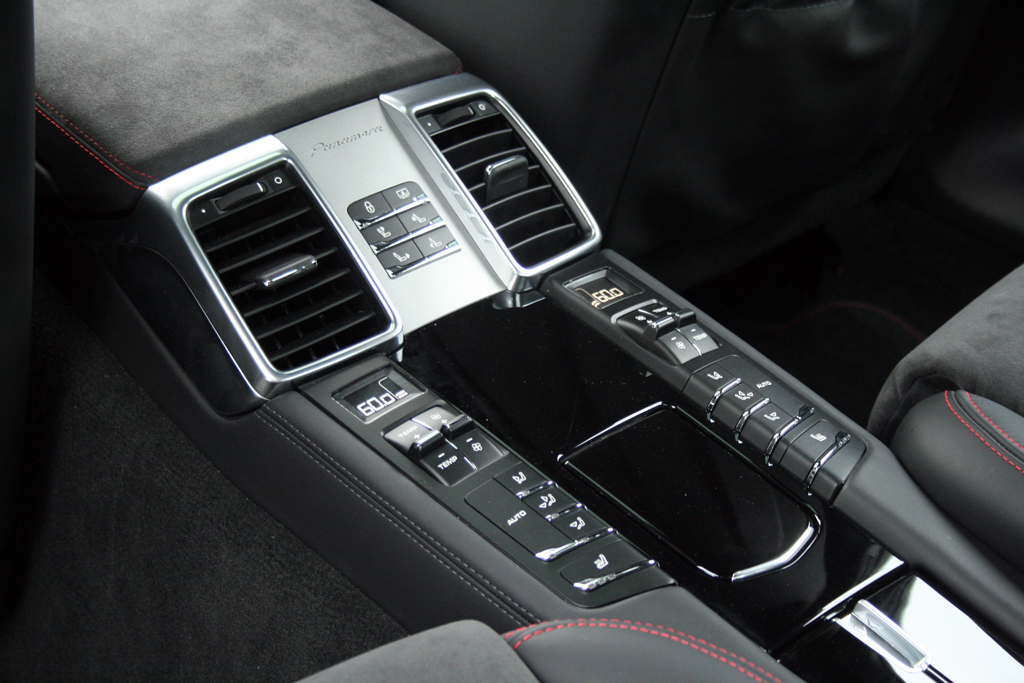 Between its shorter wheelbase and its fastback configuration, the Panamera takes up a ten inches less driveway space than most of Porsche’s targets. To put this size difference into perspective, the Panamera’s wheelbase is 5 inches shorter than that of a short-wheelbase 7 Series. That may not seem like much, but it’s the difference between a compact and a midsize car in many cases, so it’s not entirely trivial. A long-wheelbase 7 Series or a Continental Flying Spur will gobble up almost a foot more of your garage than a Panamera.

So the Porsche isn’t the bang-for-the-buck entry in the segment, but that’s no surprise. As I’ve said before, Porsche doesn’t sell cars based on value; Porsche shoppers want Porsches, and what matters in this context is that Porsche has built a sedan worthy of the crest.