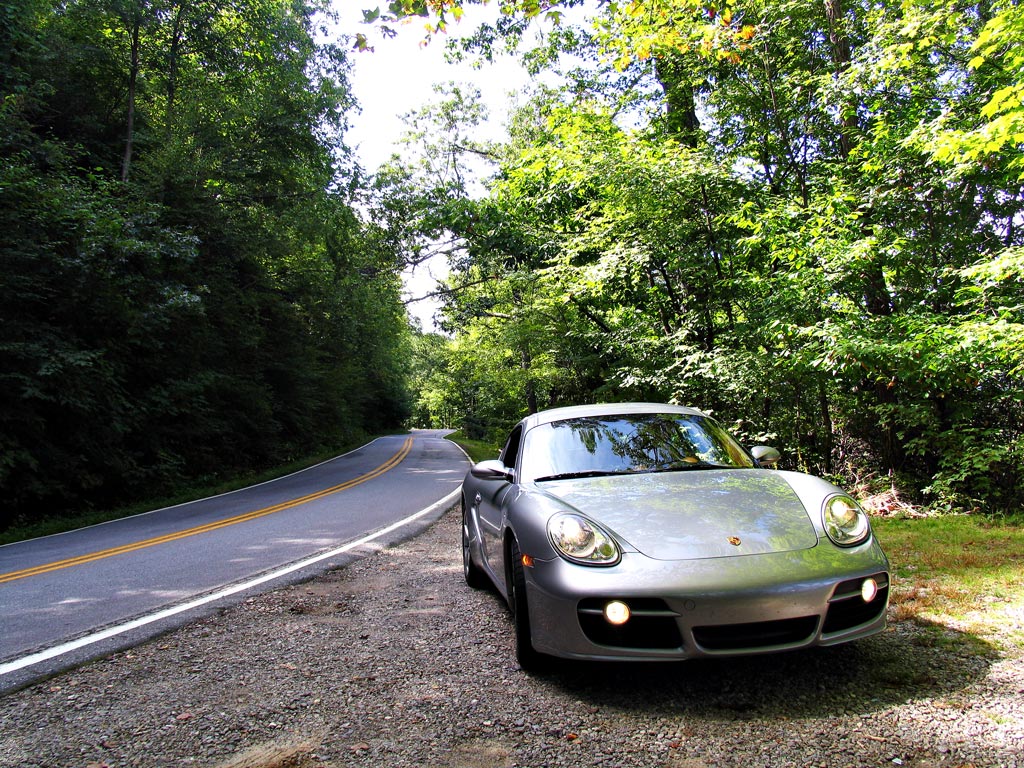 Photos by the author

The Porsche Cayman has been lauded since its introduction for its connected handling, communicative steering and sonorous, flat-six engine. There’s a certain intangible “rightness” I feel when I drive one, like the engineers over in Weissach knew exactly what matters to me as a driver and built a car to meet those needs. It’s a feeling few other cars have ever provided, including even the Cayman’s sister, the Boxster. Short of the stripped-out Spyder variant, the fabric-topped version of Porsche’s mid-engined twins has never quite grabbed me where it matters. That feeling of rightness proved so strong that a few years ago, I threw caution and financial savvy to the wind and picked up an Atlas Gray three-year-old CPO Cayman S of my very own.

That car has since moved on to greener pastures, but despite my attempt to replace it with something new and exciting, the Cayman was always there in the back of my mind. Try as I might, I couldn’t dislodge it. Even after I hastily purchased one of the most talked-about performance car in years, the 2011 Mustang GT, I still couldn’t scratch the itch. So, after a period of much classifieds-searching and recovery from new-car depreciation’s swift kick to the crotch, I swallowed my pride to slink back to the relationship I knew I never should have ended: ownership of a GT Silver 2006 Cayman S, once again with the Sport Chrono option box ticked and a remaining warranty. 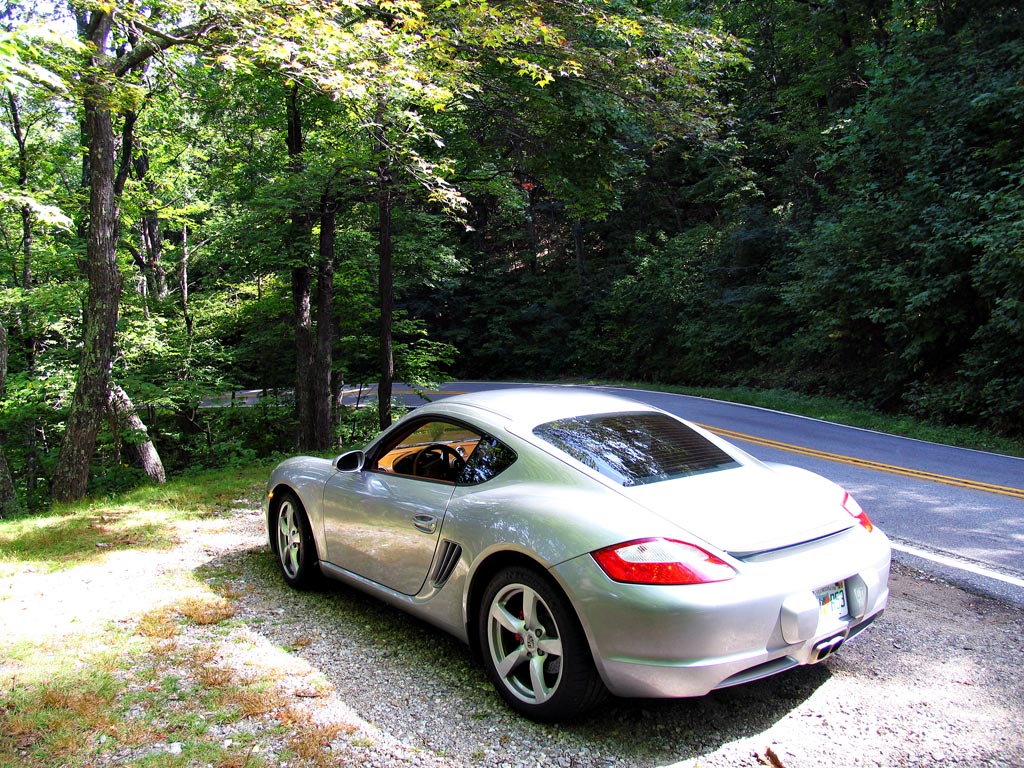 To continue the theme of reliving former glories that my new old Cayman S seems to embody, I decided to take a trip from the swampy plain that is Florida to hillier climes. Astute readers may remember a similar trip that I documented during my time with the Mustang, which is available here. Back then, I was left a bit cold by the Mustang’s detached handling and overall bulk while navigating Tennessee’s fabled “Tail of the Dragon”, a.k.a. US 129. Certainly, the Cayman would be in its element on the tight, winding mountain roads of Appalachia, living up to all the praise heaped on it by the motoring press….wouldn’t it?

Before I find out, I have to slog through over 500 miles of arrow-straight freeway with little more to occupy my time than counting trucker “massage spa” billboards. In the highway cruiser category, the Cayman is off to a bad start against the Mustang. The standard sport seats that hug so well in the corners conspire to perform tortuous Shiatsu on your lower back when trip length exceeds two hours. It’s a well-documented flaw on the Porsche boards, but that’s not doing my lumbar region any favors at the moment. The Mustang’s chairs hugged like relaxed-fit jeans, not exactly an asset in corners but very comfy over a long haul. It’s almost as if the Mustang was designed for American roads… 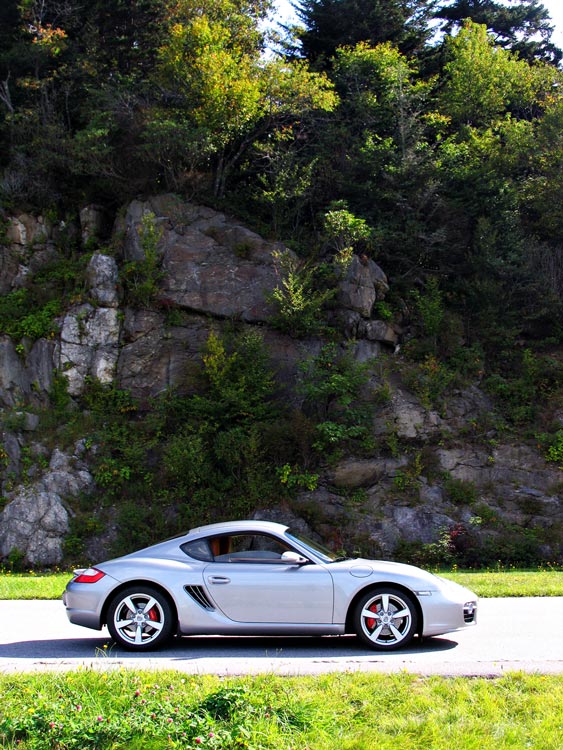 Mercifully, North Carolina arrives before I’m doubled over in agony, though just barely. A quick detour onto Route 28, a former moonshiner route, quickly erases the last 10 hours of purgatory. The road is fantastic, bobbing up, down, left and right haphazardly, only staying straight for a quick blast through a sparsely populated valley now and then. I’m working the Cayman hard, and it is absolutely sublime. Or maybe it’s working me- the grip generated by the chassis and the fresh Michelin tires is shifting my internal organs around with reckless abandon. It’s only when I reach my first stop sign in forty minutes that I can breathe and process the previous miles.

I could tell my progress was stately to say the least; that faint aroma of at-temperature oil, tire rubber and brake pad compound is a sign that I was having the kind of fun you would at a typical autocross, except this time it was measured in minutes rather than seconds. Understeer and oversteer were not on the ledger…just perfectly meted out grip and gentle four-wheel slides. Go into a tight switchback a bit too hot? The Cayman’s chassis has enough grip and poise to make up for its driver’s shortcomings. Backing off the throttle or tapping the brakes does little to upset the car’s composure. Any impending slides are broadcast loud and clear, with enough time to either sort it out or make it that bit more lurid, should you so choose. The chassis simply does not have any bad habits.

As we climb in elevation, the 3.4-liter flat-6’s bark starts to belie its bite. While it still sounds great, its punch has definitely gotten a bit softer in the thin air. Nearing a mile in altitude, for the first time ever I’m starting to wish Porsche offered the Cayman with a pressurized engine option. I never felt such longing in the Mustang, but then 5.0 liters and 412 horsepower have a way of ironing out the hills with surprising ease. At sea level, the Cayman S’  (esses?) 295 horsepower never feels like it’s going to rip your face off, but nor will you mistake the shove at your back for that of a GTI. How can I put this….it acquires speed effectively, rather than aggressively.  But the power matches the chassis well, in that it’s extremely accessible. A Cayman’s steering, handling and brakes are a joy whether you’re at two-tenths or ten-tenths. Ditto the engine and gearbox- there is such depth of character in the flat-six’s power delivery, intake and exhaust notes that you’ll never tire of them, whether you’re commuting or taming the Dragon. 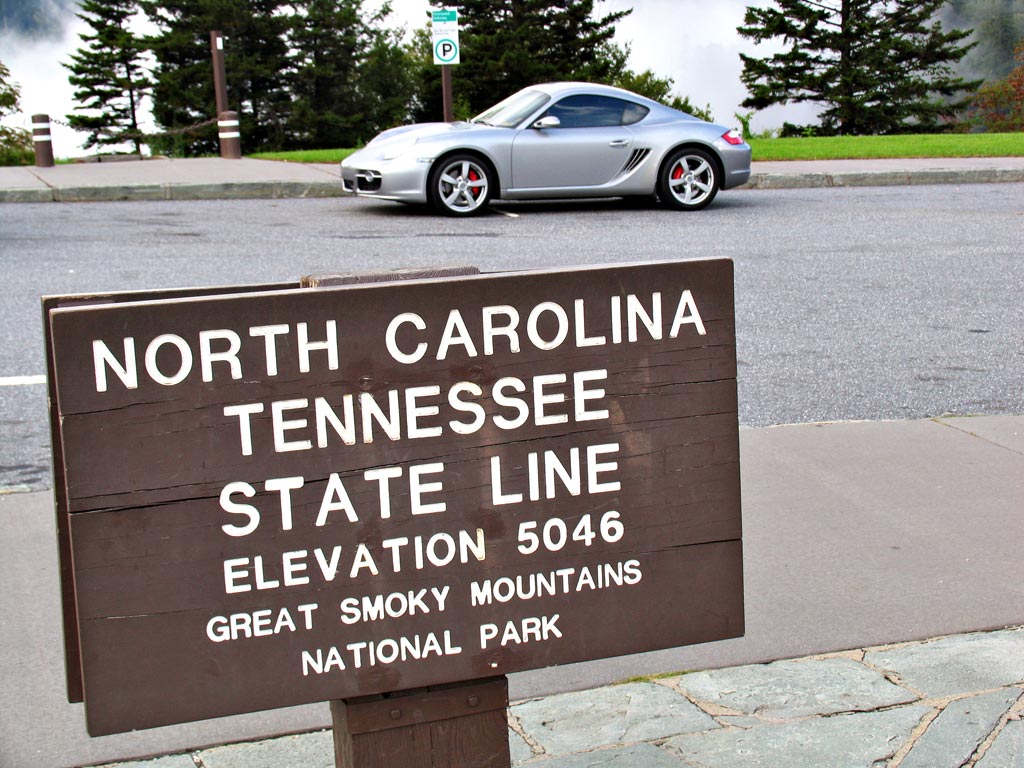 The same cannot be said of cars like the Mustang. A 5.0-liter GT at two-tenths is exactly as exciting and inspiring as a Fusion. The car only comes alive when you’re making BIG MOVEMENTS with your right foot, and hopefully not doing the same with your two hands, because when the road begins to twist you’re just biding time until the live rear axle runs out of talent. Some days I wonder if I made the right decision- buying the Cayman S in the first place, when I could have spent the money more sensibly or saved it. Or  perhaps kept the Mustang a few more years to help blunt the blow of depreciation.

Today is not one of those days.