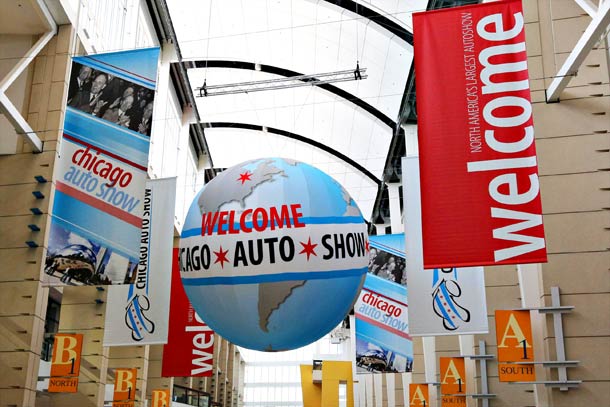 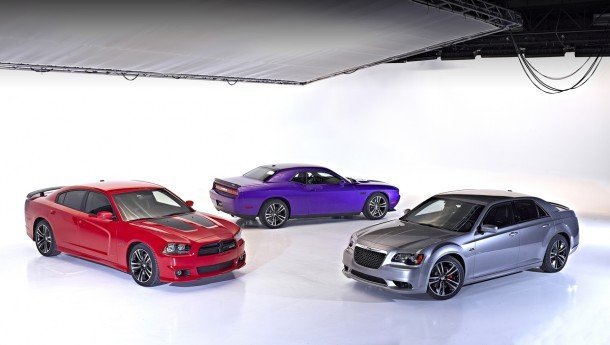 SRT unveiled two new trim packages for the Dodge Challenger SRT8 and Chrysler 300 SRT8. Called the “Core” models, each adds some blacked-out exterior trim and new badging, but what makes these new “Core” trim levels worth mentioning is the deletion of leather seating, instead substituting cloth seats with material lifted from the new Viper. This cuts the cost of the Dodge Challenger SRT8 Core to $38,995 and the Chrysler 300 SRT8 Core to $43,995 (both with a $995 destination charge).

On the opposite end of the fuel economy spread, the Chevrolet Cruze has had a 2.0L turbo diesel engine crammed under its hood. The little engine should be good for 148 HP and 258 ft-lbs of twist, which Chevrolet claims is good enough for a 8.6 second shuffle to 60 MPH. Chevrolet is quick to mention that’s quicker than the Jetta TDI DSG, although they fail to mention it’s only by one-tenth of a second, and I doubt the kind of person that would buy a compact diesel cares all that much about how fast it gets to highway speed, so long as it actually does get there. The Chevrolet Cruze Clean Turbo Diesel will start at $25,695 with a $810 destination charge. 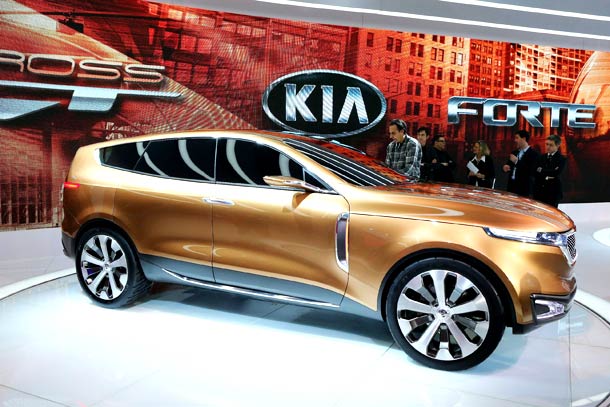 Finally, in the definition of “fluff and bother”, there’s a new concept car out from Kia. Dubbed the “Cross GT Concept CUV”, it’s pretty much what it sounds like: a Kia Soul, if you let it sit in a bowl overnight and double in size after adding the yeast. The current generation of Sorento is getting a bit long in the tooth, so probably in a year or so, we’ll see some aspects of it appear as the next generation of Kia’s crossover family hauler. 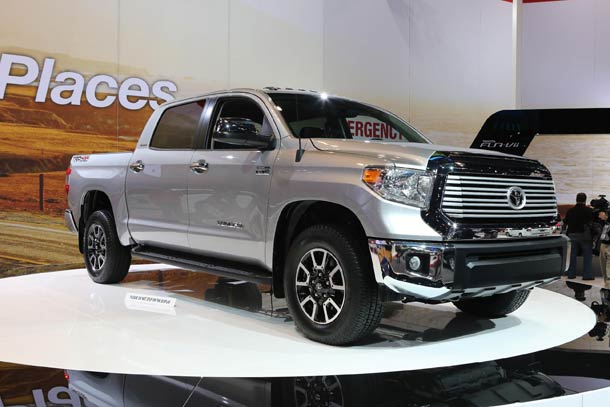 And now, the Big Headline Announcements. We’ll start off with the new 2014 Toyota Tundra! What can we say about the new, redesigned 2014 Toyota Tundra? Well…it’s certainly a truck, so I think it’s safe to assume it’ll have a bed, come in two-door and four-door versions, have rear-wheel-drive and four-wheel-drive options, and if recent events in the city of Los Angeles are any indication, it’ll be visually indistinguishable from any other truck on the road with a Japanese manufacturer’s badge on the front. Toyota’s keeping the same array of engine and transmission options from the previous truck, and it’s got essentially the same towing and carrying capacity, standard and option gadgets and safety systems. It’s a Toyota full-sized pickup, so of course there’s a trim level that’s desperately trying to collect ‘Merican Truck Cred – this time, it’s called the 1794 Edition, after the founding year of the San Antonio, Texas ranch that the Tundra plant sits on (and I’m not too sure that calling attention to the fact that an American-owned ranch was bought and flattened to build a plant owned and operated by a Japanese industrial giant is the best idea). Aside from all that, all it’s really got going for it that’s really new is side mirrors that beep and light up to let you know that your enormous truck is about to flatten some poor mope on a moped in your blind spot. Pricing on the 2014 Tundra will be announced later this year.

Volkswagen unveiled a slew of fancy new trim levels for the 2014 year at Chicago today. The GTI is getting two special editions, both of which are sure to make dealers salivate with the markup potential. First, the Wolfsburg Special edition: 2,000 of them will be sold in the US, and it gets 18-inch Laguna wheels, a retro-themed golf-ball shifter knob, and red-stitched carpeted floor mats in addition to the base GTI trim, and that’ll go for $25,095 for the manual, and $26,195 for the DSG. Next, the GTI Driver’s Edition: 3,000 will be sold in the US, and it gets…basically the exact same thing as the Wolfsburg, just with partial leather seating and some tchotchke thrown in. It’s based on the GTI with the sunroof and nav packages, and so the going rate for the stick will be $29,695 and $30,795 for the DSG. 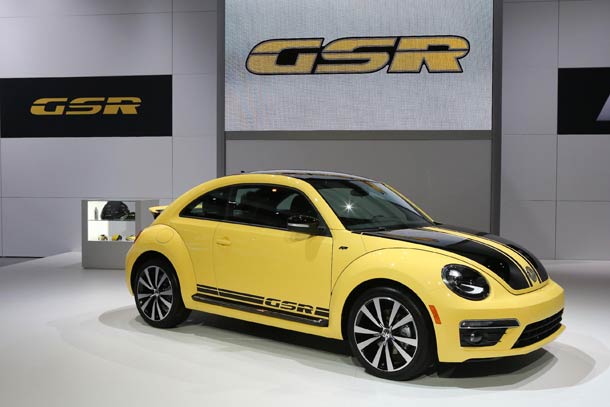 The New Beetle is getting a couple of different trim levels for the next model year as well. The Beetle Convertible Turbo is getting a R-Line performance package, which in this case means 19-inch rims, an R-Line badge on the front, LED DRL headlights, standard nav, uprated stereo and keyless entry, and some aluminum “sport-inspired” interior tinsel along with the flat-bottomed R-Line steering wheel. The much more interesting addition to the Beetle lineup is the Beetle GSR. Sporting a nifty black and yellow paint scheme, the GSR is a tribute to the Beetle GSR of the 1970’s, where GSR stood for “Gelb Schwartzer Renner” or “Yellow Black Racer”. In addition to the snazzy paint and R-Line trim, the GSR will ride on 19-inch wheels, get some unique GSR interior bits including a shift knob, and will receive the Sunroof and Sound packages as standard, as well as the 210 HP version of the 2.0L turbo straight-four. Pricing on both the R-Line Convertible Turbo and Beetle GSR will be announced later this year. 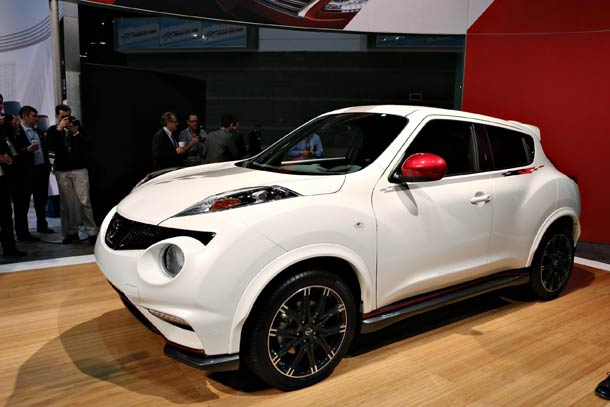 Finally, NISMO has been busy working away at Nissan’s lineup. 2014 will see another special edition GT-R, this time called the Track Edition. For an as-yet undisclosed amount of money, the GT-R Track edition will lose the back seats, but gain carbon fiber spoilers at front and rear, bespoke RAYS wheels, stiffer Bilsteins on all four corners, grippier seating and brake ducting to keep fade away on the track. 150 Track Editions will be sent state-side for sale. The 370Z NISMO showed up, sporting reworked aerodynamics, more bespoke RAYS wheels, stiffened-up suspension and chassis, lots of NISMO gubbins for the interior, and a power boost for the engine to 350 HP and 276 ft-lbs of torque. The Nissan Juke will also be receiving the NISMO treatment: fancy new wheels, a face-lift inside and out, tuned and lowered suspension, and a power boost for the 1.6L turbo four-banger to 197 HP and 184 ft-lbs of torque.

Last, and most interestingly for me, the Nissan Leaf NISMO RC rose from its grave in Chicago, after being reported dead last week. Not much new information was released: the car still is based on a one-off carbon fiber chassis, race suspension and a repositioned version of the stock Leaf powertrain. The race car does 0-62 MPH in 6.85 seconds and tops out at 93 MPH, and will coast to a stop after 20 minutes at race speed. Not exactly impressive, but no slouch for a small electric car, either. We’ll just have to wait and see if that one-off racing series goes anywhere.