It’s rare that automotive news breaks beyond the electrified razor-wire confines of niche interest, but this week we have been favored with an event of interest to the population at large. That event involves possible breaches of journalistic ethics, an oppressive and somewhat frightening level of privacy violation, and a CEO and a major national newspaper acting like spoiled children, so “favored” is perhaps not the most apt choice of words.

In case you have missed the debacle in question, allow me to summarize the events. The New York Times published a review of the Tesla Model S, written by Richard Broder, over the weekend of February 9th. The review was less than complimentary, particularly in the range department, which Broder claimed fell well short of the manufacturer’s stated figures. Tesla Motors CEO Elon Musk leapt into action on Twitter almost immediately, claiming Broder was biased against electric cars and that his review was misleading at best and intentionally incorrect at worst. The NYT fired back immediately, standing up for their writer, but things became more complicated when Musk and Tesla published the Tesla-collected charging and driving data from the Model S Broder had driven – which revealed in Big Brother-esque detail exactly how much Broder had charged the car, how quickly he was driving, and precisely where he was driving. The evidence seemed pretty damning, but Broder had some reasonably good answers from some of Musk’s challenges. The final twists in the story occurred on Sunday, when CNN followed Broder’s route in an identical Model S, and had no problems reaching the advertised maximum range. The NYT has now acknowledged that it’s entirely possible Broder had failed to fully charge his Model S, which is apparently enough to mollify Elon Musk’s temper tantrum.

Aside from those of us who enjoy watching unstoppable forces go head-to-head with immovable objects, there really were no winners in the spat between Tesla and the New York Times. The newspaper, and Broder in particular, come away from all of this with their reputation as trustworthy automotive reviewers tarnished, at the very least. Elon Musk came across even more paranoid and reactionary than when Top Gear UK bashed the Tesla Roadster, and the Model S was revealed to not only collect data on your charging and driving habits, but then sends that data back to Tesla where the company could know exactly where you’re driving at any moment – which, unless you’re a big fan of intrusive surveillance, is at least slightly disconcerting. I’d imagine that Tesla has fielded more than a few angry calls from Model S owners demanding some degree of privacy protection for their driving telemetry, and manufacturers – particularly of electric or green tech cars – might think twice before sending a demo the Old Grey Lady’s way. A sad debacle all the way around.

The debut of the Chevrolet SS seemed like it would be a good palate cleanser from the Tesla debacle. The bowtie’s first rear-wheel-drive sedan offering in the US since the Impala SS took a bow in 1996, the idea of Chevrolet getting a full-throated anti-social V8 burnout machine certainly was intriguing, however, what was launched at the Daytona Motor Speedway is, to borrow a phrase from a friend of mine, less Mad Max and more Generally Somewhat Perturbed Max. It’s certainly an attractively muscular brute, all hard angles, creases and aggressive lines. The interior continues the much-welcomed new Chevrolet trend of “trying”, and it’s got a big V8 at the front – the same LS3 from the outgoing Corvette – and big sticky tires at the back. On paper, there is absolutely nothing wrong with the Chevrolet SS – and yet, the spec sheet is shot through with places where Chevrolet has tried to round the corners off of this car for mass consumption. In between that LS3 V8 and the 275/35ZR19 Bridgestones at the back sits not a six-speed manual gearbox, but instead a six-speed automatic – not exactly a transmission for those who wish to convert the rear tires into smoke and noise, or simply hustle along at 9/10ths. That LS3 V8 is actually detuned from Corvette trim to 415 HP and 415 ft-lbs of torque, a loss of 35 HP and ft-lbs from the full-fat version. Yes, it still goes from 0-60 in under five seconds by Chevrolet’s estimation, but why the decimation (literally) of power and torque? Chevrolet says that they achieved a balance of performance and comfort with the SS, but given the softness of the suspension of Chevrolets past (save the C6 Corvette) and the softening of the spec sheet – including the lack of the words “limited”, “slip”, and “differential” anywhere in the press release – I’m concerned that the Chevrolet SS will fail to live up to its vast potential. We’ll find out in the fourth quarter of 2013. 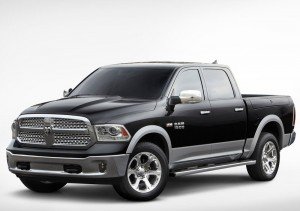 Pickup trucks, ostensibly, are about carrying and towing heavy things. This requires torque, or rotational force. Diesel engines typically produce more torque and are more fuel-efficient than the equivalent gasoline engine. Therefore, it would seem logical that diesel engines would be an option up and down the whole range of pickup trucks, however, half-ton pickup trucks have been without a diesel option for many years. This is an issue that Ram has decided to fix with their Ram 1500 EcoDiesel. Slotting a 3.0L V6 turbodiesel under the hood and mating with a eight-speed automatic transmission should certainly produce a more-than-adequate amount of torque and power, and provide for what will be certainly a difficult MPG figure to top with a gas engine. Hopefully this will lead GM and Ford to start putting turbodiesels in their half-ton pickups, but we shall have to see how it sells when it goes on sale later this year.