As is the usual case when one of the major auto shows rolls around on the calendar, the news for the week was completely dominated by the releases, unveilings and debuts at the Geneva Auto Show. Geneva, in particular, carries a certain cache about it, as not only does it engender lazy references to 1970’s rock music, but the city’s reputation for European luxury and prestige – not to mention Switzerland’s lack of presence in the automotive game – means that it is the auto show of choice for all the ultra-high-end hardware from the likes of Ferrari and Lamborghini, makers of less-famous but no less bespoke or impressive high-end European exotica like Koenigsegg and Spyker, and those that just wish to rub some of the magic sparkle that Geneva has on themselves. This show is so popular that geneva hotels are booked months in advance, full of guests excited to get into the iconic car show. 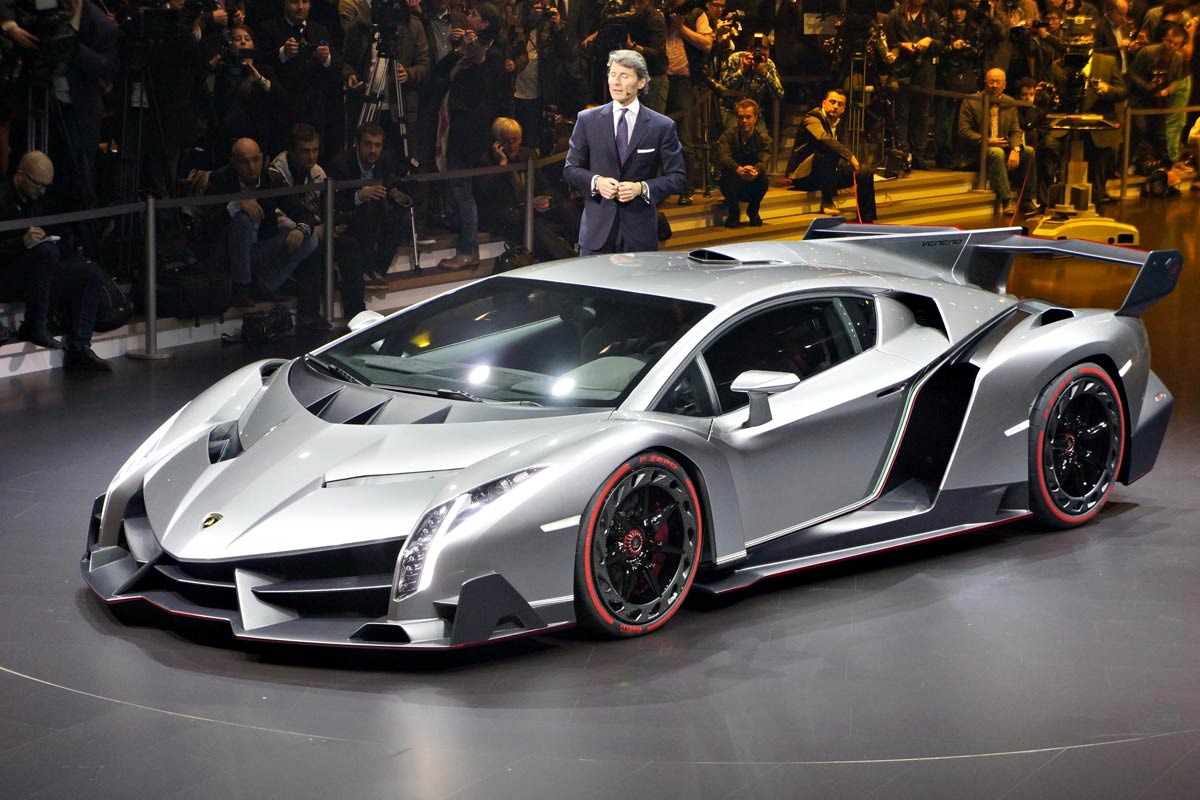 Speaking of Ferrari and Lamborghini, they both debuted headlining cars at the show this year; not just for the show, but for their lineups. The Ferrari LaFerrari and Lamborghini Veneno will both sit atop their respective ranges, and will both boast price tags squarely in the “If you have to ask, you weren’t invited to purchase one” category. While the LaFerrari is meant to be a rolling showcase of what Ferrari’s Formula 1 and road racing technology can do when applied to something street-legal, the Veneno is a ultra-limited rolling design concept celebrating the golden anniversary of the legendary marque. 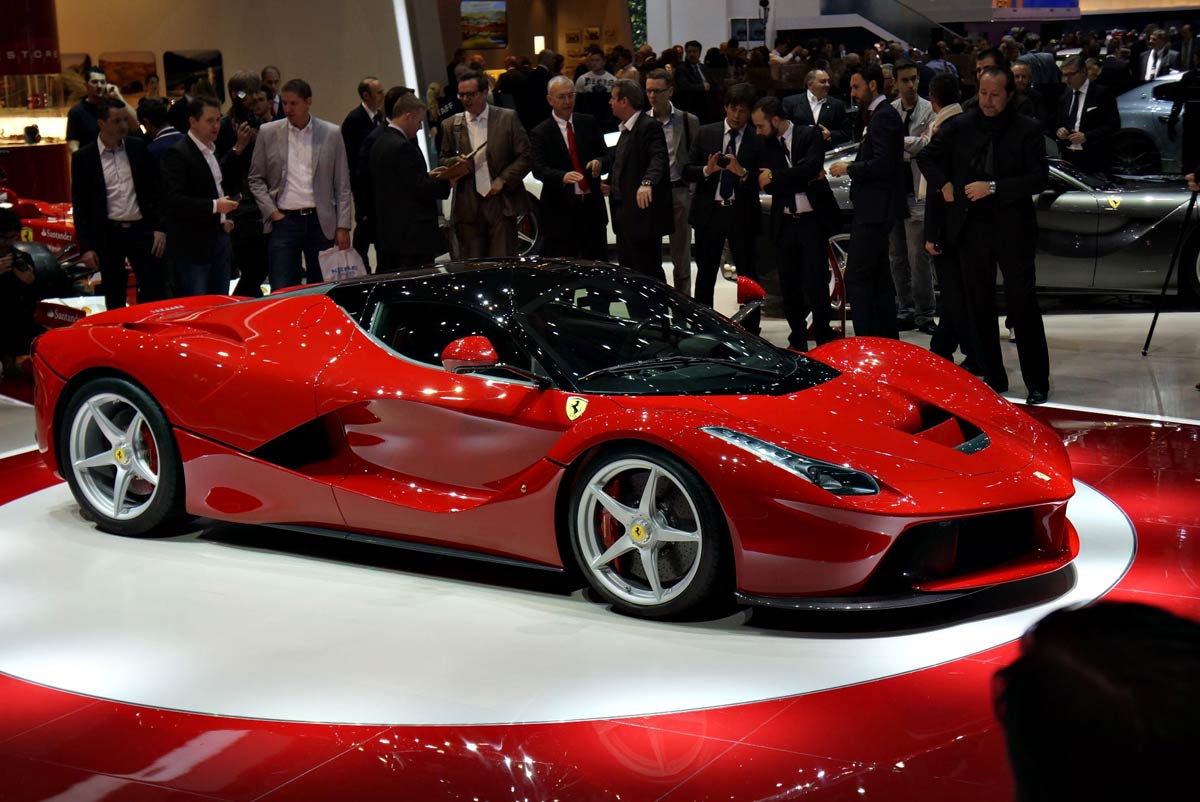 The Ferrari LaFerrari (and no, the name does not get any less dumb when translated, “Ferrari The Ferrari”) packs the most potent technological punch of the two, and the most power. Powered by a 160 HP hybrid drive electric system mated to a 789 HP 6.3L V12, the drivetrain puts out a combined 949 HP and 663 ft-lbs of torque. The whole thunderous system makes just 330 grams of CO2 per kilometer, which…certainly is an amount of CO2. Top speed is over 217 MPH, with 0-100 KPH coming in under three seconds, all of which are par for the course for a hypercar these days. Visually, it looks like a next-generation Glickenhouse P4/5, which isn’t a bad thing, but it’s not drop-dead gorgeous either, in my estimation. More information will become available later this year – not that it really matters to those that will be invited to purchase this exclusive piece of Maranello carbon fiber.

Where Ferrari’s latest range-topper goes in for F1-derived technology and the utmost honed edge of performance, Lamborghini also hews true to form and has produced a psychotically powerful hypercar with styling from 2055 with the Veneno. The name is shared with that of yet another famous fighting bull, this time a bull that killed a matador in 1914. The only things the Lamborghini version will be killing is speed limits with its 220 MPH top speed, and the environment with a 6.5L V12 producing 750 HP and no crazy hybrid-drive system. All three models that will be produced for customers have been purchased already, and at a price tag of $3.9 million, so any further detail seems rather pointless. 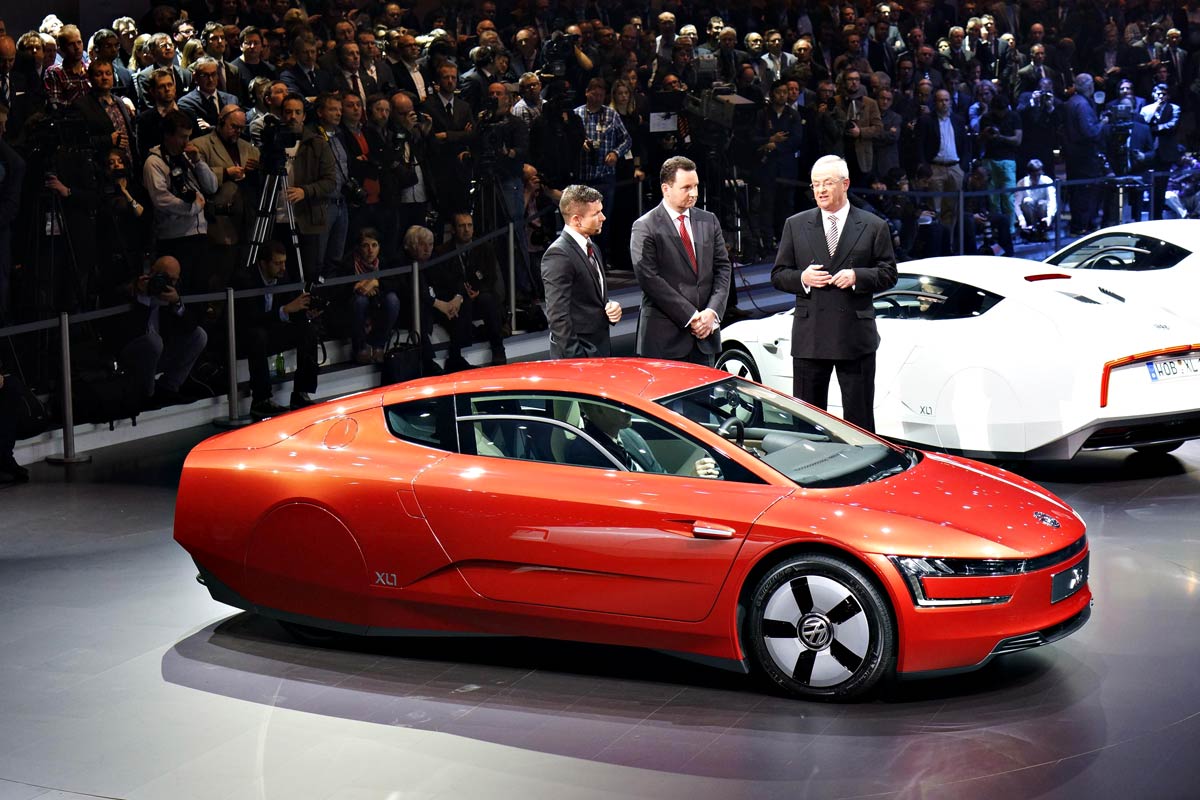 At Geneva this year, Volkswagen debuted a high-end car of their own, but focused on a very different set of numbers. VW has put out different versions of their XL1 1-liter concept car stretching back to 2002 when Ferdinand Piech drove the prototype from Wolfsburg to Hamburg, and after years of talking about building a version to sell to the public, they’ve finally debuted the real deal. The VW XL1 will be going on sale later this year, and the fuel-economy concept boasts an impressive set of specs from very different rows on the spec sheet than we’re used to. Fuel economy clocks in at just over 261 miles per gallon of diesel fuel from the 0.9L two-cylinder turbodiesel and electric hybrid drivetrain. The XL1 weighs just 1753 pounds, and with a drag coefficient of just 0.189, VW claims that it can cruise at 100 KPH with just 8.3 HP – which is good, because the drivetrain produces a meager 47 HP from the diesel engine and 27 HP from the electric motor. 0-100 KPH is reached in a breakneck 12.7 seconds, and the car is limited to 160 KPH – or 100 MPH in ‘Merican units. 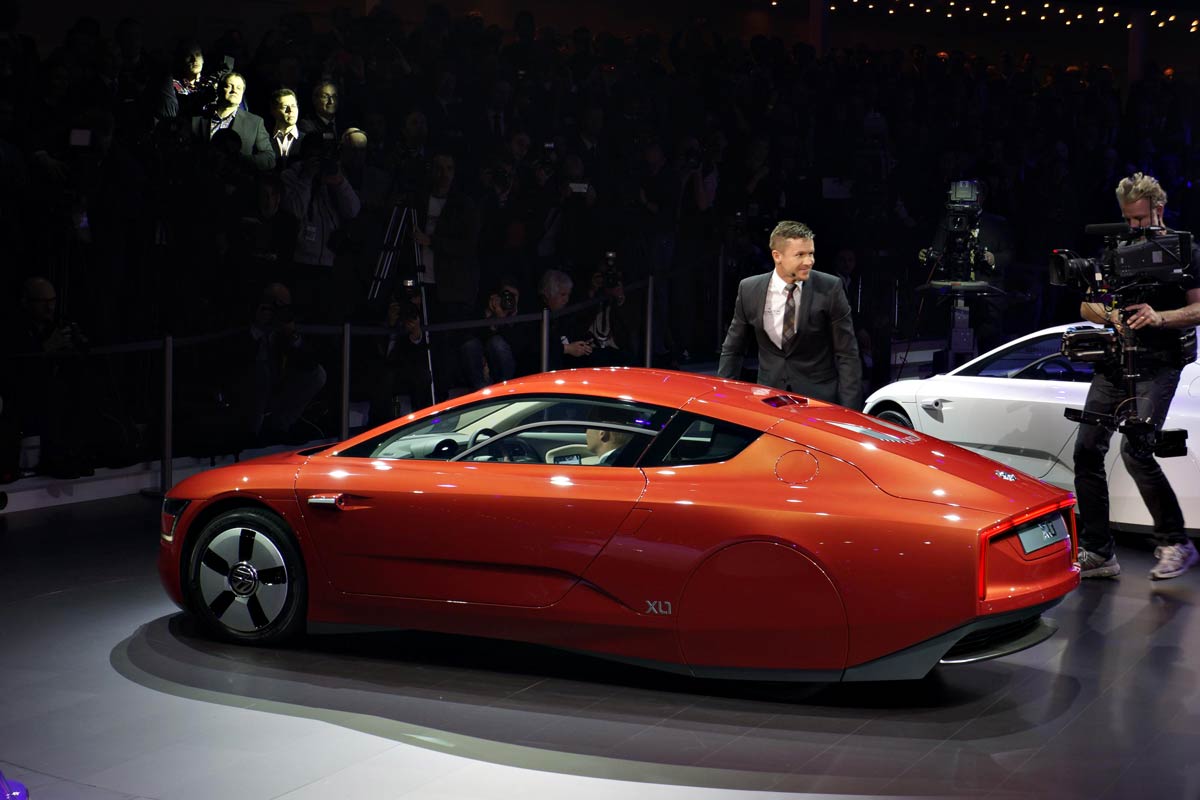 The car is obviously made almost entirely out of carbon fiber, and combined with the claimed hand-built manufacturing process, it’s estimated that the XL1 will be available in very small amounts only and cost somewhere in the six-figure range. That’s a lot of money for a car that will only seat two people, but VW is pretty up-front with the fact that the XL1 is supposed to be an angel for their ongoing efforts towards fuel economy that they’ve deigned to let us mere mortals purchase. 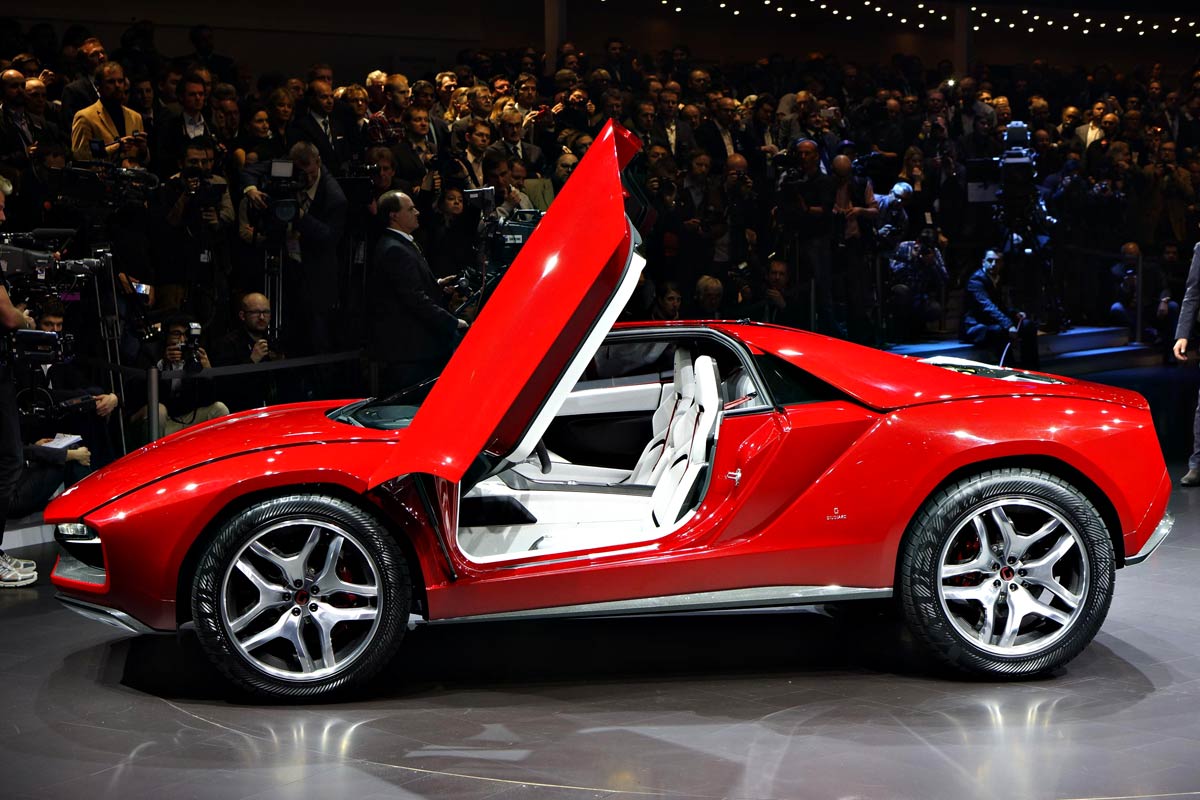 A further array of concepts debuted at Geneva – the ItalDesign Giugiaro Parcour (a Lamborghini Gallardo given a rally-inspired bodykit and lifted suspension) and Spyker B6 Venator in particular – but if I’m terribly honest, I find it hard to get excited about the debuts from the topmost shelf of the automotive world. They’re all things that no normal person will ever see, let alone touch or drive, and so the power, aerodynamics, technology and beauty all seem more than slightly pointless. I, in all honesty, have barely looked over the bulk of images that came from Geneva this year, while I’ve watched the video of the new Ford Fiesta ST being bombed around the Ford test facility in Belgium at least three or four times. That’s a car that not only regular humans will buy, but has a good chance of convincing a fair few people that cars are for more than moving yourself and your groceries around town.

And so, while their numbers are not quite so thrilling, I found the VW Mk7 GTI and Golf Variant (to be rebadged the Jetta Sportwagen in the US), and Porsche 991 911 GT3 to be much more interesting. The two variations on the Mk7 Golf – which we’ve still seen neither hide nor hair of in the US so far – aren’t all that drastically different than the previous generation we’ve got here. The new Golf wagon is apparently considerably larger than the current version on the inside, and we’ll see it in US guise later this year when the Mk7 debuts proper, and without the most interesting diesel engines, no doubt. The big change for the GTI is in the engine bay. The ol’ 2.0L turbo straight-four is being upped to 217 HP standard, and a new “Performance” engine level is being added that ups the power to 227. It’s not much, but those ten ponies are enough to shave a tenth of a second off the 0-100 KPH time (6.5 versus 6.4 seconds), and add another 3 MPH to the top speed (152 to 155 MPH). 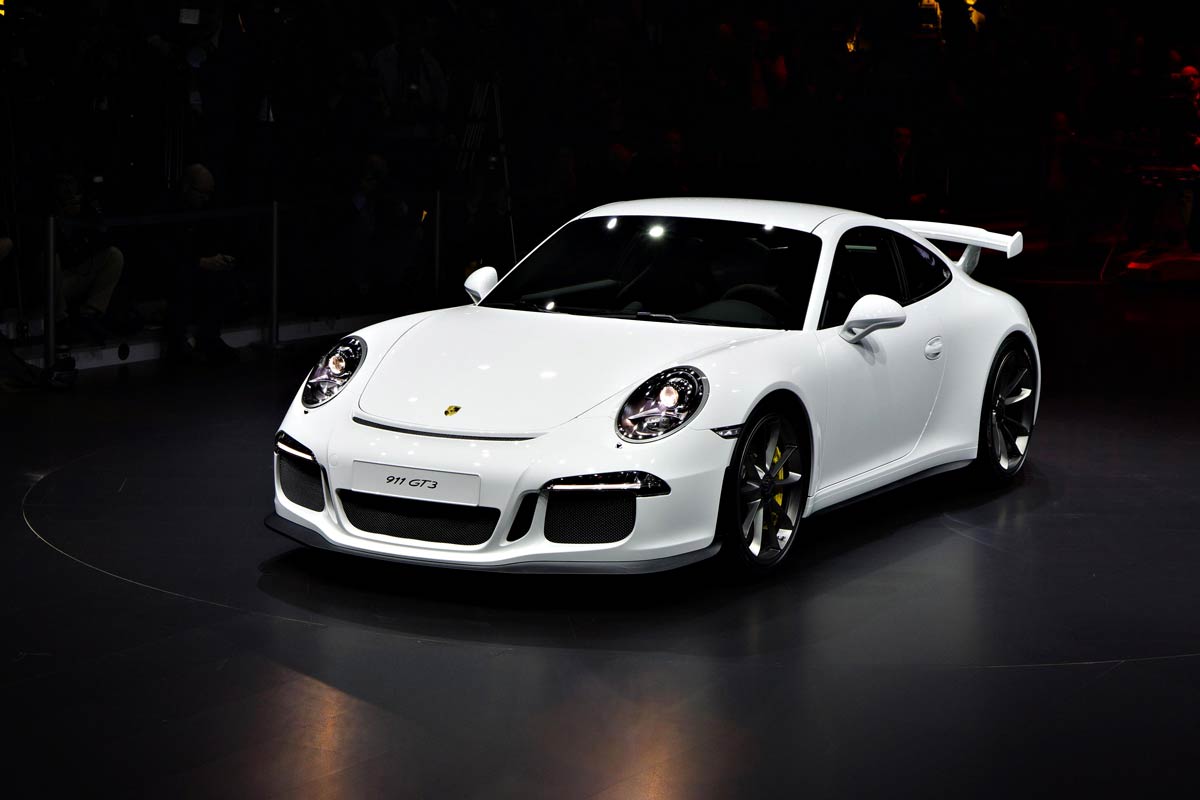 And, of course, a new 911 GT3 is an item of interest no matter where it debuts. The purest form of 911 that won’t try to shove your spine up into your skull, the brand-new 911 GT3 is where Porsche’s racetrack-inspired efforts usually show up first, and this version is no exception. The new toy for the 991 911 GT3: four-wheel steering, which I’m sure will only marginally increase the maintenance costs for that rear axle assembly. Powered by a 3.8L version of the 911 straight-six, the GT3 will have 475 HP and 324 ft-lbs of torque on tap, and do the 0-60 shuffle in 3.3 seconds and top out at 195 MPH. Tri-pedal extremists need not apply, however, as the new GT3 will only come with the 7-speed dual clutch Porsche Doppelkupplung transmission. Still, for those of you with $131,350, plus transport costs, plus extras, plus inevitable dealer markup burning a hole in your pocket at the end of 2013, it’s hard to find a better pure driver’s car than a 911 GT3. 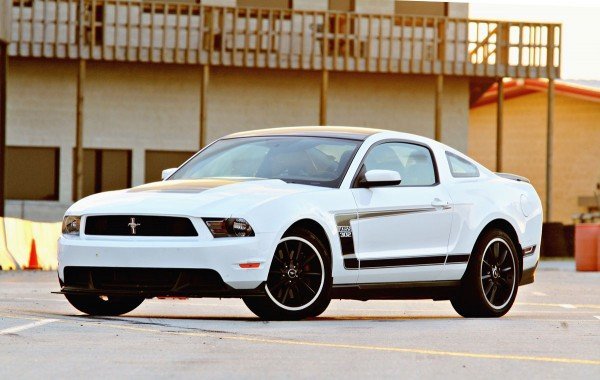 Finally, a bit of non-Geneva news. There’s been a slight kerfluffle in recent days about the next generation of Ford Mustang getting – horror of horrors – a four-cylinder turbo mill as an option. Initially, this was thought to be a Europe-only option, as our big American V8s would go all shock-and-awe on delicate Euro constitutions, not to mention rack up a gas bill higher than the PIGS nations’ foreign debt. However, Road & Track claims to have confirmed that not only will the next Mustang come with a force-fed four, but it will be offered in the US as well. R&T claims that the 2.3L EcoBoost four will actually sit in the middle of the power range, above the 305 HP 3.7L V6. This meshes with reports of that same 2.3L turbo mill being planted in the upcoming Ford Focus RS in possession of 350 HP, placing it above the base V6 but below the 412 HP 5.0L V8. While old Mustang traditionalists might howl, a turbo four Mustang makes much more sense when you consider that thanks to the success of the Mustang in drift competitions around the world and the wealth of inexpensive performance parts for the Mustang platform, it’s become one of the new darlings of the import tuning crowd as well, who certainly know their way around a forced-induction straight-four. We’ll just have to see if this new marriage of four-cylinder power with old-school ‘Merican pony car design is worthwhile when the next generation Mustang drops.