For the past few model cycles, Lexus has made a push to revitalize its image with enthusiast shoppers. Like the folks at Cadillac, the Lexus marketing team likely sees sportiness as a means to attract affluent young buyers away from BMW and Audi. How effective that strategy is, I can’t really say, but if it means Lexus continues to build cars like the refreshed Lexus IS-F, then I think the real winner is the enthusiast buyer.

In this piece, we’re going to look at two flavors of the midsized Lexus: The GS350 F-Sport and the GS450h. If we’re going to evaluate the GS properly, we need to answer three big questions. First: In a vacuum, is it fun to drive? Second: Does it sacrifice luxury in the name of sporty driving? And third: How does it compare to its peers, specifically with its closest analog at Infiniti? Let’s get started.


When the GS350 F-Sport was announced, I must admit I felt a bit cheated. I wanted Lexus to build a GS-F in the tradition of its smaller sibling. I wanted V8 power, a trick transmission and track-oriented goodies. While they may yet build such a car, the F-Sport is not it. There’s no power bump: the 3.5L, 306-horsepower V6 carries over from the base GS350. In fact, what you get is quite similar to a BMW M Sport or Audi S-Line package: fancy wheels with summer tires, big brakes, some aero goodies and some performance-tuned chassis bits. I’m sure the similarity to the Germans’ offerings is no accident. On the plus side, Lexus throws in variable-ratio (not to be confused with variable-effort) steering, which is a bit of a killer app for this segment. We’ll come back to that.

The first thing I noticed after climbing into the GS was the seating position. You sit high up in this car. I’m used to that sensation after many years of driving cars built on the Ford C170 and C1 (Focus) platforms, but it feels strange here. I’m sure the desired effect is the same (Ford called it “command seating” for a reason) but it’s a bit odd since it makes most other large cars feel low-slung by comparison. It’s a distinctly truck-like orientation, which some drivers may appreciate, but it doesn’t quite harmonize with the F-Sport’s more aggressive edge. Being low in the chassis gives you a better sense of a car’s center of gravity, and helps your body interpret weight transfer more effectively. In simpler terms, you don’t feel like you’re sitting in the car, but on the car. Picture a stagecoach driver, perched high over his horses with an excellent view of his surroundings.

Any GS equipped with the Luxury or F-Sport package gets Drive Mode Select. If this sounds a lot like Audi’s “drive select,” that’s no accident. Like the Audi system, Drive Mode Select allows you to alter the steering, suspension and throttle depending on your desired level of aggression (or lack thereof). Unlike Audi, however, Lexus constrains you to presets: ECO, EV (hybrid only), Normal, Sport S and Sport S+. Little explanation is really needed here. ECO is the least aggressive, most fuel-friendly setting. Sport S+ hardens the electronically-manipulated Active Variable Suspension and tightens up the throttle and steering effort. Normal and Sport S fall in between, and I’m sure you can interpret the progression. 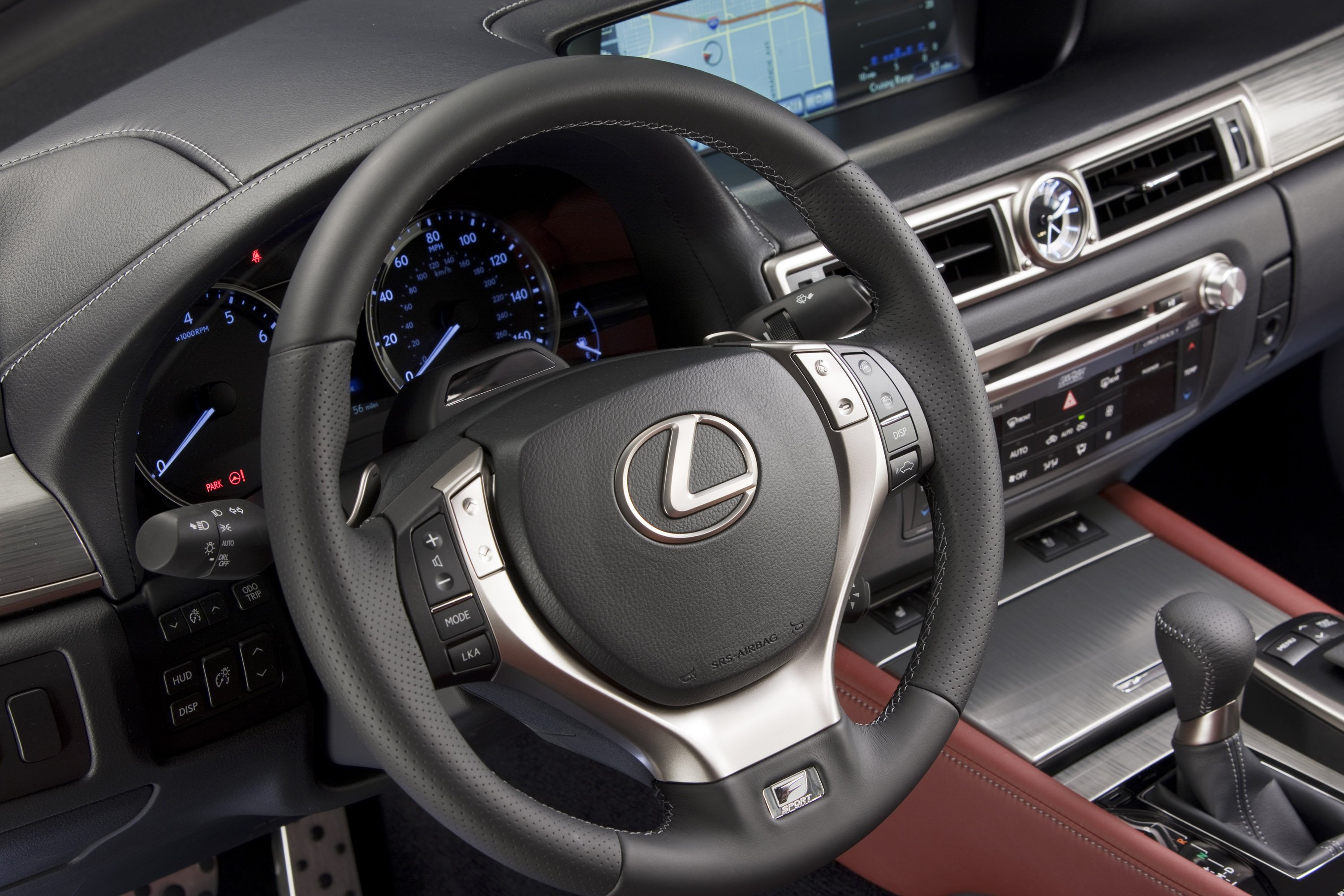 The F-Sport’s “normal” suspension setting is already augmented by the 19” forged wheels that come standard with the package. It’s a bit disjointed, as the larger wheels are eager to give feedback which the suspension is equally eager to ignore. Higher-frequency impacts, such as the thwack of an expansion joint or the pop of a solitary pothole, are heard and even sometimes felt, but the bulk of incoming information is filtered out.

As you dial up the aggression, the feedback comes through more clearly, but even in the sharpest Sport S+ setting, you feel like the tires are writing checks that the chassis can’t cash. At one point, while experimenting with the Drive Mode Select, I hooked a right turn on to a state highway from a standstill with the stability and traction control disabled. The engine roared, the rear end slewed out to the left and my mirrors filled with tire smoke—sure signs of traction loss—but I couldn’t feel what was happening. I couldn’t really hear it, either. The amplified engine noise (real, via a noise pipe, not synthetic) overwhelmed the rear tires’ pained cries for mercy. I grinned anyway. Kicking up big clouds of vaporized rubber in a Lexus? Yeah, count me in, even if the tactile feedback could be better.

On the go, the GS acquits itself fairly well. Between the high seating position and the comfort-first suspension, this isn’t a dedicated sports sedan, but it’s certainly more engaging then previous iterations of the GS, and more fun to toss around than, say, an Audi A6.


Both of our GS testers were loaded to the proverbial gills, so the noteworthy differences are found when evaluating the drivetrain and suspension. The former is rather self-explanatory. The 450h employs Lexus’ revised dual mode hybrid system, boosting the 3.5L V6 to 338 total system horsepower and an unspecified torque figure. Lexus claims the combination is good for a 0-60 time of 5.6 seconds. That’s not bad for a 4,200lb luxury car, but if you believe Lexus’ own literature, even the GS350 will do it in 5.7. 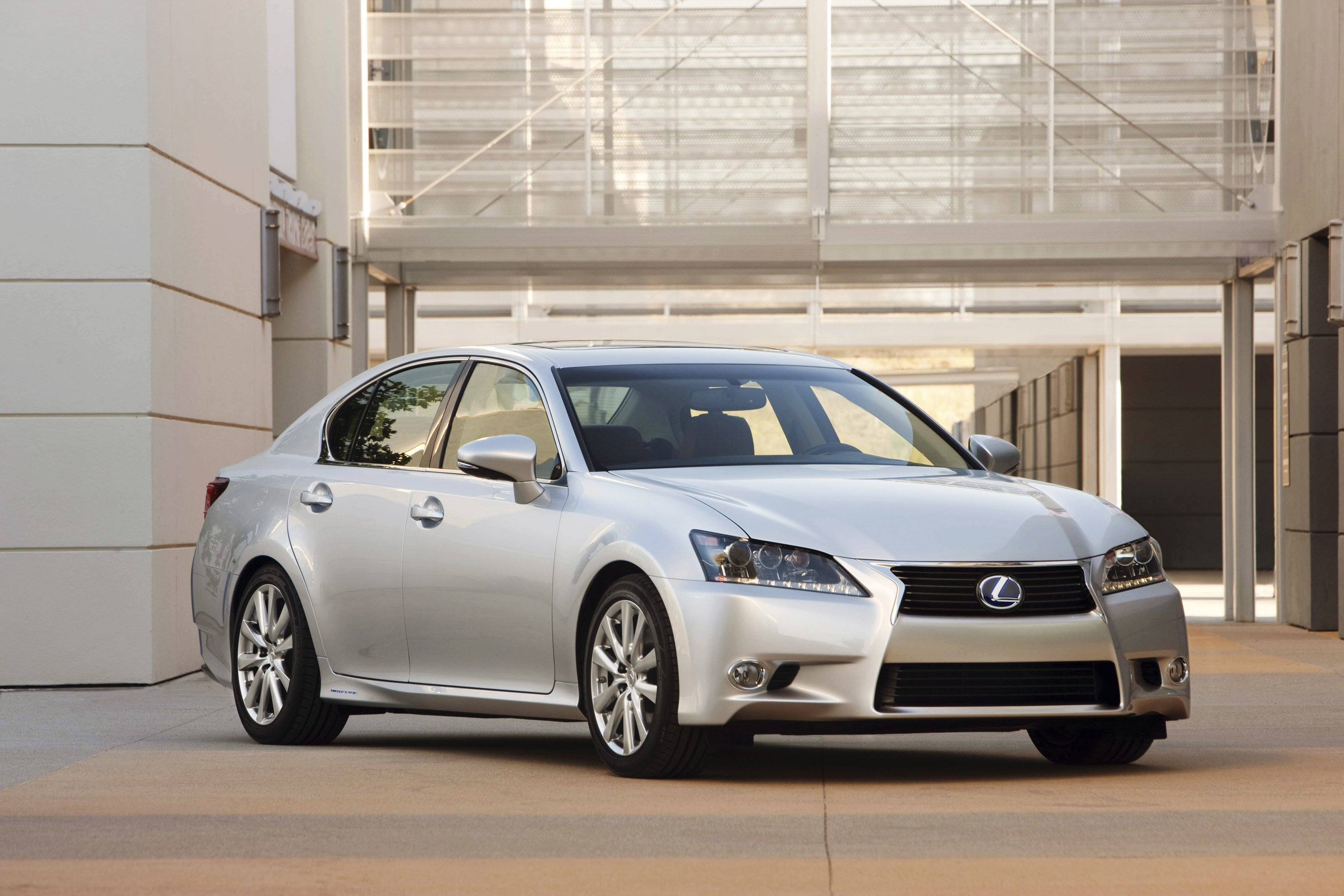 When the GS450h was introduced for the 2007 model year, it was an alternative to the existing V8-powered car and it offered nearly identical power without a mileage penalty. Now, however, there is no V8-powered GS. The hybrid is the range-topper, which makes a certain amount of sense. The only true penalty is complexity, but given the proven reliability of Toyota/Lexus hybrid powertrains, that’s not much of a penalty at all.

Since the F-Sport package isn’t even an option on the GS450h, it more faithfully executes the luxury formula than does its brasher, less expensive twin. The most notable dynamic difference between the hybrid and the F-Sport is the absence of the latter’s variable-ratio steering. The Sport S + mode in both cars increases steering effort, but only on the F-Sport model does the ratio change. What you get is a heavy car with heavy steering. Heavy steering without additional speed is somewhat pointless, I think, and since you can’t alter those characteristics individually, you’re stuck with it if you want the other benefits of Sport S+ (aggressive throttle and firm suspension).


Infiniti’s midsize luxury car is often faulted for being short on said luxury when compared to the competition, but with Lexus’ renewed interest in attracting driving enthusiasts, it’s only fair to compare these cars based on their ability to bring a smile to the face of today’s cynical buyer. If you follow SSL, you know we’ve come away impressed by the V8-endowed M56 and the M hybrid in the past. How does the new GS compare? 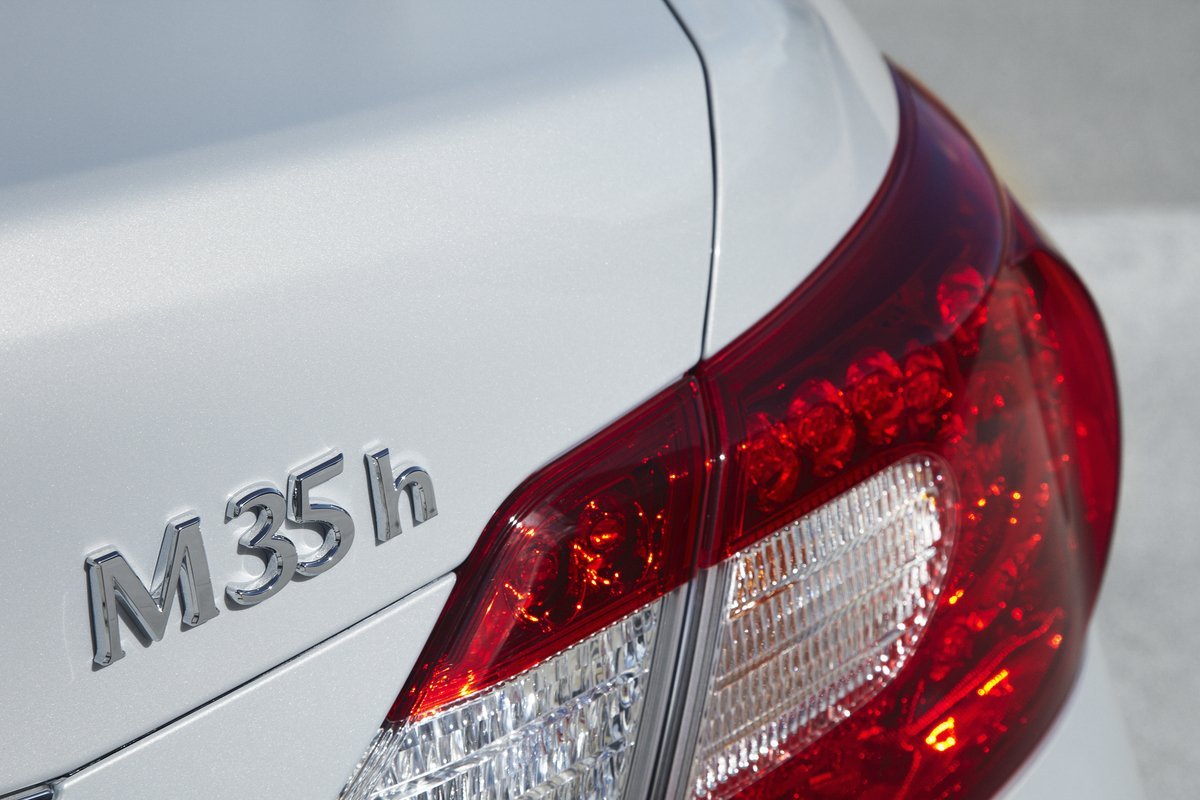 The two match up pretty well on paper, with the M offering a bit more power in both trims (330hp vs. 306 in base trims; 360hp to 338 in hybrid guise) and carrying a bit less weight as a hybrid (~100lbs). The M hybrid feels a good bit quicker than the GS450h, and probably is. Without instrumented testing of the two back-to-back, it’s hard to say for certain, but in terms of feel, the Infiniti gives you the shove in the back you’d expect from a V8. The Lexus, with its ECVT-based drivetrain, delivers calmer, more luxurious acceleration. There’s still plenty of it, but the authoritative kick one expects from a V8 or V8 alternative is conspicuously absent. I’ve said before that a well-executed CVT is the future of luxury transmissions, and Lexus illustrates my point flawlessly. But there’s something to be said for a more traditional automatic in a sporting sedan, and the M’s 7-speed is exactly that. Mated to the electric drive by a clutch, the more conventional ‘box delivers gear changes quick enough for spirited driving and offers the familiarity that the paddle-selected ratios in the Lexus can’t quite match.

Once underway, the dynamic strengths and weaknesses of both cars are obvious. The M’s ride is firm—at times probably too firm for luxury-oriented buyers –but communicative. Super-wide tires (even the base 18” wheels come with 245mm high-performance all-seasons) are mostly to blame for that, but the suspension tuning is firmer too, and we haven’t even factored in the Sport Package yet. The GS350 F-Sport gets 235/265 staggered tires on 19” forged alloy wheels, hence the extra feedback from sharper impacts, but the softer suspension tuning keeps the ride on the luxurious side, even with sportier modes engaged. 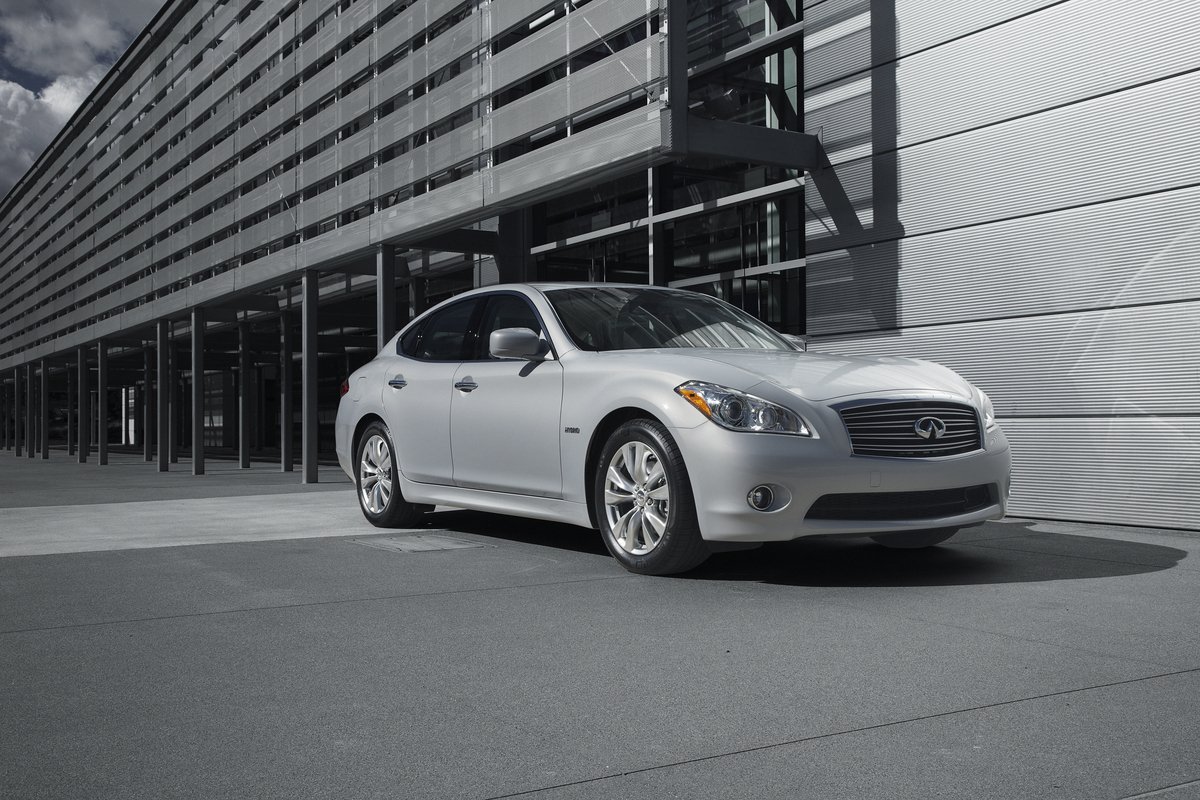 But as comfortable as the GS may be, Infiniti’s chassis tuning gives the M the edge when the road starts to wind. The M corners flatter and bites better, and when things get squirrely, the feedback from all four corners is far less muted. The low-slung seating position helps you push the M harder and more precisely, feeding information to your senses that you can use to place it exactly where you want it on the road. The M37’s more high-strung VQ V6 doesn’t quite have the silky smooth character of Lexus’ 3.5, but it is willing and able to rev. You’ll welcome the ability to wind it out too. Despite the 3.7’s displacement advantage, it actually produces less torque than Lexus’ direct-injected offering.  You’ll pay for those extra revolutions at the pump, however. The 3.7L is thirstier, too.

To the credit of both manufacturers, the GS450h and the M35h are both as honest as hybrids come. Both returned almost dead-on the mileage stated on their stickers, the M hovering around 27-29mpg and the GS almost unwaveringly at 30mpg. ECO mode was acknowledged, but never used. Make of that what you will. And fear not, the M Hybrid will roast its tires as eagerly as the GS450h will, but the chassis communicates well enough that you can control the progressive break-away in the all-season rubber and turn a pointless burnout into a glorious, rubber-shredding launch more worthy of a Dodge Challenger than a Japanese executive sedan–a hybrid executive sedan.

For the individual who prioritizes luxury and fuel efficiency, the GS is the car to buy, especially in hybrid guise. When it comes to having fun, though, the Infiniti steals the show. Neither of these cars is perfect; both are compromises. The most important take-away here is that the GS no longer asks you to compromise on your enthusiast desires nearly as did previous generations. It may not be the star athlete in the segment, but in all but the most demanding of circumstances, it can certainly keep pace with its peers.

Lexus provided the GS350 F-Sport and the GS450h for review. Infiniti was not asked to provide a car for comparison purposes, and all references contained are based on prior loans/reviews by the author.